NOTEBOOK: Women’s Soccer Improves to 4-0-1 ahead of Final Pre-Ivy Matches, Best Start since 1996 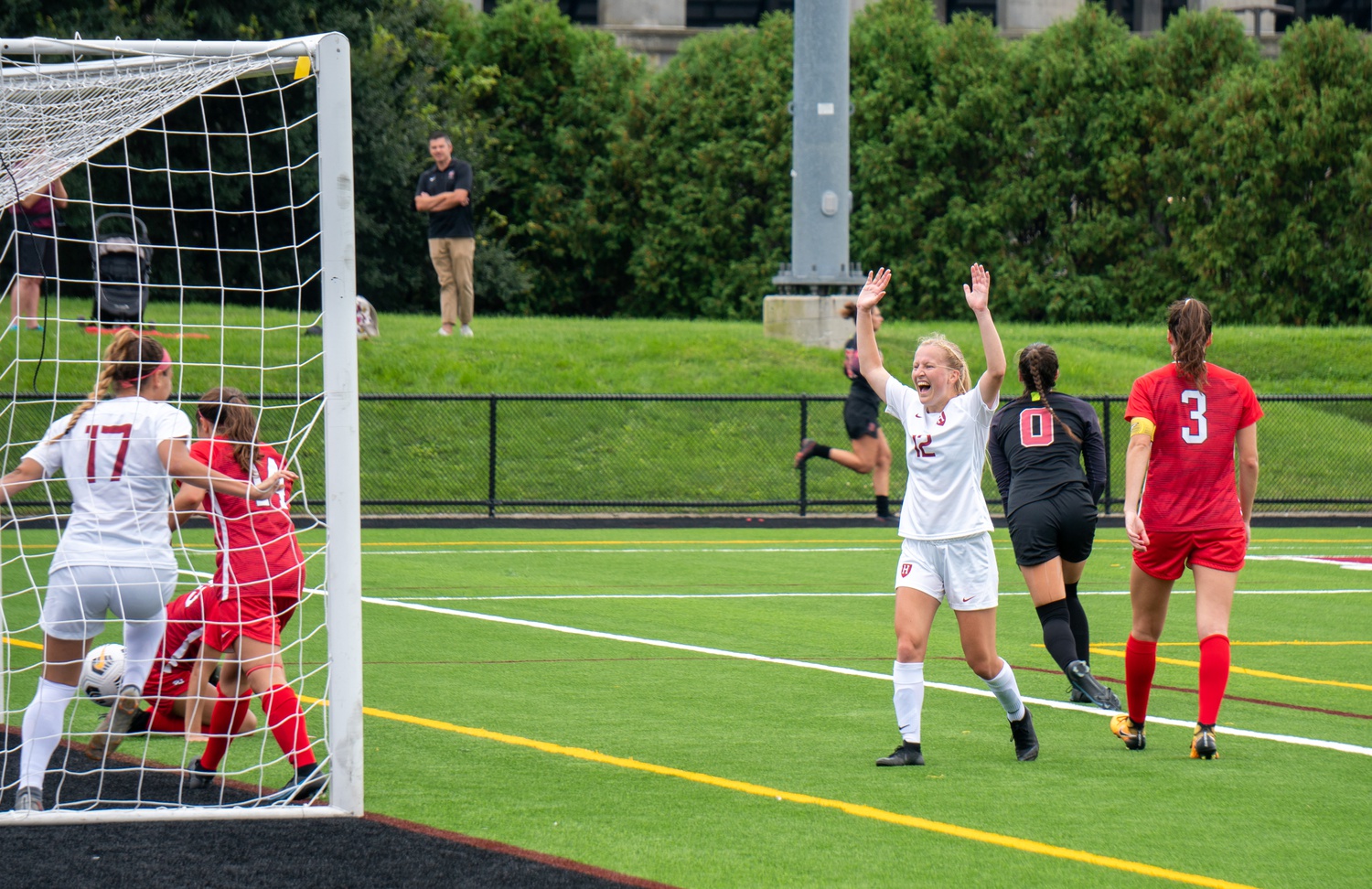 Sophomore defender Taylor Fasnacht scores on the way to a 3-2 Crimson victory against St. John's on Sept. 5. Since the victory against the Red Storm, Harvard has drawn once and won once to maintain an undefeated record. By Zing Gee
By Lev Cohen, Crimson Staff Writer

Harvard continued its solid start to the season on Sunday, defeating Monmouth 4-1 in New Jersey. The Crimson got two more goals from junior standout Angela Caloia, who now has five tallies in five games. Senior forward Murphy Agnew chipped in two goals of her own, opening the scoring in the 25th minute and closing it in the 86th. The Monmouth match marked the second game of the week for the Crimson, who tied Power-5 opponent Boston College on Thursday in a back-and-forth game that saw multiple lead changes, six second-half goals, and a pair of scoreless overtimes immediately after the goal frenzy.

With just two games separating Harvard from its Ivy League opener against Penn on Sept. 25, now is a good time to take a step back and consider the Crimson’s performance in its first five games. Harvard remains undefeated through five games for the first time since 1996, a season in which it went 15-2-0 overall and won all seven league games. It is an encouraging start to the season for a team with serious hopes of winning the Ivy League. Here are some takeaways from the opening few weeks of the season.

Given the strength of the two recruiting classes the coaching staff has brought in since this team last played in 2019, it comes as no surprise that many of the underclassmen have immediately staked claims to major roles on the team. Four of the team’s six leaders in minutes are first-year players: center-back Jade Rose, midfielders Hannah Bebar and Josefine Hasbo, and forward Ainsley Ahmadian. Bebar scored a fantastic game-winning goal against St. John’s, while Hasbo, a Danish international, is already one of the Crimson’s most important players, buzzing around midfield, orchestrating attacks, and making well-timed runs into the box like the one that netted her a goal on Thursday against Boston College. The talented first-year players make Harvard a better all-around team than it was in 2019, and the improvement may accelerate as the Crimson’s underclassmen continue to settle in.

While Harvard has had some inconsistent performances, the one constant has been its tendency to rack up shots. The Crimson has outshot its opponents 96-33 in five games, or about 19-7 in the average game. Many of these shots have come from outside the box, and after the St. John’s game, head coach Chris Hamblin spoke about the difficulty of generating good chances against a team willing to sit back and soak up pressure.

“When they have a lot of numbers around their defensive area, you’re not going to get many clean-cut chances,” Hamblin said. “So we’ve got to work to move the ball out quicker to open them up a little bit.”

In the Boston College game, Harvard showed some signs of being less stagnant in the attack. First, Ahmadian picked up the ball in midfield, drove at the defense, and delivered a perfectly weighted through ball to Hasbo, who needed only to slot the ball past the Eagles’ goalie. Then, it took just three passes from Harvard’s defense to cut open Boston College’s defense and give Agnew a chance to finish from point-blank range. This was a marked change from the start of the season when the Crimson fired 22 mostly low-percentage shots at the Fairfield goal and only notched a single tally.

Bebar and Ahmadian have combined to take 32 shots, 16 on target, but have scored only one goal (Bebar’s golden goal against St. John’s). As their scoring chances continue to mount, odds are that the lifelong friends and Chicago natives will break through and find the scoresheet. Add that to the goal per game from the center forward Caloia and the dynamism of Agnew and Hasbo, and this Crimson group can quickly become a team that will threaten its opponents in a variety of ways.

While the Crimson’s attack has improved recently, defensive questions remain after the team gave up two set-piece goals to St. John’s in the second half and then shipped three more second-half goals against Boston College. At its defensive best, Harvard is stifling, pressing hard and forcing turnovers in possession after no more than two or three passes. In the first half against St. John’s, the Red Storm rarely possessed the ball for more than a few seconds and struggled to sustain possession in the Crimson’s final third.

But in the second half, as St. John’s began to come out of its defensive shell, Harvard was not able to keep up the defensive intensity, instead beginning to cede territory and possession in midfield. The Red Storm managed seven shots in the second half after taking just two in the first. For the most part, the Crimson still kept St. John’s from creating dangerous chances — the Red Storm’s two goals both came off of corner kicks, which is a separate issue for Hamblin and his coaching staff to address. It is also not realistic to expect high-level pressing over the course of 90 minutes, but Harvard can probably find a better balance. This is especially true given that the best Ivy League teams will likely offer far more going forward than most teams Harvard has played so far this year. The Crimson has tended to field attack-minded lineups so far this season, but Harvard will have to be careful to remain solid at the back if it does not want a repeat of 2019’s four goals conceded to Brown.

The Crimson’s strong start is worth putting into some Ivy League perspective. Harvard’s biggest competition in the league could be Brown again. The Bears return seven of the nine players who started at least 15 games in 2019, including the dynamic attack of Ava Seelenfreund and Brittany Raphino, whom Crimson fans might remember from their impact on Brown’s 4-2 win at Ohiri Field in 2019. And while Brown has taken two losses already, they have come against Hofstra and Notre Dame, two teams that receive votes in the Top 25 and are probably better than anyone Harvard has played. The schools play one common opponent before the league schedule kicks off: Northeastern, whom the Crimson plays this upcoming Wednesday before Brown does next Sunday. The respective results this week might provide a small hint as to the relative strengths of 2019’s Ivy League champions and runners-up. In any case, the teams’ matchup on October 16 stands out on the calendar as the Ivy League season approaches.

Princeton is the other team to look out for this season, especially after a victory over No. 9 Rutgers earlier this week in Piscataway, N.J. The Tigers are undefeated heading into a Thursday matchup with Hofstra. Like Harvard, Princeton has some promising underclassmen who have made instant impacts, making the Tigers something of a dark horse in the Ancient Eight title race.