Twenty years after the attacks of Sept. 11, Harvard affiliates recall what campus was like following the news of the attacks on the World Trade Center, the U.S. Pentagon and the hijacking of four planes.
By Raquel Coronell Uribe and Kate N. Guerin 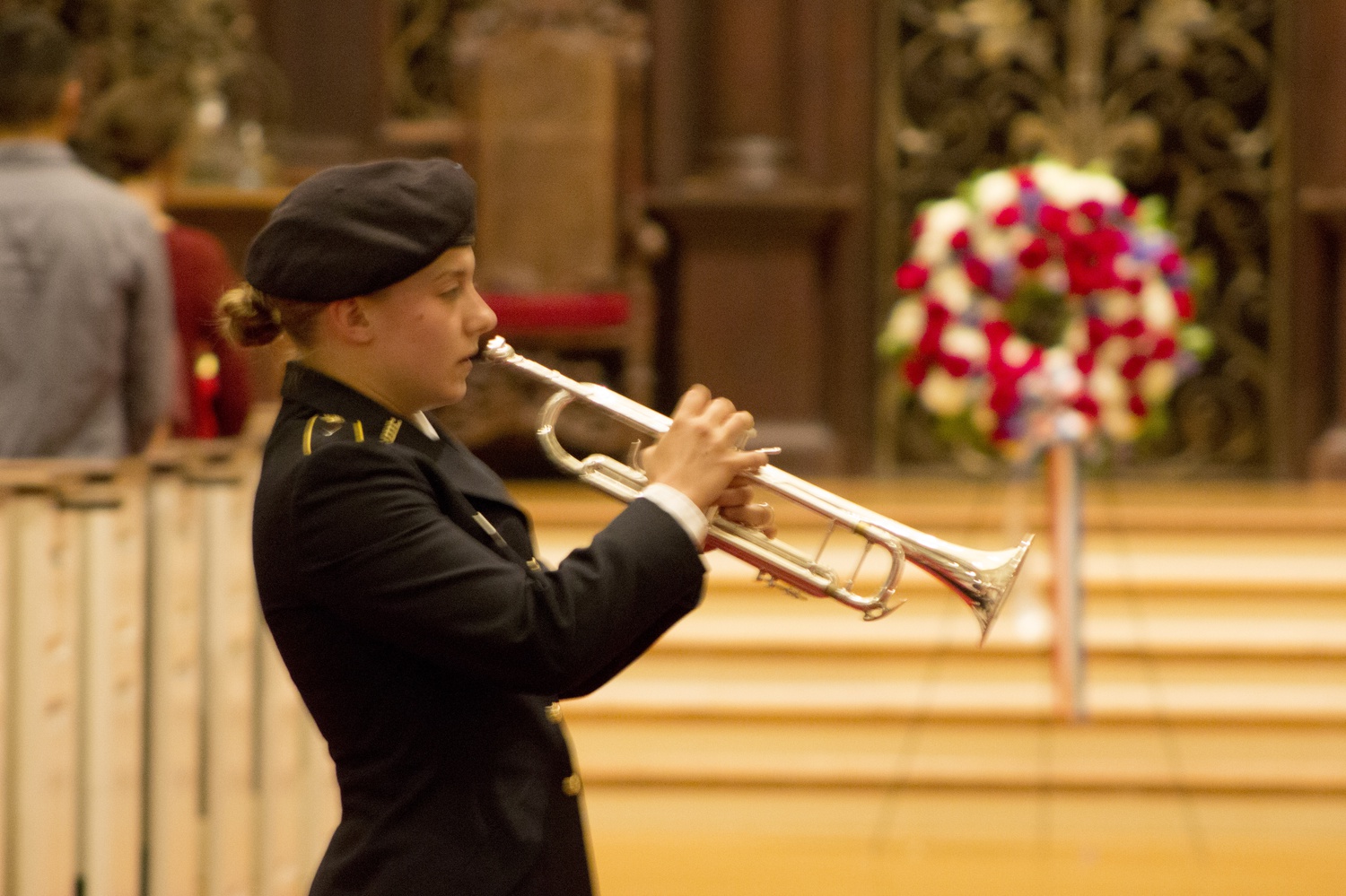 A 2015 memorial service at Harvard for those killed during the 9/11 attacks. By Sidni M. Frederick

It was the beginning of the 2001 fall semester, and Judith S. “Judy” Palfrey ’67 was a faculty dean in Adams House. When she learned on the morning of Sept. 11 that two planes had crashed into the Twin Towers in downtown Manhattan, Palfrey recalls rushing to the Adams House dining hall.

“I canceled everything that was planned for the day and just stayed literally in the dining hall because the students were pouring in, sitting at various tables, crying,” she said in an interview earlier this week.

Saturday marks 20 years since the worst attack on American soil. In interviews this week, Harvard affiliates recalled how Harvard's campus processed that grim day in American history, when hijackers attempted to crash four civilian planes into major sites throughout the United States, resulting in more than 3,000 deaths.

Erica J. Doran ’05, a former Crimson president, recalls the chaos among classmates as they learned about the attacks while gathered in common rooms and spaces to watch the television report with classmates.

“After the first tower hit, there was just a lot of chaos and confusion as to what the cause was and what really was going on,” Doran said. “After the second tower came down, it became a lot more apparent that it was terrorism.”

“Just standing with strangers and gasping and staring at a small television in the gym, which was so bizarre,” she added.

“There was just a lot of noise in that room and fear,” she said. “We all just felt so alone and confused.”

Members of the Class of 2005 remember having difficulty getting in touch with their friends and families due to network failures. Doran said she specifically remembered people in her entryway unable to reach out to loved ones.

“I think for those with immediate family, it was even more terrifying that morning to feel so far away and removed, and just sort of watch what was transpiring,” she said.

In the days following 9/11, the University stayed open. Students grappled with the attacks, planning blood drives to help victims and demonstrating outside of Widener Library, advocating for a peaceful response to the attacks.

Many students personally affected longed to return home in the following days.

Some students contemplated returning home out of fear that Harvard would be targeted next, according to Goldsmith. She also said that campus quickly became consumed in conversations about international politics and how the U.S. would react.

“The campus became pretty politicized in certain ways,” Goldsmith said. “There was pretty quickly just a lot of conversation around how Bush had responded.”

Palfrey recalls that then-University President Lawrence H. Summers summoned students to Tercentenary Theater in Harvard Yard to hold a moment of silence. Judy recalled that Summers, who lost close friends in the attacks, was emotional while addressing students.

“We had been summoned to Tercentenary Theater once before, when John Kennedy died, and it was for me — for us — kind of a reprise of that very sad moment,” she said.

Among the worries of the day, Palfrey and her husband, John G. “Sean” Palfrey '67, who was also a faculty dean, said they were concerned for their Muslim students, who feared anti-Muslim bias would rise in the wake of the attacks. Before the attacks, the Palfreys had scheduled an event for Muslim college students around Boston, but even in the aftermath of the day, students urged them not to cancel it, she said.

“Going into that upper common room that afternoon and just hugging those students was really, really important,” Judy Palfrey said.

In 2001, Diana L. Eck was faculty dean of Lowell House. She said she was in the library when she heard about the attacks in New York, and immediately went to the junior common room of Lowell House to check on the students congregating.

Eck, a professor of comparative religion and Indian studies at Harvard Divinity School, remembers mosques in Cambridge opening their doors to everyone that weekend.

“There was a sense that we needed all of us and local communities needed to know who our Muslim neighbors were,” she said.

Harvard affiliates were also among the thousands of Americans who died in the attacks.

Edward R. “Ted” Hennessy Jr. ’88 boarded American Airlines flight 11 in the early morning of Sept. 11, heading to Los Angeles for a business trip. Shortly after, the plane was commandeered by five hijackers and flown into the North Tower of the World Trade Center.

Ronald E. Corcillo ’89 was Hennessy’s college roommate in Leverett House. He said the news on 9/11 had seemed surreal, but reality set in the next morning when he received a call from a mutual college friend. He said he immediately knew it was news of Hennessy’s death.

A few days later, Corcillo flew the reverse path Hennessy was supposed to have flown on Sept. 11, heading to Belmont, Mass. for Hennessy’s funeral.

“The funeral was an incredible event,” he said. “It was in Belmont, not far from Harvard, which is a small town. And yet the streets were packed with traffic for miles in every direction. I'm not sure Belmont ever saw a bigger event.”

Judy Palfrey said the events of 9/11 changed generations graduating from Harvard for years to come.

“The day before 9/11, if you were a Harvard student, there was nothing in the world you couldn't do,” she said. “There was a bravado. There was a sense of we can absolutely do anything. After 9/11, that bravado was gone."

—Staff writer Kate N. Guerin can be reached at kate.guerin@thecrimson.com.