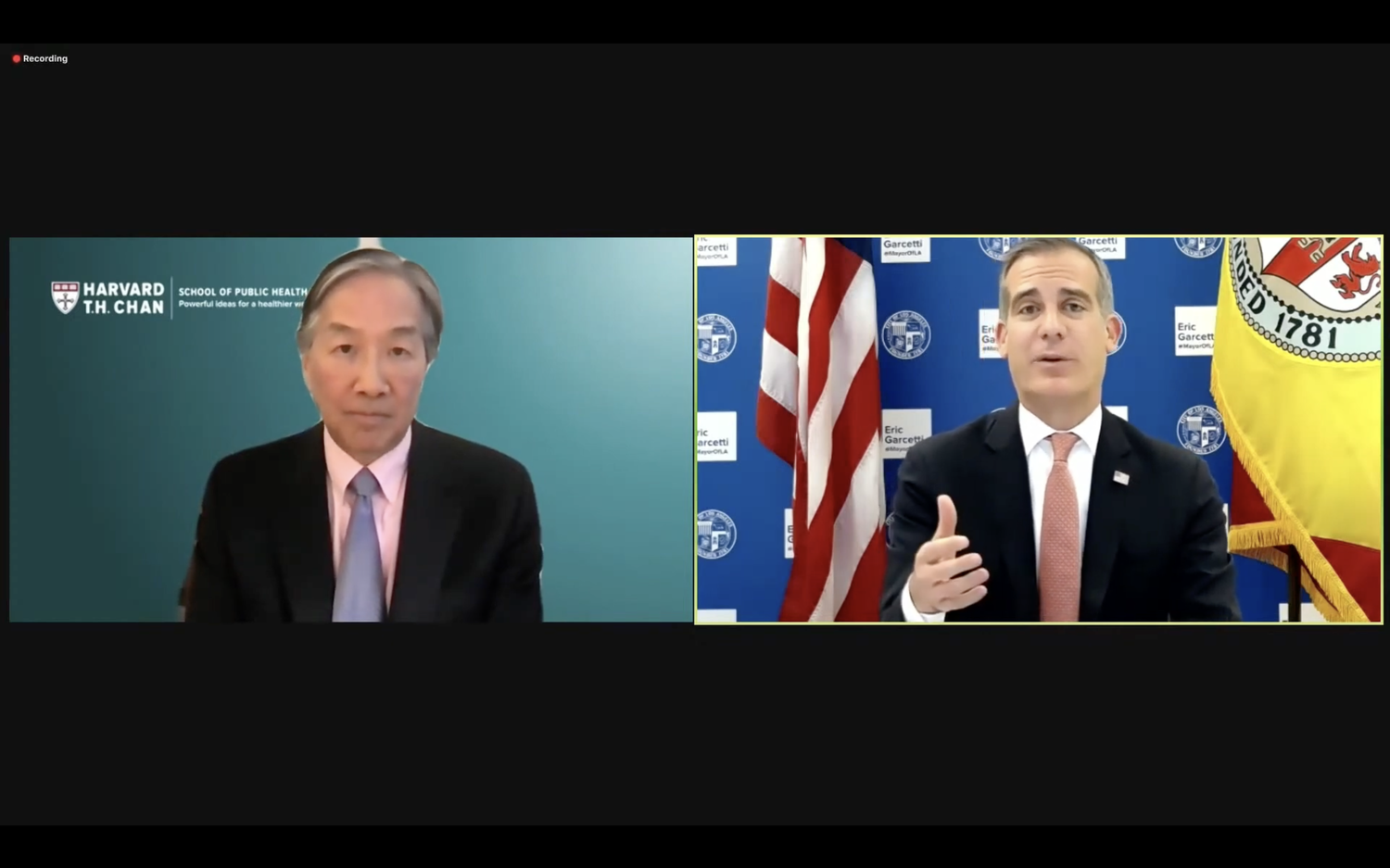 Los Angeles Mayor Eric M. Garcetti spoke about his city’s handling of Covid-19 and racial and socioeconomic inequality during a webinar held by the Harvard School of Public Health on Friday.

The series — titled “Voices in Leadership” — focuses on leadership education and seeks to provide insight on how to be an effective leader. The discussion with Garcetti was moderated by School of Public Health professor Howard K. Koh, the former U.S. assistant health secretary.

Garcetti, who is of Mexican, Jewish, and Italian heritage, opened by explaining how his family life and upbringing prepared him to become a public leader.

“To me, crossing borders is kind of the history of our family and also part of the metaphor of my life,” he said.

“My grandfather, who literally was carried over the border in Mexico when he lost his father as a baby during the Mexican Revolution, has resonance when I watch mothers carrying their own children today over the border and being separated from them,” he added.

Garcetti then discussed the United States’ handling of the ongoing Covid-19 pandemic. He noted that while the World Health Organization deemed the U.S. the best-prepared country in the world for a global pandemic, it “executed among the worst.”

Los Angeles was one of the first major cities in the country to put forth strict pandemic guidelines, such as shutting down movie theaters, restaurants, and other places of gathering. Garcetti said he worked with the California Governor Gavin C. Newsom to implement a full stay-at-home order on March 12, making California the first state to do so.

Los Angeles, along with the rest of the U.S., is now focused on vaccine distribution. Garcetti set up the “biggest vaccination site in the world” at Dodger Stadium, providing 20,000 vaccinations per day, he said. In an effort to ensure equity, Garcetti and his team established mobile vaccination sites that can enter people’s homes and target lower-income areas, some of which are “over 95 percent people of color.”

According to Garcetti, Director of the National Institute of Allergy and Infectious Diseases Anthony S. Fauci ranked Los Angeles as one of the best-performing cities in the country with regards to vaccine distribution.

Systemic racial and socioeconomic inequalities have long plagued the United States, and the pandemic has brought these injustices to the forefront of national attention, Garcetti said. To address these inequities, Garcetti said he believes that a universal basic income or a “real conversation about reparations” is needed in the country.

“It’s not just about making right what was wrong,” Garcetti said, “It’s about materially giving people the resources to have the same shot that you may have.”

In response to these racial inequalities, Garcetti pledged in June of last year to invest $250 million in communities of color, $150 million of which would come from the police budget. Garcetti argued that cities burden police with too many responsibilities that should not fall on their shoulders, such as assisting the homeless and responding to mental health crises. To redirect these responsibilities to more qualified professionals, Garcetti said some resources need to be shifted. For example, Los Angeles will soon roll out mental health care vans that will respond to 911 calls at any time of day, becoming the first major city in America to do so.

Asked what lessons can be learned from the crises of the past year, Garcetti said he hopes the country never disregards public health again, which he said was “systematically” defunded for the last couple of decades. Additionally, Garcetti said his greatest hope is that Americans work together and “find one another again.”

“We’ve locked into who we are supposed to be against rather than what we share,” Garcetti said regarding the pandemic. “A crisis that demanded we be separated from each other we found could only be solved by coming together.”

Garcetti ended by encouraging the School of Public Health students who were watching the webinar to drive change.