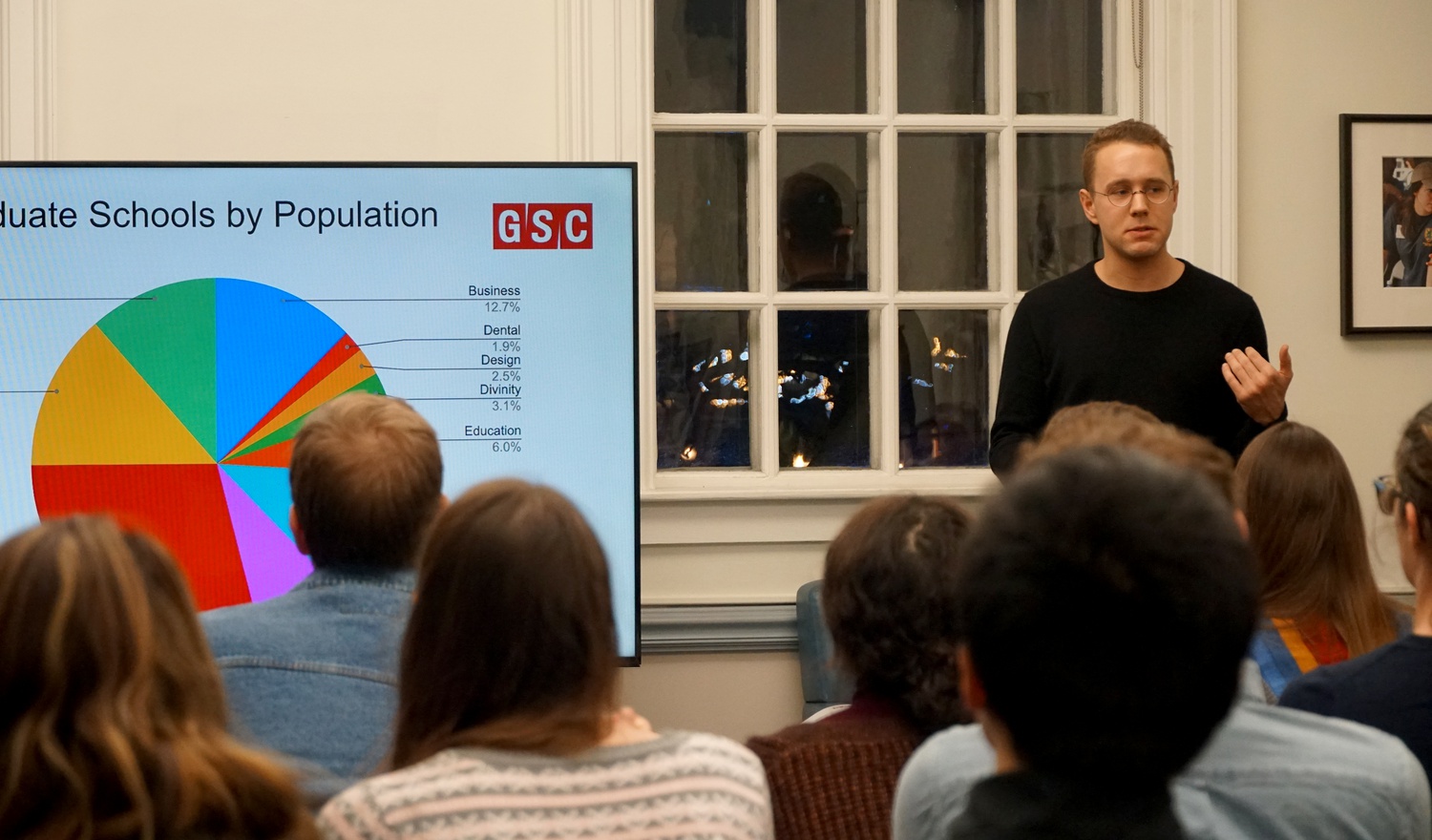 A Harvard Graduate Council meeting in February 2020. Meetings are now held virtually due to the pandemic. By Zadoc I. N. Gee
By Isabella B. Cho, Crimson Staff Writer

The Harvard Graduate Council reviewed survey data about the graduate student experience in the pandemic era, and also signed letters to the Biden administration co-written by the MIT Graduate Student Council during its second public meeting of the semester Wednesday.

Graduate School of Design students provided an introduction to the virtual gathering, continuing the in-person tradition of having one graduate school “host” each meeting. Mena W. Ahmed, the president of the GSD Student Forum, took Zoom attendees on a virtual “tour” of the school and highlighted its key traditions.

HGC President Chanthia C. Ma then presented the results of a student experience survey conducted across all the graduate schools this summer. Though Council representatives shared parts of the survey results with department administrators earlier in the year, Wednesday’s meeting was the first time the Council has shared the full findings publicly, Ma said.

The survey — which opened in May and closed in September — garnered roughly 2,000 responses, averaging a 10 percent response rate per graduate school, according to Ma.

Ma said student responses highlighted the importance of bolstering financial aid and a sense of community amid the challenges of the Covid-19 pandemic.

“One of the questions that Harvard Housing was very interested in asking was, ‘In order to be a successful student in a virtual setting, what’s essential?’ And it seemed like the top [response] was financial support, physical space, and a sense of community,” she said.

Chair of Advocacy Abhinaya Narayanan then presented seven letters penned by the MIT Graduate Student Council addressed to members of the Biden administration. The MIT Council is currently circulating the letters to graduate student governments across the nation.

Narayanan said the letters provided the Council an opportunity to advocate for issues that graduate students are currently confronting.

“This is an opportunity for us to contribute to the conversation,” she said. “Each of these schools represents 10 to 20,000 graduate students, so collectively — with the multiple graduate student governments that will be signing onto these letters — it’s a significant portion of the graduate student community speaking out on issues of importance to them.”

The letters — addressed to the United States Department of Homeland Security, the White House Office of Science and Technology, and the U.S. Department of Education, among others — speak to a myriad of concerns, including limited work visas for international students and a dearth of STEM-related funding for historically Black colleges and universities, as well as rural universities. The letters also called attention to the rollback of several Title IX provisions during the Trump administration.

HGC representatives chose to vote separately on the letter issued to the Department of Defense, which called for increased access to work visas and additional funding for students involved in “defense critical areas,” among other recommendations. While the Council did approve the motion to put its support behind the other six letters, it delayed the motion to sign the DOD letter and will hold an emergency electronic vote over the weekend.

A previous version of this article stated that the Harvard Graduate Council rejected a motion to sign a letter to the Department of Defense. In fact, the Council delayed the vote on the motion and will hold an emergency electronic vote over the weekend.