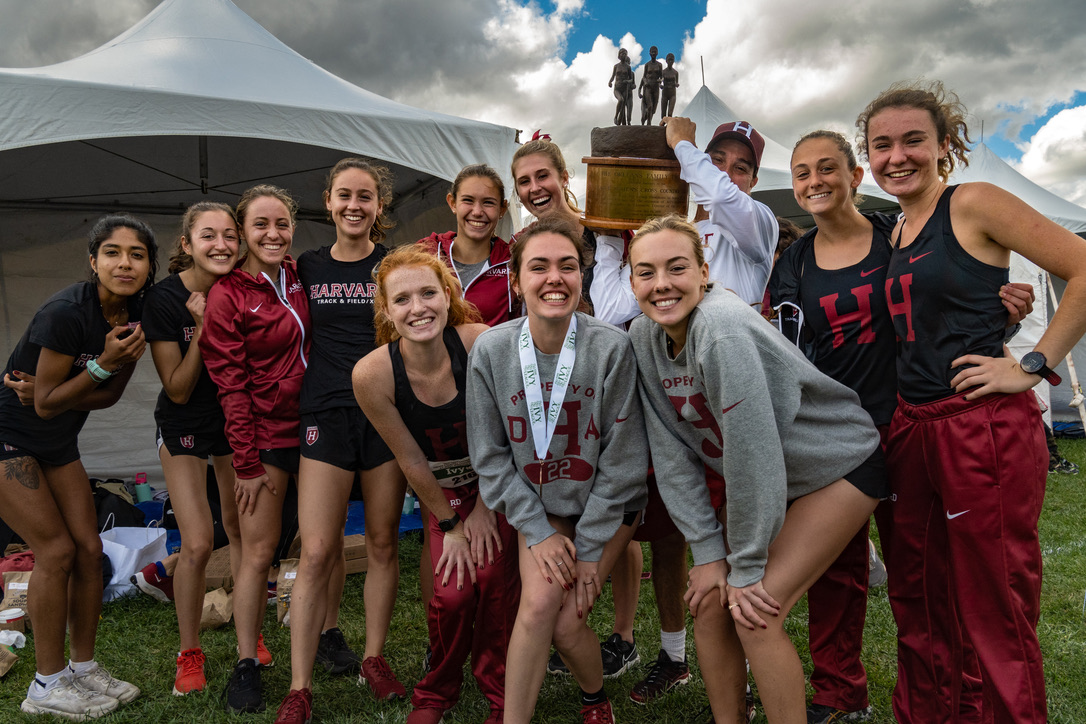 The Harvard women's cross country team celebrates its 2021 Ivy League Championship on October 30th. Crimson women's XC won NCAA Northeast regionals this past weekend, with the men's team finishing second as they both gear up for NCAA nationals this weekend. By Courtesy of Harvard Athletic Communications
By William Connaughton, Crimson Staff Writer

Coming off fantastic team performances at the Ivy League Championships two weeks ago, the Harvard men and women’s cross country teams both qualified for NCAA nationals, with the women winning regionals for the second season in a row dating back to 2019 and the men placing second in a field of over 35 teams.

Leading the way for the Crimson was sophomore Iz Sagar, who continued her dominant season for Havard following her third place finish at the Ivy League Championships two weeks ago. Crossing the line in fifth with a time of 20:41, Sagar improved dramatically from her 24th-place finish in the 2019 NCAA regionals race as a freshman. Behind Sagar was first-year standout Maia Ramsden who placed ninth with a time of 20:58. Ramsden was the third freshman to cross the finish line at regionals, an incredible individual achievement forthe New Zealand native.

With the strong finishes from Sagar and Ramsden, the key to the win for the Crimson was the cohesiveness of the back three scorers. The Harvard women were the only team to place all five of their scorers in the top 20 of the race. Leading the pack was sophomore Eloise Freitag, who placed 18th with a time of 21:10. Just behind Freitag were senior co-captains Judy Pendergast in 19th and Anna Juul in 20th. Both co-captains were strong scorers on the 2019 championship team and were able to beat most other team’s 3rd, 4th, and 5th best runners. First-year Isabelle Goldstein rounded out her quality debut season with a top-35 finish.

“I think our collective mindset has always been fixed on November races,” said Sagar on the team’s late season performance. “It’s easy to quickly deplete one’s physical, mental, and emotional reserves early, so we try to avoid this by training and recovering intentionally, always thinking about things from a broader perspective.”

Following the race, all five of the Harvard scorers were named to the NCAA Northeast All-Region Team, an indicator of the depth of the Crimson women. Going into Nationals this weekend, Harvard will hope to surpass their 31st place finish in 2019 and continue surprising teams along the way.

For the men, the regional rankings have been a toss-up all season long as Harvard, Iona, No. 23 Syracuse, and Providence have battled for the top position. Going into the 10k race, the at times top-heavy No. 26 Crimson men knew they would need a complete race to qualify for NCAA nationals. With strong individual performances across the board, Harvard placed 2nd in the regionals bout with 68 points, trailing only the Orange who won the meet with a strong 51 points.

Leading the Crimson in second place was first-year Graham Blanks, continuing a decorated opening year to his Harvard career. Blanks was the first freshman to cross the line in the meet with a time of 30:04, marking an outstanding individual performance for the runner from Athens, G.A. The next-best freshman finished in 19th. Just behind Blanks was senior break-out star Matthew Pereira who, fresh off of setting a new Harvard and course record at the Ivy League Championships two weeks ago, crossed in an impressive fourth with a time of 30:19. Within a second of Pereira was sophomore Acer Iverson, who continued his impressive 2021 campaign, finishing in fifth. In a field of over 230 runners, the Crimson were the only team across the two meets who placed three runners in the top five of the meet, an impressive achievement for the program.

While the Crimson men were unable to defend their NCAA regionals championship from 2019 due to a strong performance from Syracuse who placed runners third, sixth, eight, 13th, and 21st, the second place was good enough to get Harvard to NCAA nationals for the second year in a row.

“Our team goals are pretty clear, we just want a good race from each person one through seven. If we can get everyone to have a good day then we have a very high ceiling when it comes to overall placement as a team,” commented Melville on the team strategy going into this weekend. “The bump up to 10k plus the two races in eight days setup of nationals really helps us out compared to other teams because of the way we train, so we are looking to take advantage of those factors as well.”

Following the race, the top four scorers for Harvard were named to the NCAA Northeast All-Region Team, bringing the total to nine runners across the program. With both teams advancing to NCAA nationals for the second season in a row, the Crimson are quietly establishing themselves as a program to be reckoned with under the leadership of head coach Alex Gibby.

“Our returners have improved significantly and we also have new team members that have been performing really well this season,” noted Alber on the team this year. “We definitely want to improve upon our 15th place finish from two years ago and are eyeing a top 10 finish. It’s an ambitious goal but I believe it’s possible with this group. We did a good job at regionals but we have more left in the tank and we’re looking forward to showing that at nationals.”

Heading into nationals, the Harvard women jumped from unranked to No. 24, and the men jumped from No. 26 to No. 25. Both teams will have the task of improving on their 2019 finishes, including a 15th place finish for the men in 2019. Nationals will take place Saturday, November 20th at FSU.