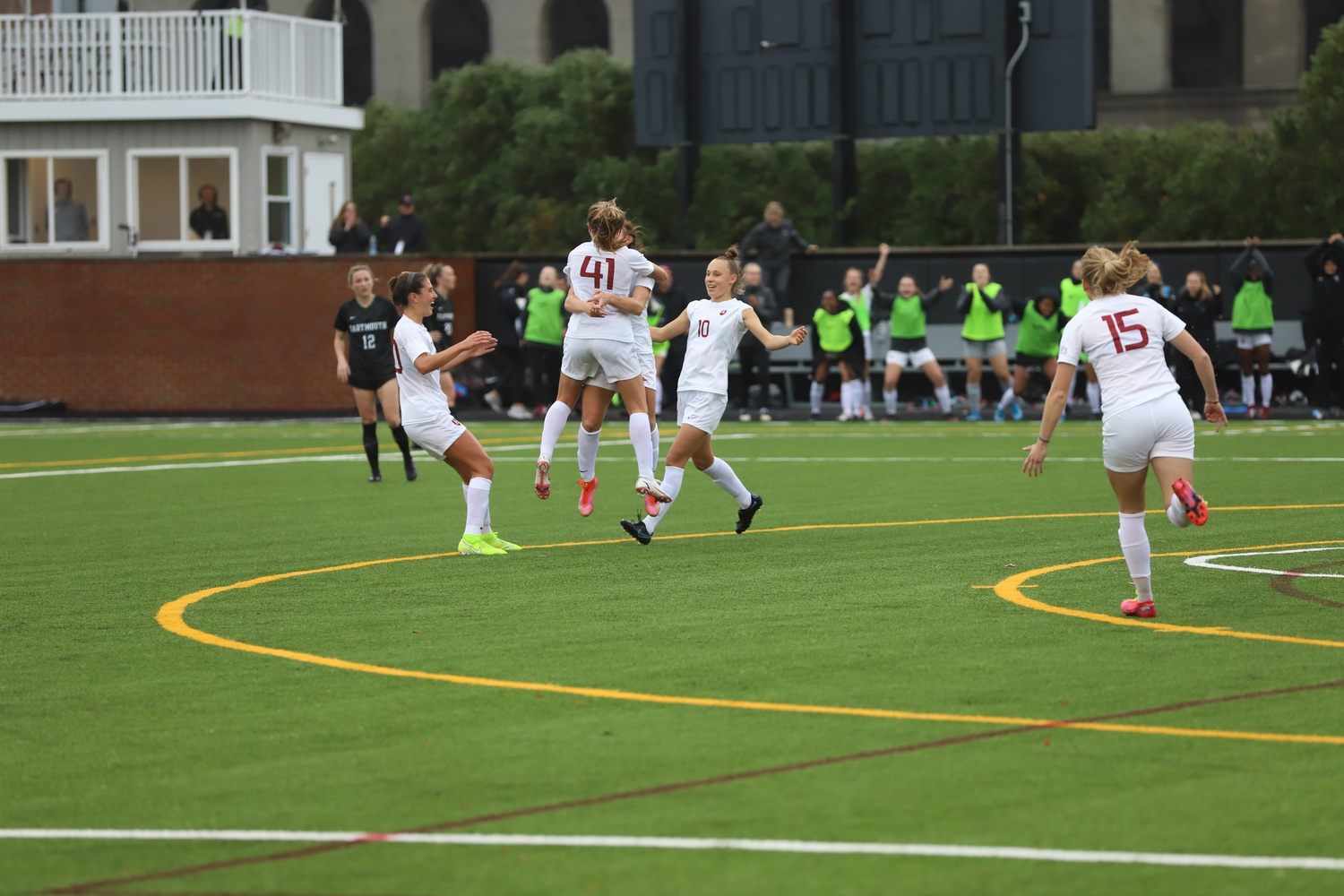 First-year forward Ainsley Ahmadian (#43) and first-year midfielder Hannah Bebar (#41) leap up in celebration of one of Harvard's goals in its 3-1 victory over Dartmouth on Saturday. By Owen A. Berger
By Lev Cohen, Crimson Staff Writer

Harvard snapped its two-game Ivy League scoreless streak in the seventh minute on Saturday afternoon en route to a comfortable 3-1 win over Dartmouth at Jordan Field that kept the Crimson (11-2-1, 4-2-0 Ivy League) in the hunt for an at-large bid to the NCAA Tournament. Standout midfielder Hannah Bebar played a part in all three Harvard goals, scoring twice and setting up the third goal beautifully to earn her league-high 10th assist in the Crimson’s final home game of the season and its second consecutive two-goal win over the Big Green (5-7-1, 1-5-0).

It might have been Harvard’s senior day, but it was the first-year Bebar who starred again. After she was held in check by Brown and Princeton in consecutive 1-0 defeats, Bebar found more time on the ball and freedom this time and made Dartmouth pay with the type of performance that makes it hard to believe that the Naperville, Ill., native is just a first-year.

“[Bebar] is such a talented player,” head coach Chris Hamblin said. “She was able to demonstrate that today. As good as she is now, she can be even better, and I’m looking forward to seeing her grow up.”

The Crimson was clearly determined to make a statement against Dartmouth. Harvard did not take as many shots as it had the previous week against Princeton, but the shots it did manufacture were much higher-quality. The Crimson made it a priority to be more patient in possession, and it showed, particularly on Harvard’s final goal, which was arguably its best team goal of the season. The ball started at the back with junior center back Lara Schenk. 12 seconds, a few precise passes, and one well-placed Bebar finish later, it was in the back of the net, putting an exclamation mark on a good Crimson performance.

“We were patient in the build-up,” Hamblin said, “and then when we broke them we broke them with speed. And that for me was a great goal. I think that was exactly what we should try to do more of. I think we had taken some low percentage shots in the past, so for us to be able to focus on getting quality chances was huge.”

Junior midfielder Hollyn Torres scored the first goal, nutmegging the Big Green keeper from a tight angle for her first tally of the season. Torres, after not seeing the field in Harvard’s first six games, has played in every Ivy League game and started the last two after being a consistent contributor in her first-year season in 2019. The Crimson has a deeper team this time around, but injuries to key contributors have given her more of a chance to feature this year, and she capitalized on that chance on Saturday.

“It’s really great that a player like [Torres] who didn’t feature much early on in the season was able to come in last week against Princeton and play a solid 90 [minutes],” Hamblin said. “And then again today play a couple of different positions and be on the scoresheet. That just goes to show the type of character that she has and that we want and promote and celebrate.”

The Big Green got a late consolation goal after creating little for most of the game. Dartmouth’s first shot in the game came more than 20 minutes in, and its two shots on goal through the first 80 minutes came on free kicks from long range. Harvard’s defense, led by imposing first-year center back Jade Rose, did a good job of limiting the air space of dangerous forwards Hannah Curtin and Allie Winstanley on the counter-attack. Winstanley got on the board in the 86th minute, as she pounced on a rebound inside the six-yard box and deposited it into the back of the net. But it was too little too late, and while Dartmouth ended up registering 11 shots, the most the Crimson has allowed in Ivy League play, five of those efforts were blocked.

Later Saturday, Brown (11-3-0, 6-0-0) clinched its second consecutive Ivy League title with a 1-0 win over Penn. The Bears will be headed to the NCAA Tournament, but it remains to be seen whether Princeton, Harvard, or both will join them. The Crimson will look to bolster its resume and end the regular season with a win next Saturday at Columbia (9-5-1, 3-3-0).