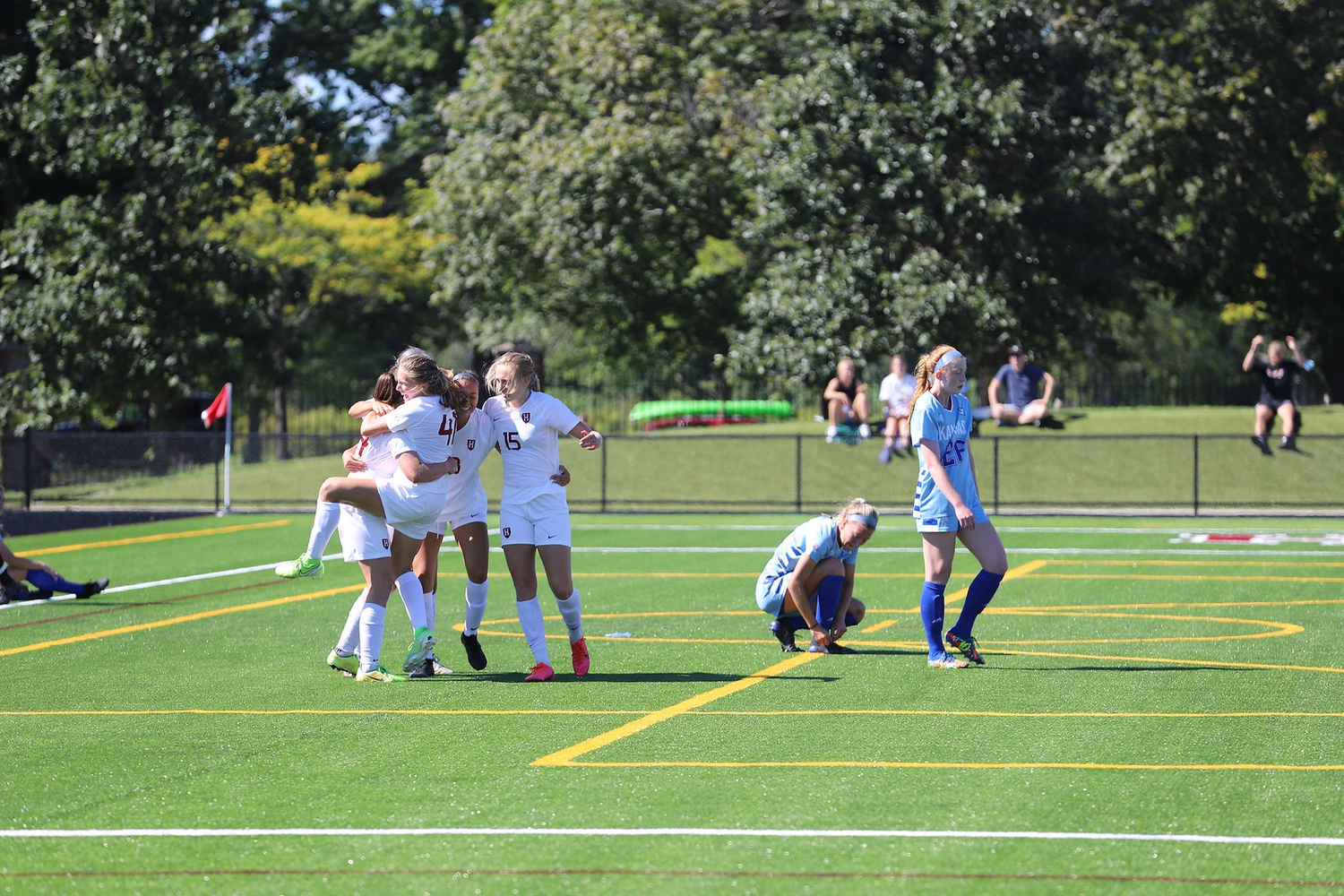 Harvard women's soccer celebrates in a crucial matchup with Kansas earlier this season at Jordan Field. The Crimson's strong 2021 campaign continued Tuesday night against Central Connecticut State, as the team improved to a 10-1-1 record. By Owen A. Berger
By Shahmir Aziz and Christopher D. Wright, Contributing Writers

It took just four minutes into the game for the Crimson (10-1-1, 3-1-0 Ivy League) to get onto the scoreboard, when junior forward Angela Caloia found the back of the net with a blistering shot, thanks in part to precise playmaking and assists from senior midfielder/forward Sophie Hirst and first-year midfielder Hannah Bebar. This quick goal was a strong start to Harvard’s 3-0 victory over Central Connecticut State University (10-5-0, 7-2 Northeast Conference).

“We knew we needed to come out firing offensively, and we did just that in the first half,” coach Chris Hamblin said. “We had a lot of really good moments in possession, and I think the team applied itself really well tonight and executed the plans we had.”

After a series of shots on goal, the Crimson managed to sneak another shot past junior Blue Devil goalie Amanda McQuillan. In the 25th minute, sophomore defender Taylor Fasnacht slashed into the front third and found the back of the net from the right side of the field. Harvard managed to keep momentum on its side after an offside call. After regaining possession, Caloia took a pass from Fasnacht and guided it into the back of the net for her second goal of the game.

The Blue Devils started to take control of the game after the trio of goals from the Crimson. Central Connecticut dominated possession for the rest of the first half, as one of its forwards, first-year Kristina Kelly, managed to fire three shots toward the goal.

The Blue Devils carried their momentum into the second half. They sent another three shots towards the goal but were never able to break through for their first goal. Despite this early onslaught, Harvard remained in control the rest of the game. However, it failed to add to its three-goal margin.

The Crimson looked to get many different players time on the pitch and match experience. All but two starters were substituted out of the game. Harvard also deployed the use of three different goalkeepers, junior Hannah Gardner, sophomore Anna Karpenko, and senior Samantha Schmitz, to shut out the Blue Devils.

Coming off a tough loss last week against No. 22 Brown (10-3-0, 5-0), the Crimson managed to come back into form brimming with confidence and composure as it executed its plans strategically and precisely, giving an all around comprehensive performance and looking solid on both offensive and defensive fronts throughout the game.

“I think it was a really comprehensive performance, and I’m really proud of how we responded after a tough result on Saturday,” said a proud Hamblin after the match. “We talked about it as a team, we didn’t have much time but watched videos, strategized and talked about execution, especially in the final third and getting around the corner with our wide players, and we did just that.”

Next up for Harvard is the third of a four-game homestand at Jordan Field. The Saturday matchup with No. 23/NR Princeton (11-2-1, 3-1) is extremely important for the Crimson as it seeks to remain competitive in the Ivy League standings. Harvard hopes to carry the momentum from this game into the weekend as it vies for a postseason berth.