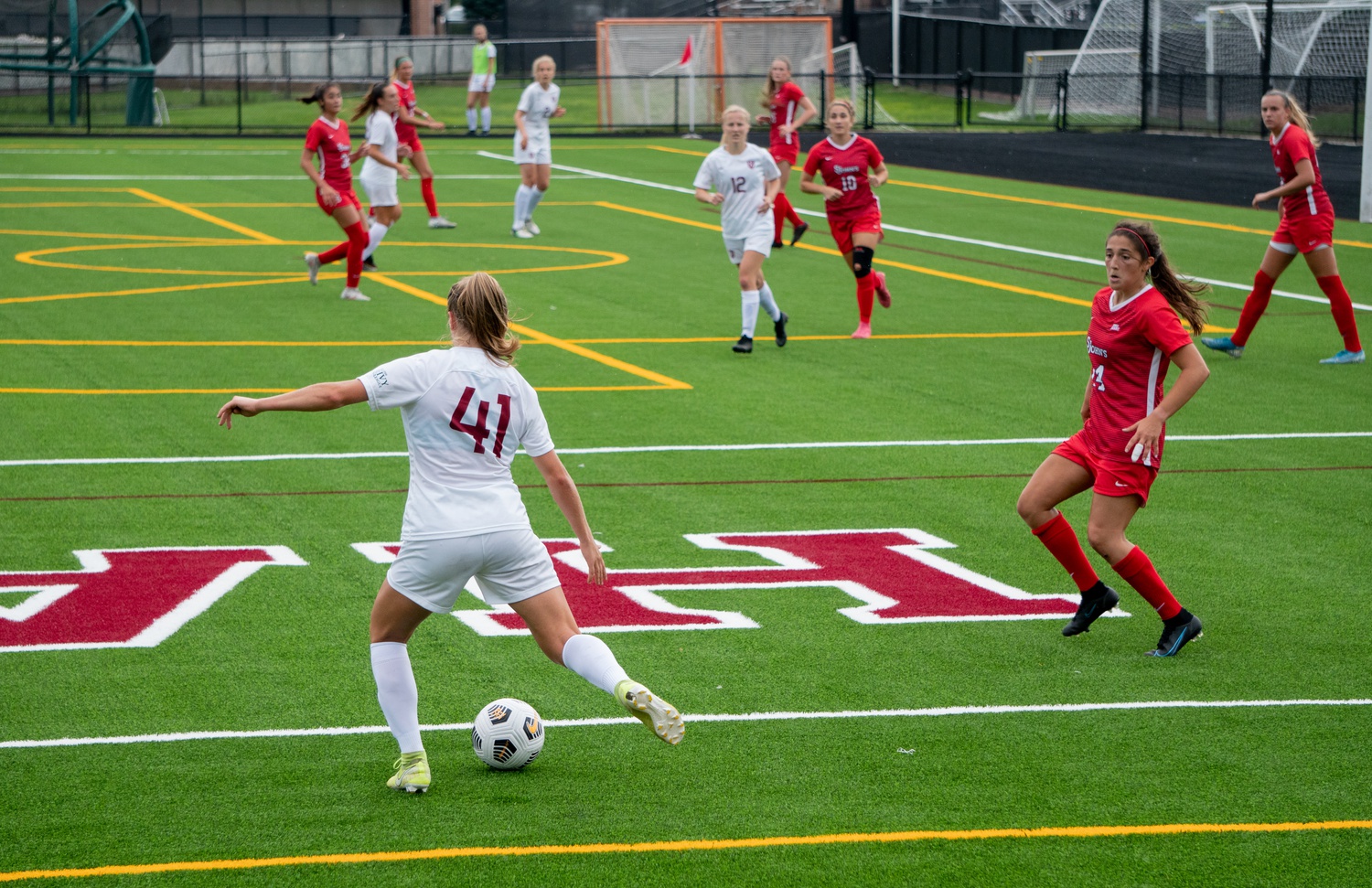 First-year midfielder Hannah Bebar looks to deal the ball to a teammate in a match against St. John's, a contest the Crimson won 3-2 in overtime. Harvard did not have the same luck versus Princeton, falling 1-0. By Zadoc I. N. Gee
By Lev Cohen

Princeton’s forward Tatum Gee pounced on an under-hit back-pass, then calmly chipped the ball over the head of sophomore goalie Anna Karpenko and into the net in the 78th minute as a feeling of deja vu swept through the crowd at Jordan Field. The defensive error doomed No.15/RV Harvard (10-2-1, 3-2-0) to a second consecutive dispiriting 1-0 defeat against a championship rival on a beautiful Saturday afternoon, extinguishing its hopes for an Ivy League title as No.23/NR Princeton (12-2-1, 4-1-0) kept pace with league-leading Brown.

Last week, the Bears scored the game’s only goal on their only real chance, which came after a defensive miscue in the 75th minute. In its second and final home game against a nationally-ranked opponent, the Crimson again gave up a late winner despite controlling most of the game and clamping down on a dangerous opposing attack and could not respond in time to avoid a 1-0 shutout.

“It was very upsetting,” head coach Chris Hamblin said. “We did a lot of good things again, similar to [the Brown game]. We had a lot of possession, a lot of chances and opportunities, we just didn’t have the quality. And that quality that was lacking cost us the game. They had a really good chance in the second half and they took it, and credit to them, that’s how teams win games. We’ve got to learn how to win these games; we haven’t been able to do that yet. And that’s going to be the hardest part for us to swallow is that we’ve been the better team in these games.”

Despite the eerie similarities, Harvard looked a lot more likely to score a goal against Princeton than it had last weekend, particularly in the first half. The Crimson often worked the ball into decent attacking positions and racked up 23 shots in the game, including five in the desperate final 12 minutes, while conceding only nine. While Harvard may have slightly outplayed Brown last week, there was no question who the better team was this time around, as the Crimson dominated possession and produced most of the game’s best chances. Harvard played some good combination passes, with junior forward Angela Caloia’s hold-up play and first-year midfielder Hannah Bebar’s dynamism on the ball integral to the Crimson’s best passages of play.

Yet too often, the possession was a little too stagnant and movement from the front three a little too predictable, and the attack tended to break down once the ball reached the area around the top of the box. Princeton played scrappy, unyielding defense, holding Harvard at bay and forcing it into speculative long-range efforts, many of which were blocked. When the Crimson did create serious chances, it was usually from crosses from wide positions or off of set pieces. In the first half alone, junior midfielder Hollyn Torres, first-year center back Jade Rose, captain Sophie Hirst, and Bebar had presentable chances, yet the most Harvard could generate was a few tepid shots on goal that landed safely in the arms of sure-handed Princeton goalie Grace Barbara.

The Crimson’s best chance to notch a goal came just a few minutes after Princeton broke the deadlock. Bebar whipped in a pacy cross from the right wing, and the ball broke kindly for Harvard in the box, falling at the feet of Hirst. But the midfielder flashed her shot wide, and the Crimson did not again come so close to evening the score.

“I think we learned from the Brown game,” Hamblin said. “We took it with us and we did some really good things. We just weren’t able to finish and that’s ultimately what teams are judged by is how you score goals, and we weren’t able to do that. I’m proud of the effort. We competed, we didn’t stop, and we didn’t give up hope and belief. We just lacked the execution and that’s what’s going to haunt us.”

Harvard played a good defensive game, setting the tone early with an energetic press and often winning the ball back in midfield with strong tackles from forwards and midfielders who tracked back well, with Hirst in particular serving as the ball-winning midfielder. While Princeton tried to play direct, attacking soccer, the Tigers had few periods of sustained possession, and much of the first half was lopsided. Princeton’s strongest periods came early in each half, but even then the Tigers could not generate more than a few tame shots.

But given the lack of production in the final third, the margins were slim, and all it took was one error to send Harvard spiraling into third place in the Ivy League. The Crimson is now two games behind the undefeated Bears and squandered its last chance to add a marquee win to its resume ahead of the NCAA Tournament next month. Harvard will look to bounce back in its final two league games against Dartmouth and Columbia in the hopes of securing an at-large bid to the tournament.