Kornacki and His Khakis Hit the IOP Forum 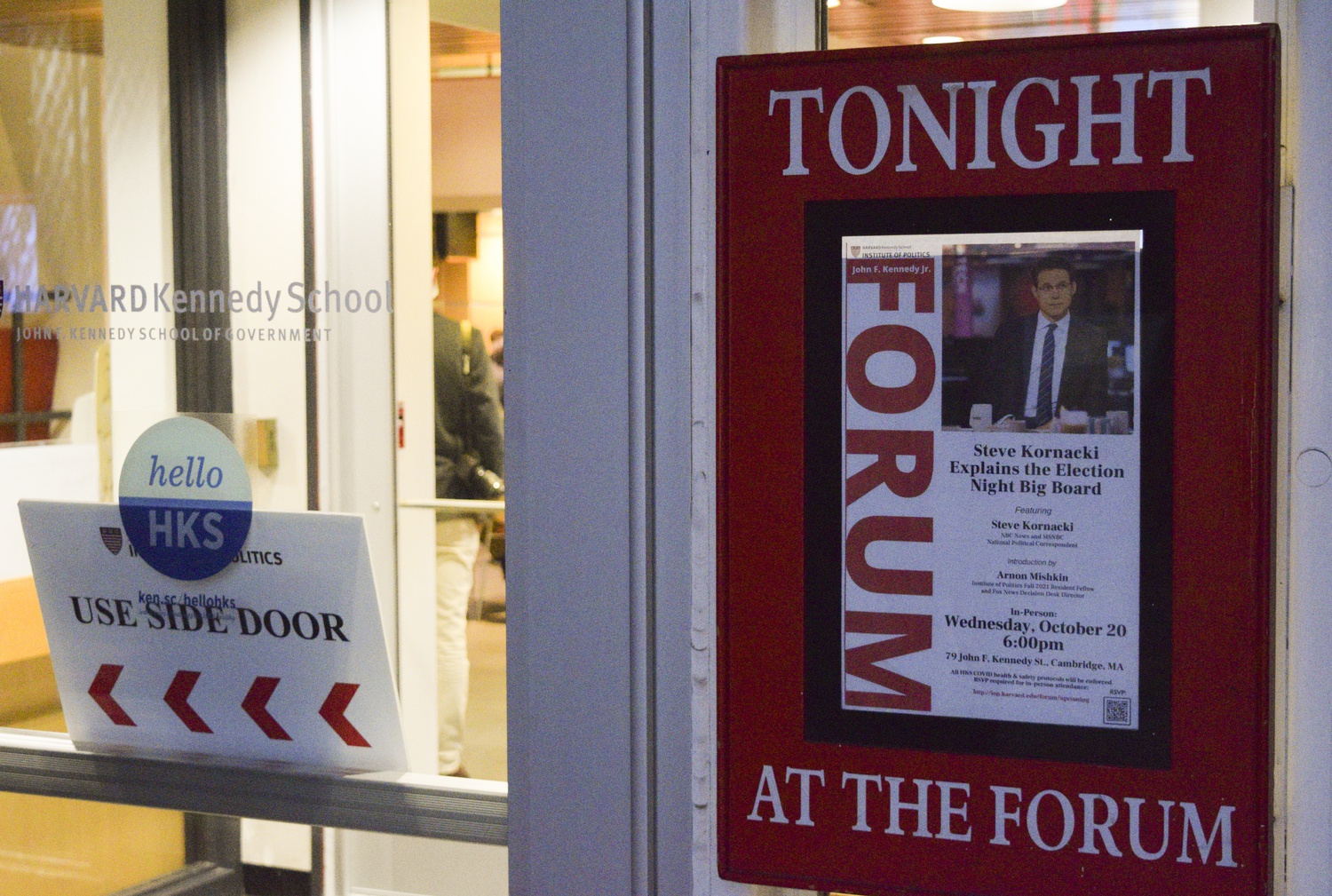 Stephan J. “Steve” Kornacki, an NBC News and MSNBC national political correspondent, discussed his career trajectory, his approach to presenting electoral data, and ongoing threats to American democracy at a JFK Forum on Thursday evening at the Institute of Politics.

Clad in his signature khaki pants and rolled-up sleeves, Kornacki took the stage and fielded questions from an audience of more than 100 attendees.

Kornacki — today one of the most well-known personalities in cable news — kicked off the event describing his start in journalism in New Jersey, where he worked for the defunct political news site PoliticsNJ.com.

“I tell people the three years I spent there were the funnest, most professionally satisfying three years of my career. It’s the graduate school degree I never got,” he said.

The discussion then shifted to Kornacki’s specialty: digesting electoral data. Even without his trademark big board, Kornacki gesticulated thoroughly as he answered questions.

Known for his quick recollections of decades-old political patterns on live television, Kornacki gave the audience a primer on U.S. electoral history, starting with the 1876 Tilden-Hayes Compromise spanning to the “butterfly ballot” in 2000.

He also offered insight into how he prepares for marathon election coverage, which sometimes goes through the night.

“Going through the simulations ahead of time just helps me get a sense of — as that picture comes into focus in every county — what the kind of benchmarks are [for victory] along the way,” he said.

Kornacki admitted that “it’s not foolproof.”

“Especially in this era, with all the variables, with early voting and mail-in voting, there’s a lot of question marks about the sequence of how those get released in every state,” he said. “I’m feeling a little bit stressed looking at Virginia,” he said, in reference to the state’s upcoming gubernatorial election, which he will cover for MSNBC on Nov. 2.

When asked about the accuracy of polling, Kornacki said the framing of a survey question can dramatically change its results. He cited support for background checks and vaccine mandates as examples.

“You can think about a very narrow issue framed in a very particular way to poll, and you can be tempted to believe that there is a strong conviction on the part of the public,” he said.

“So much of political media now is partisan,” Kornacki said. “People want numbers that make them feel good.”

In an interview after the discussion, Kornacki said he was excited to participate in an in-person forum after spending months doing Zoom events.

“It was great just to be able to be in a room with people and actually see them and hear their voices in person,” Kornacki said. “I just love talking about this stuff with people.”

After passionately addressing an audience of college students about electoral maps, Kornacki said he is inspired by young people’s enthusiasm for political engagement.

“I can remember being in high school for the Clinton-Dole election in 1996, and if I brought it up to anybody, they would just make fun of me for caring about this thing that nobody cared about. So it’s kind of wild to me that — a generation later — comparatively speaking, everybody is interested in some way,” he said.