In early May 2020, former Secretary of Education Betsy D. DeVos released a controversial Title IX rule that drummed up controversy, criticism, and confusion at Harvard and beyond. How will the incoming Biden administration deal with the rule?
By Jessica Lee and Christina T. Pham

In early May 2020, former Secretary of Education Betsy D. DeVos released a controversial Title IX rule that drummed up controversy, criticism, and confusion since it was first proposed in November 2018. DeVos — who stepped down just days ago — gave universities until Aug. 14, 2020 to update their policies to comply with federal law.

DeVos’s changes required universities to implement a grievance process in the investigation of formal Title IX complaints. In this process, both complainants and respondents will be allowed to question each other during a live hearing. The new guidance also restricts the kinds of sexual misconduct universities can investigate.

Harvard designed an “Interim Title IX Sexual Harassment Policy” to conform with the new rule, in addition to creating an “Interim Other Sexual Misconduct Policy” in August 2020 to “address misconduct that falls outside the jurisdiction of the Interim Title IX Sexual Harassment Policy.” This supplemental policy encompasses sexual misconduct during a study abroad program, for example, as well as other off-campus instances without significant university oversight.

University Title IX Coordinator Nicole M. Merhill said in an interview this month that she believes that the periodic Title IX policy changes that come with turnover in federal administrations do not disturb the work at Harvard’s Title IX Office to any significant degree.

“The work that we do at Harvard in this space goes well beyond the federal legal requirements,” Merhill said. “And so while there will be changes, as there always are with administrations — different administrations have different areas of focus — our work will continue. And I don't think that it’ll be largely impacted by the change in administration.”

According to Marisa J. Borreggine — vice president of the Harvard Graduate Students Union - United Automobile Workers — DeVos’s new guidance was poorly timed, coming out in the midst of a pandemic. Borreggine said it was already a tumultuous time for Title IX policy, with the pandemic raising questions about how “sexual and gender-based harassment policy is implemented on a virtual campus.” Now, online forms of sexual harassment do not fall under Title IX policies as they otherwise would.

“In the end, that's on Betsy DeVos for handing down these regulations in the middle of a pandemic — these regulations that narrowed down what even counts as an instance of harassment or discrimination that further interrogate survivors and their experiences,” Borreggine said.

Merhill said that the dramatic regulatory change seen in May “is not something that happens often,” stressing that the University’s efforts to comply with the new rule so swiftly — especially during the pandemic — were “truly remarkable.”

A Challenge to Change Course

The Trump administration’s move to require a live hearing marked a major shift from Obama-era federal guidance, which “strongly discourage[d] schools from allowing the parties personally to question or cross-examine each other” during hearings, as released in a 2011 memo dubbed a “Dear Colleague” Letter. A number of survivors said that the potential for cross-examination by their assailant would deter them from coming forward.

Another major change implemented by the Trump administration was narrowing the definition of sexual harassment to conduct that is both “severe” and “pervasive.” Obama-era guidance, by contrast, more broadly described sexual harassment as “unwelcome conduct of a sexual nature” that included “requests for sexual favors, and other verbal, nonverbal, or physical conduct of a sexual nature.”

In early May 2020, former Secretary of Education Betsy D. DeVos passed a controversial Title IX rule that drummed up controversy, criticism, and confusion at Harvard and beyond. How will the incoming Biden administration deal with the rule?

“Biden will surely work to reverse the illegal overreach of DeVos’s rule,” Rosenfeld wrote in an email. Rosenfeld is also co-counsel in a pending federal court case in Boston challenging DeVos’s Final Rule — which she described as “damaging and horrific.”

Biden’s campaign policy director, Stefanie G. Feldman, told reporters in November that Biden intended to “return to and then build on” Obama-era policies. Additionally, Vice President-Elect Kamala Harris was one among a few dozen senators who condemned DeVos’s new rule in June.

However, other experts said excessive faith in the Biden administration may be premature, given enormous legal challenges it would face should it choose to reverse Devos’s policies.

Harvard Law School professor Jacob E. Gersen noted in an email to The Crimson that he was doubtful about a “straightforward return” to Obama’s Title IX policies.

DeVos’s Title IX Final Rule was issued by the Department after Notice-and-Comment Rulemaking, Gersen noted. This type of procedure — which requires a notification to the public of the proposed rule and acquisition of public comments — establishes policies that hold “just as much force and effect as a statute passed by Congress,” Gersen explained — and thus would be challenging to undo.

Changing DeVos’s policy would require undergoing a new round of notice of the proposed change, acquiring comments from the public, and implementing new final rules that would themselves be susceptible to further legal challenge. Gersen estimated this “onerous” process to take years. The last iteration drew more than 100,000 pieces of feedback that ultimately took more than a year to review.

Harvard Law professor Elizabeth Bartholet similarly said that reversing these policies would “take time” due to the extensive regulatory process.

“It will be a challenge for the administration to reverse the policies entirely,” Bruno wrote in an email. “I am confident, however, that they will address the most glaring and inequitable policies.”

'Change Happens within a Community'

Though “grateful” for a change in presidential administrations — and the hope of a survivor-centric approach to federal guidelines — Borreggine said HGSU-UAW will continue to call on Harvard to reform its sexual misconduct policies beyond federal requirements. She said the union hopes to resume its longstanding efforts reach an contract agreement by the end of the spring semester on a grievance procedure for sexual harassment complaints with Harvard.

One of the union’s central organizing tenets will be opening up more options for survivors of identity and power-based harassment, including “bullying for cases of sexism, racism, ableism, and queerphobia," she said.

Borregine said that Harvard’s existing sexual misconduct policies — even prior to the Trump administration — were “broken.”

“The way that Title IX exists right now is narrowing the options for survivors, and the best thing that you can do is always be providing survivors with more options so that they can have choice and power given back to them in this situation,” Borreggine said. 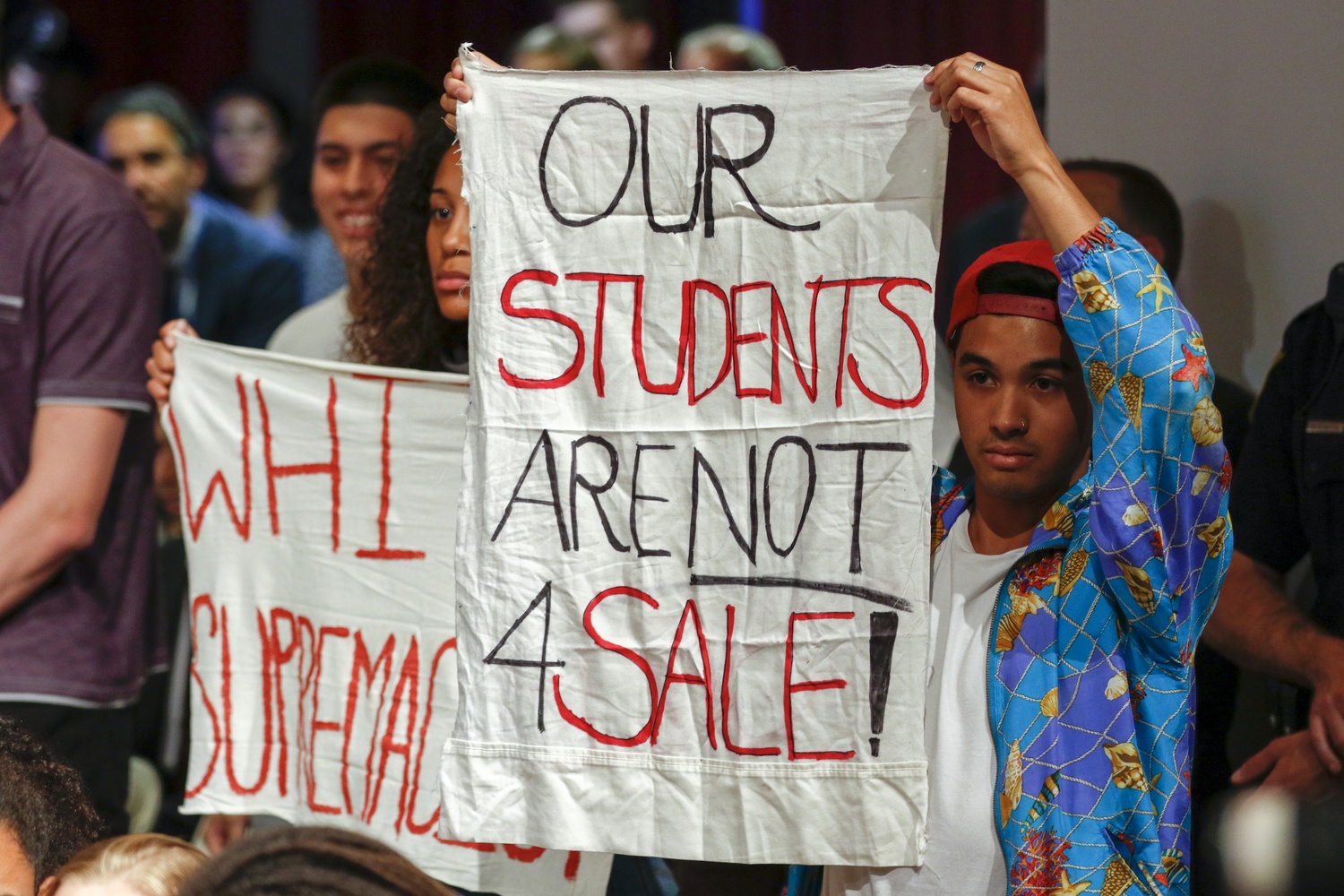 Rebecca S. Araten '22 — a former Crimson editor and spokesperson for Our Harvard Can Do Better, an anti-sexual assault advocacy group — commended Harvard for holding itself to a “higher standard” after DeVos’s policy was issued by introducing its own supplemental sexual misconduct policies.

She noted, however, that the University has nevertheless failed to meet the group’s remaining demands. Such demands include re-introducing a sixty-day timeline for completion of Title IX investigations, as removed by DeVos, and adopting an affirmative definition of consent — an explicit and informed agreement to engage in sexual activity.

Araten emphasized the importance of diversity and inclusion within Harvard’s Title IX Office.

“Currently, the Office for Sexual Assault Prevention and Response is shrinking in size and losing diversity,” Araten said. “Students should see themselves represented in the people who are providing them care and restorative responses.”

Merhill stated that the Title IX Office will remain committed to expanding gender and diversity initiatives, enhancing campus resources, and soliciting feedback from members of the University.

Araten also stressed that a community-oriented support system is integral to the wellbeing of sexual harassment survivors, but she said she believes this system must grow from the student body, and not from the Title IX office.

“Change happens within a community and not necessarily within an administration or administrative office,” Araten said.

Rosenfeld said she hopes that student groups can spearhead major policy changes themselves.

“I am sure the Biden administration will want to hear from schools and students alike,” she said. “Harvard should get out in front of this with some new, innovative, student-led initiatives.”

Other experts emphasized that no matter what direction Biden’s new administration takes, it falls upon schools to uphold the value of fairness.

“Each school has different policies and procedures. They must strive to adhere to those policies and enforce them with an even hand,” Bruno wrote.

“Unfairly treating one party benefits no one,” she continued. “The person who is treated unfairly continues to feel victimized and then the case is prolonged with appeals. It’s difficult to do, but schools must do everything they can to be fair; that is what Title IX is all about.”