Will Joe Biden Deliver on His Promises to Alleviate Student Loan Debt?

President-elect Joe Biden pledged multiple times on the campaign trail to alleviate debt. Many of Biden’s supporters, however, remain skeptical as to whether the incoming administration will deliver on its promise to alleviate the financial anxiety facing millions of Americans.
By Isabella B. Cho 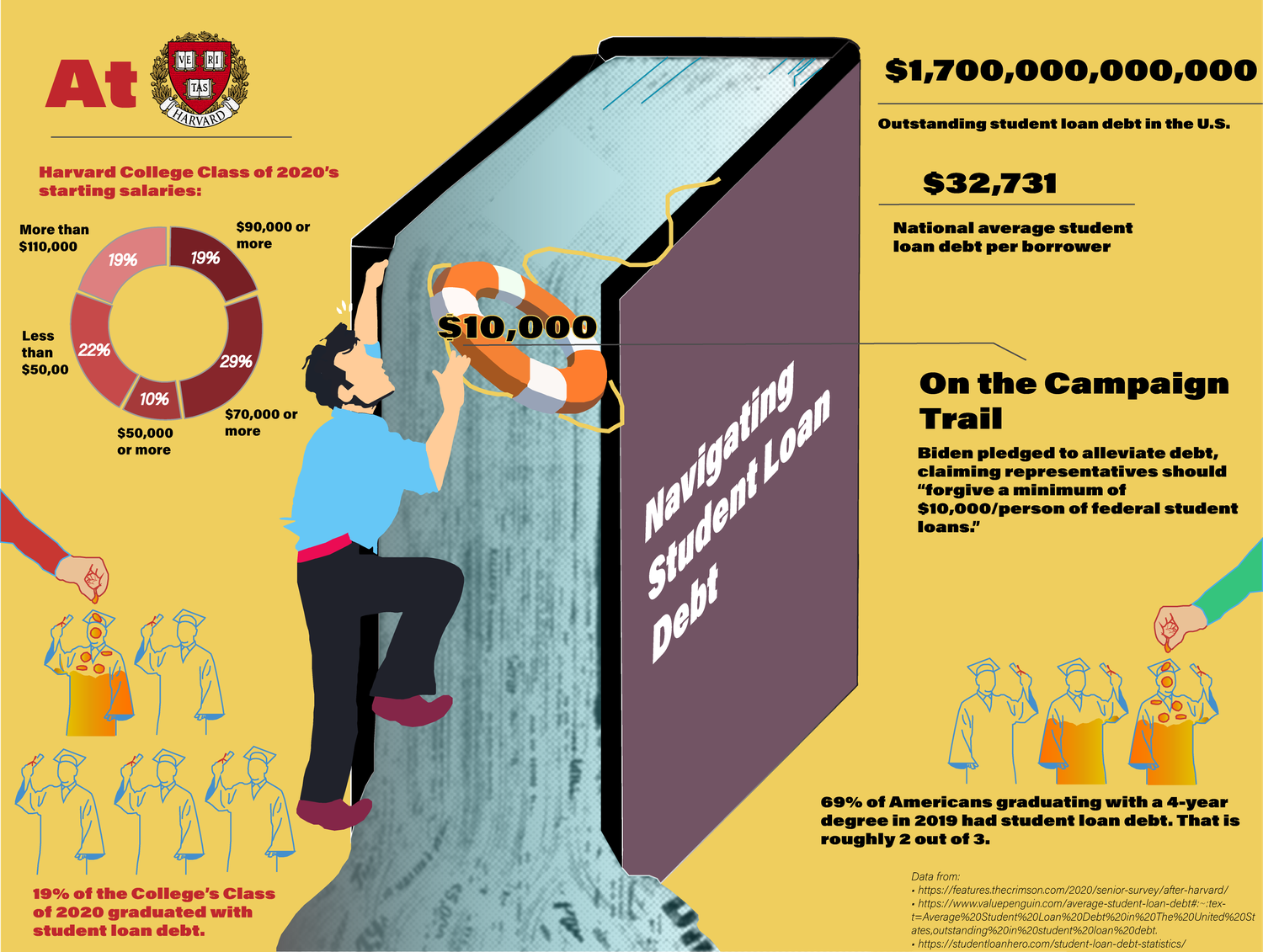 For Morgan R. Pratt, a Master of Public Policy candidate at the Kennedy School, a daunting obstacle stands between them and their dream of pursuing a career in climate activism following graduation — student loan debt.

“I have a lot of student loan debt and a really high propensity to do something in the public service industry,” Pratt said. “Right now, I have this huge incentive to just follow in the footsteps of my classmates and get a consulting gig — which would help eliminate my student loan debt, but put me into this workspace that creates all these perverse incentives.”

“Essentially, I’d be exacerbating the problems I really want to solve. Or I can just toil away and put myself in a bad place financially,” they added.

Pratt is not alone. This past year, the total amount of student loan debt for Americans hiked to roughly $1.7 trillion dollars across more than 43 million U.S. borrowers. President-elect Joe Biden pledged multiple times on the campaign trail to alleviate debt, claiming that representatives should “forgive a minimum of $10,000/person of federal student loans,” according to a tweet on March 22, 2020.

Recently, Biden also said he plans to extend the student debt forbearance program, building on a previous extension by former Secretary of Education Betsy D. DeVos scheduled to expire Jan. 31. Many of Biden’s supporters, however, remain skeptical as to whether the incoming administration will deliver on its promise to alleviate the financial anxiety facing millions of Americans.

Joshua H. Berry ’21, who said he has supported Biden since the beginning of the presidential race, said the president-elect has vacillated on his policies. It remains to be seen, according to Berry, whether or not Biden will act on his verbal pledge.

“I think what we may have witnessed is the campaign promise, and then the ‘pull the carpet out from underneath,’’’ Berry said.

To some, Biden’s pledge to cancel up to $10,000 of student debt per borrower is by no means enough. Brandon J. Mancilla, a current Ph.D. candidate in the History department and president of the Harvard Graduate Student Union-United Automobile Workers, said the singular best step forward for the administration is complete student debt cancellation.

“When we talk about millennials and Gen Z, we’re talking about people going into their 20s, 30s, and 40s. These are people who can get a house, get a car, invest in property,” he said. “The more ambitious programs and proposals are the ones worth considering. 10,000 is not enough. 50,000 is great as a compromise position — I’m a little wary of going for 50,000 and then settling for far less.”

Ryan Zhang ’21 also emphasized that $10,000 should just be the first step, and that more aggressive policies will be needed to address the economic and racial inequality underlying issues of debt.

“Biden’s plan is infinitely better than what we have right now under Secretary DeVos and President Trump. But it doesn’t go nearly far enough,” he said. “There are people like Bernie Sanders, Elizabeth Warren — Democratic progressives who have advocated for cancelling much more than just $10,000, up to $50,000. That level of response is what we need right now.”

Others contend that swift debt cancellation through executive powers is the most effective step forward. Legal Director at the Project on Predatory Student Lending Eileen Connor said Biden and Vice President-elect Kamala D. Harris “will not need to wait for Congressional action to make a difference for millions of former students and their families” in a press release dated Nov. 9, 2020.

Connor highlighted that the use of executive powers to cancel student loan debt would prove particularly beneficial for borrowers of color.

“Debt cancellation of $10,000 per individual — the minimum that President-elect Biden promised — would deliver concentrated benefits for Black and Hispanic/Latinx borrowers, because it would entirely wipe out student loans for a disproportionate number of borrowers of color,” the statement reads.

In December, Biden said to the media that, though it is “arguable” that the president has the executive powers to cancel up to $50,000 in student debt per borrower, he is “unlikely” to go through with the executive action.

While blanket debt cancellation is desirable to some, others argue that universal forgiveness may actually exacerbate inequalities. Harvard Professor of Public Policy David J. Deming highlighted that individuals’ actual loan balances frequently do not reflect their economic conditions.

“A policy needs to focus on helping people who don’t have the ability to repay the loan, not just on paying back the biggest balances,” Deming added. “Because there’s an awful lot of people out there with $80,000 loan balances, who are going to make incomes in the top 1 percent, or close to it.”

Berry, a current senior at the College, said student loan debt at Harvard becomes a larger issue when factoring in graduate school. Roughly 83 percent of undergraduates at the College will return to pursue additional schooling in the form of graduate or professional degrees, according to a report published by the University’s Office of Career Services.

“I think the conversation is different if we talk about the graduate schools. That’s a bigger issue, especially because grad school is really expensive — I think that’s where we could extend the conversation,” he said.

Cynthia E. Ahmed, Vice Chair of Policy for the Harvard Graduate Council and a current student at the Law School, said there exists a division in the way student loan debt impacts graduate students across the University. Ahmed highlighted that, though loan debt can be extensive for certain individuals, it is not necessarily a universal issue. 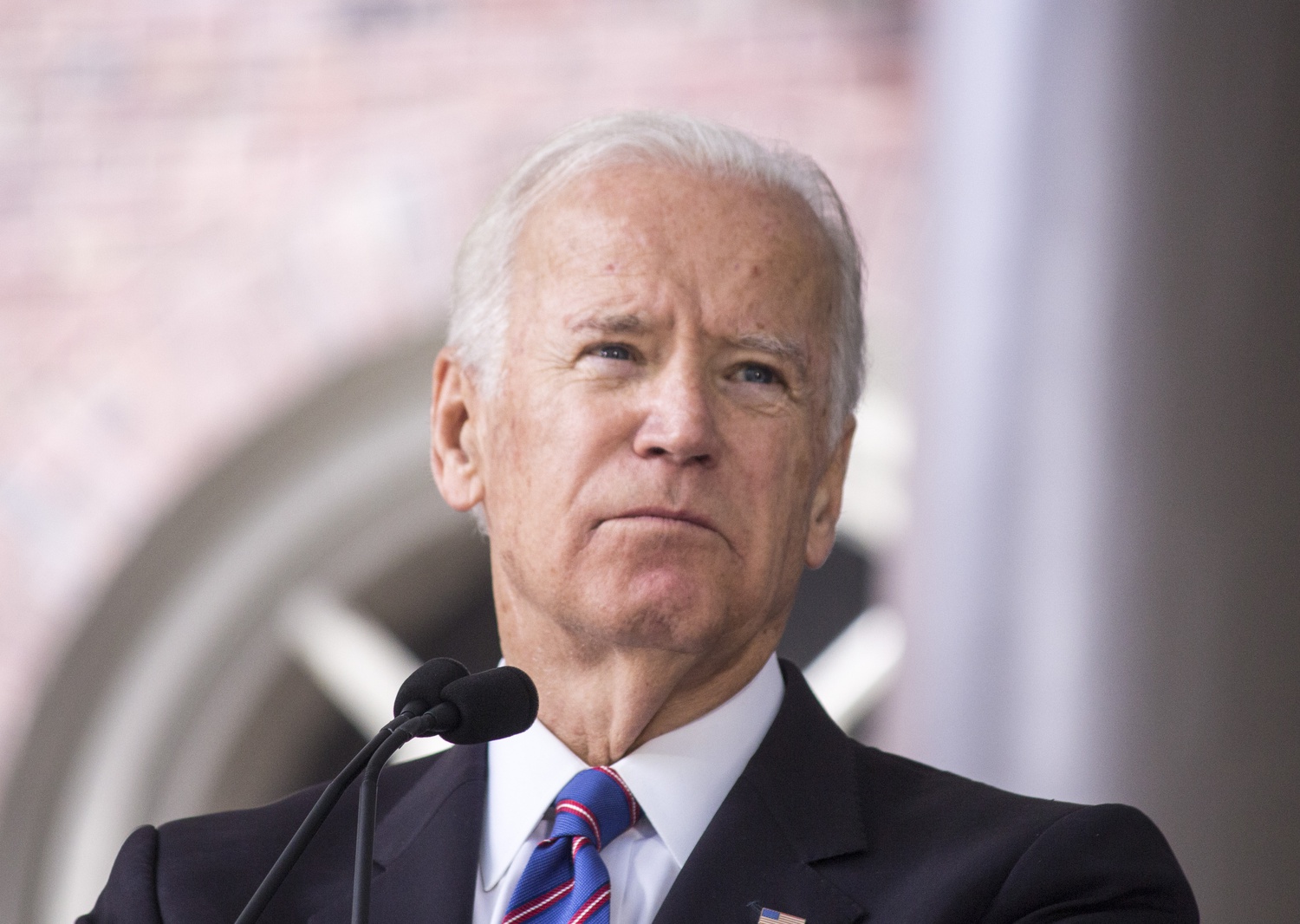 Victoria J. “Vicki” Dzindzichashvili, a Master of Public Policy candidate at the Kennedy School on leave during the Covid-19 pandemic, said she believes that, given the financial hardship of graduate school students, Biden’s current plan is not enough.

“I feel disappointed,” Dzindzichashvili said. “I believe that public higher education, at the very least, should be completely free. So when I see the administration saying only $10,000, I unfortunately feel like they’re not being serious about helping working-class people.”

Of the Kennedy School’s 569 Class of 2019 graduates, 4 percent went on to work in state government and 20 percent in the federal government, compared to 37 percent of graduates who worked in the private sector, according to an employment report published by the Kennedy School in 2019.

‘Putting a Band-Aid on a Giant, Seeping Flesh Wound’

The use of debt cancellation as a sweeping economic measure fails to account for the structural issues undergirding student loans, according to Berry. He described loan cancellation as “putting a band-aid on a giant, seeping flesh wound,” when the genuine reform needed is a “complete operation.”

“The proposal to forgive student debt is more like going to Rite Aid and buying a band-aid and putting it on and saying, ‘Oh, you’re okay now,’” Berry said. “The underlying issue is just that college is much too expensive.”

For some, educational reform starts not on Capitol Hill, but in classrooms themselves. New York University business professor Vadim S. Revzin — who also founded School16, a program that helps individuals find jobs in the tech industry — highlighted the importance of educational models that prioritize experience-based, interactive learning.

Jack A. White III ’23, the president of Harvard Undergraduates for Bipartisan Solutions, said the incoming administration should aim to capitalize on affordable educational opportunities like community college.

“One of the biggest problems is that, even though these affordable community college pathways exist, there’s a societal racket — or a cultural racket — that is just telling people, ‘You can’t go to community college,’ or that there’s something wrong with it,” he said.

White added that Biden should use his presidential authority to reduce the cultural stigma associated with community colleges and other alternative educational pathways.

“I think that’s the core of the problem. And maybe that’s something that the moral leadership of the President can address from the bully pulpit,” he said.

Amen H. Gashaw ’24 said she is hopeful that substantive progress on the issue of student debt will be made following Biden’s inauguration, particularly because there exists a consensus along party lines in Congress.

“It’s really rare that we have an issue upon which both parties agree that there’s a problem here, and we need to do whatever we can in our power to help alleviate this burden on Americans,” Gashaw said.

“That underlying sense of agreement will definitely be helpful in allowing Republicans and Democrats to cooperate, especially in the Senate where the vote margin is incredibly tight. So I am optimistic,” she added.

Despite the complex challenges underlying the issue of student loan debt, Justin J. Bloesch, a Ph.D. candidate in the Economics department, also said he is broadly optimistic for the Biden administration’s ability to tackle the issue.

“It has been put on the table as a political issue in a way that it hasn’t before,” he said. “And it makes sense — it’s student loan debt. It’s one-and-a-half trillion dollars.”