As the sun sets on Donald Trump’s term, Republicans at Harvard hope to revive their party’s traditional emphasis on conservatism. At the same time, they believe the past four years have created a specter that will loom over them as they engage in campus discourse.
By Natalie L. Kahn and Taylor C. Peterman 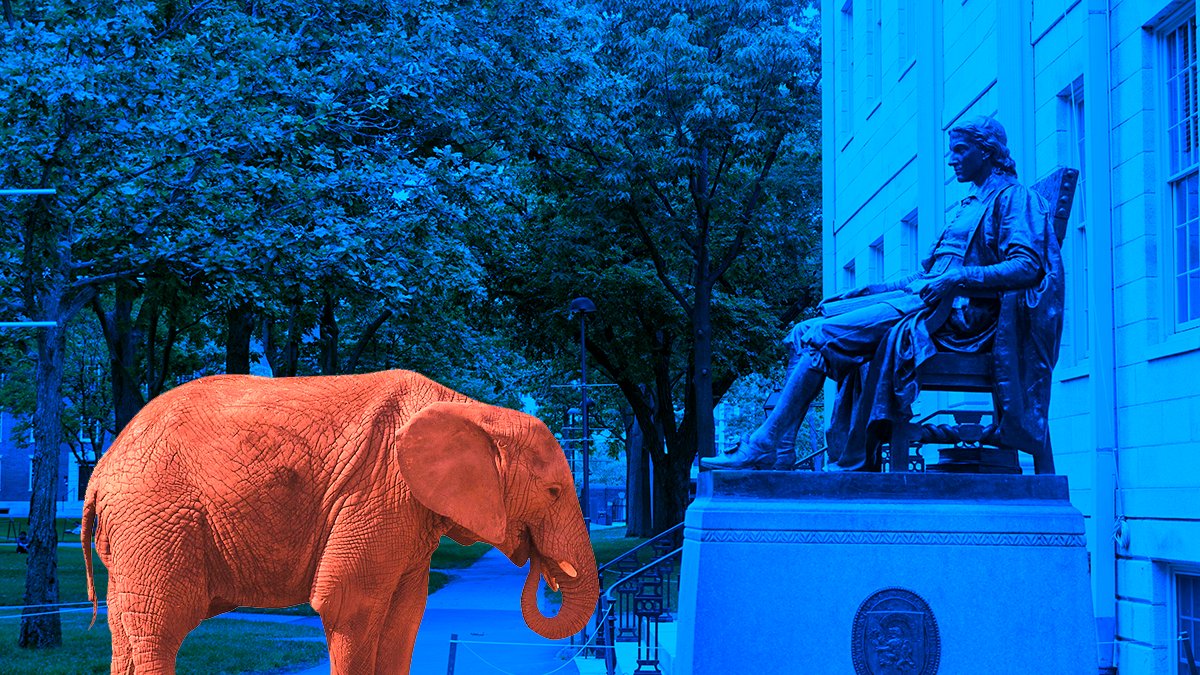 Though Trump will leave the White House on Jan. 20, his influence over the country — and Harvard's political environment — will surely not cease. By Matthew J. Tyler

Fallout from the Jan. 6 storming of the U.S. Capitol, which left five people dead, reached Harvard’s Institute of Politics the following week. On Jan. 12, the bipartisan organization dismissed U.S. Representative Elise M. Stefanik ’06 (R-N.Y.) from its top leadership committee for her baseless claims of voter fraud.

The IOP’s move received an array of responses — including praise and criticism. Though Kennedy School Dean Douglas W. Elmendorf stated the decision was nonpartisan, it nonetheless surfaced questions about the commitment of the organization — and Harvard more broadly — to bipartisanship: with Stefanik’s removal, the Republican minority on the Senior Advisory Committee becomes even smaller.

“I think it’s important for Harvard and the IOP to continue to bring conservatives on campus and to sponsor them in some degree so that there is a presence and a voice for that school of thought,” Kyle A. Englander ’23, president of the Harvard Republican Club, said. “Because, ultimately, close to half of the country still identifies with that party.”

“We have to recognize that party. We can’t just shut it out,” he added.

Scarce as conservative students may be, conservative faculty are even fewer. A March 2020 Crimson survey found only 1.5 percent of Harvard faculty reporting they consider themselves “conservative” or “very conservative.”

President Donald Trump’s four years in office – which ended in his peddling of false claims of election fraud and a violent riot in Washington D.C. led by his supporters – have further fractured an already fragile campus discourse. Though Trump will leave the White House on Jan. 20, his influence over the country — and Harvard’s political environment — will surely not cease.

As the sun sets on Trump’s term and Joe Biden — who has vowed to bring the country together — is inaugurated as the 46th president of the United States, Republicans at Harvard hope to revive their party’s traditional emphasis on conservatism. At the same time, they believe the past four years have created a specter that will loom over them as they engage in campus discourse.

On Jan. 6, Harvard students and faculty scattered around the globe watched in horror as a pro-Trump mob stormed the U.S. Capitol forcing lawmakers to go into hiding.

In a rare display of bipartisanship that same day, the Harvard Republican Club, Harvard College Democrats, and the Harvard Undergraduates for Bipartisan Solutions issued a joint statement calling on President Trump to “forcefully denounce those inciting violence and interfering with democracy at the Capitol.”

Englander, the HRC president, said he hopes the Capitol riots will be a turning point for the country — in the direction of unity.

“I hope, from a more optimistic perspective, this can be a watershed moment, and moving into the Biden presidency, we can really recognize how fractured we are right now as a country,” Englander said.

Though Englander hopes Republicans and Democrats will come together, bipartisan unity on Harvard’s campus remains elusive.

In November, an open letter circulated online calling on Harvard to enforce “accountability guidelines” when inviting former members of the Trump administration to campus. It was met with outrage by some Trump allies with ties to Harvard. 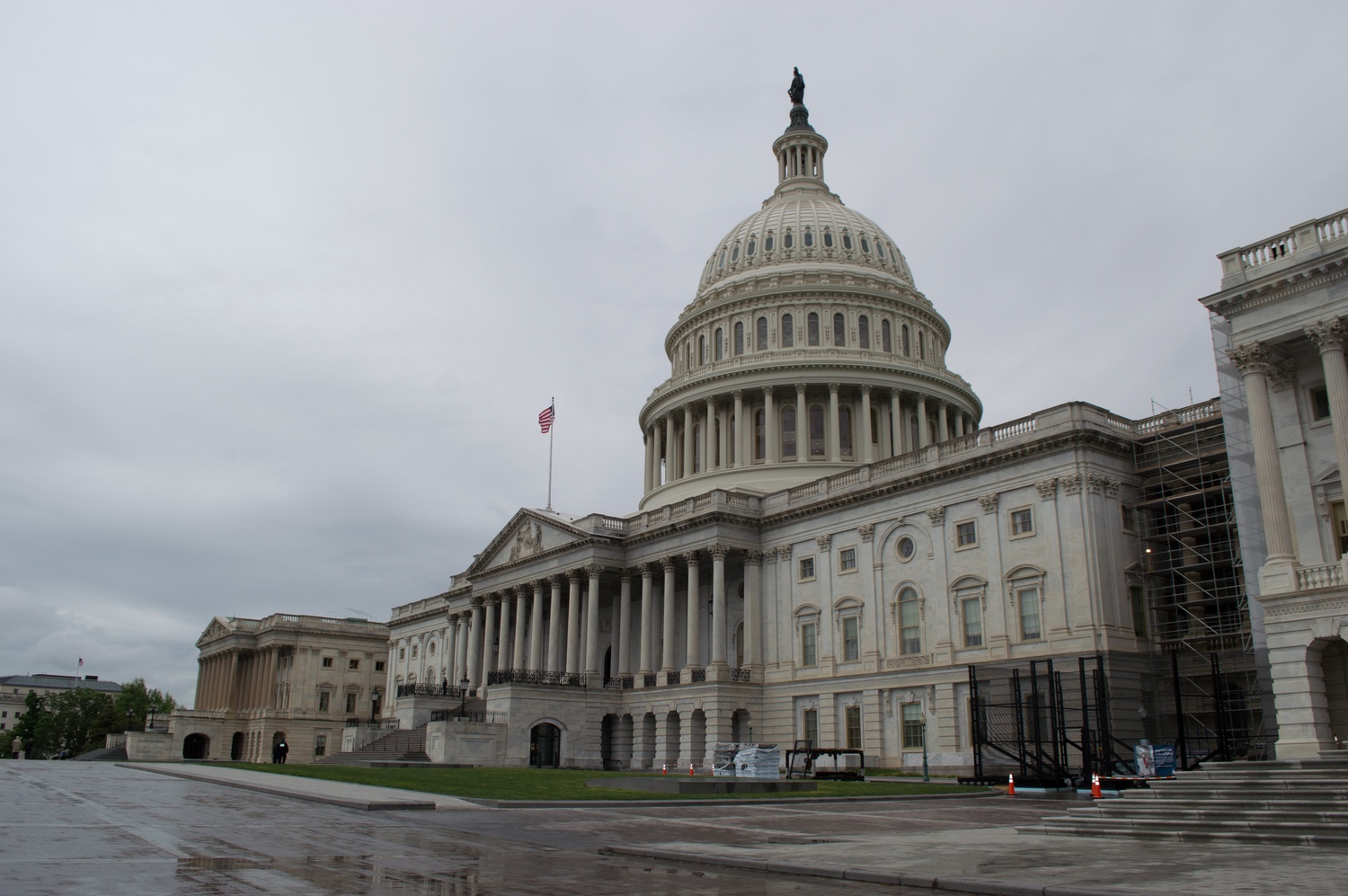 Three Harvard political groups, including Democrats and Republicans, issued a rare joint statement denouncing the riot at the Capitol on Jan. 6. By Leah S. Yared

Oluwatobi I. “Tobi” Ariyo ’22, a former member of the HRC who leans conservative, said he supports mandating Trump officials who come to Harvard’s campus to write a “statement of admission of any guilt or contribution they might have had to unjust outcomes.”

“Accountability is necessary if we do want to see a better state just discourse-wise and climate-wise in the nation and in college campuses, but also just openness to communicating and being civil,” Ariyo added.

Regarding the IOP’s decision to dismiss Stefanik, Ariyo said he was “really torn.” He suggested an option in which Stefanik could have retained her position as a conservative voice on the Senior Advisory Committee if she issued a mea culpa for peddling false claims about election fraud and acknowledging how those statements emboldened the rioters.

“I think that would have been a healthy alternative to demand her to do rather than just sacking her,” Ariyo said. “It’s definitely not great seeing the conservative voice being taken off, but that’s not to say there aren’t conservative voices that could replace her,” he added.

Treasurer of the HRC Loren M. Brown ’23 said he disapproved of the IOP’s decision to remove Stefanik.

“I disagreed with her decision to vote against the certification in a couple of states,” Brown said. “But, nonetheless, I think she’s an important politician – an important conservative one — and still contributed a lot in her [time at] Harvard, and I think should have been retained, but was pretty much just forced out because of a difference.”

Wesley L. Donhauser ’21, a former president of the HRC, said he hopes the IOP will take steps to recognize the importance of conservative representation on campus.

“I only ask them to replace her seat with another Republican voice,” he wrote in an email. “This is not only for the case of making us conservatives feel welcome and valid in IOP spaces, but the presence of Republican voices at the IOP should have significant education value for all students even if it is just to challenge their beliefs and expose them to new ideas and perspectives.”

A. Blake Barclay ’22 also said he believes educational merit resides in Harvard welcoming figures with whom the majority of its students may disagree.

“If we don’t bring people who disagree, then it’s a disservice to all these students who will encounter different views in the real world but aren’t encountering them at college,” he said. “Probably the vast majority of America doesn’t think like people at Harvard think. Not probably — definitely.”

A Return to 'Traditional Conservative Principles'

As the Republican Party struggles to find its footing following Trump’s departure from office, conservatives on campus must evaluate what place, if any, Trump has in their party’s future.

Grace K. Bannister ’21, who formerly served as vice president of HRC and IOP director of membership, said she believes the absence of conservative representation among the University’s top brass — including faculty and administrators — contributed to a rise in support for Trump among some right-leaning Harvard students.

“I think we’ve seen this rise over the past four years of the quote, unquote — I’m going to call it — ‘the conservative victim,’ where people want to be really angry about the fact that they don’t feel like they have anyone listening to them,” she said. “That’s where we’ve kind of seen the growth of vocalness of Trump-supporting Republicans on Harvard’s campus.”

“People feel like they need to be really vocal and kind of counter the culture,” Bannister added.

Though Trump has been the leader of the Republican Party over the past four years, his big government and spending policies do not necessarily fit the mold of conservatism, students and faculty said.

Fried, who is involved with the Harvard Law School Federalist Society, defined conservatism as “a respect for existing institutions, precedent,” and “a willingness to change when that seems appropriate, but considerable reluctance to come to that conclusion.”

Harvard students and affiliates at the Institute of Politics watch the inauguration of Donald Trump on Jan. 20, 2017. By Casey M. Allen

Still, Mansfield maintained people who voted for Trump could still view him as the better choice.

“He’s not the worst person in the country,” Mansfield said, referencing Trump. “Worse than Trump are the left of the Democratic Party. So one could easily balance those two evils and come up with Trump as the lesser of them.”

Ariyo said he witnessed a “pretty drastic” change in HRC from his freshman to sophomore year.

“I just felt like the party was a lot more encompassing of varying conservative ideologies and varying conservative stances,” he said. “The club on campus has departed from that and allied itself with the national Republican Party in just trying to justify anything and everything that Trump does.”

Some students said they believe Trump’s defeat presents a path for Republicans to return to “traditional conservative principles.”

“I believe conservatives will take this opportunity to do what they should have been doing all along,” Donhauser, HRC’s former president, wrote. “Preserving a historical intellectual tradition and not buying into the ideological class warfare that is currently in vogue.”

'Trump Out of the Picture'

Despite Biden’s promise to unify the nation, Brown, HRC’s treasurer, said he is unconvinced that a Biden administration will ameliorate partisan polarization on Harvard’s campus.

Barclay said he believes the Trump presidency has worsened the political climate on campus, noting, however, that he believes shifts in both parties are to blame.

“I definitely feel like it’s negatively impacted the climate for everyone because when he does say such hateful things, it’s understandable that people get offended by anyone that could be associated with that,” he said. “While I don’t associate myself with him, it is a difficult distinction to make clear to people sometimes.”

Englander similarly said he feels Trump’s nature as such a polarizing figure has made it difficult to express one’s ideology as a conservative student on campus.

“I definitely haven’t been unabashed about the viewpoints I have, and I think a lot of that had to do with how polarizing a figure Trump as a president was,” he said. “I think that bled off into a generalized animosity towards conservatives.”

Brown said he believes there will be a “lingering bias against conservative ideas and values in the classroom."

Mansfield echoed Brown, noting that his concern about a lack of discourse stems from the “intolerant” left rather than the “much more tolerant” liberal wing of the Democratic Party at Harvard.

“Harvard is the Democratic Party. And so it is divided between liberals and leftists. And the leftists are quite intolerant,” he said.

Englander, though, said he is optimistic that conservative viewpoints will be met with more receptiveness at Harvard going forward.

“I’m hoping that with Trump out of the picture and some of the animus that comes with him, that could maybe change and there could be more receptiveness to that point of view,” Englander said.

—Staff writer Natalie L. Kahn can be reached at natalie.kahn@thecrimson.com.