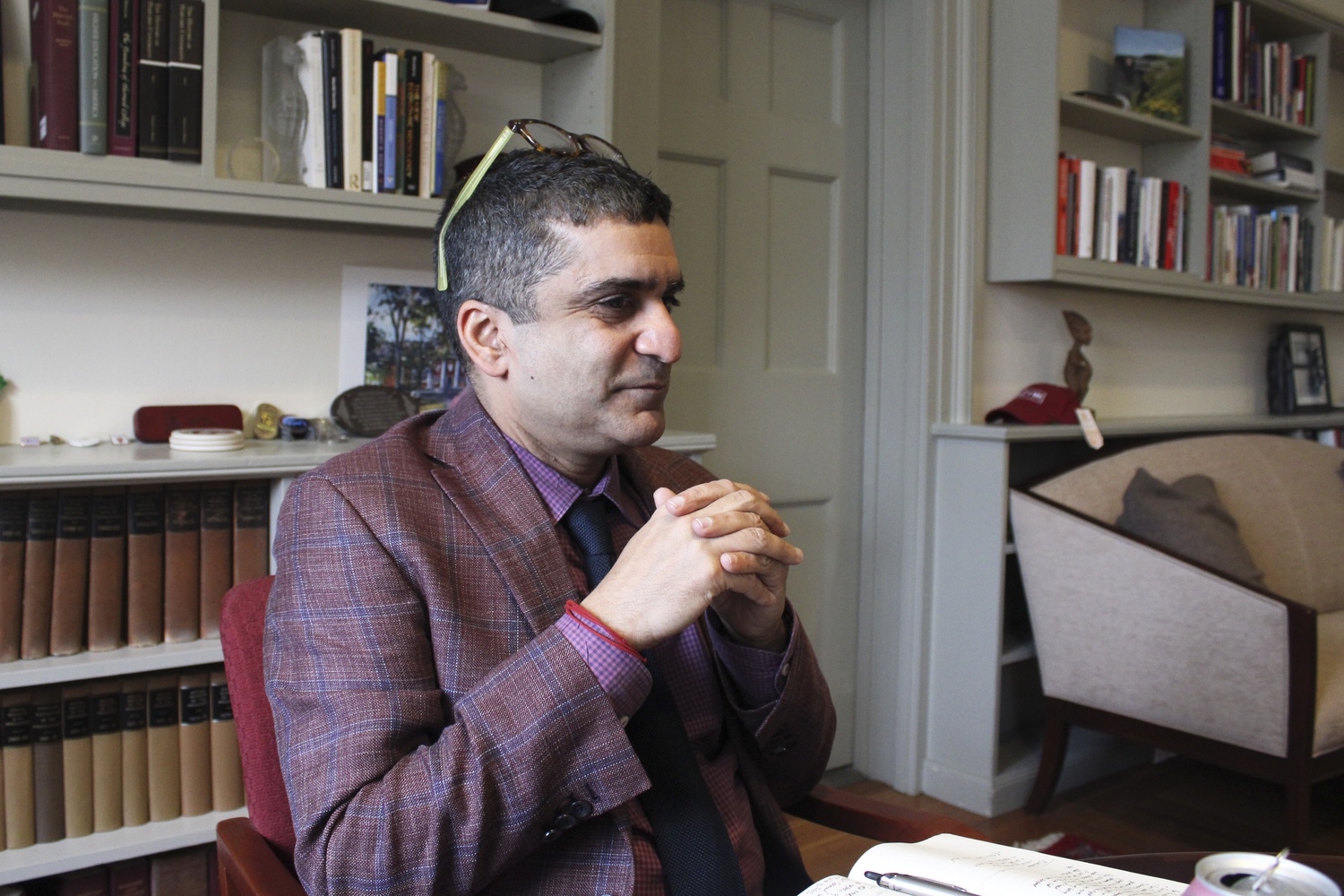 Dean of the College Rakesh Khurana sits in his office in University Hall during an interview. By Shera S. Avi-Yonah
By Juliet E. Isselbacher and Amanda Y. Su, Crimson Staff Writers

University President Lawrence S. Bacow announced Monday afternoon that Harvard has dropped its social group sanctions as a result of a recent Supreme Court decision on sex discrimination, dismantling Dean of the College Rakesh Khurana’s most high-profile undertaking since beginning his post.

In 2016, Harvard rolled out its social group policy barring members of unrecognized single-gender social organizations — starting with the Class of 2021 — from holding leadership positions in student groups and athletic teams and from receiving College endorsement for certain postgraduate fellowships.

The policy, Khurana’s brainchild, was intended to reconfigure campus life by minimizing the influence of elite, male-dominated spaces. His history with those spaces is long, stretching back well before he became Dean.

As early as 2011, Khurana criticized the clubs for siphoning energy from house communities.

“I’m always suspicious of a club that builds itself on gendered exclusivity,” he said at the time. “It’s so much easier to hang out with people who remind you of your favorite person — yourself — than it is to figure out how to create an organic real community that has strength in its diversity.”

In 2014, he characterized a circulated party invitation sent by the Spee Club as “offensive, crude, and sexist.” He asserted that the invitation, which featured women in underwear, ran “counter to the values we hold as a community.” Before Harvard officially announced the sanctions, Khurana had issued an April 15 deadline for final clubs in March 2016 to inform administrators whether or not they planned to go co-ed.

When groups failed to comply, and the sanctions went into effect, Khurana lambasted the final clubs as bastions of male privilege and hot spots of predatory behavior towards women.

“[T]he discriminatory membership policies of these organizations have led to the perpetuation of spaces that are rife with power imbalances,” he wrote at the time. “The most entrenched of these spaces send an unambiguous message that they are the exclusive preserves of men. In their recruitment practices and through their extensive resources and access to networks of power, these organizations propagate exclusionary values .”

Shortly after Bacow’s announced the dissolution of the social group policy on Monday, Khurana reiterated his defense of the sanctions as a measure to combat gender discrimination at the College in an email to students.

“While Harvard is withdrawing the policy, I still strongly believe that gender discrimination undermines our community’s values,” he wrote.

Though the policy Khurana championed failed to last long enough to face even its first review period — scheduled for its fifth year — rarely did a significant period pass during which it failed to generate news.

Khurana first floated the possibility of the sanctions in April 2016, at a behind-closed-doors meeting with final club leadership.

Marking a historic policy reversal for the University, the decision drew national attention and incited polarized reactions from students, faculty, varsity coaches, and members of the Harvard Corporation. In 1984, Harvard had issued a comparable ultimatum for clubs to go co-ed, which spurred mass disaffiliation from the University. In the interim decades, administrators largely opted to avoid involvement in final clubs and Greek groups.

After some professors alleged faculty members were not properly consulted during the policy's formulation, Khurana co-chaired a committee to revise or replace the sanctions in 2017. The committee released its preliminary recommendation in July, opting to ban all social groups, including gender neutral ones.

Though the committee claimed strong majority support for the proposal, The Crimson reported in July that only seven members of the 27-member committee voted in favor of the ban.

Three months later, the committee published a final report suggesting three options in the bam’s stead: The original May 2016 policy, a complete ban of single-gender final clubs and Greek organizations, or a set of “other possible solutions.”

In December, the Corporation, the University’s highest governing body, voted in support of the sanctions. This atypical intervention in undergraduate life was aimed at ensure the decision extended beyond Faust’s presidency after she stepped down in June 2018.

In the four years since their inauguration, the sanctions have forced nearly all of Harvard’s all-female social organizations to open their doors to men, while largely failing to change the membership policies of male-only groups.

Every single all-women’s social club eventually opted to go co-ed, though Harvard’s chapter of Alpha Phi later returned to campus as a single-gender group after a hiatus.

Meanwhile, several male-only fraternities and final clubs — including the Porcellian, the A.D., the Fly, the Owl, and the Phoenix S.K. — continued operating in defiance of Harvard’s rules. The Fox Club flirted with co-ed status at several points, ultimately choosing to remain all-male after facing resistance from its graduate board.

In late 2019, the sanctions spawned a pair of lawsuits in state court and federal court by a group of fraternities, sororities, and anonymous students. The federal filing accused Harvard of breaching Title IX, a federal law designed to protect against gender-based discrimination in education.

After the Court’s decision, the Harvard Corporation recognized that its rationale might have significant consequences for the sanctions based on U.S. District Judge Nathaniel M. Gorton’s legal reasoning in his decision to deny Harvard’s motion to dismiss the suit in August 2019. Gorton accepted the plaintiffs’ legal theory that the policy, although adopted to counteract discrimination based on sex, is itself an instance of discrimination based on sex.

After University administrators concluded the Bostock decision effectively determined that Harvard would lose the lawsuit and “be legally barred from further enforcing the policy,” the Corporation voted to rescind its prior approval of the sanctions.

It remains unclear whether former single-gender organizations will abandon their co-ed status and re-adopt more restrictive membership policies in response to the change.

Khurana concluded his email Monday afternoon by urging students to act on the principles that fueled the sanctions, even in their absence.

“I hope that for each of you that work will begin by examining the organizations you participate in, and asking yourselves who has access, and why. And I hope that you will consider making changes from within those organizations even in the absence of a College policy,” he wrote. “I am committed to working with you as you think about what kind of organizations you wish to build, both on and off campus.”