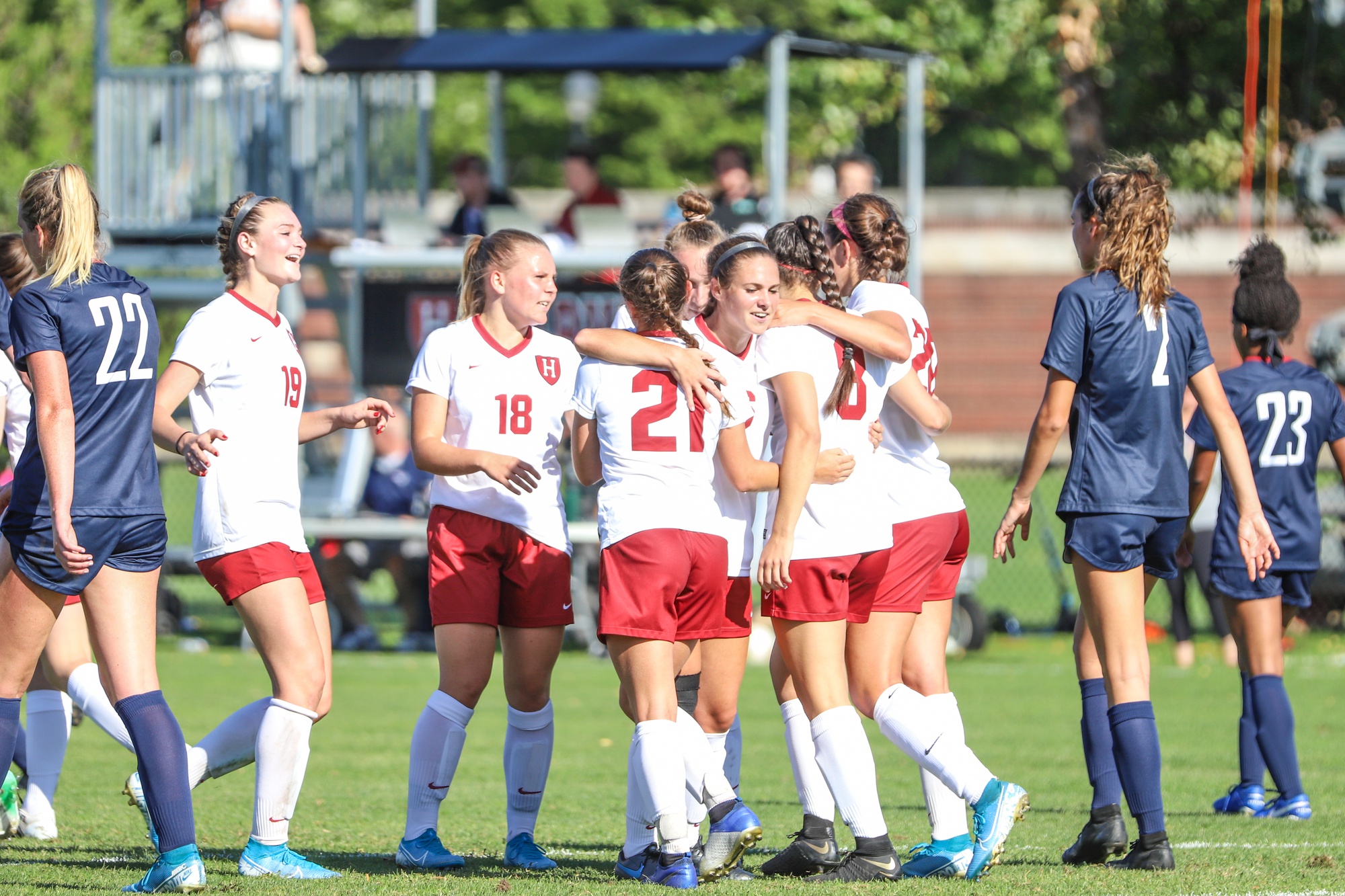 By Lev Cohen, Crimson Staff Writer
Harvard celebrates its decisive goal in a 1-0 win over Penn last season. The Crimson program will look to do more celebrating as it returns most of its 2019 core and will get a boost from a program-best recruiting class. By Quinn G. Perini

Harvard women’s soccer’s Class of 2024 recruiting class is arguably the best in program history, with an incoming eight-member group ranked No. 5 in the nation by TopDrawerSoccer. Among the recruits are three of the country’s top-12 prospects and six players with national team experience.

“It was almost like this unicorn class,” said head coach Chris Hamblin, “where the timing was right and we were able to get the best players who also happened to be the best students.”

The Crimson’s three top American recruits are midfielder Hannah Bebar, defender Smith Hunter, and forward Ainsley Ahmadian, the former two of whom have been ranked as high as No. 1 and No. 3 respectively by TopDrawerSoccer. All three are teammates on the U20 U.S. National Team; two other recruits, midfielder Josefine Hasbo of Denmark and forward Cayla McFarlane of Pasadena, Calif., have made appearances for their full national teams (McFarlane for Trinidad and Tobago). Rounding out the class are Canadian U20 goalkeeper Anna Karpenko, defender Taylor Fasnacht, and forward KaiLan Mackey, evidence of the class’s positional balance and substantial depth to accompany its high-end talent.

“I think what you look for is kids that are in good environments on a day in and day out basis,” said associate head coach and recruiting coordinator Mike Calise. “A lot of these kids come from some of the top club teams in the country, and the fact that they’re on the national teams gives us more avenues to watch us play and see them competing against the top players in the world. And when you see them compete on the national team scale and they do well at that level, it’s a pretty good indicator that they’re going to translate well at the college level.”

Until recently, it had been difficult for Harvard to convince top recruits that it, like perennial powerhouses Stanford, UCLA, North Carolina, Virginia, and Georgetown, could provide them with both a high-level education and a chance to play college soccer at a high level. The team’s mid-major profile seemingly barred it from competing with the best programs for the top recruits. But the last handful of years have begun to show cracks in the image of the Crimson — and of Ivy League schools in general — as a second-tier women’s soccer program.

“We’ve always been trying to promote that you can do both at Harvard,” said Hamblin. “You can have a high athletic experience, play professionally, play for your national team, and also get a world-class education. We’d never been able to prove that until the 2016 season, 2017 graduating class when [Sky Blue FC forward] Midge Purce ‘17 went professional, and Lizzie Durack ‘17 played for England and played two years professionally at Chelsea. For us, being able to say yes you can, and here’s the evidence, that I think was the tipping point for us.”

Purce’s career trajectory — she earned her first cap for the USWNT last year — serves as evidence to top youth soccer players that they can go to Harvard to fulfill dreams of going pro, not sacrifice them. And it is not just the Crimson: four Ivy League programs produced top-50 recruiting classes, a record-breaking feat that comes in the wake of a year in which the Ancient Eight trailed only the Pac-12 in winning percentage and finished fifth in RPI, a schedule-adjusted appraisal of team and conference strength, ahead of the Big Ten and within shouting distance of the SEC and Big 12.

“I think in the past it’s been a hurdle for us, that some of those top recruits have said: ‘I love soccer, I want to play pro, I want to play for the national team, and I don’t think I can do that within the Ivy League environment,’ and I think we’ve kind of smashed that ceiling now,” Hamblin said. “We don’t look at ourselves as a mid-major anymore. And I’m not going to say we’re the same as the ACC or the Pac-12 — we’re not — but we’re knocking on the door and we’re getting closer every year.”

But while the league seems to be improving steadily, the strength of this year’s recruiting class is unlikely to be repeated anytime soon. A number of factors coalesced to create the perfect environment for Harvard to excel in recruiting to the extent that it did this year. Chief among them: the fact that Bebar and Ahmadian, two of the best prospects in the country, happen to be best friends, were classmates at Waubonsie Valley, a high school in the Chicago suburbs, and have been teammates from a young age. And beyond that, the fact that the teammates are both academically driven and long had a goal of playing together at the next level.

“I’ll tell you what. [Hamblin] spoke about a unicorn — that’s a unique one,” said Calise of the Chicago duo. “Because not only are they best friends but they’re also elite soccer players and also incredibly academic. So it was really a perfect situation, and I think what we appreciated with them is that they were pretty honest from the beginning that they wanted to go together. That’s not always the case when you’re recruiting kids. We obviously loved them as players, the question was going to be whether they fit the academic model for us. And I think it was pretty amazing that they both knocked it out of the park academically. They were very, very good applicants for Harvard even without soccer, which is a unique situation.”

The recruits are not exactly joining an unproven roster. Returning is most of the team that went 12-3-1 overall and 5-1-1 in the Ivy League last season, finishing just behind a talented Brown team in the Ancient Eight standings. The only departing seniors who received substantial playing time last season were goalkeeper Kat Hess and central defender Kimaya Cole. Murphy Agnew, last year’s Ivy League Offensive Player of the Year and the Crimson’s fulcrum, returns as a senior along with three other All-Ivy honor recipients. Among those are Gabby DelPico and Angela Caloia, who as first-year last season provided much of Harvard’s offensive punch, combining to score 13 goals and assist 17 more in 16 games. Given the speed bumps that first-years often experience in their first seasons at the college level, it is reasonable to expect even more production moving forward from the sophomore forwards, who both showed assuredness on the ball and combined well with Agnew.

With all but two starters returning and the Crimson’s entire starting midfield and attack still intact, the new recruits will not necessarily find instant playing time at the next level despite their pedigrees. The competition for places in the team will create conundrums for Hamblin, who is entering his fifth season at the helm of the program and has never had a team this deep. But the playing time headaches will likely produce a team that is more balanced, deeper, and healthier late in the season.

“Nothing makes teams more successful than knowing that there’s someone on your toes every second of every day trying to get that playing time,” said Hamblin. “And it’s very difficult to win championships and be successful over the course of a season with just a small group of players. You need a whole roster, you need a whole group, and we’re now at a point where I think we’ve got really good balance in age, in positions, in experience. And it’s going to be ultra-competitive. It’s going to be the most competitive we’ve ever had.”

All of this, of course, is contingent on the season taking place as scheduled in the fall. As of publication, it still remains up in the air how the university and the NCAA intend to handle the fall semester. Perhaps the coronavirus pandemic will keep the incoming recruiting class from suiting up in the fall. But whenever the “unicorn” class does make its Harvard debut, it will give spectators a glimpse of the Crimson’s potential and, perhaps, of the Ivy League’s future.