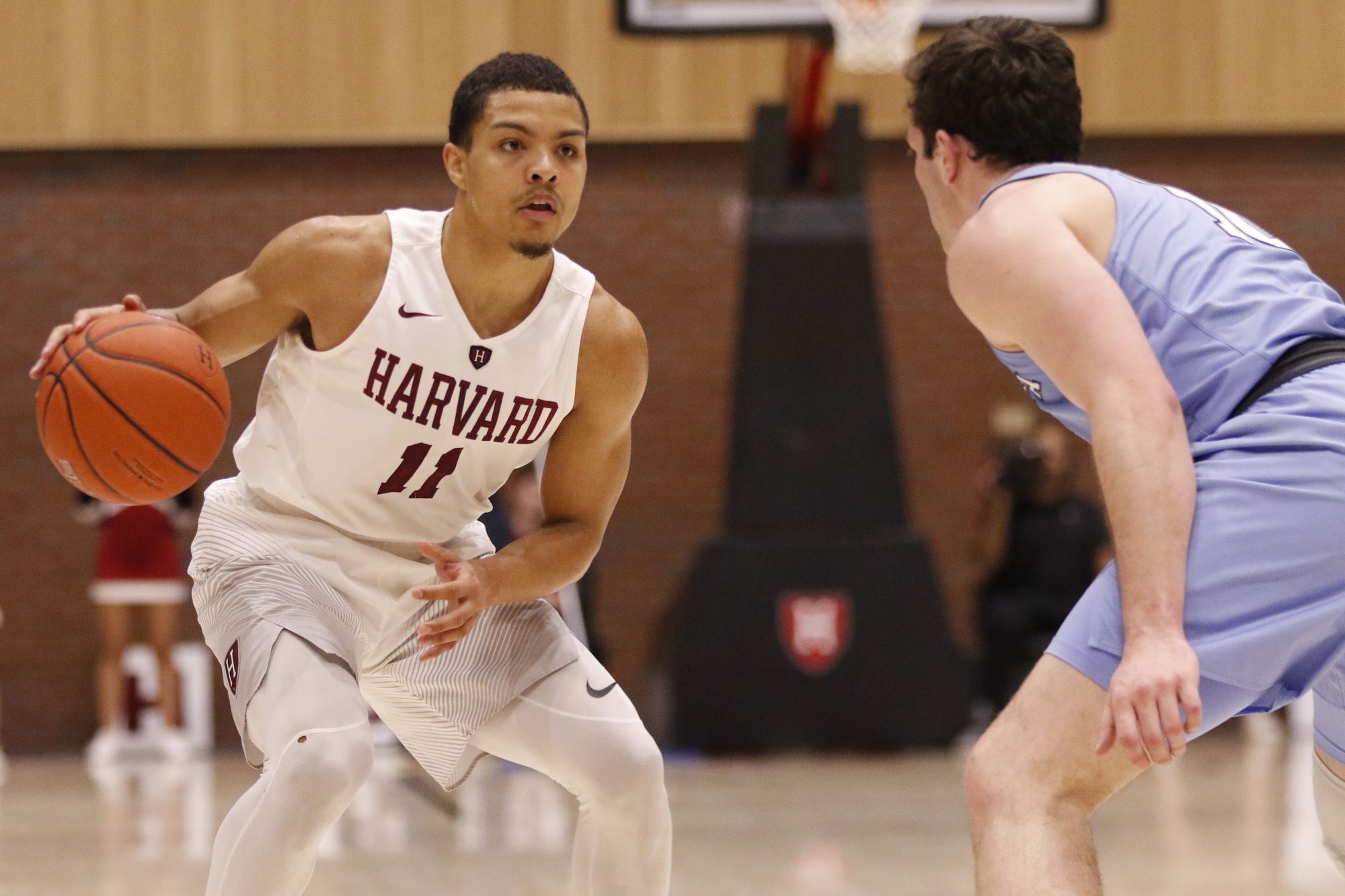 After a Harvard basketball career that included Ivy League Rookie of the Year, two first-team All-Ivy appearances, and almost 17 points per game across his four years in Cambridge, Aiken will play next season as a graduate transfer for the Pirates, a decision he announced this afternoon on his Instagram page.

Aiken is expected to receive a medical redshirt for his foot issues this year, and will be immediately eligible for the 2020-2021 season.

“Creating an experience that I could share with my loved ones was something I always dreamt of,” Aiken told the Crimson prior to publicizing his decision. “There’s a sense of pride that’s been manifesting inside of me because of this decision and I am so proud of that feeling.”

The talented guard was ranked No. 86 nationally and No. 19 amongst point guards coming out of high school, turning down offers from Seton Hall, Miami, Auburn, Florida State, Creighton, and other Power Five schools to be a part of Coach Tommy Amaker’s vaunted recruiting class. Four years later, Aiken pared his transfer list down to Michigan, Maryland, Iowa State, and Seton Hall, before deciding to return home to his native state of New Jersey and the school that recruited him from the start.

Aiken played his high school ball at the Patrick School, fewer than five miles from Seton Hall’s campus. The Randolph, N.J., native will now get an opportunity to play his home games at Newark’s Prudential Center, less than 45 minutes from his hometown. It’s hard to imagine a more ideal situation for Aiken, a volume shooting guard who will have large shoes to fill with the departure of Seton Hall’s Myles Powell, winner of the Jerry West Shooting Guard of the Year award.

After passing up a chance to be teammates with Powell four years ago, Aiken has the potential to become the veteran face of a Seton Hall program that has been on the rise under Coach Kevin Willard. The connection between the Patrick School and Seton Hall is, unsurprisingly, strong in the basketball community. Former Seton Hall standout Angel Delgado attended the Patrick School, as did current assistant coach Grant Billmeier.

Like fellow standout senior Seth Towns, who chose to graduate and transfer to Ohio State, his hometown school, Aiken’s final decision to play at Seton Hall reflects a desire to be close to family for his final collegiate season. Both Towns and Aiken experienced repeated injury and adversity over their careers in Cambridge, and, somewhat fittingly, have chosen to spend the end of their careers at the hometown colleges that have recruited them since high school.

“Throughout this process, my main focus was to follow my heart. I am confident in my capabilities as a basketball player and believe that I could achieve success on the court no matter where I play but finding the right school for me that reciprocated that genuine feeling of love meant everything,” Aiken said. “Luckily, I didn’t have to look too far to find what I was looking for.”

Playing in his home state next season, Aiken will join a talented Pirates roster and fit nicely into the space Powell, another capable-shooting guard and creative playmaker, has left behind. Seton Hall finished the season ranked in the top 15, and will provide Aiken the opportunity to play vaunted Big East opposition on a regular basis.

It will be the Power Five basketball lifestyle Aiken once passed on, and an almost guaranteed trip to March Madness, the apex of college basketball that he never had the opportunity to experience at Harvard.

With Creighton and Villanova looking like top 10 teams in 2020-2021, and hard-nosed opposition like Providence, Butler, Xavier, and Marquette always playing tough, the conference schedule will give Aiken the opportunity to play with and against the type of talent he’d encounter in the NBA. He’ll be joining a blossoming Seton Hall program for whom a trip to next year’s Sweet 16 or the Elite 8 should be a realistic expectation.

“This is my final season of college basketball and I’m looking forward to leaving it all out there on the floor every night while representing something much bigger than one individual,” said Aiken. “Hopefully, I can help [Seton Hall] sustain their level of success and achieve great things in the coming season. 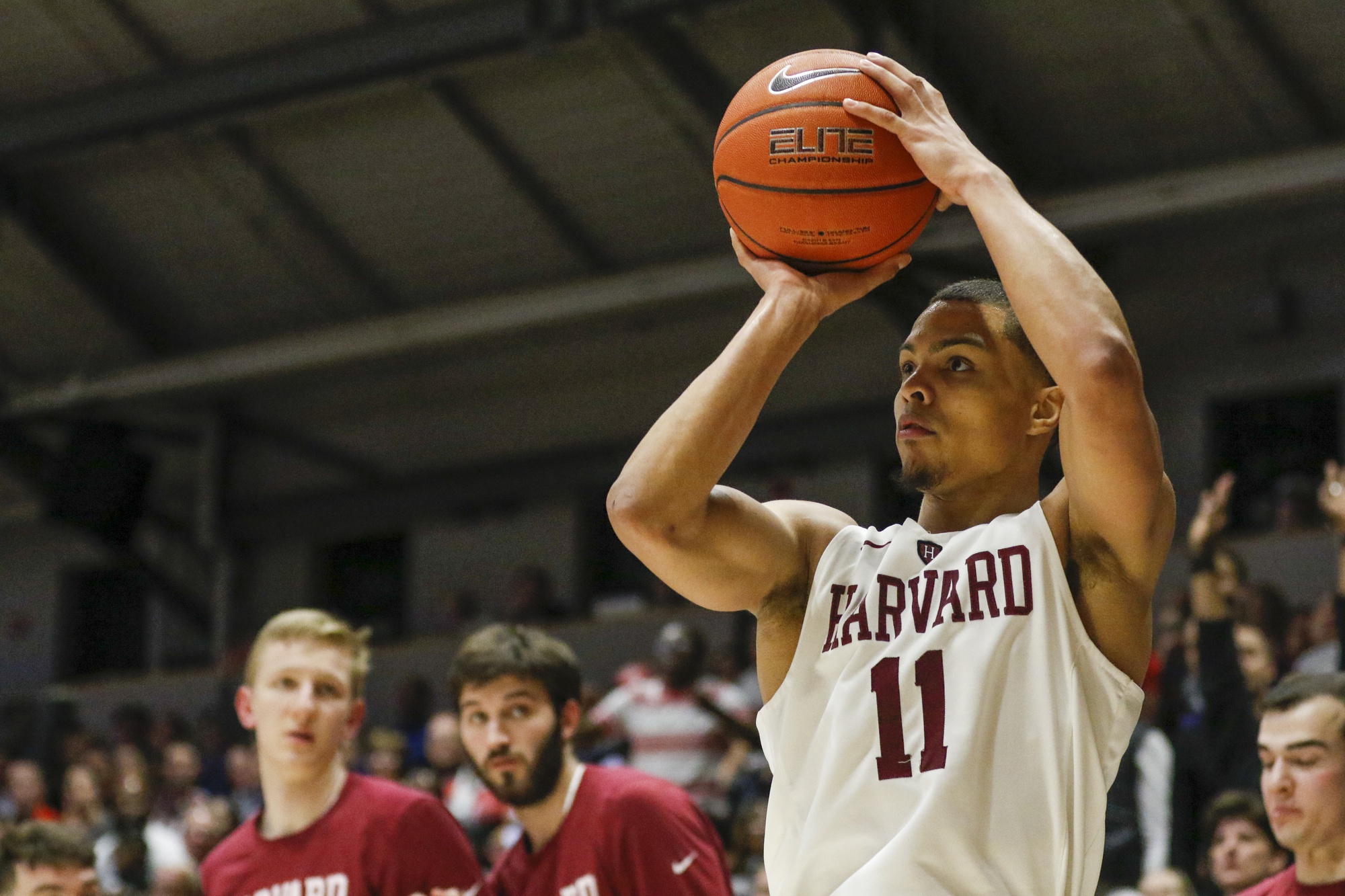 Aiken played in just seven games his senior season, allowing him to apply for a medical redshirt. By Quinn G. Perini

And while next year will bring with it the excitement of new teammates, a new arena, a new coach, and so much more, Aiken will also be leaving a Harvard program that he has poured much of his energies and effort into for the past four years. Those memories and experiences, like traveling to Shanghai to play Stanford his freshman year, to beating Georgetown on the road in the NIT, are not moments he’ll soon forget.

“More than anything I will miss the bonds that I’ve been fortunate enough to create with my teammates along with the shared experiences of chasing that NCAA Tournament berth,” Aiken said. “The journey was never easy for us, as we experienced the unavoidable ups and downs of sport, but we always stuck together and continued to strive for excellence.”

And although that ever-so-elusive NCAA Tournament berth remained out of reach for Aiken and the Class of 2020, who lost their chance to clinch on their home floor this season due to the COVID-19 outbreak, he and his classmates won back-to-back regular season titles in 2018 and 2019, and will leave behind the legacy of one of the best recruiting classes in recent Harvard basketball memory.

Those who follow Harvard basketball will never forget some of the memorable moments Aiken contributed, none more impressive than his double-clutch game-tying three-pointer against Columbia in overtime, good enough to make SportsCenter’s Top-10 plays. It was a night when he scored 44 points, the second-most in Harvard hoops history, and a night inside Lavietes Pavilion where Aiken reminded everyone how capable the former top 100 recruit can be.

Next year, Bryce Aiken will play his basketball for Seton Hall, with games frequently televised on Fox Sports and other nationally broadcasted outlets. He’ll be competing in the vaunted Big East as a graduate transfer, with hopes of a deep NCAA run and perhaps an NBA future beyond.

It feels appropriate for New Jersey’s own to be returning to a school nestled in South Orange. A school who plays their college basketball games at Newark’s Prudential Center — a building fondly known by New Jerseyans as “The Rock”. But in his own words, Aiken will never forget the time he spent at Harvard, turning Friday and Saturday nights at Lavietes Pavilion into show-stopping performances.

“Harvard is truly a transformative place,” Aiken said. “I am blessed to be one of the few people that have been able to represent this program and university on a national stage.”