Here's What Happened with Coronavirus on Campus Today

In January, the World Health Organization deemed a novel coronavirus outbreak centered in Wuhan, China, a public health emergency. As the outbreak continues, The Crimson will update this article with a brief summary of its impact on campus.
By Crimson News Staff 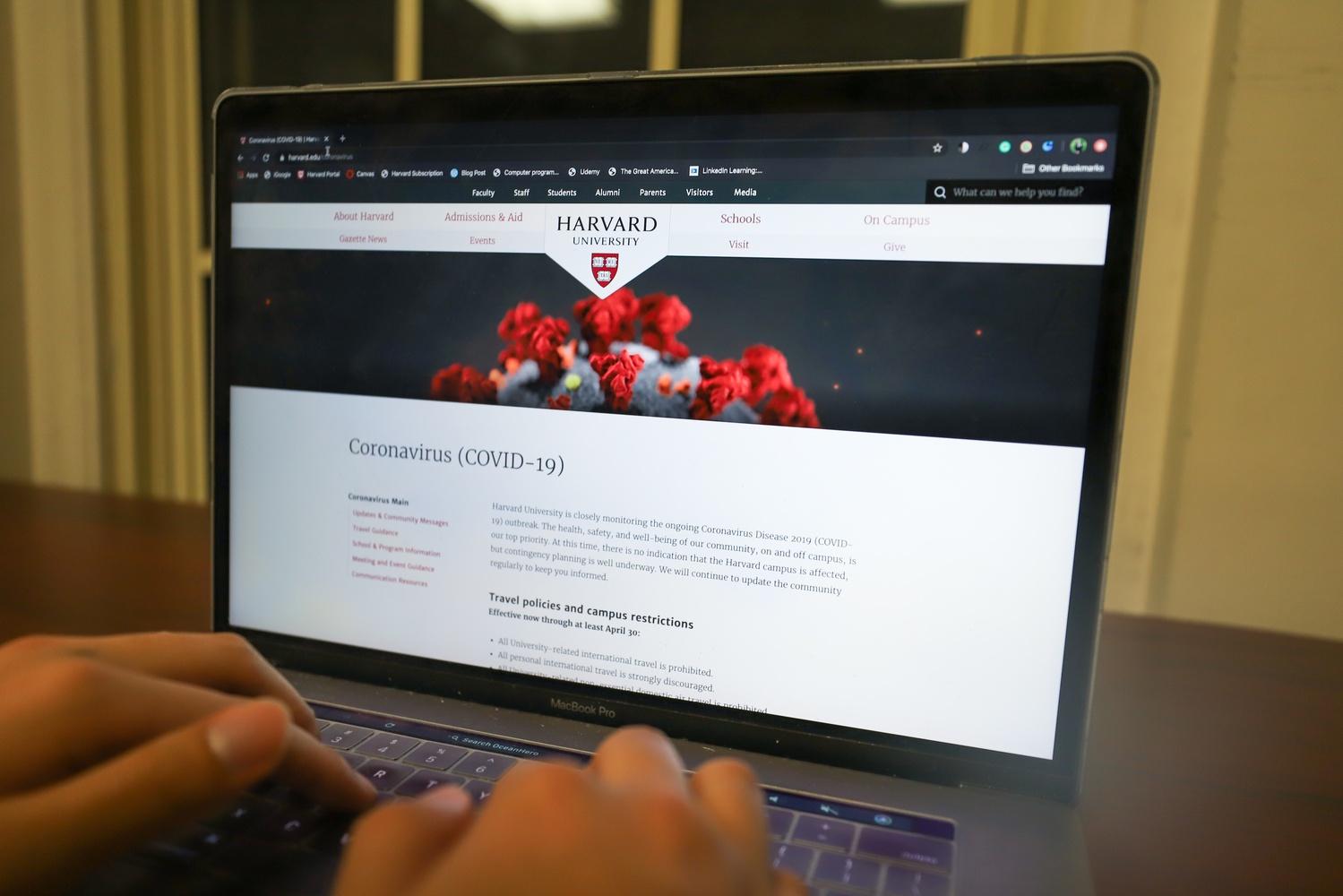 An outbreak of respiratory illness has been caused by the novel coronavirus, which was first detected in China and has now been detected in nearly 90 locations internationally. By Ryan N. Gajarawala

As the number of confirmed coronavirus cases in Massachusetts rises, Harvard administrators have detailed a series of plans to prevent its arrival and contain a potential outbreak on campus. In response to the virus, they have discouraged all non-essential travel and prohibited University-related travel to countries with a Level 3 Warning from the Centers for Disease Control and Prevention.

Associate Professor of Epidemiology at the School of Public Health William P. Hanage said that, while he and many of his colleagues consider the coronavirus outbreak a difficult-to-contain “pandemic,” University affiliates should not panic.

“I've been trying to instill the mantra, ‘don't panic, do prepare’, because panic is just stupid. It doesn't help at all. Nor does fatalism,” he said. “But we ought to prepare for getting ahead of it and stopping it.”

Registrar of the Faculty of Arts and Sciences Michael P. Burke — who is also the co-director of the Harvard College Emergency Management team — said he will provide biweekly emailed updates on coronavirus and any other necessary information to Harvard affiliates.

As the outbreak continues, The Crimson will update this article with a brief summary of its impact on campus.

Several universities across the nation saw increasing restrictions for on-campus gatherings over growing concerns related to the novel coronavirus on Monday.

“We understand that these and other measures will cause significant disruption and inconvenience to the campus community, but we strongly believe that actions taken now will have the greatest chance of decreasing risk, and that the potential consequences of not acting could far outweigh these short-term disruptions,” Eisgruber wrote. He also encouraged students to consider staying home and not returning to the university after spring break.

MIT administrators announced on Monday that classes of more than 150 students would transition to virtual instruction beginning on Tuesday, March 10.

Berklee College of Music administrators wrote in a Monday email to college affiliates that any individuals traveling to or returning from countries designated as Level 2 or 3 by the Centers for Disease Control and Prevention (CDC) or states where emergencies have been declared — including California, Florida, Kentucky, Maryland, New York, Oregon, Utah, and Washington — will have to complete 14-day self-quarantine prior to returning to the college. However, they wrote that all events and performances were being held as scheduled.

Burke also said that at this time, Harvard University Health Services would not provide testing for COVID-19, with all diagnostic testing to be conducted only through the Massachusetts Department of Public Health and the CDC.

Senior Associate Director of Athletics Nathan T. Fry wrote in an email that Athletics is prohibiting all varsity teams from air travel.

“Following the University’s most recent guidance and guidelines on travel, all air travel for Harvard Athletic contests, including regular-season, spring break and NCAA air travel is prohibited until at least April 30. The overall health and well-being of students, staff and fans are our highest priority at this time,” Fry wrote.

On Monday, the Shorenstein Center at the Kennedy School announced via email the cancellation of the annual celebration of the Goldsmith Awards set to have taken place this week.

The Harvard Art Museums also announced in an email the cancellation of four events occurring during March and early April in accordance with University guidelines.

Several student events on campus were cancelled, including the annual fashion show Eleganza and the annual Spring Into Wellness event hosted by the health peer-education groups on campus.

Students of Economics 10b: “Principles of Economics,” which takes place in Sanders Theater, received an email Monday from the course’s teaching staff that a midterm exam scheduled for Wednesday would be administered electronically instead of in-person.

As of Sunday evening, health officials reported 545 cases of the coronavirus and 22 deaths in the U.S. In Boston, nine cases have been reported, five of which attended a recent meeting hosted by the Kendall Square-based company Biogen, where three employees later tested positive for the virus. As the risk to Boston residents rose over the weekend, a slew of cancellations and postponed events followed on campus.

In a Friday email, Harvard administrators said they “strongly discourage” non-essential meetings or events with 100 or more people and prohibited all University-related international travel and non-essential domestic air-travel.

Three musical groups cancelled a biannual a capella concert slated to take place on Friday in Sanders Theater two hours before the show began, instead livestreaming the event. Sanders Theater announced that it would no longer allow outside renters through April 30.

Memorial Church announced Friday that its weekly Sunday Worship would not take place in person but would instead be available as a broadcast service over WHRB, Harvard’s radio station. The church also cancelled its School, Faith and Life Forum and the William Belden Noble Lectures scheduled to take place over the next week.

According to the producers of the Hasty Pudding show HPT 172: “Mean Ghouls,” Natalie Needle and Samantha Meade, all further New York and Bermuda productions of the show were cancelled.

Women Engineers Code, the largest student-run conference in the country for women engineers, was also cancelled due to the University’s upped guidance.

On Sunday, Institute of Politics Director Mark D. Gearan ’78 announced that all JFK Jr. Forums would be postponed until April 30, but that after spring break, the IOP would explore other ways to present speakers virtually. IOP study groups and student planning will continue with larger spaces to allow for “social distancing,” IOP fellows’ guests to join remotely, and further support if programs do need to move online.

Increased precautions also affected a number of classes over the weekend.

Students of Economics 10b: “Principles of Economics,” which takes place in Sanders Theater, received an email Sunday from the course’s teaching staff that Monday’s lecture would still take place but asked attendees to practice “social distancing.”

“We urge those who come to Sanders Theatre to practice ‘social distancing,’ by leaving space between you and the next student (ideally two seats of empty space). We will open the balconies to increase the ease with which you can spread out in the lecture hall,” they said.

Stat 111: “Introduction to Statistical Inference” professor Joseph K. Blitzstein wrote in an email late Sunday night that the class would shift a Tuesday midterm exam from an in-person test to a timed quiz on the course site.