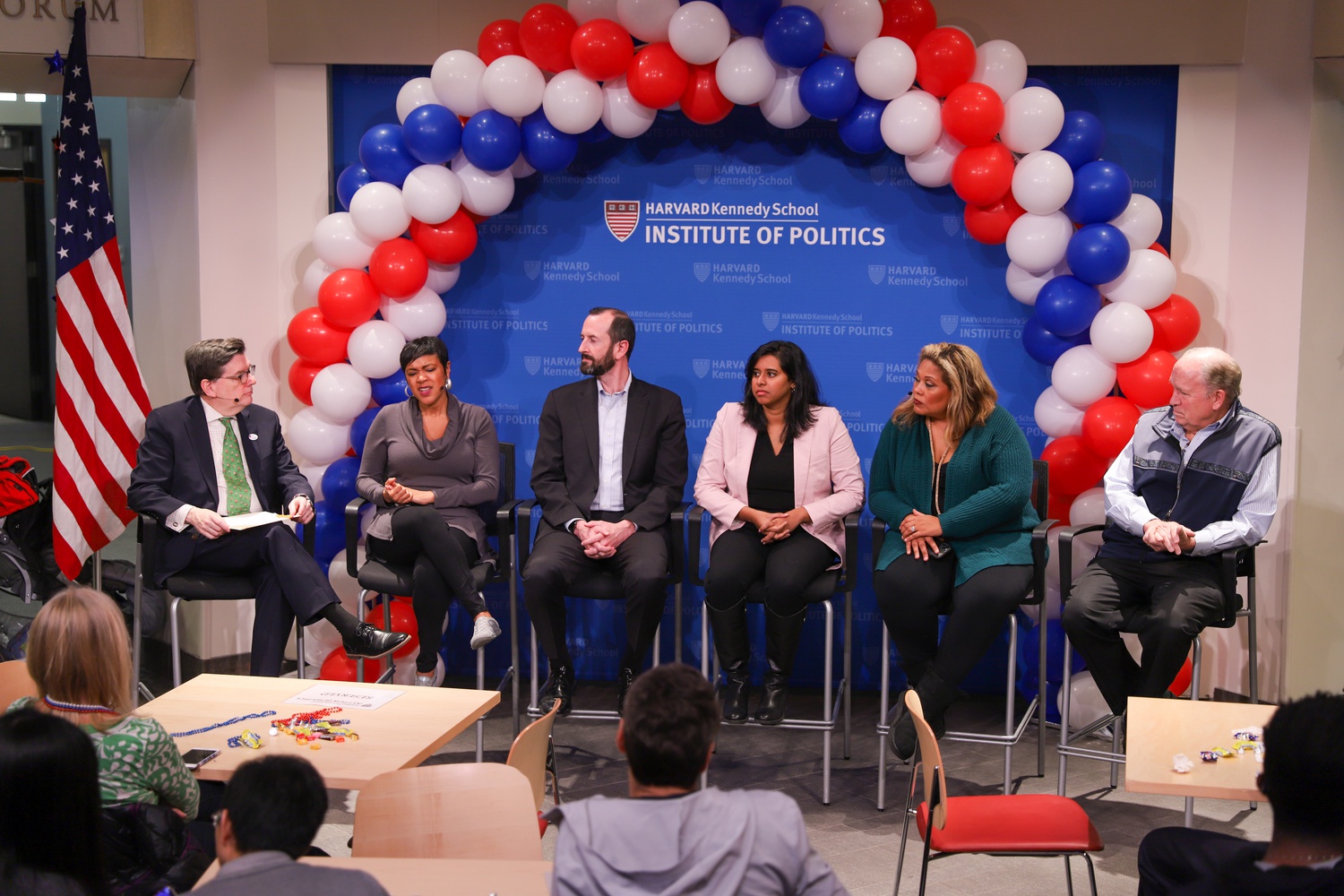 Resident Fellows at the Institute of Politics shared reflections and predictions on the 2020 race during a Super Tuesday watch event. By Ryan N. Gajarawala
By Joshua C. Fang and Jasper G. Goodman, Crimson Staff Writers

Biden’s win came despite the fact that he did not campaign in the state. Sanders finished in second place and — in a blow to her presidential bid — Warren finished third in the state she represents.

“This is almost fully a story of Biden’s momentum over the last couple of days,” Harvard Government Professor Jon C. Rogowski said Tuesday night as results rolled in.

Super Tuesday breathed new life into the Biden campaign more broadly, which appeared feeble less than one week ago. Biden won big in several southern states including Alabama and Arkansas. He also pulled off a victory in Minnesota shortly after receiving an endorsement from U.S. Sen. Amy Klobuchar (D-Minn.).

Tuesday’s results come just days after Klobuchar and former South Bend, Ind., Mayor Peter P. M. Buttigieg ’04 both suspended their campaigns and announced they would back the former vice president.

“I think there’s this sense of wanting to — if the number one task is to defeat Donald Trump — coalesce around a candidate,” Massachusetts Democratic strategist Scott Ferson said.

Noah A. Harris ’22, a student from Mississippi who initially supported U.S. Senator Kamala Harris (D-Calif.), said he voted for Biden because he had the “best combination of alignment” with his personal political stance.

“Who I think could beat Donald Trump, that’s what it came down to,” he said.

“I was not expecting this at all,” he said.

Massachusetts voters delivered Warren, a former Harvard Law School professor who has represented the state in the Senate since 2012, a stinging defeat.

Ferson said he thinks the lackluster finish on home turf will likely be “fatal” for Warren.

Warren held her only Super Tuesday campaign event in Massachusetts Tuesday morning. Hundreds of enthused supporters lined the streets outside her house in Cambridge to greet her as she went to go cast her ballot at the Graham & Parks School.

“I think it’s very hard for her to go to the next state and make the case for being the strongest candidate to beat Donald Trump,” Ferson said.

Ferson added, though, that he does not view the result as a judgement on Warren’s performance as a senator.

“People like her,” he said. “But when you have a multi-candidate choice, you have to pick one. And I don’t think people viewed this in Massachusetts as a referendum on Warren.”

Before Super Tuesday, polls showed Warren and Sanders in a tight deadlock, with Biden polling far below both progressives. Warren supporters at various Cambridge polling locations pointed to her intellect and policy plans as decisive factors.

“I voted for Elizabeth Warren because I think she’d be the best president,” said Caitlin A. Koseck, a 2016 Harvard Law School graduate. “I’ve really liked her since law school.”