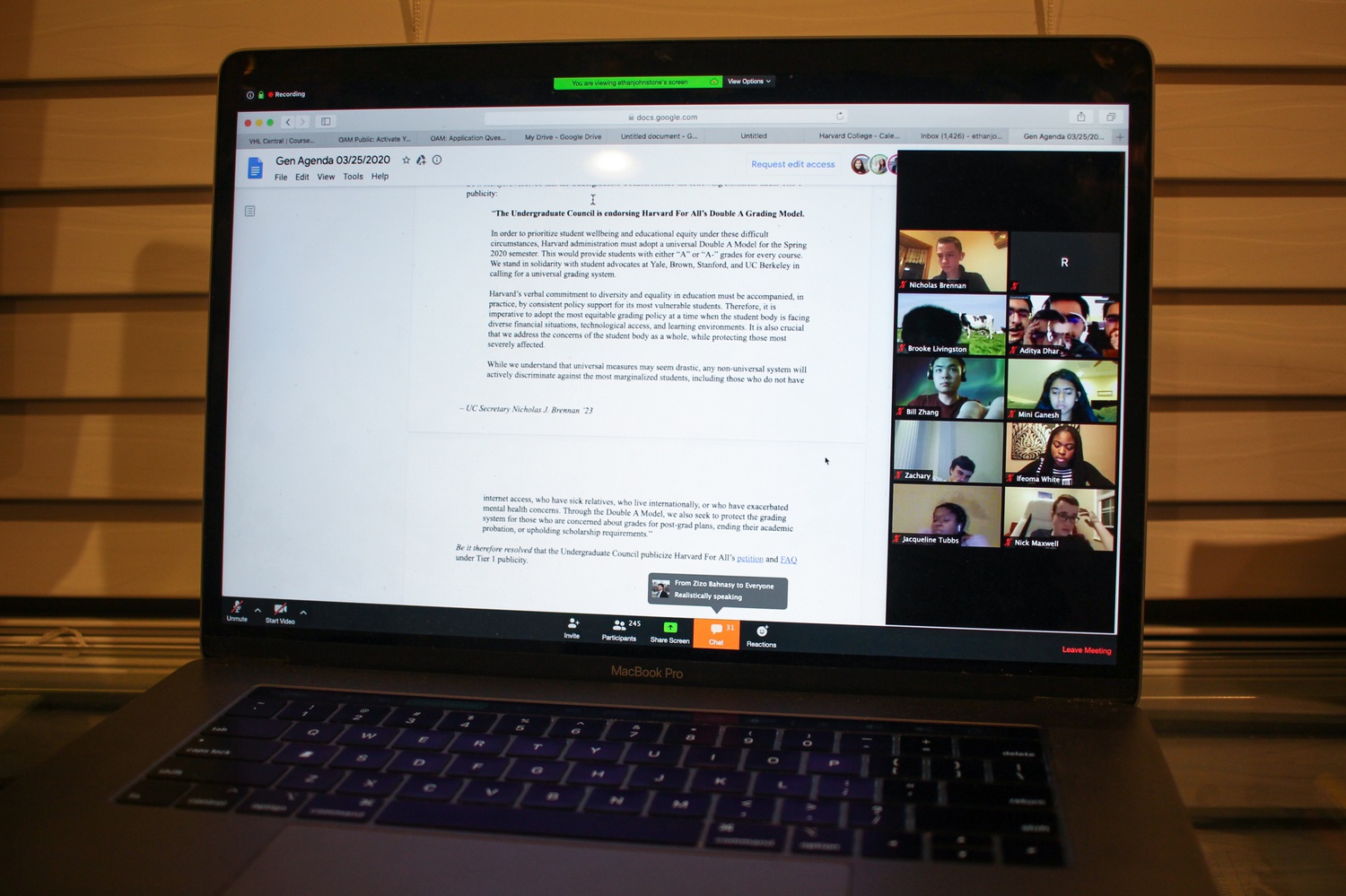 Due to the university's transition to remote learning, the Undergraduate Council hosted a virtual Zoom emergency meeting, open to the public, regarding endorsements of grading policies to the university administration. By Ryan N. Gajarawala
By Sharon Xu, Crimson Staff Writer

Harvard’s Undergraduate Council tentatively voted to endorse a universal pass grading model in response to changes prompted by the COVID-19 crisis, after reversing its position on a “Double A” grading model at a rollicking emergency session over Zoom Wednesday night.

A number of demands for different grading systems have sprung up as a result of the on-campus impacts of the coronavirus epidemic. Harvard’s Committee on Undergraduate Education, whose members include administrators as well as students, has yet to formally decide whether the College should adopt a different grading model for the semester as students raise concerns about the challenges of studying away from Cambridge.

Some Council members made their stance on grading clear prior to Wednesday’s meeting.

According to Mathew and White-Thorpe, the survey, which garnered 3,116 respondents, showed that 56.7 percent of respondents selected the “Double A” grading model as their first choice, followed by 24.5 percent who picked an opt-in pass-fail choice, and 19.3 percent who voted for a universal pass-fail system.

Under the “Double A” grading model, students would be awarded an A or an A- in their courses this semester. Under opt-in pass-fail, students may choose to change the grading status of any course. Finally, under universal pass-fail, all courses will be graded on a pass-fail basis this semester.

The legislation proposed that the Council publicize a petition calling for the adoption of the “Double A” grading model.

Before the Council voted on whether to endorse the model, students shared their opinions to the representatives. Students voiced their questions, comments, and concerns about the “Double A” grading model, using the ‘raise hands’ feature on Zoom or interjecting freely.

Throughout the meeting, attendees utilized Zoom’s chat function to send thousands of messages to one another — some regarding grading perspectives and others less directed toward the topic at hand.

Undergraduate pranksters also screamed, made flatulent noises, and played music during the meeting. Some participants used pseudonyms such as “Larry Bacow,” “Pitbull,” and “Tom Brady Jr.”

After the Council voted to suspend rules and allow members from the student body to voice their opinions, several undergraduates spoke in favor of and in opposition to the “Double A” grading model.

“I think that people, when they came to the school, that they kind of entered into a contract with Harvard that you do the work and they would give you honest feedback in terms of how that work was,” Donhauser said. “For them to do an either universal ‘A’ or a universal pass would kind of break that contract.”

Sanika S. Mahajan ’21, an organizer of the “Double A” advocacy group Harvard for All, spoke in favor of the policy at the meeting.

“The number one goal here is to equalize the playing field by adopting a universal policy,” Mahajan said.

After an initial vote, the “Double A” legislation passed by a vote of 69.7 percent, just over the two-thirds required.

However, as the meeting continued, further discussion on grading models for the College in light of the COVID-19 outbreak led some representatives to reconsider.

Under the Council bylaws, representatives can change their vote on legislation up to a week after the meeting. At Wednesday’s meeting, that policy proved pivotal as several representatives changed their votes to endorse the “Double A” grading policy and voted against it instead.

Lowell House representative Rachel L. Reynolds ’22 wrote in the Zoom chat that she was changing her vote.

“hi for transparency sake I just changed my vote on double A from aye to nay!” Reynolds, who is a Crimson blog editor, wrote.

As the meeting neared its three-hour mark, Brennan announced that the legislation for endorsing the “Double A” grading model had failed due to representatives’ shifting decisions.

Aside from the “Double A” grading model originally passed, the Council also discussed a second policy — a grading model similar to the one recently adopted by Southern Virginia University.

The proposed version of the SVU grading model would have mandated that Harvard students not receive a grade lower than the grade they had on March 17. The legislation, which did not pass, additionally stated that, in cases where students had not received any grades thus far in the course, they would receive an A.

Adams House representative Alexa C. Jordan ’22 proposed an act for the Council to endorse a universal pass system. The legislation stated that the system would decrease the competitiveness that would remain in a “Double A system” and account for inconsistencies in grading by different professors.

The legislation, which the Council passed, also called for Harvard to “adopt a Universal Pass system that preferably treats a Pass as a ‘4.0’ for GPA purposes.”

The Council also voted in favor of legislation suggested by Quincy House representative Ryan V. Sears ’22, who proposed an act for the Council to compile different options for grading models and present them to administrators alongside student testimony.

Finally, Ivy Yard representative Pallas Chou ’23 introduced legislation for the Council to endorse a grading model where courses would automatically be graded as pass, but students have the option to change it to a letter grade upon seeing their grades at the end of the semester. Under this model, no students can receive a failing grade because the course is removed from their transcript. Representatives did not vote on whether to endorse the legislation because it did not receive the two-thirds vote necessary for it to be considered.

A previous version of this article incorrectly stated that, under legislation proposed by Pallas Chou ’23, courses would be graded on a pass-fail basis. In fact, students would pass by default under the legislation.

—Staff writer Sharon Xu can be reached at sharon.xu@thecrimson.com.