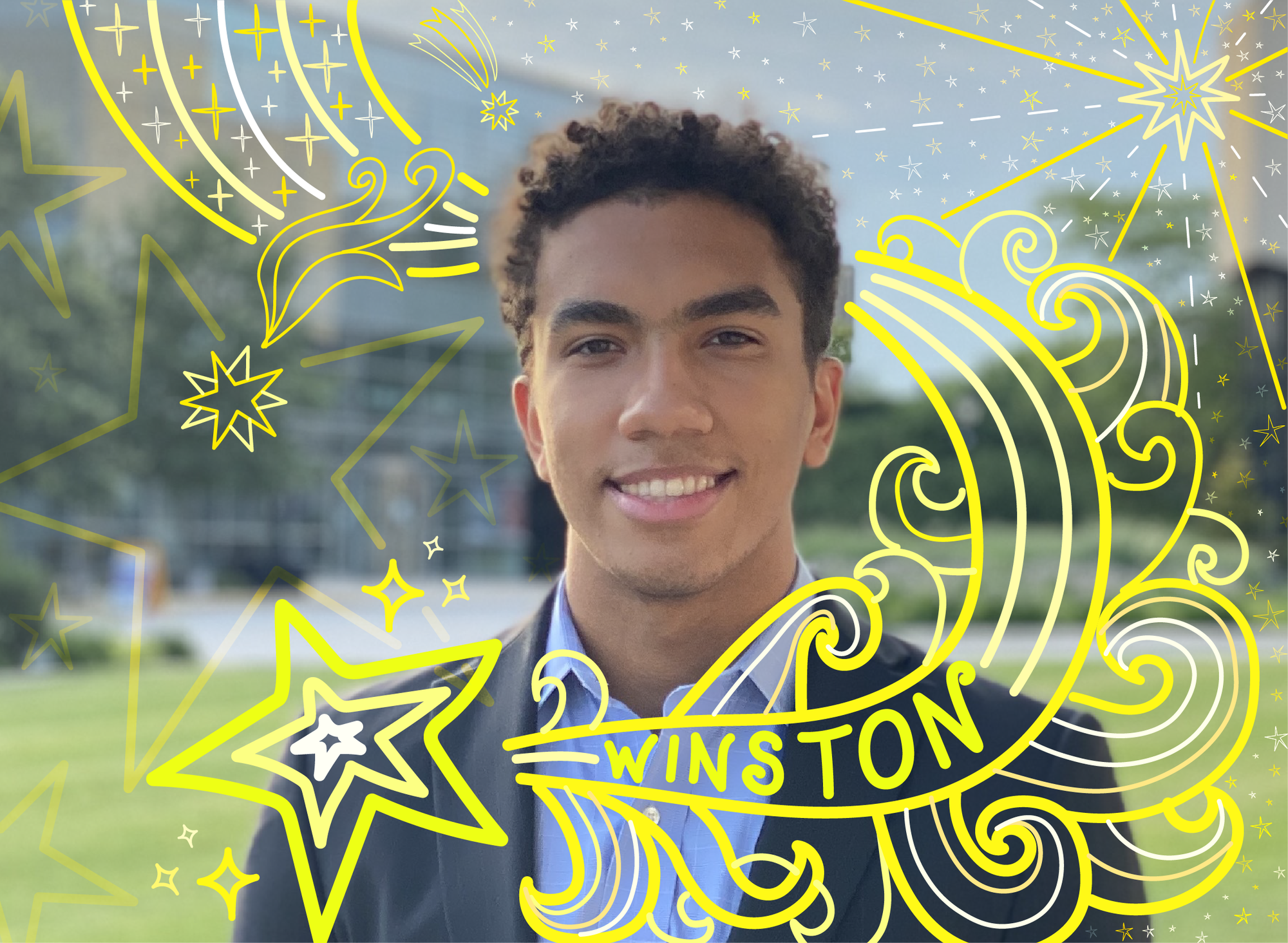 P. Winston Michalak ’21 never dreamed he’d spend what was supposed to be his senior year within the walls of his childhood home in Evanston, Ill. But throughout our conversation, he repeatedly insists on how lucky he feels.

Admittedly, he misses spending time with his friends, competing with the club swim team, and seeing the Pfoho dining staff at meals. But he’s quick to give props to his family’s cooking, too, joking that “our ‘dining hall’ — our kitchen — is also great.” The Michalaks have a full house for the holidays, with Winston, his parents, his older sister, and his younger brother.

“I grew up hanging out with my siblings,” Michalak says, “so it’s been easy to not feel so isolated.” He feels fortunate to have his sister and brother home right now, because socializing outside of his household is difficult to do safely, and most of his friends live outside of Evanston anyway. When I ask what he and his family do for fun, Michalak mentions cooking, talking, and watching horror movies.

“Or working together,” he adds on, proceeding to describe how his family members gather to work on separate tasks in the same area, just to enjoy one another’s company. I chuckle when I hear that, thinking of my own family’s antics, and ask him if working from home hasn’t been at all distracting. He laughs and admits,“I definitely felt like productivity took a hit at the beginning. But I think we’ve adjusted to this remote life, so now we’re back at working more effectively.”

Michalak has had plenty of work to do, despite taking time off from school this semester. He currently has a job at Intel, doing data analysis for a team that tests semiconductors to make sure they’re working properly. I’ve already told Michalak I’m an English concentrator, so he graciously explains what a semiconductor is for me — essentially, I learn, it’s a necessary component of “computers, smartphones, and lots of computing technologies.”

Michalak says his decision to take the job rather than enroll this semester might have been different in a world without COVID-19. However, as things are, he feels lucky for the opportunity to do work he enjoys while earning money to alleviate financial pressures at home. He’s also grateful for the extra time to think about his electrical engineering thesis, which he laughingly says is “still very much up in the air.”

Michalak is a research assistant at the Kennedy School’s Project on Europe and the Transatlantic Relationship. On campus, this role meant organizing and running events, but now he helps out virtually by supporting research efforts for team members writing articles or attending talks. When I ask him what time management is like with so many commitments, he says, “Nothing that I’m doing ever feels like a burden. All the work that I’m doing is really interesting and so it never lags.”

Michalak says that one of the things he’s appreciated about remote life has been his ability to attend virtual events while he’s working on something else. “I can be two places at once, which has been really exciting,” he says. Another benefit of isolation at home has been increased intentionality when it comes to staying connected with his college friends. Now that Zoom is the “new normal,” he says, he makes an effort to keep in touch with classmates overseas and all around the United States.

Michalak isn’t sure whether he’ll return to campus next semester, though he longs to see his friends again — it’s undeniable there is no virtual replacement for physical proximity to the people you love. Still, he ends our conversation by reasserting how grateful he is for what this shocking year has held for him. “Many millions of Americans have COVID, and many hundreds of thousands of them have died of COVID,” he says, reminding us both of the world’s strange and terrifying present state. “That is something that my family has not had to deal with, so I consider myself very fortunate.”

— Staff writer Roey L. Leonardi can be reached at roey.leonardi@thecrimson.com.