A ‘Double-Edged Sword’: For Harvard Students, Social Media Both Connects and Alienates 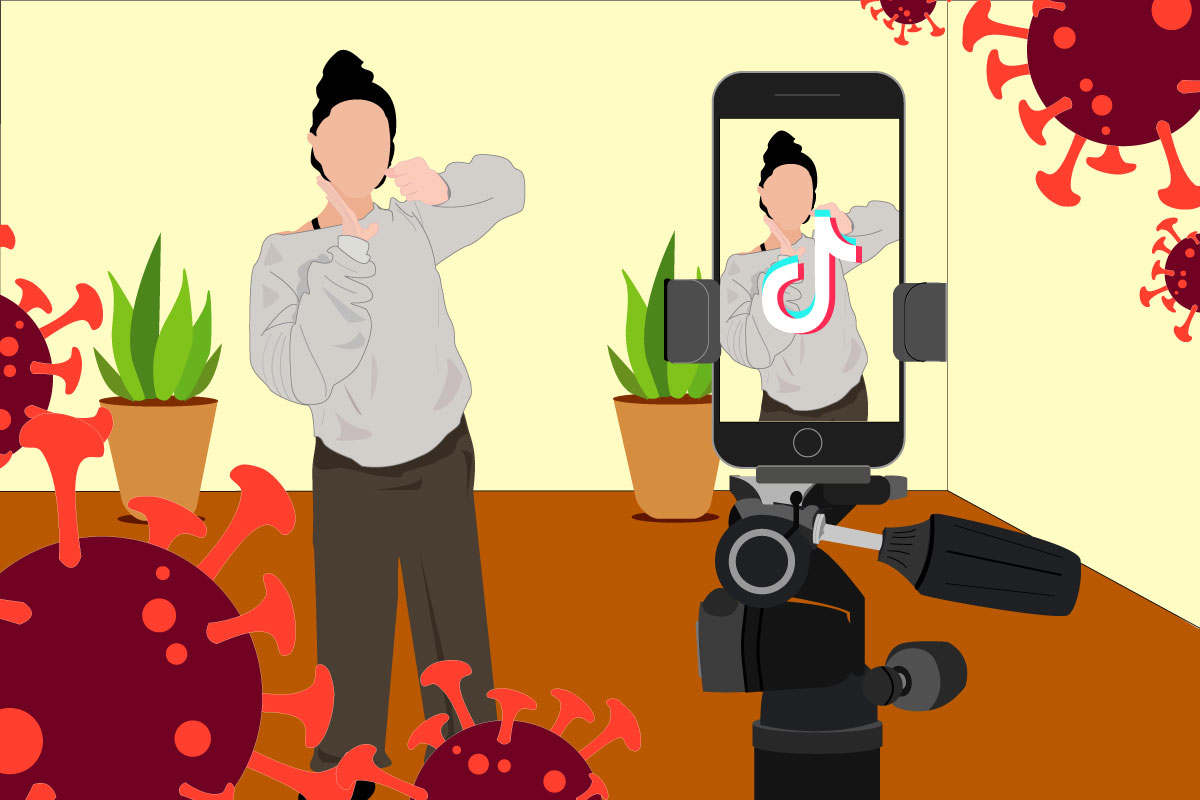 TikTok, a platform for sharing “personalized short videos” — as described by its website — has thrived during the COVID-19 pandemic. By Justin Y. Ye
By Isabella E. Peña and Lauren L. Zhang, Contributing Writers

With the world in the throes of a pandemic and a lockdown altering everyday methods of communication, students find themselves increasingly hooked on social media and grappling with the effects of hyperconnectivity.

The result is a boon for social media platforms. TikTok, a platform for sharing “personalized short videos” — as described by its website — has thrived during the COVID-19 pandemic. The app experienced a 27 percent increase in growth during the first 23 days of March compared to February. More than 25 U.S. states and territories had closed schools by mid-March.

Data for the daily use of six social media platforms — Facebook, Twitter, Snapchat, Instagram TikTok, and YouTube — from The Crimson’s Class of 2024 freshman survey showed TikTok had the fewest number of users: 412 out of 840 respondents had an account. However, out of those who did have an account on a given platform, TikTok boasted the highest proportion— 43 percent — who reported spending on average more than one hour each day on it, followed by YouTube with 37 percent; and Instagram, with 27.4 percent.

Social media creators and users at Harvard said their social media consumption patterns have drastically increased under pandemic lockdown restrictions and impacted their well-being in a variety of ways.

In Apple’s list of most-downloaded apps for 2020, TikTok sits in second place, overshadowed only by Zoom.

Aurelia E. Balkanski ’23 said she found herself spending more time on TikTok once lockdown began, whereas she spent less time on Instagram, a change she said was motivated by the different content on the two platforms. Part of TikTok’s draw, she said, came from the videos all being less than one minute long, providing her with what she described as “quick, little, funny entertainment."

“I guess Instagram has their explore page, but it’s half ads and such — but with TikTok, it’s like watching TV, but there’s never a boring part of your show, you know,” Balkanski said. “The continuous access to videos makes it appealing. You never see the same thing twice – you’ll always be exposed to new people and new things and new stimuli.”

And the sheer breadth of content on TikTok ensures that users can find videos of interest no matter what they’re searching for. TikTok’s algorithm also creates a specially-curated, never-ending feed for users — and makes it possible for any video to go viral.

Yasmine Omri ’24 said she spends her time on niche genres of TikTok content that offer advice. She is not an active user of the platform, rather choosing to watch entertaining or “valuable” videos that were shared to other platforms in the form of YouTube compilations or Instagram posts.

“I’ve seen some TikToks of college YouTubers just explaining financial applications in really short TikToks, and some were explaining the Common App, and I was like, ‘Oh, that's super cool’,” Omri said.

Claira Janover ’20 made an account in April for her personal use. On June 5, her account suddenly took off after she posted a video supporting the Black Lives Matter movement, leading to "a little bit of a national scandal." As of Dec. 2, she had more than 460,000 followers on the platform.

“When COVID first broke out, I didn’t really think about TikTok at all — I made fun of people on it. And when more and more people started to do it, and send videos, was when I finally indulged,” Janover said. “It was something that I used mainly for fun — just had a blast with it.”

After being thrust into the limelight, she was forced to consider “social media behavior and psychology of engagement,” she said.

Similar to Balkanski, Janover noted that users are drawn to TikTok due to its algorithm and entertainment value.

“TikTok is randomized in a way that Instagram is not,” Janover said. “Growth on it is just so anyone can build, right? Just have a viral video. Versus Instagram, for example, where there’s no such thing as a viral post.”

The unpredictable nature of the TikTok feed has contributed to its success as an entertainment platform — in just four years, the platform has grown to reach an estimated value of $50 billion — and at the center is its prized algorithm, which keeps the user hooked on a never-ending stream of videos.

Any user’s feed can contain content from a wide variety of creators — regardless of whether or not the user follows those creators — that does not necessarily have to be recent. Unlike many other platforms, TikTok does not show when a video was posted, and the algorithm draws on content from further back.

Some students said they are convinced that TikTok has “gotten a little out of hand in how much cultural stake it has in our generation," said Karina L. Cowperthwaite ’23.

“Everyone’s on TikTok, everyone’s doing TikTok trends, everyone’s getting their news on TikTok,” she said. “I don’t know if I would cite TikTok as a reputable news source — but I do know people who do.”

For Tommaso Serafin ’24, joining TikTok and subsequently spending more time on social media was off the table.

“It seems that it would be a no-brainer to say that social media was helpful during a time in which people are locked in and everything, but I just feel it’s not that straightforward,” he said.

Despite TikTok’s ever-growing popularity, Serafin cited concerns about the addictive nature of TikTok’s notorious algorithm — adding that TikTok was “much worse” in terms of getting users addicted than its competitors — on top of data privacy issues. The app has garnered concern from some Americans about its data collection practices. President Donald J. Trump released an executive order in August that designated TikTok a national security concern because of its parent company's connections to China, setting in motion a ban that never came to fruition.

Beyond these concerns, some students have reported that social media is a depressing influence on their lives.

Serafin is an international first-year student living off-campus, which he believes exacerbated the “demoralizing” effect of seeing posts of people going out and possibly shirking COVID-19 restrictions.

“Once you contextualize stuff, it’s better. But in the moment, seeing that, it’s not really nice,” he said. “And that’s why I tried to cut back and not look at it.”

Some students, like Cowperthwaite, said that the “double-edged sword” of hyperconnectivity exacted by quarantine and lockdown measures has amplified the effect of social media on their self-image.

“You see people starting these cool projects over quarantine, or doing these remote internships, and I think there’s definitely a higher level of anxiety — at least for me personally — that ‘Oh my gosh, I’m not doing enough because I’m not physically out there doing anything’,” she said.

She added that young people are not just being subjected to greater pressure in this form from their peers during isolation, but that this was all still in the context of the “constant conversation” revolving around the presentation of beauty and lifestyle standards on social media.

“You’re more vulnerable to that persuasion when you’re sort of sitting at home on your phone,” Cowperthwaite said. “I personally find that detrimental to my mental health, because quarantine can be a dark hole where you feel very isolated and in your own head.”

Social media can create difficulty for people on both sides of the screen. John A. Fish ’21, who has been making YouTube videos for the past six years, attested to the strains creators feel.

“Quarantine’s been really difficult for a lot of people. And I’ve been really lucky that it hasn’t been horrible for me as it has been [for others]. But it’s been a hard time. And it’s kind of hard to make videos when, like, you’re not doing great,” Fish said.

He added, “The content that I make kind of relies on me, like, being curious and exploring ideas and, like, exercising that part of my brain for a while, at the start of the pandemic, I wasn’t doing that really. And I broke out of that a little bit. It’s gotten better, but it’s definitely affected [me].”

The creative block has come with its upsides. Fish said that because he puts out content less frequently, he is able to spend more time reflecting on his own life.

“I think it allowed me to be a little bit more introspective with what I want to be doing with my life, my career and who I want to be involving in that," he said.

While some students said they needed a break from these apps, others found social media to be an integral part of their communication with friends amid pandemic lockdown measures.

Fish said that because he lives in Canada, but his college friends live in the U.S., being on social media is a must “in order to get any semblance of a social life.”

Still, Fish said he tries to find the right balance for his social media use, ensuring that it is intentional and that he’s “actually connecting with my friends and family and not just scrolling infinitely through, you know, Trump’s Twitter or whatever.”

Time Magazine reported in May that 75 percent of Generation Z survey respondents said they “always or often” or “sometimes” felt more lonely because of the pandemic.

Some Harvard students said they used social media to fill this void.

Balkanski found that spending time on social media helped her fill the gaps left by face-to-face social interactions, saying that it “brings [her] joy to see those other people are having fun as long as they’re distancing”.

Akhila S. Yalvigi ’23 agreed and said that she appreciated “the feeling of being connected with people, even if it’s just in a superficial way”.

“Just knowing that people are on the other side of the screen was helpful for me, and I personally never really had any huge problems with the negative impacts of social media,” Yalvigi said. “Mostly, I tend to follow people that I know and follow my friends and everything, not necessarily buying into like influencer culture and engaging with that a lot.”

Cowperthwaite emphasized that for her, there was a distinction between using “social media” and “staying connected digitally."

“Calling your friends or doing Netflix Party or playing Among Us, or doing some kind of online activity, that has been really beneficial in terms of connecting with people online,” she said. “But in terms of social media, I did find myself deleting Instagram.”