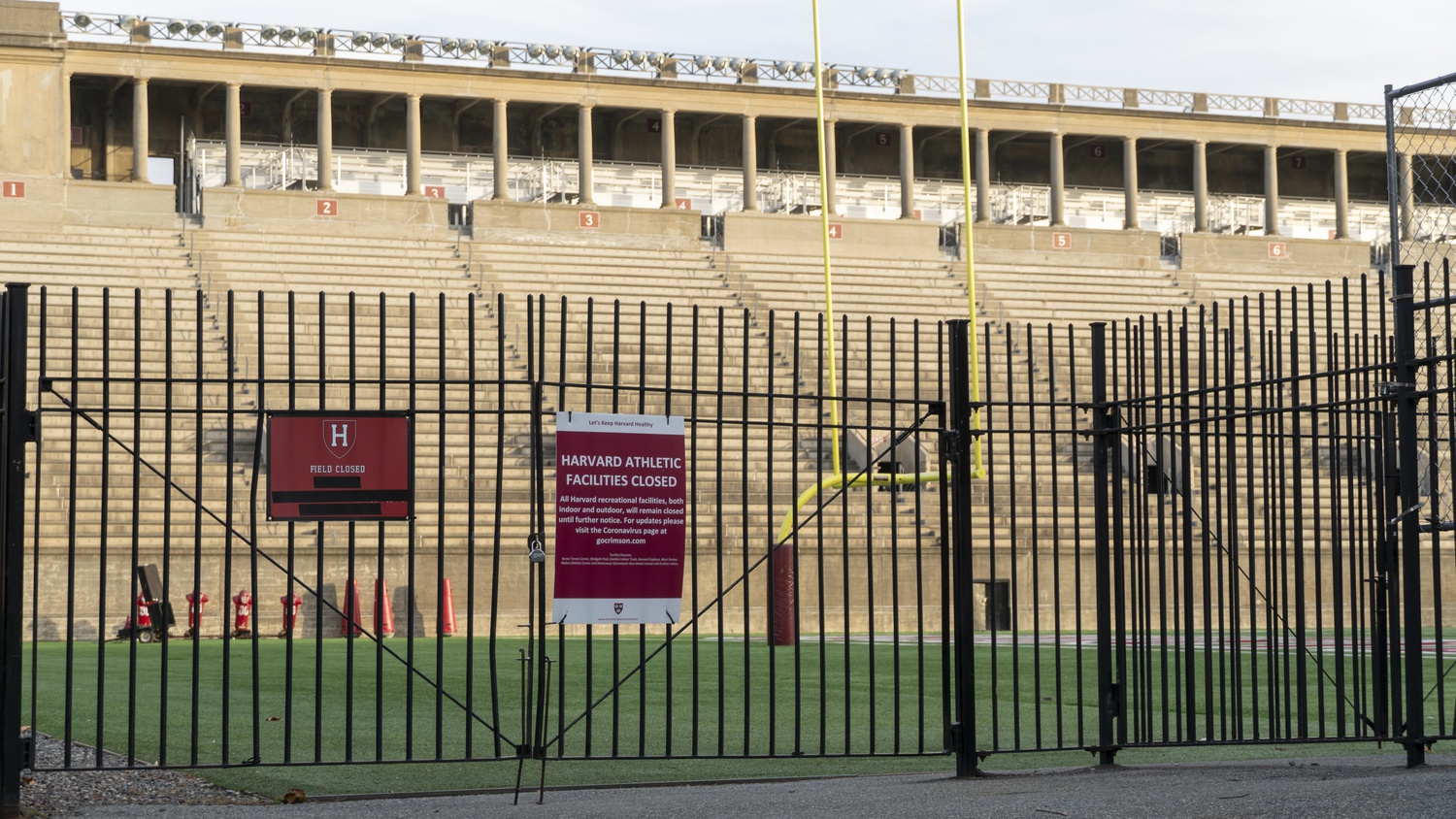 Signs posted outside Harvard Stadium announce that all recreational facilities are closed due to the COVID-19 pandemic. By Zadoc I. N. Gee
By Ema R. Schumer, Crimson Staff Writer

Harvard and the seven other Ivy League institutions have canceled the winter sports season as the number of coronavirus cases climbs in Massachusetts and across the nation, according to Director of Harvard Athletics Erin McDermott.

McDermott informed Harvard student athletes in a webinar Thursday evening that the Ivy League presidents unanimously decided not to proceed with the season. She also relayed to athletes that the spring sports season will be delayed at least until the end of February and that the fall sports season — which the Ivy League canceled this summer due to COVID-19 — will not be rescheduled for the spring.

“The presidents know this decision is very disappointing and share that disappointment, but the health and safety of student athletes, coaches, and the greater community has to be the highest priority,” McDermott told athletes on the call. “Intercollegiate athletics is part of a wider campus community and must operate within the same campus policies and framework.”

The Ivy League’s decision confirms that varsity athletics will not continue at Harvard in 2020.

The Ivy League canceled the 2020 spring sports season in March, two days after Harvard announced that students would have to evacuate campus as a result of the growing COVID-19 crisis.

The League announced in July that it would discontinue athletics competitions and practices for the fall term in lockstep with safety measures enforced by member universities to curb the spread of the coronavirus on their campuses.

Harvard invited a select number of students to live in the dorms this semester and implemented stringent residential health guidelines, including mandatory social distancing. Athletes living on campus began limited, sport-specific training in October under a mask mandate and social distancing requirements.

McDermott said during the webinar that campus safety policies for the spring semester, including limits on group gatherings and social-distancing guidelines, will inform what types of athletics activities can take place on campus.

Though fall and winter sport athletes will not be able to compete during this academic year, McDermott assured those athletes that they can preserve a year of collegiate athletics eligibility. Harvard ruled in April that varsity athletes whose seasons were cut short due to COVID-19 could compete for another season, though they would have to transfer to another university to use their eligibility.

McDermott, who told athletes that she shared their disappointment, said their sacrifice was for “the greater good.”

“We need to find perspective and be mindful of the depths of loss many have suffered in this pandemic,” she said. “Know that we are here for you and we will do our best to support all of you as you make important decisions and get through this difficult time.”

The Ivy League university presidents wrote in a joint statement Thursday that protecting the health of their student athletes and campuses more broadly guided the decision to cancel the winter athletics season. They also cited nationwide upticks in the spread of COVID-19.

“While these decisions come with great disappointment and frustration, our commitment to the safety and lasting health of our student-athletes and wider communities must remain our highest priority,” they wrote. “We look forward to the day when intercollegiate athletics — which are such an important part of the fabric of our campus communities — will safely return in a manner and format we all know and appreciate.”