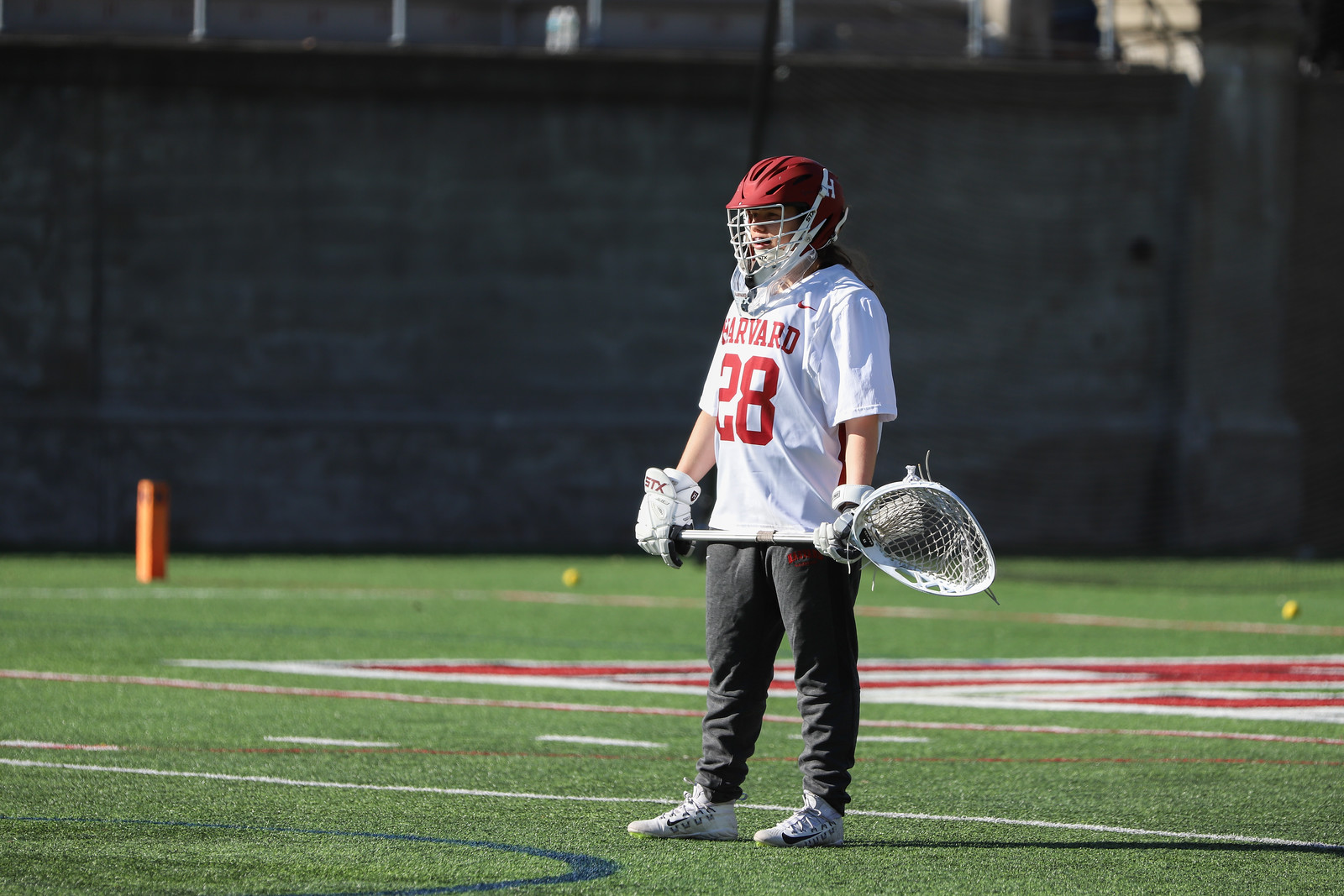 Last weekend's loss versus Penn marked the end of the 2019 season for Harvard, but much of the squad, like sophomore goalie Grace Rotondo, will be returning next year. By Quinn G. Perini
By Ben Stern, Crimson Staff Writer

Harvard capped off a tough season on Saturday with a tough loss to Penn on Senior Day in front of nearly 600 fans.

Freshman midfielder Hulslander finished with three goals on the day, and attacker and captain Keeley MacAfee poured in four more in the last game of her illustrious career in Cambridge.

The loss completed a 2019 campaign marked by both inconsistency and promise.

In its ninth game, the squad dealt an 18-8 drubbing to rival Yale. It was a display of dominance that seemed to spell good fortunes for the rest of the year.

Then the team slipped heading into the heart of Ivy play, ending with a less-than-stellar overall record. However, there were a number of bright spots for the Crimson, including young talent: Hulslander shined in her freshman year with 29 goals, and sophomore attacker Madison Conklin racked up 15 goals and nine assists.

From a team standpoint, there were a number of encouraging close calls. The Crimson played No. 11 Denver tightly in the first half and lost a hard-fought game to No. 15 Princeton, 14-12.

Within the Ancient Eight, things easily could have gone differently. In addition to the Princeton game, Harvard lost to Dartmouth 15-11, fell to Columbia 15-14, and, in its last away game, dropped a showdown with Brown, 10-9.

Rookie head coach Devon Wills now officially has one season with the Crimson under her belt.

“I am really proud of the team and the improvements that they made throughout the season,” she said. “We played a very difficult schedule playing several top 10-top 15 opponents. The Ivy League is extremely competitive. Our team continued to improve throughout the season and I am so proud of how the team competed and came together as a group. Obviously the Yale game was a highlight and all 28 players contributed to that win!”

Wills identified an inability to sustain performance as her team’s biggest weakness.

“Moving forward I want us to compete consistently so that we are able to put together a full 60 minutes,” she said.

She’ll have a committed group ready to take on that challenge next spring. But there are three players Wills won’t be able to rely on in 2020: her trio of senior captains, who said farewell to the program on Saturday after starting each of the team’s 15 games this year. MacAfee, attacker Nicole Baiocco, and defender Marley Jenkins all played very well in their last run with the Crimson.

“This season definitely was not easy,” MacAfee said, “but it was probably my favorite year of playing Harvard lacrosse. A lot of games did not go our way, but our coaches took pride in making our team a family and they never gave up on us no matter the circumstances. They made this year very special for me and I’m really thankful I got even one year to play for them.”

She highlighted the Yale game as a high point of the season.

“It was a great team win,” she said. “Of course, Harvard-Yale is always a big game. It was awesome to beat them decisively at home.”

“The highlight for me was crushing Yale at home on a beautiful day,” she said. “A ton of different people scored and everyone played together and of course it’s always awesome to beat our rival Yale.”

The captains also praised their team’s ability to stick together and expressed hope for the future.

“Our biggest strength was our team culture,” said Jenkins. “We are all best friends and really care for each other’s successes, which always helps us get through hard times.”

“Regardless of the outcomes in games, we came ready to move on and get better the next day at practice,” echoed MacAfee.

“Overall it was a great season with an awesome group of girls and coaches,” said Jenkins. “I can’t wait to see where Harvard women’s lacrosse goes in the future.”

While it will certainly miss its graduating seniors, the Crimson is poised to bounce back in 2020 with a skilled coach, a new batch of recruits, and a cohesive returning cast.

— Staff writer Ben Stern can be reached at ben.stern@thecrimson.com.