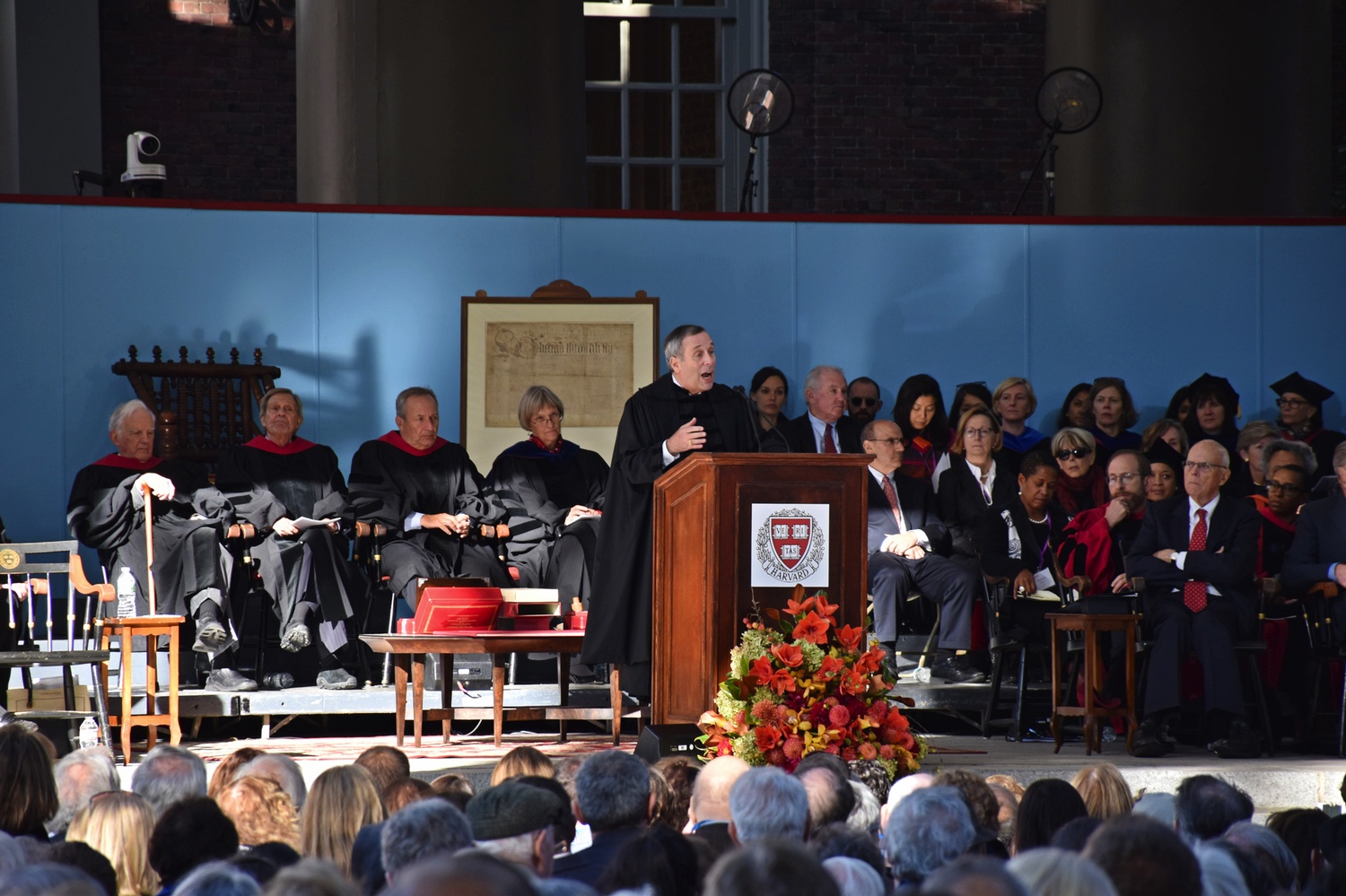 Harvard President Lawrence S. Bacow, pictured here at his inauguration in 2018, said in an interview Friday that the University will not remove the Sackler name from campus buildings. By Awnit Singh Marta
By Alexandra A. Chaidez and Aidan F. Ryan, Crimson Staff Writers

University President Lawrence S. Bacow said it would be “inappropriate” for Harvard to remove the Sackler family name from campus buildings and return any past donations from the family in an interview Friday.

In June 2018, Massachusetts Attorney General Maura T. Healey ’92 submitted a court filing as part of a lawsuit against Purdue Pharma — a pharmaceutical company owned by the Sackler family that produces the painkiller OxyContin — alleging that members of the Sackler family who have served on the company’s board of directors oversaw marketing techniques that have been linked to the opioid epidemic.

Arthur M. Sackler donated significant funds to Harvard to name the school’s museum collection of Asian, Middle Eastern, and Mediterranean art after him. Sackler passed away roughly a decade before OxyContin came to market and his stake in the company was sold to his brothers. Many activists, however, blame him for the aggressive advertising tactics he helped pioneer, which they say Purdue sales representatives later used to push the drug.

In recent months, dozens of mothers whose children died from opioid overdoses wrote letters to Bacow urging him to cut ties with the Sacklers and refuse future funding from them.

In response to the letter, Bacow wrote in March he was “deeply moved” by the mothers’ stories and photographs, but the University did not have plans to remove Sackler’s name. In addition to “legal and contractual considerations,” Bacow also noted that Arthur Sackler had passed away before OxyContin was developed and marketed.

On Friday, Bacow reiterated his previous statement that the Sacklers gave their donation before the development of the drug.

“I've said, on the record, in the case of the Sackler family, the gift that we received from Dr. Sackler was a gift that was made before Oxycontin had ever been developed” he said.

Bacow also maintained that the University will not return the gift.

“Dr. Arthur Sackler died before the drug was developed. His family sold their interest in the company before the drug was developed,” Bacow said. “And I think it would be inappropriate for the university to either return the gift or take Dr. Sackler's name off the building that his gift supported given that he had absolutely no relationship to it.”

Activists have long called on Harvard to remove the Sackler name from University buildings, but renewed their efforts after Healey filed a memo in the case in January 2019. Activists then circulated a petition addressed to Bacow entitled “Tell Harvard: Cut Ties With Makers of OxyContin.” The petition has garnered 14,746 signatures as of Sunday afternoon.

More than 1,600 lawsuits have now been filed in state and federal court against Purdue, which is considering filing for bankruptcy. The lawsuits have uncovered the company’s tactics used to promote the painkiller even after its executives were aware of the drug’s potential for abuse.

In late March, Purdue and members of the Sackler family agreed to pay $270 million to settle an Oklahoma lawsuit. Other suits — including one in Massachusetts — may still be fought out in court.