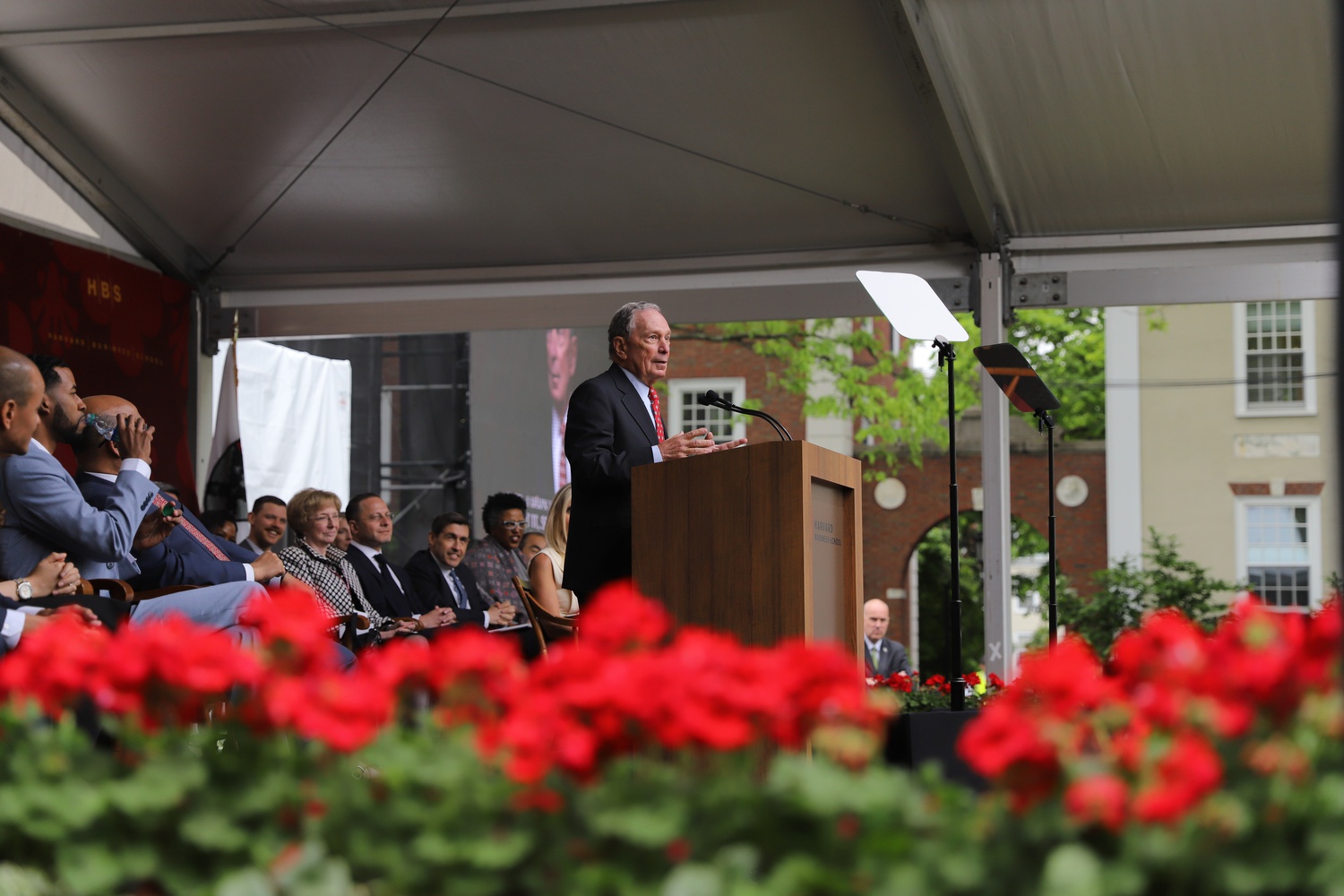 A 1966 Business School MBA graduate, Bloomberg is the founder of Bloomberg L.P. — a financial, software, data, and media company — and his charity, Bloomberg Philanthropies. The latter has partnered with Harvard to fund the Bloomberg Harvard City Leadership Initiative, among other ventures. Bloomberg served as New York City’s mayor from 2002 to 2013.

“Graduates, restoring the faith that Americans have been losing in our economic and political system is a big job,” Bloomberg said Wednesday. “If you won't lead it, who will?”

Bloomberg also announced that his foundation will host a conference on climate change investing in conjunction with the Business School in 2020.

“Market forces are among the most powerful tools in the world,” Bloomberg said. “But whether it's climate change, or income inequality, or gun violence, or any other issue, those forces must be guided by ethical leaders, or else the market's invisible hand can turn into a clenched fist.”

Without mentioning him by name, Bloomberg also took several opportunities to attack Trump and urged graduates to value ethics over political party. Bloomberg — who was once rumored to be weighing a 2020 presidential campaign — announced in March that he would not seek the office.

"No party has a monopoly on good ideas or good people. But I believe all of us have an obligation to reject those who traffic in dishonesty and deceit,” Bloomberg said. “That is not a partisan position, that's a patriotic position.” 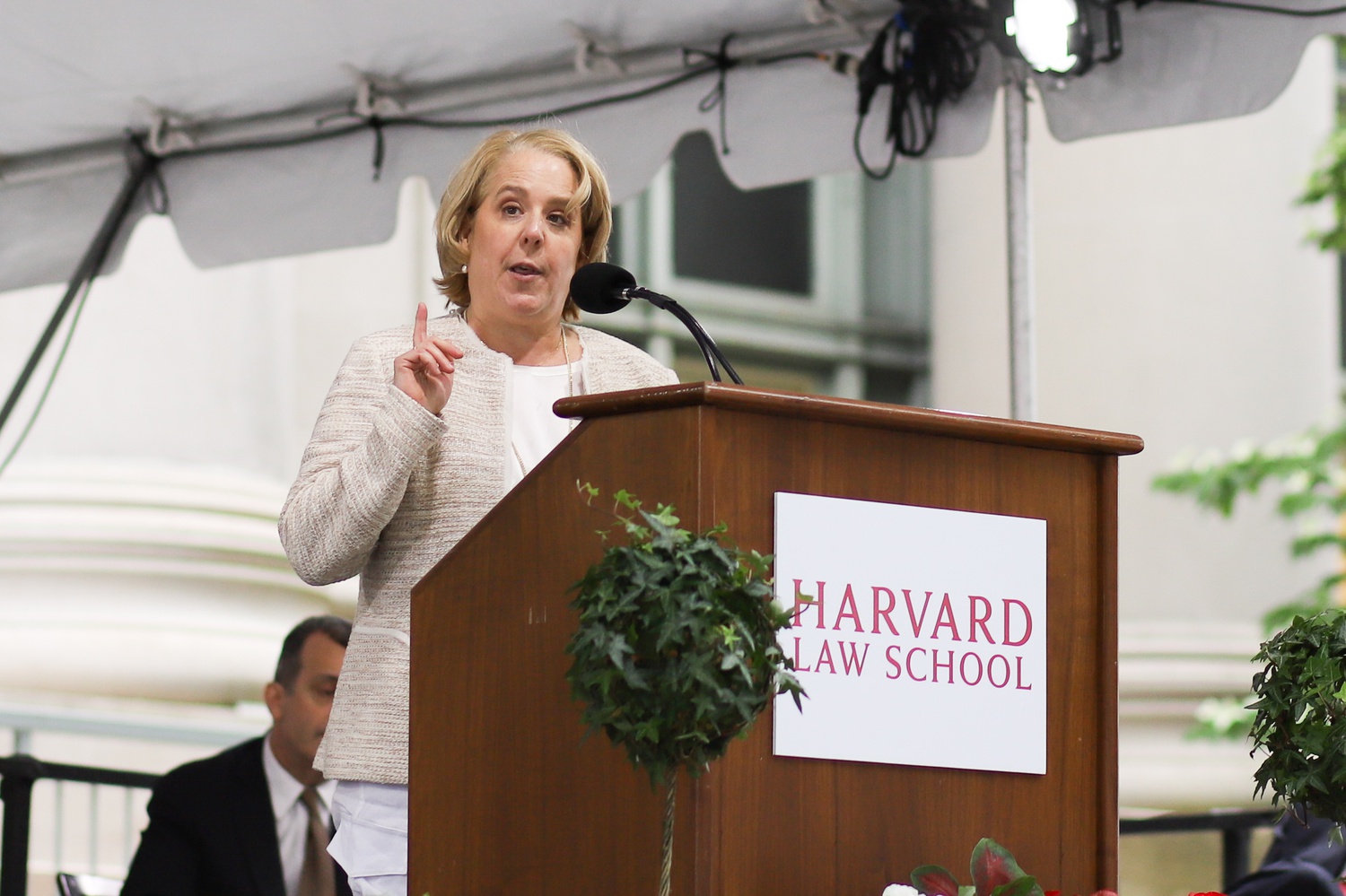 American lawyer Roberta A. Kaplan '88 spoke at Harvard Law School's Class Day event Wednesday. Kaplan led the push to convince the Supreme Court that the Defense of Marriage Act, which did not recognize same-sex marriage, was unconstitutional. By Amanda Y. Su

Standing before Langdell Hall, Roberta A. Kaplan ’88 braced the Harvard Law School’s 2019 graduating class for what she called a “ life of responsibility.”

Kaplan — the first openly BGLTQ speaker at a Law School Class Day ceremony — gained recognition for successfully representing Edith Windsor in her landmark 2013 Supreme Court case. In that case, the court ruled that the Defense of Marriage Act — which defined marriage as only between man and woman — was unconstitutional.

Kaplan also addressed the first majority-female graduating class in Law School history, according to Class Marshal Zachary A. Fisch, who introduced her.

Kaplan told graduates to “be brave,” and to take on risks where others are unwilling.

“Resist the impulse to play it safe, think consciously about what you're doing, and why you were doing it,” she said. “Becoming a great lawyer requires you to be courageous to press boundaries wherever they exist.”

Kaplan also argued that the “glamorized” image of a lawyer as a “lone defender” is misleading. Instead, she advised the students to rely on those around them and praised her Windsor case colleagues.

“I could not have argued and won the Windsor case without an amazing team of lawyers by my side,” she said. “Who, I say, tortured me in moot court, who agonized over every single word in our brief, and who cried with me when we won.”

Kaplan graduated from Columbia Law School in 1991, following her time at the College as a History and Literature concentrator. She recently co-founded the Time’s Up Legal Defense Fund, which provides legal assistance to those facing workplace assault, harassment, abuse, and retaliation, according to the National Women’s Law Center website.

Law School Dean John F. Manning ’82 also spoke Wednesday, lauding graduates for their commitment to learning and their contributions to the school.

“You've written countless papers, notes, blog posts, briefs, reports. You've respectfully discussed and debated the hardest questions of the day,” he said. “You've argued cases and represented clients, and developed policy. You traveled across the entire world to work and learn and contribute.” 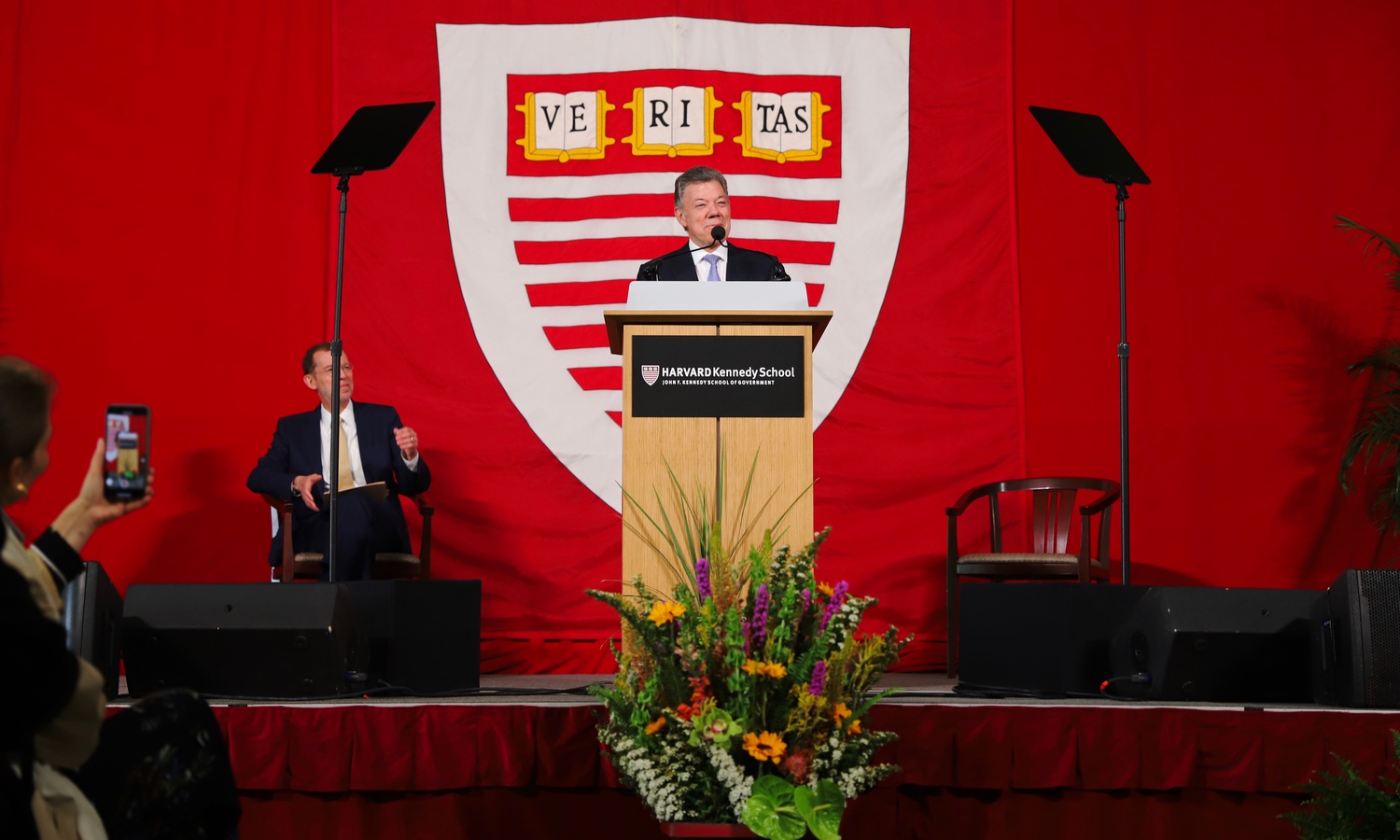 “Leadership is not building walls or building bridges,” Santos said to the crowd gathered in John F. Kennedy Memorial Park. “Leadership is fostering solidarity and respect for diversity. Leadership is not saying my country first, my religion first, or my race first, but saying humanity first.”

Santos served as Colombia’s president from 2010 to 2018. In 2016, he received the Nobel Peace Prize for his efforts to end the 50-year civil war between Colombia’s government and the Revolutionary Armed Forces of Colombia — the country’s oldest and most prominent rebel group.

Santos told graduates that they too can “make possible the impossible” if they recognize the humanity of others — a skill he said he learned from listening to those affected by the violence in Colombia.

“I met many of the women, men, and children who told me their stories and gave me the strength to continue,” Santos said. “They helped me better understand that empathy is the most important value that any leader could have.”

Santos also touched on global issues like climate change, calling efforts to mitigate its effects modern leaders’ “greatest responsibility.” He said that to do nothing could be “equally devastating” as the possibility of nuclear war.

He reflected on his own days as a Kennedy School student in the 1980s when the threat of nuclear war was imminent.

“Back in 1981, the greatest concern was to prevent a nuclear war,” Santos said “Today it should be the preservation of our beautiful and fragile planet, our mother earth.”

Santos closed the speech calling on graduates to lead with “optimism” and “compassion.”

“I challenge you to lead with hope, not fear; to lead with empathy, not apathy; to seek opportunities in every difficulty; to embrace change; to be optimistic in a world flooded with pessimism,” Santos said. “If you lead with a compassionate heart and a positive mind, you will make the world a better place.”