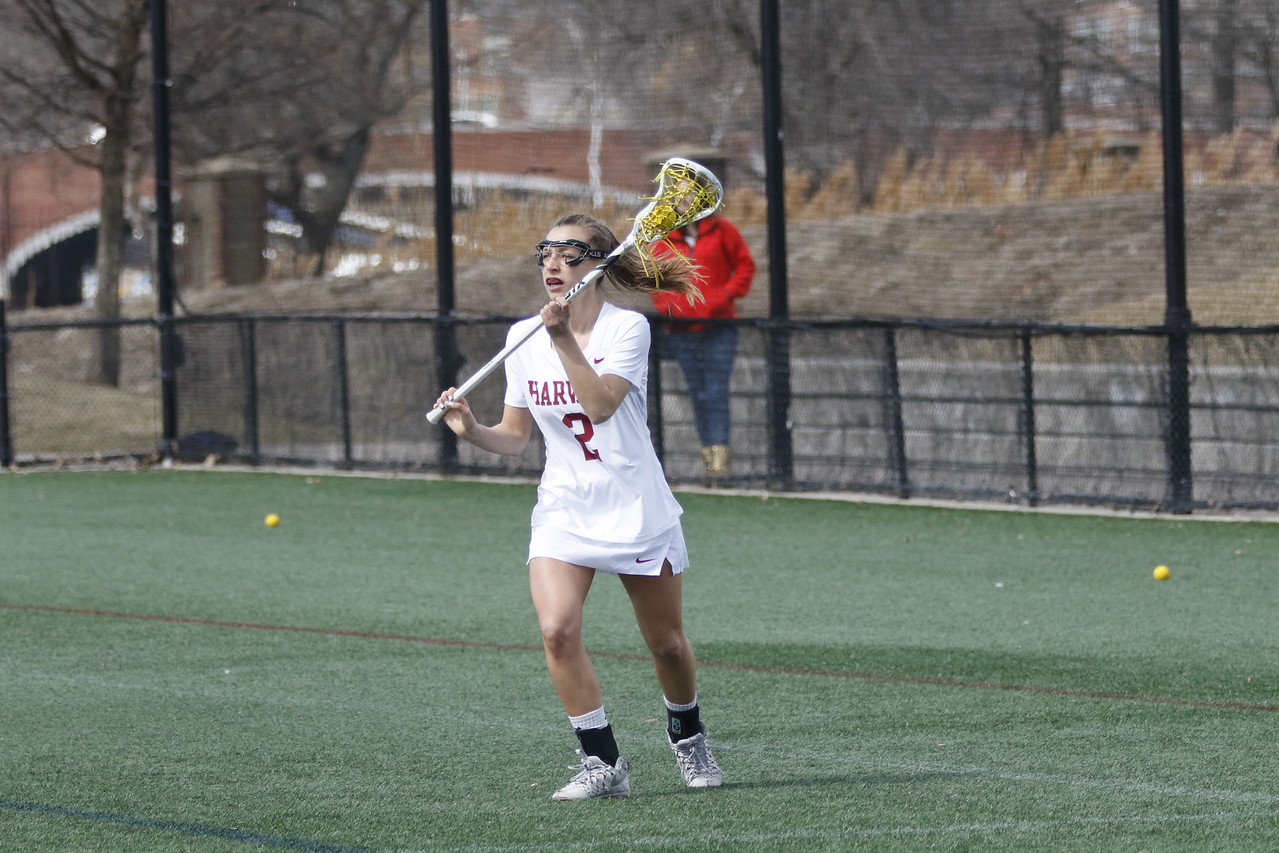 The Crimson look to find greater success in Ivy play after claiming just one win in its first four conference games. By Timothy R. O'Meara
By Derek Schaedig, Contributing Writer

There were just 73 seconds remaining in the contest, as Columbia senior captain Lindsey Ewertsen stood confidently at the eight meter arc awaiting her free-position shot attempt. With the score knotted at 14 apiece, the All Ivy League selection fired her seventh and final shot on the night past sophomore Crimson goalkeeper Grace Rotondo, ending the offensive evening showdown.

Saturday, the Columbia Lions (3-9, 1-3 Ivy League) secured their first Ivy League victory of the season over Harvard, (5-6, 1-3) winning by a 15 to 14 scoreline. The matchup showcased the teams’ offensive power, as both went on scoring runs ultimately culminating in a dramatic ending.

In the final two minutes of play, freshman midfielder Shea Jenkins received a yellow card in an attempt to break up a Lions’ offensive rush — giving Ewertsen all the opportunity she needed to finalize the Columbia victory. The Lions notched two goals in the final 3:16 of the second stanza. However, after Ewertson’s goal, one minute and thirteen seconds still remained in the contest.

A draw control by the Crimson would have provided plenty of opportunity for Harvard to tie the game, but sophomore Lions’ midfielder Alison Schwasnick had other ideas. Despite the Crimson concluding the contest up 20-10 in draw controls, the Crimson lost the most important one of the afternoon at the hands of Schwasnick.

The execution of free-position shots proved to be the determining factor between the two squads. The Lions were six for 13 in their free-position attempts while Harvard only managed to capitalize on one of seven. The Crimson also struggled with ground balls, ending up with a 30-22 deficit to the Lions.

The teams traded leads back and forth throughout the contest, yet at the 20 minute mark, Columbia’s offense took over. The Lions went on a five goal tear, putting them up 13-11 over the Crimson. But Harvard had not conceded yet.

At the 15-minute mark, Harvard responded with a trio of goals themselves. As the shot clock winded down to two seconds, senior captain Keeley MacAfee received a long pass from senior attacker Nicole Baiocco and rifled it past Lions junior goaltender Abby Roberts to put the Crimson up one with 6:38 left in the match. A pair of penalties from the Crimson late in the contest would prove to be too much to recover from, however.

Midfielders Bridget Flynn and Jenkins both received yellow cards within the final two minutes of the contest. Yet Harvard coach Devon Wills attributed the 15-14 loss not to the late penalties taken, but to a lack of execution earlier on in the contest.

“I don’t fault those kids for those cards,” said Coach Wills of Jenkins and Flynn. “We had plenty of opportunities before that.”

Both keepers made saves at crucial moments to hold their teams in the game as well. Keeping the Lions within striking distance, Columbia backstop Roberts halted a point blank shot given up by her defense while the Crimson looked to extend their 11-8 lead. The Columbia net-minder made nine saves on the evening while Crimson backstop Grace Rotondo recorded 14.

The Lions relied heavily on their speed and athleticism in order to secure the win over the Crimson.

“They did a great job of exploiting [their speed],” Coach Wills stated. “They’re a really well coached team and they’re very athletic and I think they used that to their advantage today.”

The Crimson drew upon the leadership, offense, and play-making ability of their captain MacAfee in its attempt to fend off the Lions. The All-Ivy League midfielder tallied five goals and two assists in the contest, leading the Crimson in both categories for the evening. MacAfee also leads the team in both goals and points for the year.

The last meeting between the two teams in March of 2018 ended in a similar result, with a 14-13 loss for the Crimson.

“We had a hard battle with them last year,” MacAfee said of the Lions. “Any game in the Ivies are going to be a hard battle...but we’re just going to use it to fuel us to move forward for the rest of our season.”

Despite Harvard starting out 1-3 in conference play, opportunities loom to recover those points. Currently sitting at sixth in the Ivy League standings, the Crimson will look to make up that deficit in the three remaining conference matchups against Princeton, Brown and Penn.