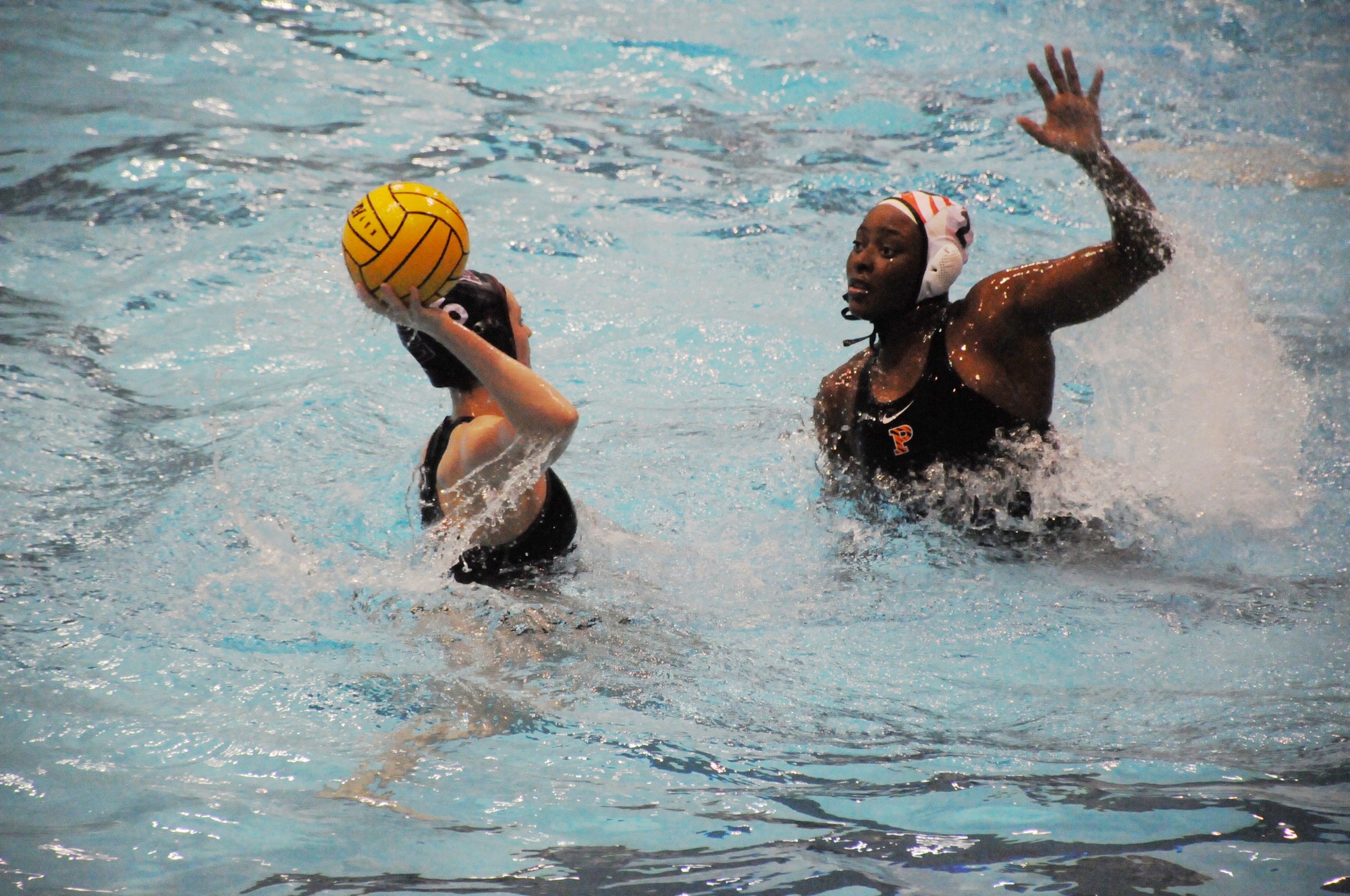 The Crimson is enjoying its most successful start to a campaign in the history of the program. The squad will enter early March’s Harvard Invite, its first taste of conference play, looking to defend its home pool and its flawless record By Kathryn S. Kuhar
By David Manikas, Crimson Staff Writer

Two months into its season, the Harvard women’s water polo team has found itself amending the history books. Off a perfect 9-0 start, the No.16 Crimson has jumped out to the program’s best start to a season since its founding in 1997.

Starting its season in New Rochelle, N.Y., Harvard faced off against Iona and Villanova. The Crimson got out to a commanding lead against the Gaels before undergoing a scoring rally as each side tacked on goals for their respective teams. However, the Gaels were no match for the late-game heroics from first-year attacker Borden Wahl and senior attacker Kristen Hong, as the game ended with Harvard tallying 10 goals to Iona’s seven.

Against the Wildcats, Harvard doubled its output from the contest against the Gaels, scoring 20 goals with contributions from Hong, senior defender Haley Bowe, juniors Sofia Carrera-Justiz and Lana Gorlinski, and first-year Inde Halligan.
For their impressive performances, Halligan and Hong, last year’s team leader in goals and steals, were honored by the CWPA as Division-I players of the week. Halligan was also awarded the Rookie of the Week award for her performance.

The first weekend of competition included some of Harvard’s freshman talent on display. The team, composed of a balanced mix of members in each year, includes five first-year members. Inde Halligan contributed early on, netting one in her first period of collegiate play. The Sydney, Australia, native continued the scoring in the second game, contributing to the 20 goal-total that dwarfed the Wildcats’ 12.

Wahl, a Greenwich, Conn., native, scored in her first game as well, adding a goal in the final period against the Gaels. Finally, Zoe Banks’ debut in goal for the Crimson was a success, as she tallied seven saves and assisted on a goal versus Iona.

“A lot of the reason why we’re seeing success is because of the freshman class that just came in,” said Hong when discussing the factors contributing to the team’s success early in the season. “They’re really smart. Coach Minnis has recruited girls with higher and higher water polo IQ’s.”

The following weekend, the program made history in its stint at the Bruno Classic hosted by Brown University. After taking care of No. 16 Wagner and Siena on the first day of competition, Harvard faced off against LaSalle the following day. Not only did the Crimson win by its largest margin of the season, but it also recorded its first shutout in program history. To go along with the 17 netted goals on the day, the team’s defense prevented LaSalle from having a chance of its own at the back of the net. Banks sent back five shots and continued her impressive season in net.

Making history a single time wasn’t enough for the Crimson. Following the Bruno Classic, Harvard was tied for its best start in program history, as the 5-0 team last reached such a record in head coach Ted Minnis’ first season in 2011.

Looking to remain undefeated, the Crimson set its sights on the next weekend of competition at the Bison Invite, hosted by Bucknell University. Making the long road trip to Lewisburg, Penn., Harvard was set to face off against Gannon and Salem Universities on Saturday before preparing for another double-header on the following day.

In its first matchup on Saturday, the Crimson cruised to an 18-5 win, taking down Gannon with the help of a seven-goal run after taking a two-goal lead in the first quarter. The second game wasn’t much different, as the Crimson found itself with a three-goal lead at the end of the first period against Salem and eventually an 11-5 finish, taking down Salem to win its seventh straight game out of the gate. Banks shone once again, recording 21 combined saves on Saturday to go along with three steals and three assists. Hong, in her own right, contributed seven goals on the day.

The second day of the Bison Invite saw Harvard in two rematch games from the Bruno Classic, squaring off against Siena in an early 8 AM start and Wagner shortly after the conclusion of the first game.

Against the Saints, the Crimson found themselves down early, but not for long. An offensive run to respond to Siena’s goal left Harvard with a three-point lead at the end of the first quarter. The game concluded with the Crimson doubling the Saints’ total, 16-8. Harvard had six different members score in the contest.

The rematch against Wagner followed a much closer narrative. Wagner, now ranked No. 18, sought to avenge its loss to the Crimson a week prior. The contest saw a defensive struggle between both sides in the first quarter before the teams began exchanging goals in the second.

By the third quarter, the two squads were tied at nine, with both looking to capitalize on an opportunity. Once again, Harvard’s first-years were crucial in the game’s outcome. Wahl’s late goal in the contest ultimately decided the game, adding to her four other scores on the day.

Banks’ late-game steal sealed the deal, and just like that, the Crimson found itself undefeated through nine games. Banks’ excellent play throughout the weekend earned her Defensive Player of the Week honors from the Collegiate Water Polo Association.
Regardless of the historic start, coach Minnis is looking ahead to continue the success throughout the rest of the season.

“This team has a good mix of older and younger girls and we still have a lot of work to do to achieve our goals,” Minnis said.

Ahead for the Crimson is a change in venue, as the team trains for the Harvard Invite beginning on March 1st. Having such a long break between their most recent match and their next weekend of competition, the team has an opportunity to rest in order to keep its perfect season in tact. However, coming back with the right mindset after such a break is crucial.

“It’s like preseason all over again. It’s about working our butts off, getting into better shape, and having some sort of inter-team competition in order to stay sharp,” Hong said. “Time is going to make us even more excited to play, and I think that’s what’s really great about this break.”

—Staff writer David Manikas can be reached at david.manikas@thecrimson.com.