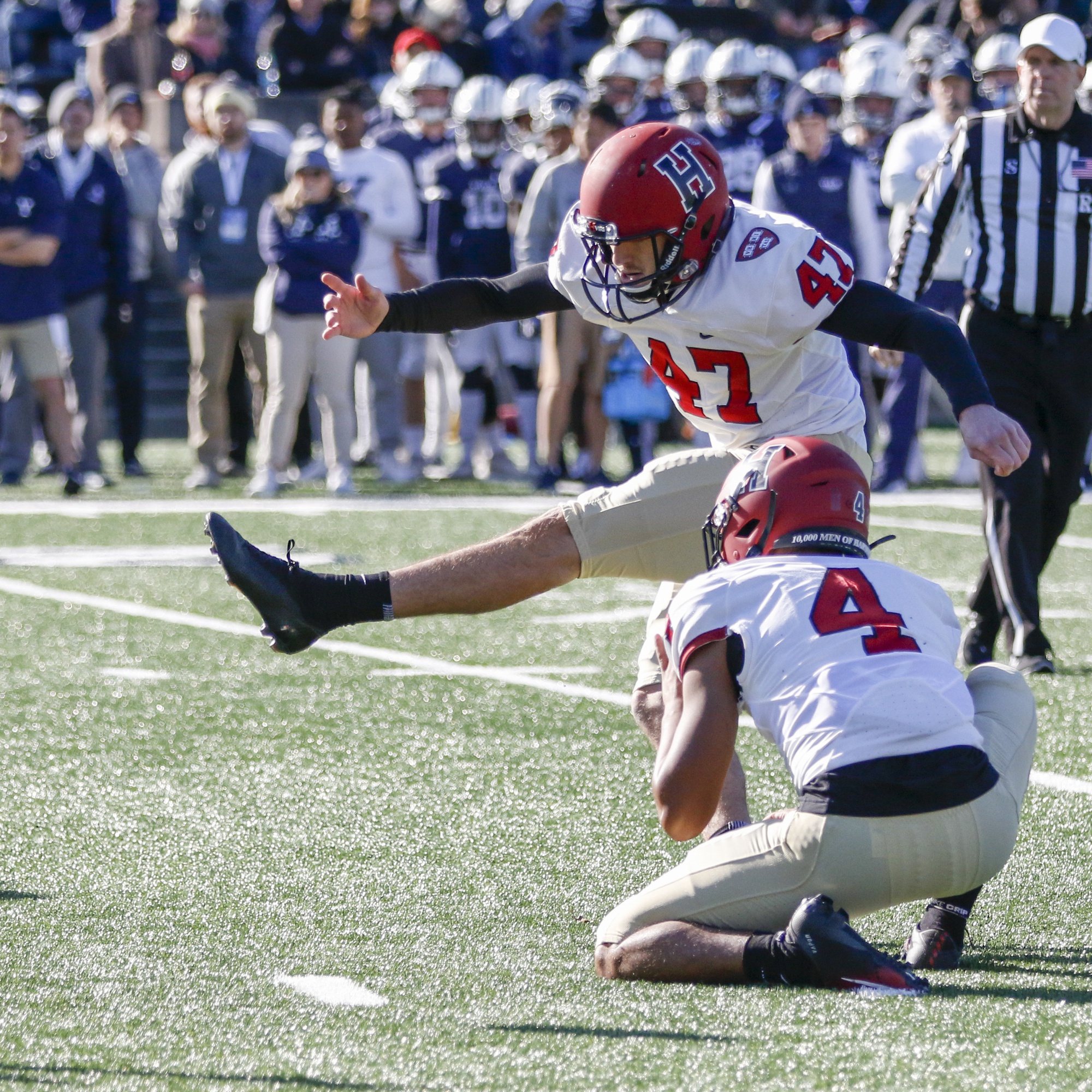 In a double-overtime thriller, No. 24/25 Yale defeated Harvard in the 136th rendition of The Game, 50-43. With the victory, the Bulldogs claimed a half-share of the Ivy League title, sharing the crown with Dartmouth. En route to earn the victory, Yale (9-1, 6-1 Ivy) overcame a 19-point deficit, with 17 consecutive points in the fourth quarter alone. 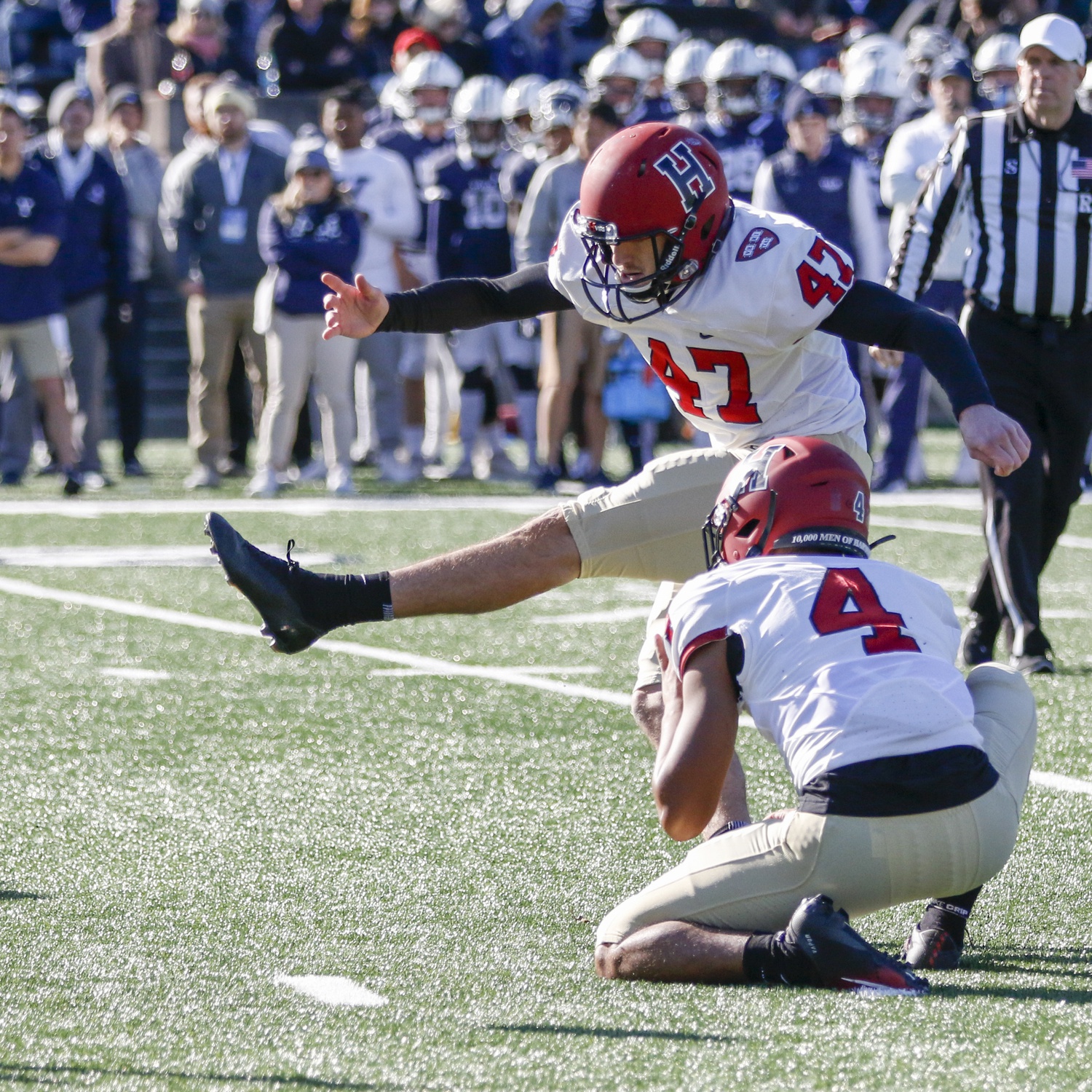 Kicker - Senior kicker Jake McIntyre boots a 28-yard field goal early in the first quarter to equalize the score at three apiece. The senior finished his career at Harvard with 39 career field goals, a school record. 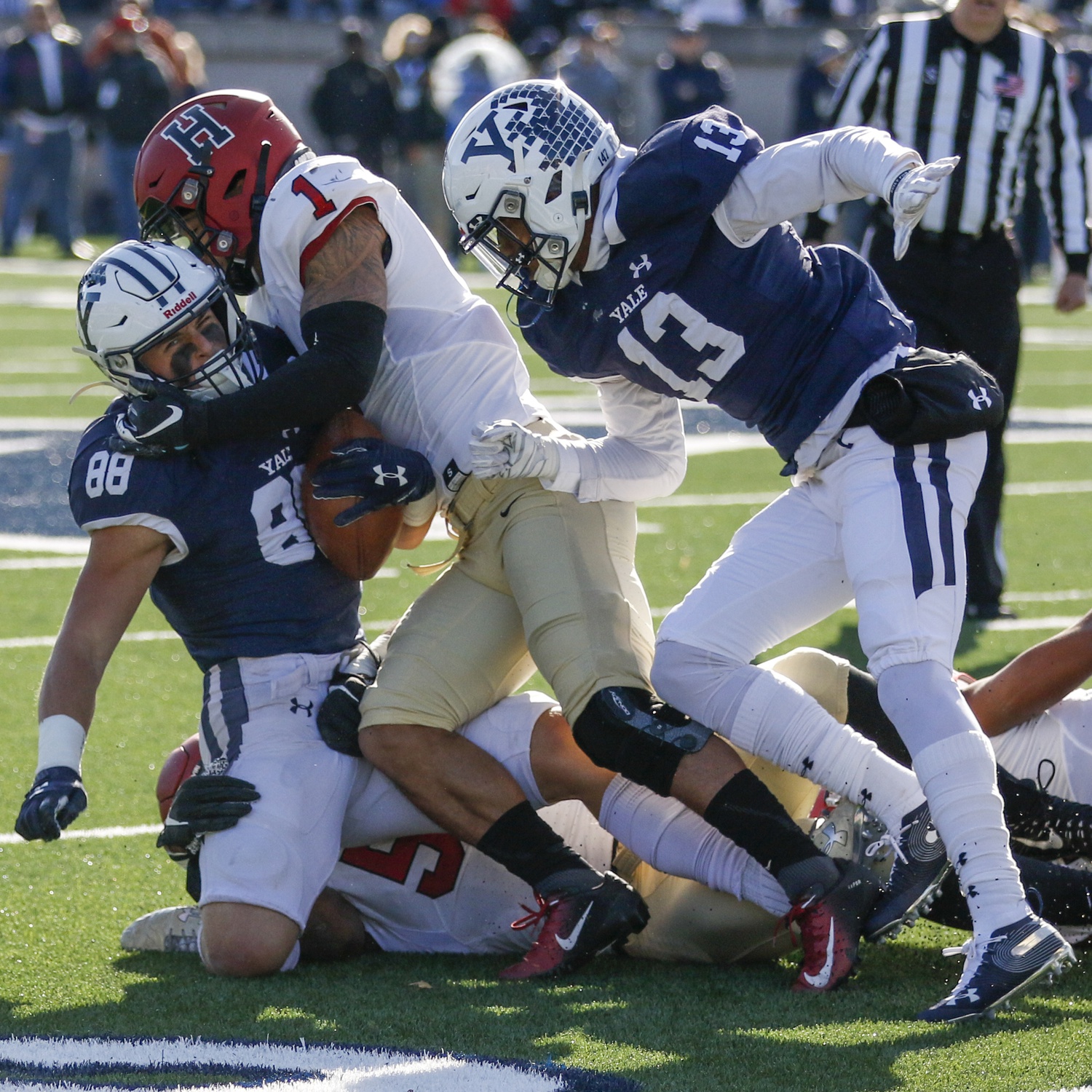 I Am The Captain Now - Harvard captain Wes Ogsbury tackles Yale captain JP Shohfi early in Saturday's contest. Both schools continue the tradition of selecting only a single captain, a rarity among collegiate football teams.
By Timothy R. O'Meara

Yale was first to invigorate its fans with a three-point boot in the first drive of the contest. Harvard's record-holding kicker, Jake McIntyre, countered with a 28-yarder of his own on Harvard's first offensive attempt. 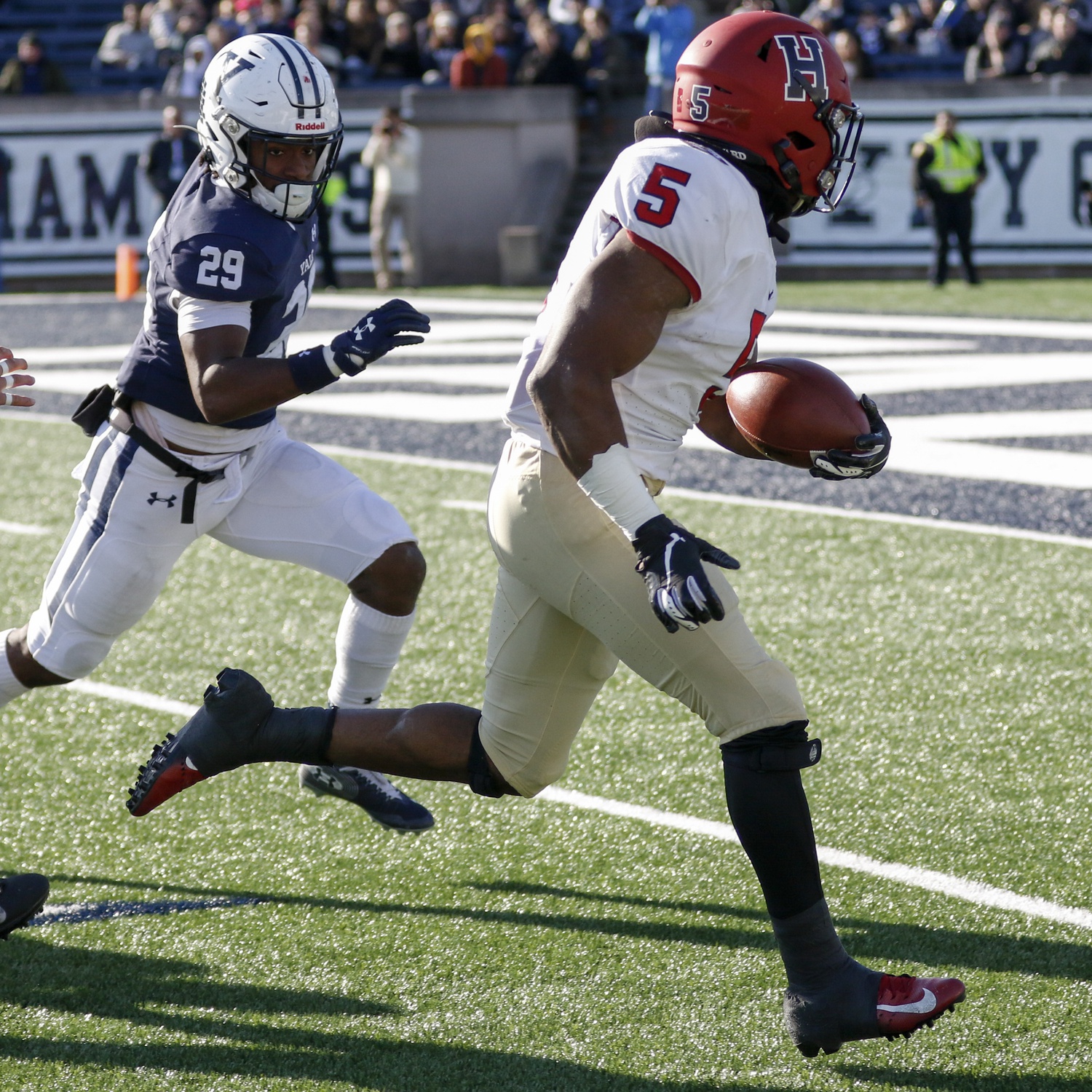 Dr. Watson - Junior running back BJ Watson takes his screen pass from classmate Jake Smith 27-yards for the first touchdown of the contest. 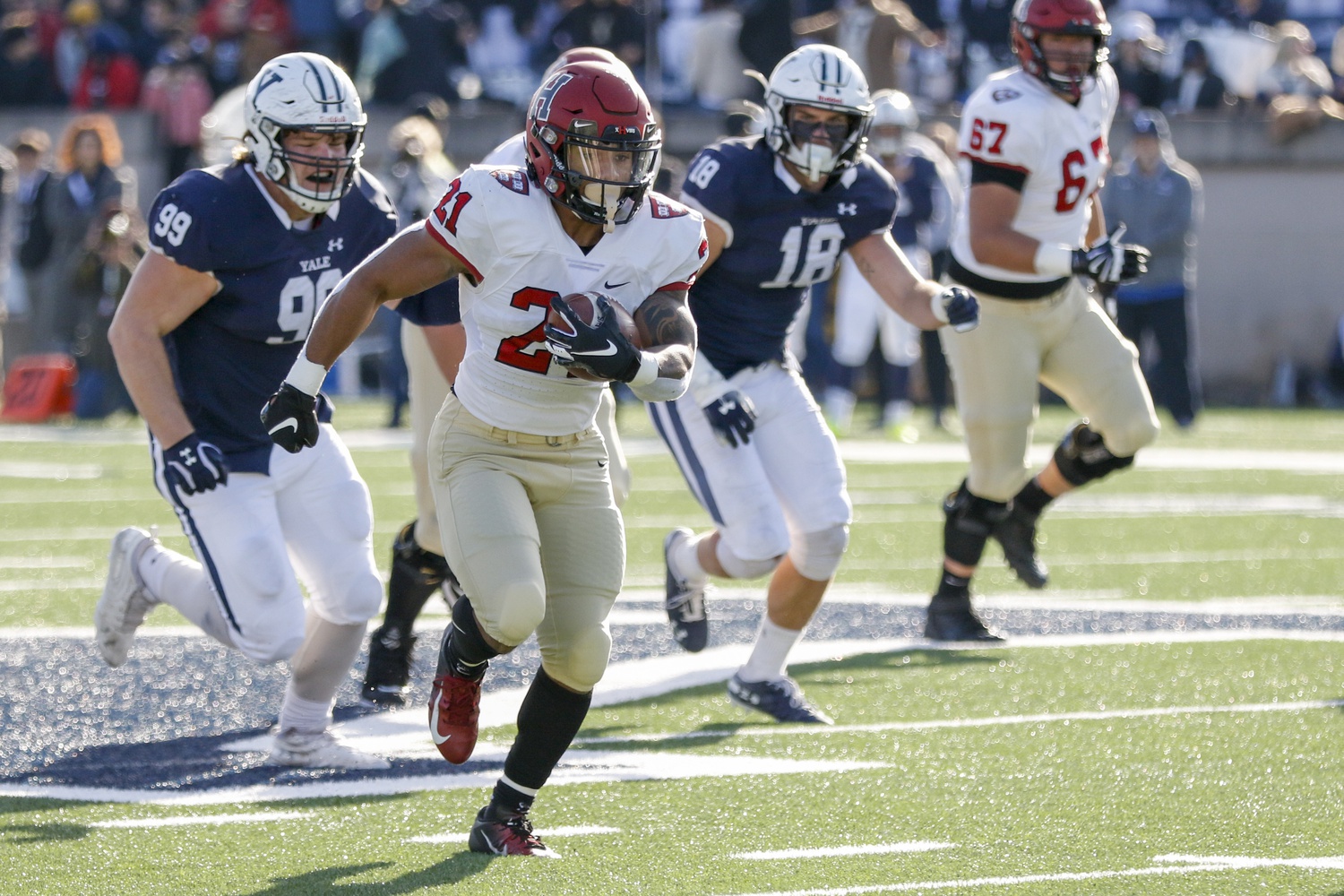 First-Year Phenom - Freshman running back Aidan Borguet took his first give 47 yards for a touchdown. His touchdown here, late in the second quarter, earned Harvard as 12-point lead heading into the locker room.
By Timothy R. O'Meara

Harvard had taken a quick, commanding lead of the contest by the conclusion of the first half. A pass from junior quarterback Jake Smith to B.J. Watson accounted for The Game's first touchdown. Freshman running back Aidan Borguet scored next. The first-year, on his first run of the afternoon, took the give 47 yards. 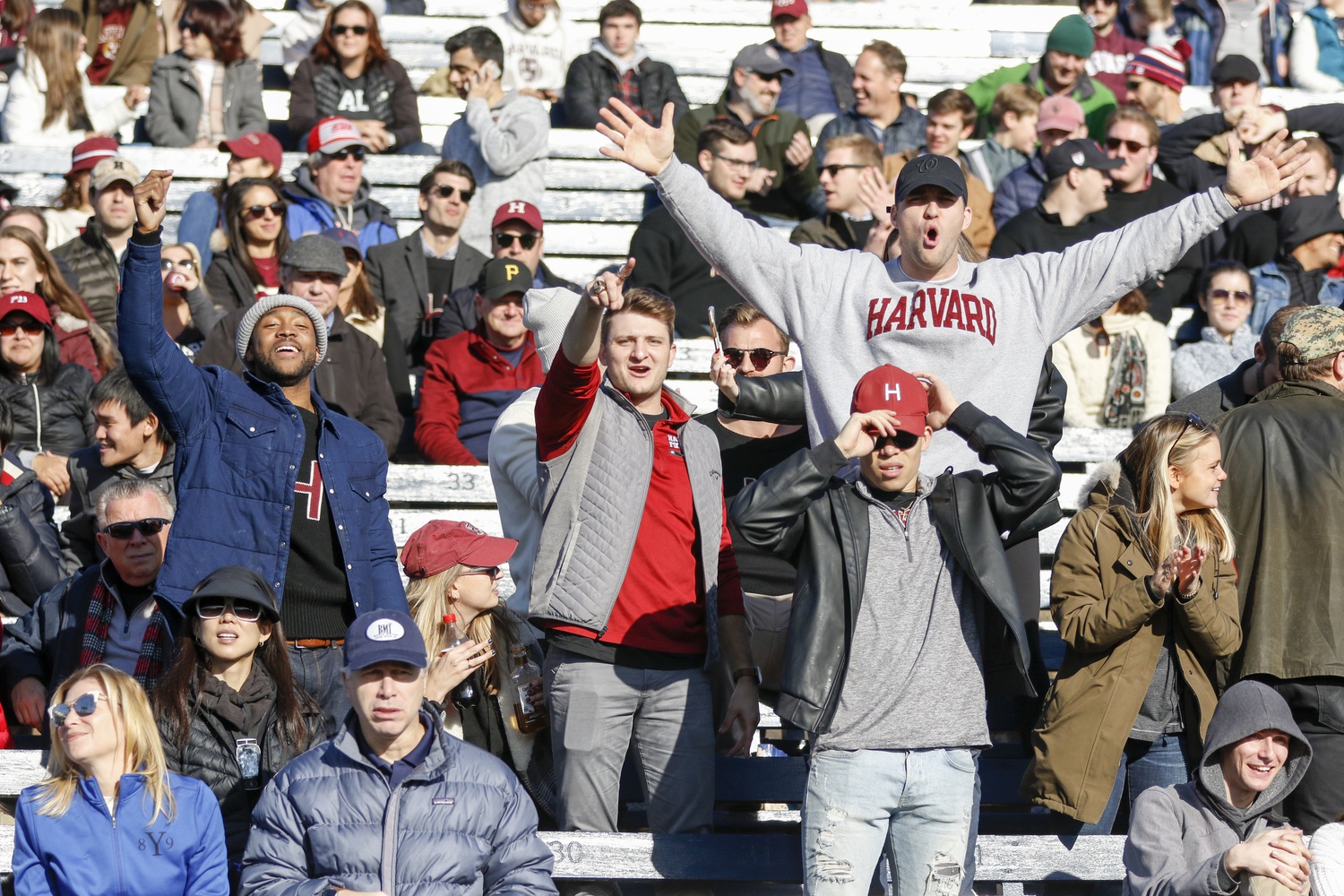 Going into halftime, the Crimson led the home team, 15-3. 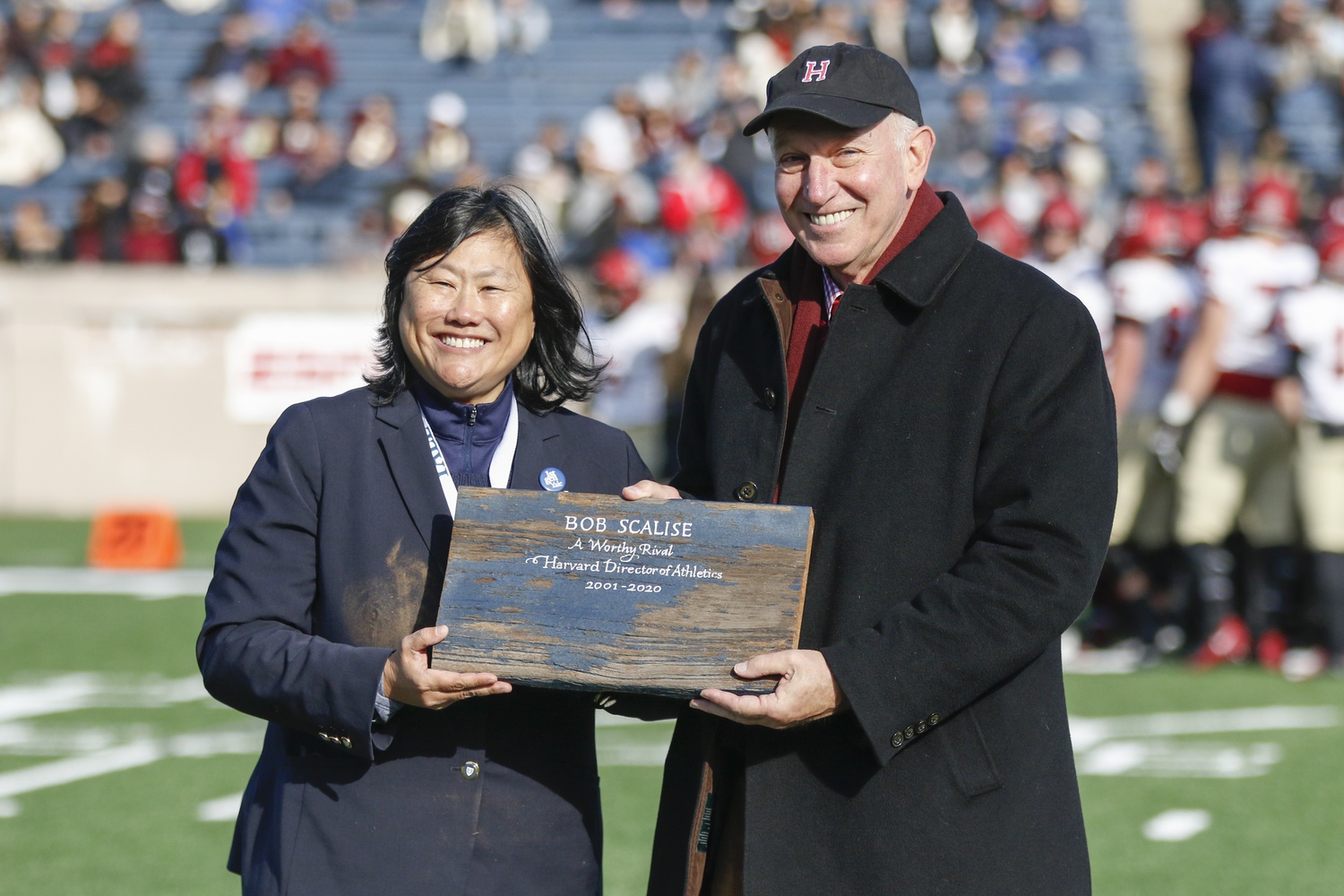 Yale's Director of Athletics, Victoria M. Chun, honors her Harvard counterpart, Bob Scalise, with a piece of the original Yale Bowl. Scalise is set to retire following the conclusion of this academic year.

As halftime drew to a close, a group of protestors stormed the field initially from the Harvard student section and gathered at the center of the turf. As the protest wore on, the demonstrators were joined by other members of the crowd. The protestors held up signs and chanted, urging both universities to divest their endowments from fossil fuels and Puerto Rican debt. The protest lasted for about half-an-hour and concluded with security walking out protestors. 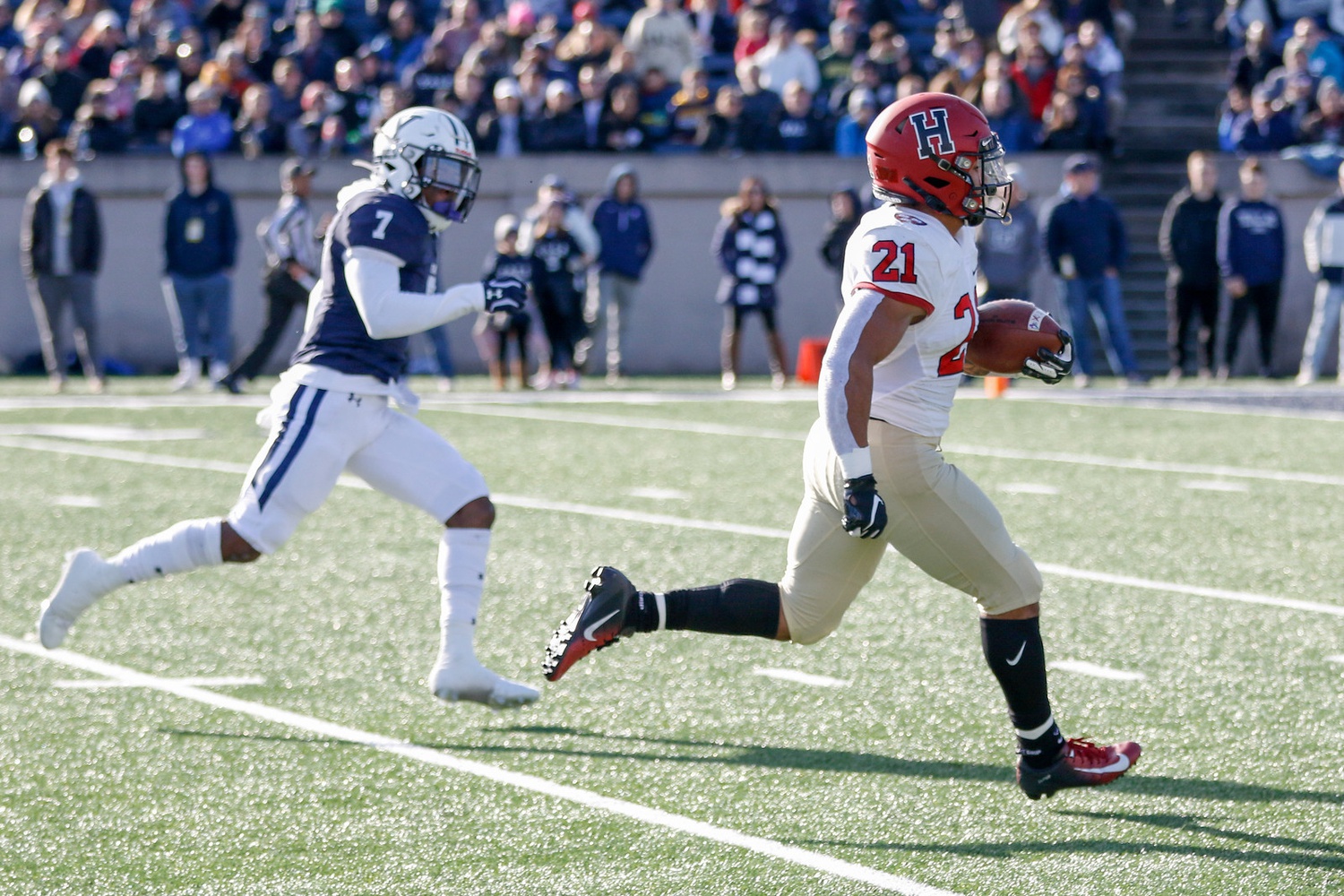 Harvard opened in much the same way it had left off. Borguet sprinted 59 yards for a Harvard score, pushing the score to 22-3 — Harvard's largest lead of the contest. 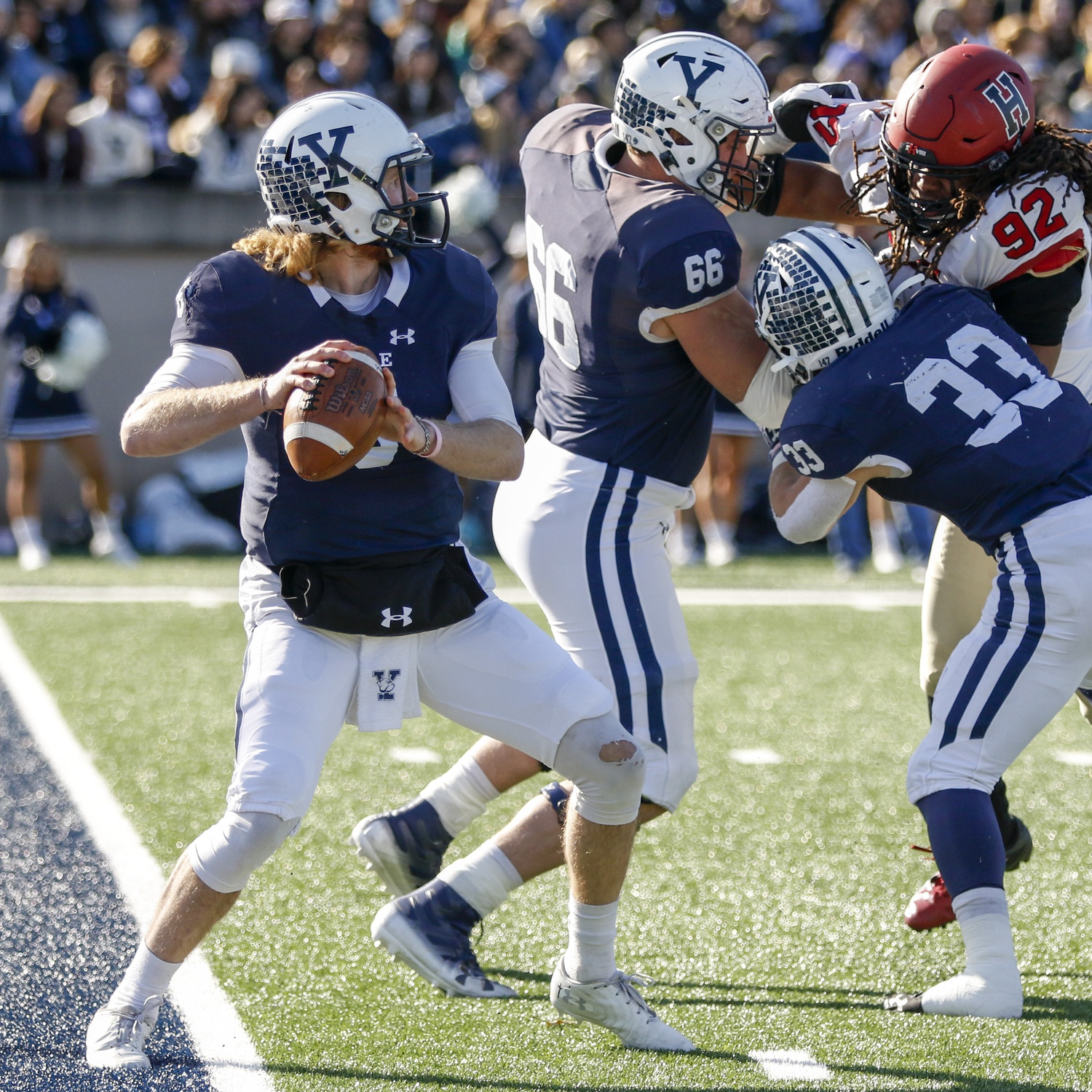 Kurt Locker - Yale's senior quarterback Kurt Rawlings lived up to the hype on Saturday. The division leader in four categories, Rawlings threw for 417 yards and three scores on Saturday. He also led the team in rush yards adding a touchdown on the ground. 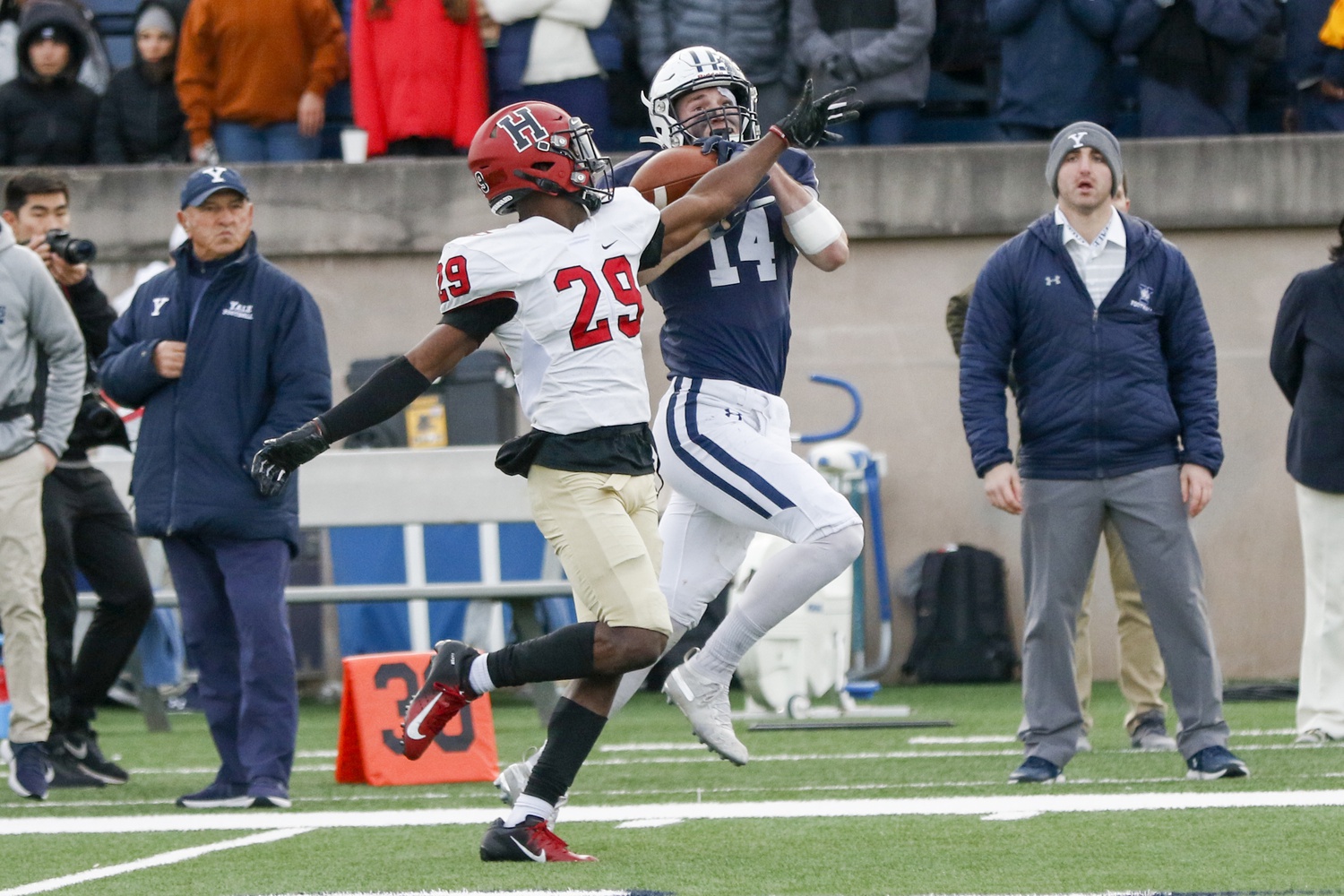 Yale senior quarterback Kurt Rawlings came alive in the third quarter, completing long passes and sprinting around the Harvard defense as he had done to other opponents all season. Prior to the contest, Rawlings led the division in passing efficiency, touchdowns, yardage, and average yards per game. By the end of the third quarter, Harvard led only 29-19. 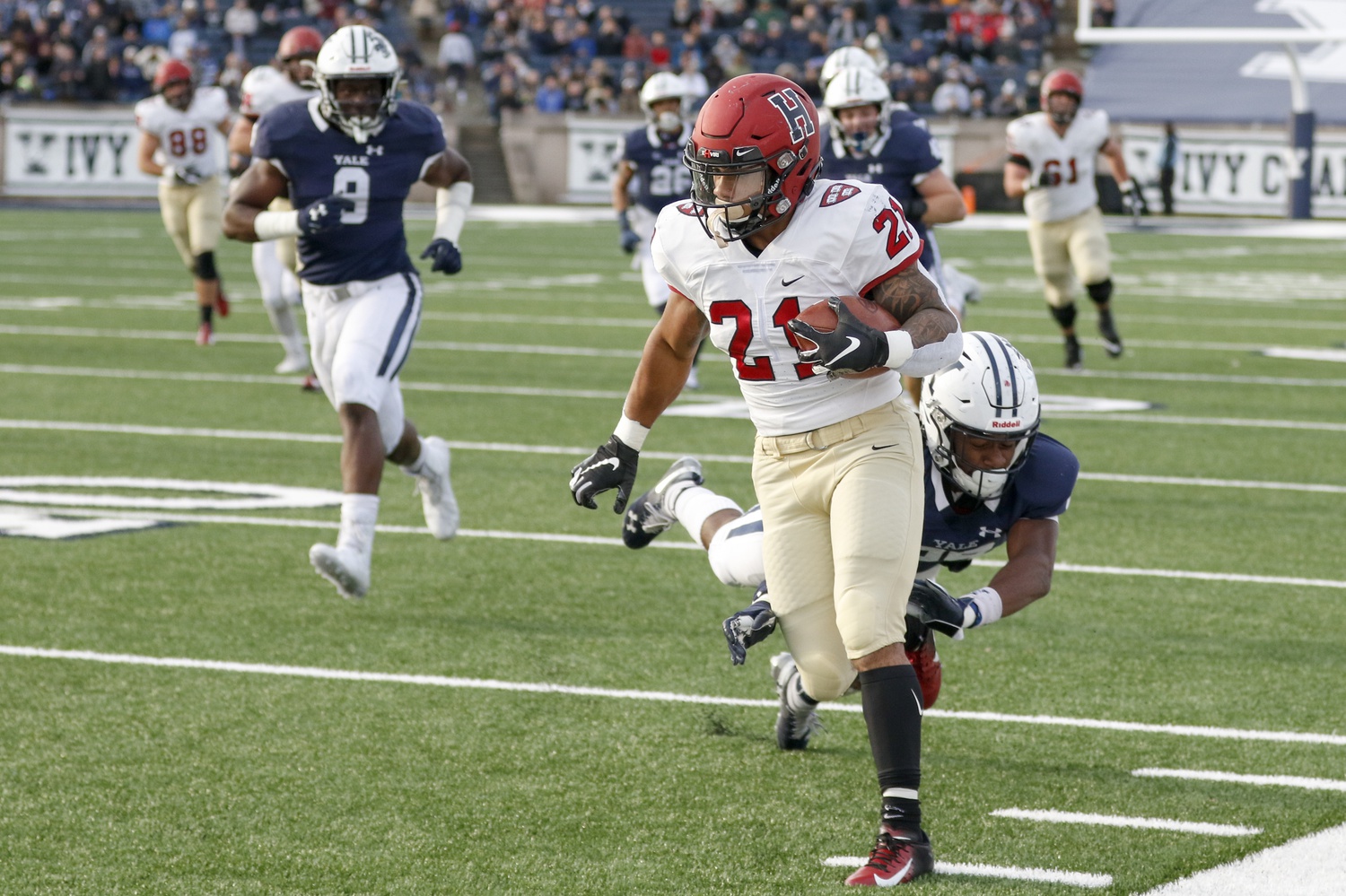 Twenty Fun - Freshman sprinter Aidan Borguet outruns the Yale defense en route to his fourth and final score, a 67-yard sprint down the friendly sideline. The first-year finished with four touchdowns on 10 attempts, logging 264 yards. By his fourth score, Borguet was averaging 40.3 yards a give. 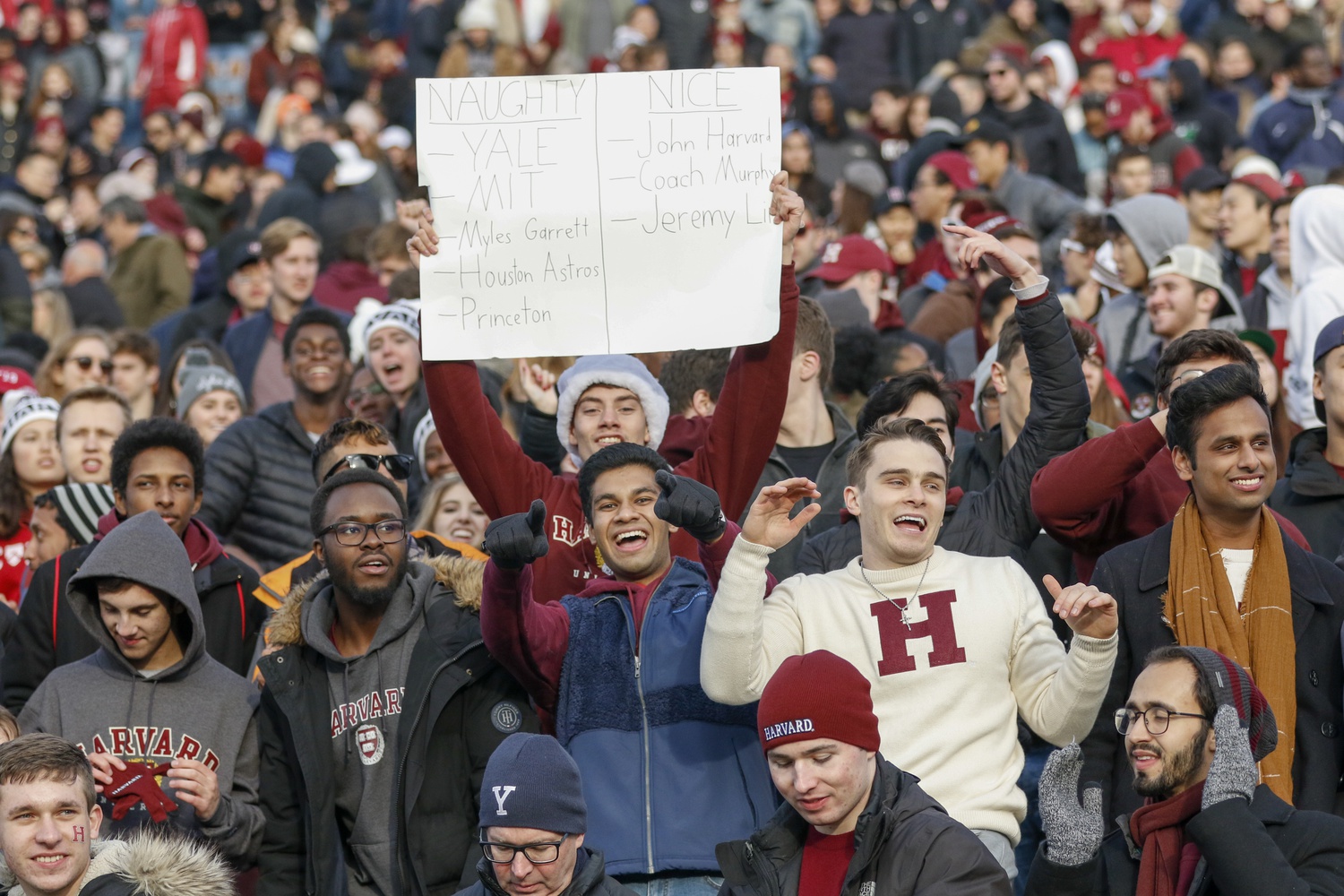 Borguet scored again, this time on a 67-yard sprint down the visiting sideline to extend the lead to 17 points. 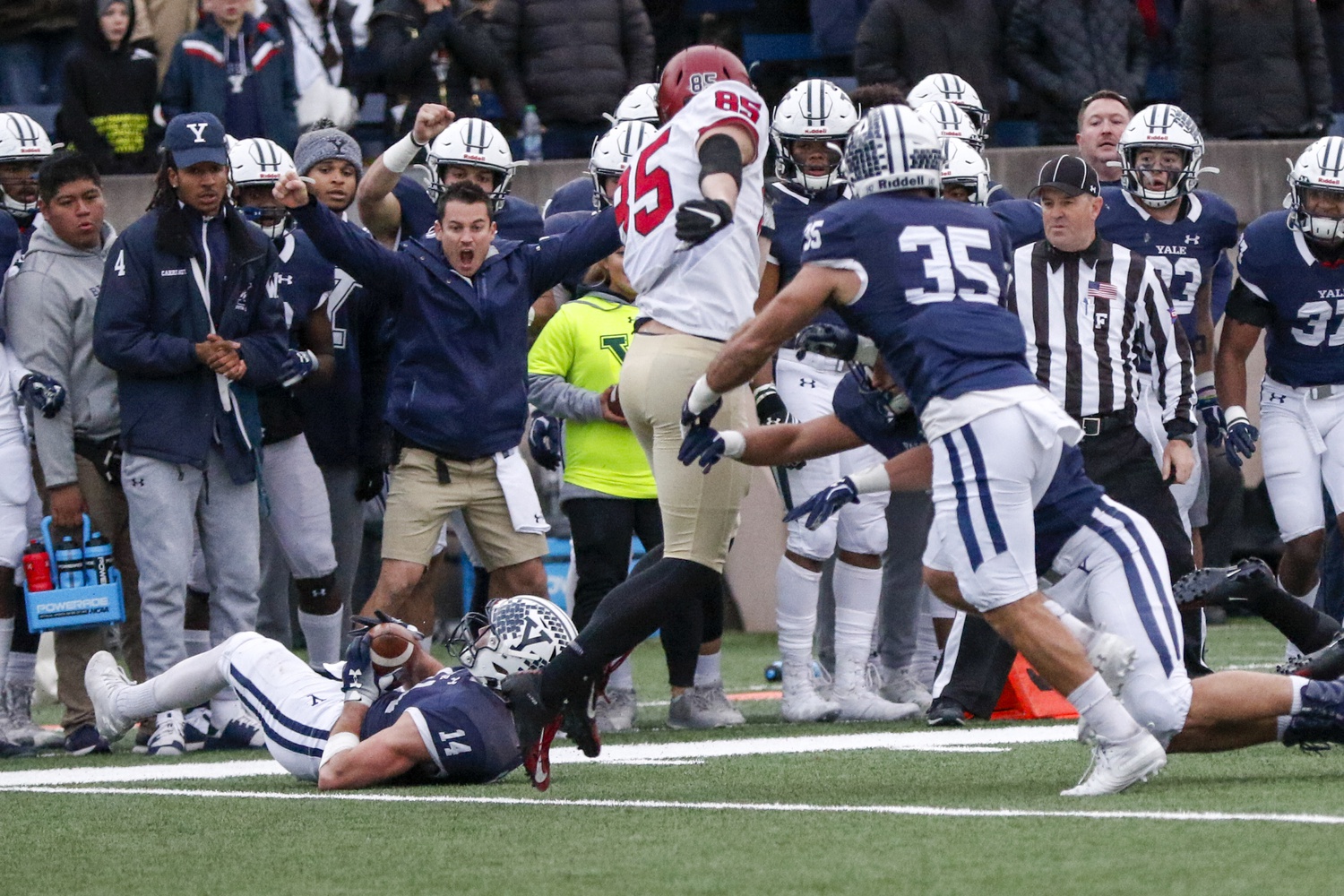 A field goal and touchdown drive that featured seven completed passes by Rawlings set up a Bulldog onside kick with 1:28 left to play. Yale recovered the kick with less than 50-yards between the home team and a tie game. 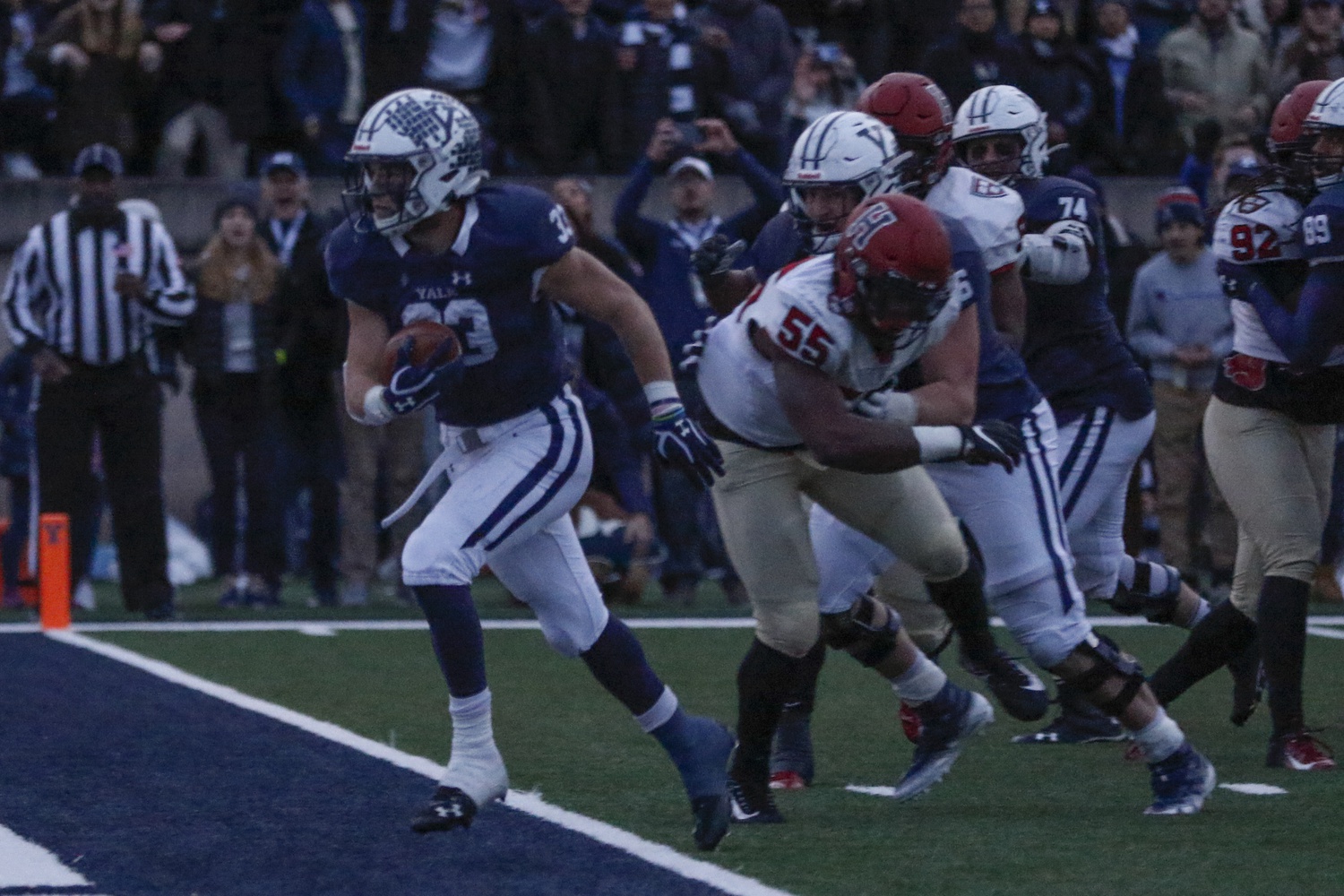 Both teams scored in the first overtime. Without lights and the extended gameplay due to the protest, the two teams played the second overtime in near darkness. Taking the ball first, Yale scored in three plays on a four-yard touchdown run from running back Zane Dudek. Harvard failed to convert, losing the contest. 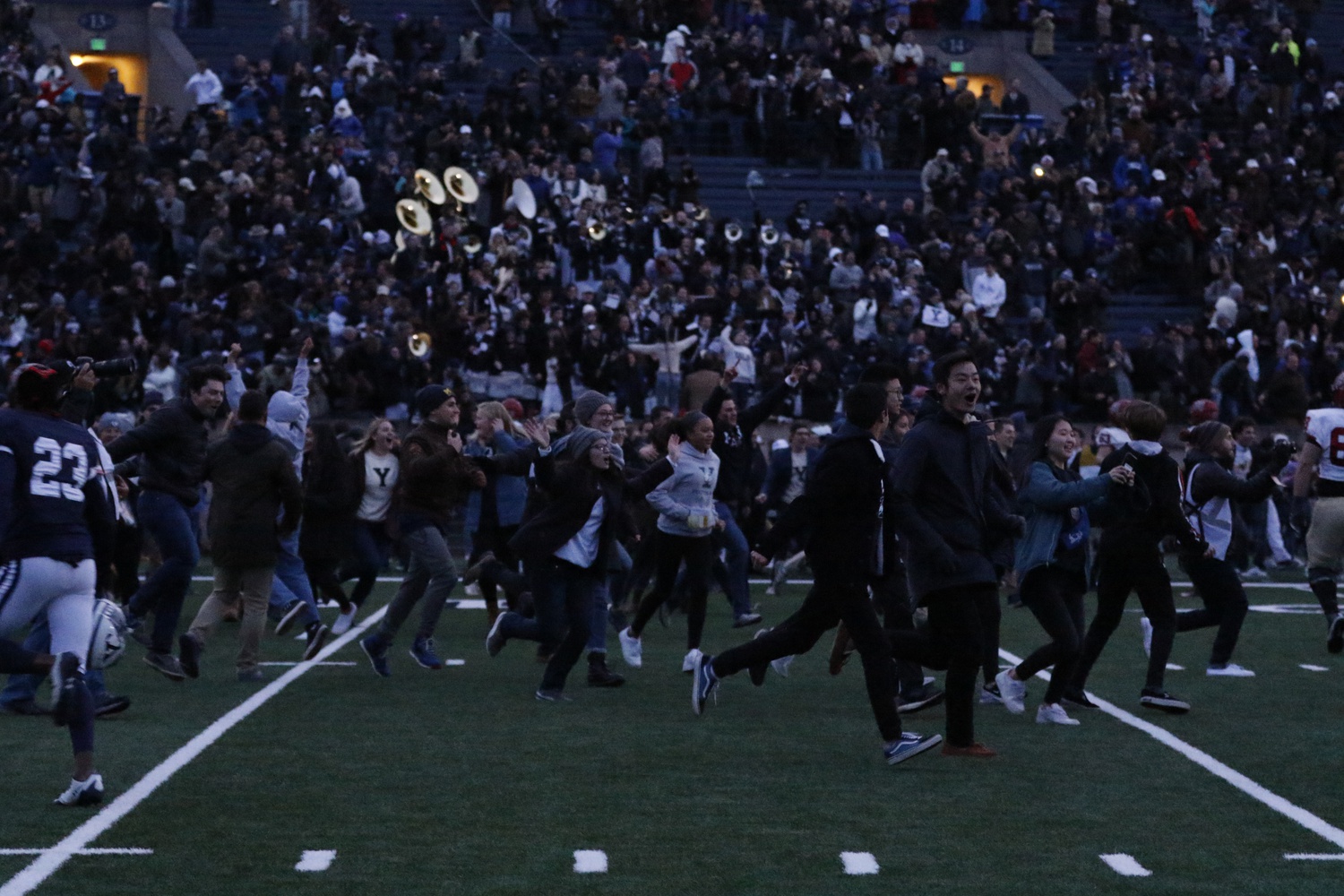