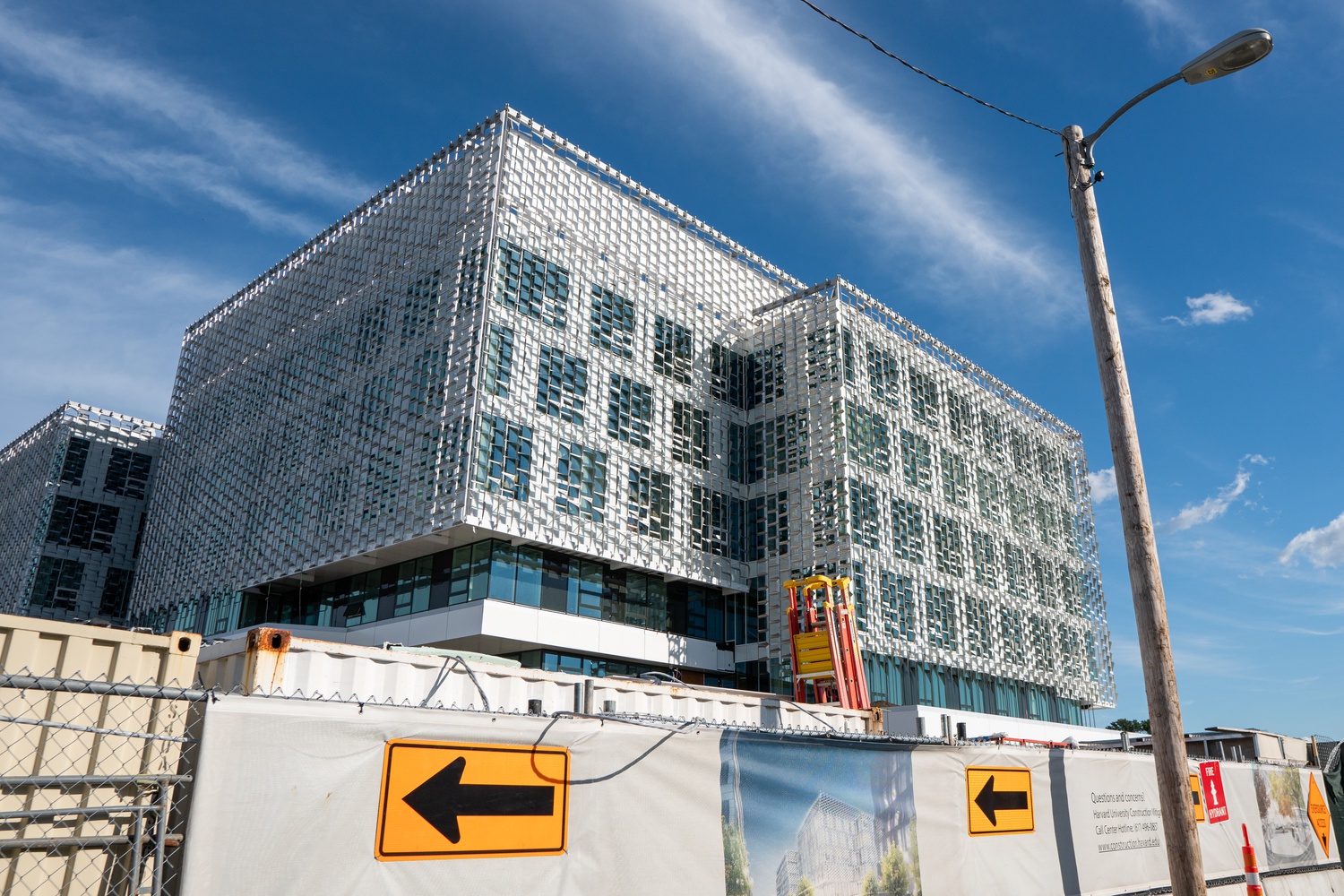 Construction work continues on the Science and Engineering Complex in Allston. The building is on pace to open by fall 2020, and will be located next to the Enterprise Research Campus. By Brendan J. Chapuis
By Ruth A. Hailu and Amy L. Jia, Crimson Staff Writers

As the School of Engineering and Applied Sciences prepares to expand into the new Science and Engineering Complex in Allston — which is slated to open in June 2020 — current and prospective SEAS concentrators are conflicted about the expansion.

In an interview with The Crimson earlier this month, Dean of SEAS Francis J. Doyle III said the new complex will house several collaborative spaces — including active learning labs and a maker space — designed to foster exchanges of ideas between students and faculty members.

Several students said they are excited to take advantage of the new building's state-of-the-art facilities.

Rushi A. Patel ’21, a Biomedical Engineering concentrator, said the increase in space will incentivize students to work on long-term projects that require storage — something he said he finds difficult given the current space constraints.

He added that the complex's proximity to resources like the Harvard Innovation Lab — a center for creative ventures next to the Harvard Business School — will foster an “interdisciplinary view of engineering” that lends itself well to innovative work.

Other students, however, said they were concerned that the geographical distance between Harvard’s Cambridge and Allston campuses would make taking certain courses less appealing.

“It sounds like it’s going to be a pain, especially for people in the Quad, because it’s just so much farther away,” said Kyle C. Sutton ’21, a Computer Science concentrator and Cabot House resident. “I’m basically taking every STEM class I need to take this year so that I don’t have to go to Allston next year.”

Computer Science and Philosophy joint concentrator London Lowmanstone IV ’21 wrote in an email that he was “worried” about being late to classes due to the required commute, particularly because he often likes staying after class to talk to students and professors.

Some students who are interested in taking classes both within and outside of SEAS said they think the distance might pose difficulties in doing so.

Computer Science concentrator Rachel Y. Hong ’21 said though she is optimistic about the physical expansion of SEAS, she also believes the move might make Engineering “more isolated than it already is.”

“I’ve definitely wanted to prioritize taking like music classes and humanities classes alongside STEM classes,” said Isaac S. Sebenius ’20, who has a secondary in Computer Science. “I hope that continues to be able to happen logistically.”

Jacob R. Jimenez ’23, who is considering a concentration in Engineering, wrote in an email that he worries the Allston campus may not be as accessible to non-SEAS concentrators.

“I want to be able to utilize the engineering labs and facilities whether I concentrate in the subject or not,” Jimenez wrote. “I think it’s important to make engineering resources available to all interested students on campus and fear that the Allston campus may create an even larger divide between SEAS and the rest of the college.”

Doyle said in an interview with The Crimson that he and Dean of the College Rakesh Khurana have been working on plans to “bring more of the teaching mission of the FAS and the College into the [Science and Engineering Complex]” through incorporating non-engineering courses as well.

In light of these concerns, a majority of interviewed students said they hoped administrators would provide more information about the expansion’s logistics in the coming months.

“Right now, I’m sort of between intrigued and apprehensive, mostly because I don’t really have any idea what the new schedule is going to look like,” Computer Science concentrator Leor B. Fishman ’21 said.

Qin said that while SEAS administrators have hosted several open discussions for students interested in learning more about the move, he believes “the wider student population is not at all well prepared or as well informed about what the move is like.”

SEAS spokesperson Paul Karoff wrote in an emailed statement that SEAS administrators have done their best to communicate information to students regarding the upcoming expansion through both email and in-person meetings.

“We will expand our communication efforts, including student town halls, as the opening of the Science and Engineering Complex gets closer, and as more details about transportation, dining options, and the like become available,” he wrote.

Joon Y. Kim ’21, a Computer Science concentrator, said he predicts students will grow accustomed to the change with time.

“I think most people just think it’s like a location change — once it happens, it happens,” he said. “They’ll just get used to it.”