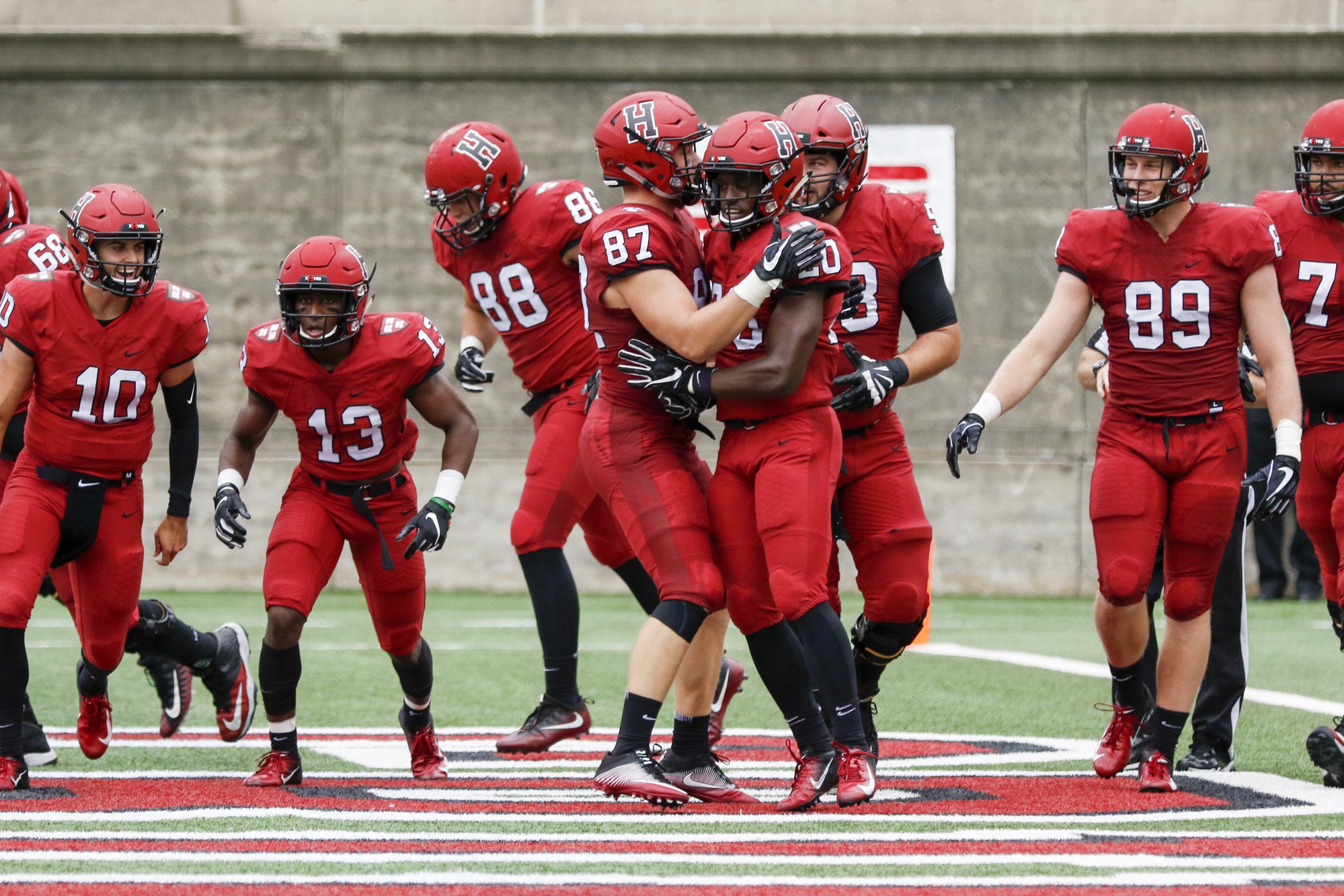 Harvard’s offensive and defensive lines propelled the team to victory this weekend over San Diego. The Crimson’s upper hand in the trenches explains the squad’s drastic advantage in the ground game: 266 yards to just 93. By Timothy R. O'Meara
By Jack Stockless, Crimson Staff Writer

When a team that finished the previous fall with a 10-1 regular season record, competed in the FCS playoffs, and had its quarterback named to this year’s Walter Payton Award watch list visits town, teams cannot expect to walk away with a three-touchdown margin of victory. But Harvard football (1-0) did just that on Saturday, as it soundly defeated San Diego (1-2), 36-14.

A THUNDERSTORM IN THE FORECAST

It makes sense that football teammates often end up as roommates, but sophomore duo Aaron Shampklin and Devin Darrington had more in common than just their address on Saturday. The two worked seamlessly out of the backfield, offsetting pass plays with a combination of power and speed to fuel the Crimson offense.

Darrington (nicknamed “Thunderbolt” according to head coach Tim Murphy) and Shampklin (“Lightfoot”) served two different but complementary roles in the team’s first game. Darrington fits the mold of a smashmouth runner, slowly grinding down opposing defenses and carrying the ball a considerable amount of times. Shampklin, on the other hand, is shiftier and makes hard, quick cuts to blast past defenders. Darrington is listed at 5’9”, 205 pounds, while Shampklin is 5’10”, 180 pounds.

“Teams have to game-plan for both of us,” Shampklin said. “And then we also have a lot of other great running backs in the backfield that you guys haven’t even seen yet, so once they come out there, teams are really going to have to game-plan against that.”

The emergence of these two running backs could not have come at a better time. Senior rushers Charlie Booker and Semar Smith missed the game for unspecified reasons—Booker was listed as the top running back on the pregame depth chart but did not see the field. Last season, Booker rushed for 733 yards (5.2 per carry) and scored six touchdowns.

ON THE FRONT LINES

Murphy often credits the big men up front as being the building blocks of Harvard’s success, and they certainly lived up to their coach’s billing on Saturday. The offensive line paved the way for a punishing ground game and gave sophomore quarterback Jake Smith tons of time to go through his progressions in the pocket.

On the flip side, the defensive line did just the opposite, as it stunted much of the Toreros’ running progress and hurried quarterback Anthony Lawrence numerous times to throw him off his game.

“Number one, we made a commitment to doing a better job running the football in the offseason in a variety of ways,” Murphy said. “Two, it all starts with defense, and if you hold any opponent we have on our schedule to 14, you’ve done a terrific job. So based on that we did a really good job in the trenches.”

Led by the sophomore roommates, the Crimson’s rushing attack dominated by breaking out for a number of long gains. Harvard tacked on 266 rushing yards on 40 carries, good for 6.7 yards per attempt.

“The o-line today was really moving the line of scrimmage,” Shampklin said. “They do the work that doesn’t really get congratulated on. All of my runs were because of the o-line moving and getting up to the linebackers, making it easier for me.”

One of those long runs in particular shows off the o-line’s impact on Saturday. As the Crimson lined up at the visitors’ 23-yard line, Jake Smith handed the ball off to Shampklin, who entered the play from the quarterback’s left side.

Shampklin then stopped in his tracks and cut up the middle, where a gigantic hole had formed. On the left, senior linemen Larry Allen and Tim O’Brien paired up to wall off two Toreros defenders, and junior tight end John Stivers cut in behind the line to fortify the right side along with junior lineman Liam Shanahan. The end result was a one-on-one matchup between Shampklin and San Diego safety Daniel Tolbert, which Shampklin won with ease and broke free untouched en route to his second touchdown.

Though the Toreros lost the rushing battle, comparing the two teams’ passing attacks must have been more difficult for anyone sitting in the stands. Looking at the results on paper, however, shows that Harvard came out on top in this arena as well.

San Diego outgained the Crimson in the air, 298 yards to 195, but the Crimson was more efficient. Smith completed 13-of-21 passes, while the Toreros’ Anthony Lawrence was 23-for-46 and tossed an interception.

Throughout the game, Lawrence showed flashes of his standing as a top FCS signal caller, especially when targeting Michael Bandy (12 catches, 202 yards). However, he was forced into attempting many low-percentage throws due to the pressure imposed by Harvard’s front seven. By the final whistle, Lawrence had been hurried 14 times. For comparison, Smith was hurried just twice.

The Crimson also stood its ground when it mattered, as San Diego finished just 4-of-18 on third and fourth down conversion attempts.

For whatever reason, Harvard has dominated historically in the early portion of its season. Going all the way back to 2001, the Crimson has won its past 18 home openers. In the first game of the season, regardless of location, the team is 15-3 in the past 18 years. Throughout program history, the team has maintained this record of success almost exactly with a 119-24-2 record, good for a .828 winning percentage.

Not only did Harvard kick off its season with a bang, but it also began the game with a dizzying first quarter replete with four touchdowns. San Diego hit a field goal with 11:32 left in the quarter to open the scoring. Twenty seconds of game time later, the Crimson had erased that lead. On the second play from scrimmage, Shampklin sprinted 64 yards to find the end zone, and he would repeat that action twice more in the quarter.

Interestingly, 2013 was the last year in which the Crimson matched up against San Diego. In the first week of that season, Harvard traveled to California and won, 42-20, to open a season in which it finished 9-1 and won the Ivy League Championship.

The Ivy League is steeped in tradition, but slowly the confe rence continues to adopt rule changes that bring it up to speed with other major collegiate conferences and professional leagues. Though the Harvard football team still will not be able to qualify for the FCS Championship, it will see replay review used in its games.

On Saturday, the new policy made an appearance early on. With 5:45 remaining in the first quarter, the Crimson began a drive at its own 10-yard line and quickly advanced to the San Diego three-yard line with 45 yards on four carries from Darrington and a 42-yard pass caught by senior wideout Justice Shelton-Mosley mixed in.

On Darrington’s fifth carry of the drive, the sophomore dove toward the goal line and barely snuck the ball across the plane. Replay staff walked onto the field, and the score was quickly confirmed by an official.

“The bottom line is it’s good for football,” Murphy said. “There’s an opportunity to make it right, and I think that’s a good thing.”