Tensions and Tenure: Elizabeth Warren at the Law School

Massachusetts Senator Elizabeth A. Warren came up for tenure at Harvard Law School in 1993, and her review proved a flashpoint in the ongoing discussion about gender at the school.
By Idil Tuysuzoglu 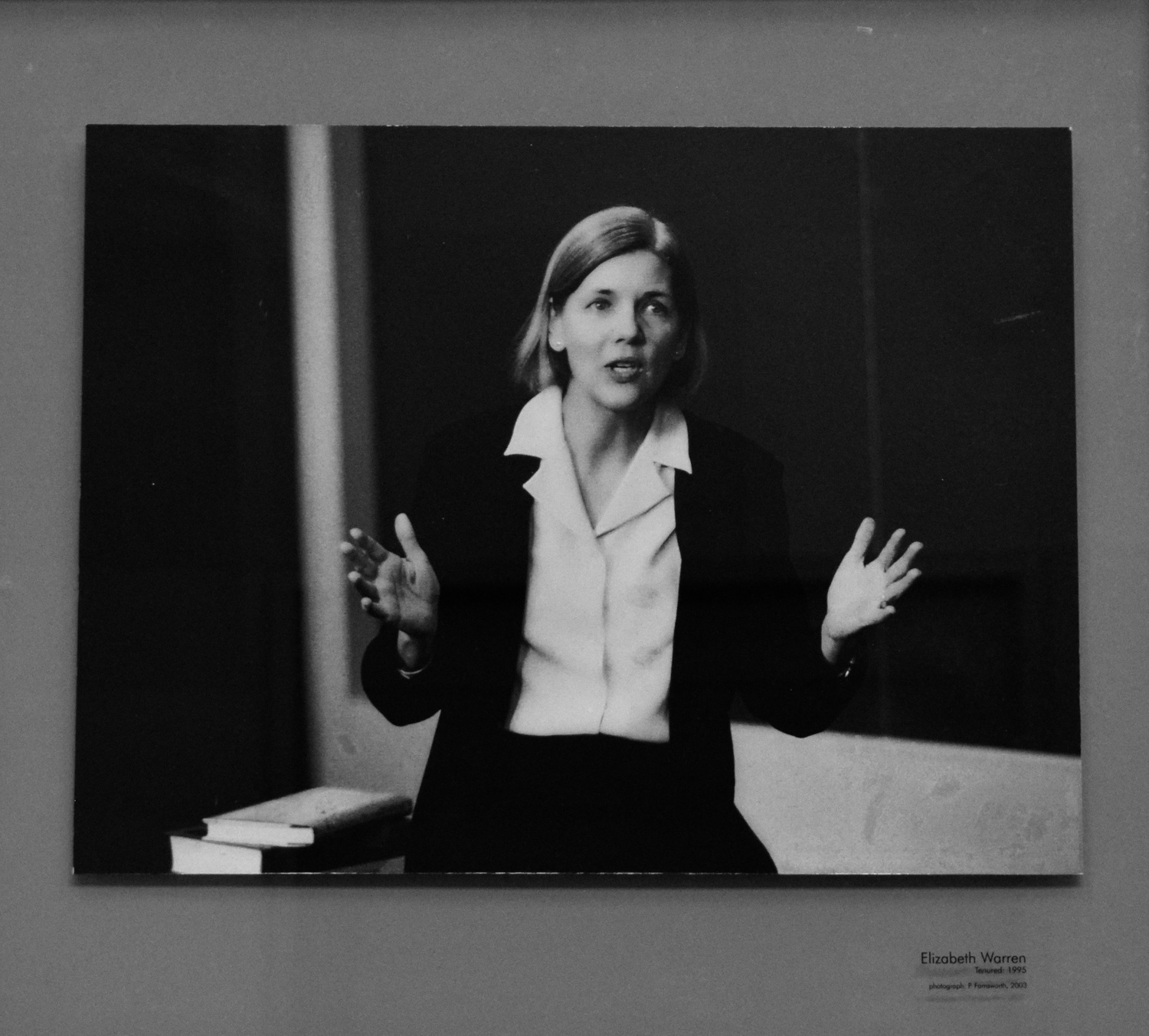 The document featured a parody entitled “He-Manifesto of Post-Mortem Legal Feminism,” which mocked the late Northeastern Law Professor Mary Joe Frug, who just one year prior was brutally murdered on Brattle St. The pamphlet characterized her as a “humorless, sex-starved mediocrity,” and dubbed her the “Rigor-Mortis Professor of Law,” according to The New York Times’ coverage of the event.

“It had one part of the pamphlet attack her. I mean, there were things that were just outrageous and misogynist,” said John C. Bonifaz, a 1992 Law School graduate. “And it was created by Harvard Law students, students on the Harvard Law Review, and distributed at the dinner, and that caused a significant uproar on the campus.”

The incident at the banquet was just one event adding to growing campus disapproval of the law school and the gender composition of its faculty. Students had sued the university in the fall of 1990, alleging that the Law School participated in discriminatory hiring practices.

A few years later, in 1993, Massachusetts Senator Elizabeth A. Warren—then a visiting law professor from the University of Pennsylvania—would be up for tenure at a school that had just five female tenured faculty members out of more than 50 total faculty. Her review proved a flashpoint in the ongoing discussion about gender at the Law School.

A LACK OF DIVERSITY

Harvard Law School in the early '90s was rife with frustration about the lack of diversity at the school. Statistics about the makeup of the faculty propelled some students to boycott classes and storm the office of then-Law School Dean Robert C. Clark.

Inger D. Tudor ’87, a law student at the time, said Clark was unreceptive to the activists’ demands.

“He was very inflexible and he operated from a place of ‘I am right. I have right behind me,’” she said.

“And when we looked at places like Georgetown Law and elsewhere where they had much more diverse faculties, we did not see that as a credible response,” he added.

Tudor also said she felt some law professors at the time did not make much of a conscious effort to interact with and learn from those of different backgrounds.

“What you had were people who, if they didn't necessarily in their daily life ... have to interact with people of color or women, they did not go out of their way to do that,” she said. “I don't necessarily think there was a conscious intent to not do it, but because it was something they didn't have to do, there was no conscious intent to try and broaden their horizon.”

Some faculty, though, had also begun to criticize a lack of diversity at the Law School. Twenty of the 59 tenured Law School professors at the time signed two letters arguing the school had created a “hostile environment” by neglecting to hire a more diverse faculty.

Bonifaz said these ongoing discussions and tensions over diversity at the Law School were ever-present in the minds of students as Warren came up for tenure.

Warren, a visiting professor from the University of Pennsylvania, taught courses on bankruptcy and commercial law and was “very popular with students,” according to a 1995 article published in The Crimson.

“She was very lively, engaged the class to a great extent,” said William Anspach, a former student of Warren’s and a 1993 graduate of the Law School.

Some Law School students so adored Warren—and were so passionate about increasing faculty diversity at the school—that they wound up holding two separate vigils to support Warren's possible tenure.

The first vigil came in Dec. 1992, when students gathered silently outside Pound Hall to advocate for the tenuring of one of two female visiting professors at the time—Warren and another woman who then taught at Yale. The students knew one of the women was up for a tenure vote, but they were not certain which one.

Despite the uncertainty, around 60 students attended, some holding fluorescent-colored posters bearing slogans including “Diversity Now” and “Good Enough for the Cabinet but not for HLS,” according to a 1992 Crimson article. Seven different student groups, including the Coalition for Civil Rights, the Asian-American Law Association and the Women's Law Association, helped organize the vigil.

Warren, however, was not the subject of the Dec. 1992 vote; she instead came up for a tenure vote roughly two months later in Feb. 1993. Students again organized a vigil outside Pound Hall and eagerly awaited the result.

Law Professor Laurence H. Tribe wrote in an email that most of the faculty participating in the 1993 vote supported Warren’s bid for tenure.

“The only reason there was any controversy at all was that one elderly and well-established bankruptcy scholar at the law school was planning to retire before long and didn’t see her filling his shoes, so he prevented her from winning unanimous acclaim, although of course she did win the supermajority required for tenure,” Tribe wrote.

“The only ‘diversity’ issue I recall coming up was that it would be great to add a brilliant, energetic woman to a faculty that was so uniformly male at the time,” he added.

Warren was ultimately granted tenure by the close of that night in Feb. 1993. But she decided not to take up the position until 1995, citing “family reasons.”

In the three years since the night of the vigil, the number of tenured female faculty members at the Law School had more than doubled.

By late 1996, out of the 71 total law professors, 11 were women, according to a Crimson article. In addition, five were black, one was Native American, and one was Hispanic.

school had doubled the number of women on the faculty and hired the first woman of color. So you can't prove causality, you know, if these efforts make a difference or not,” said Jeff M. Lubell ’90, a law student at the time. “I was encouraged at that time that progress had been made.”

In the years since, the Law School has taken further steps to promote diversity.

The registrar’s office now tries to assign students to at least one class taught by a female faculty member during their first year, and the number of female faculty had increased to 28 tenured and tenure-track female professors, according to the 2018 Law School faculty directory.

“The facts will speak for themselves about the extent to which the faculty has become more diverse,” Lubell said.

A previous version of this article appeared to conflate two separate vigils students held to support what they thought were Senator Elizabeth Warren's bids for tenure in late 1992 and early 1993. The article has been updated to clarify that, though students held vigils in both Dec. 1992 and Feb. 1993 (and both times believed Warren might be up for tenure), Warren only came up for a tenure vote in 1993.