On June 12, 1968, Coretta Scott King addressed a campus disillusioned by the draft and a spate of political violence.
By Devin B. Srivastava 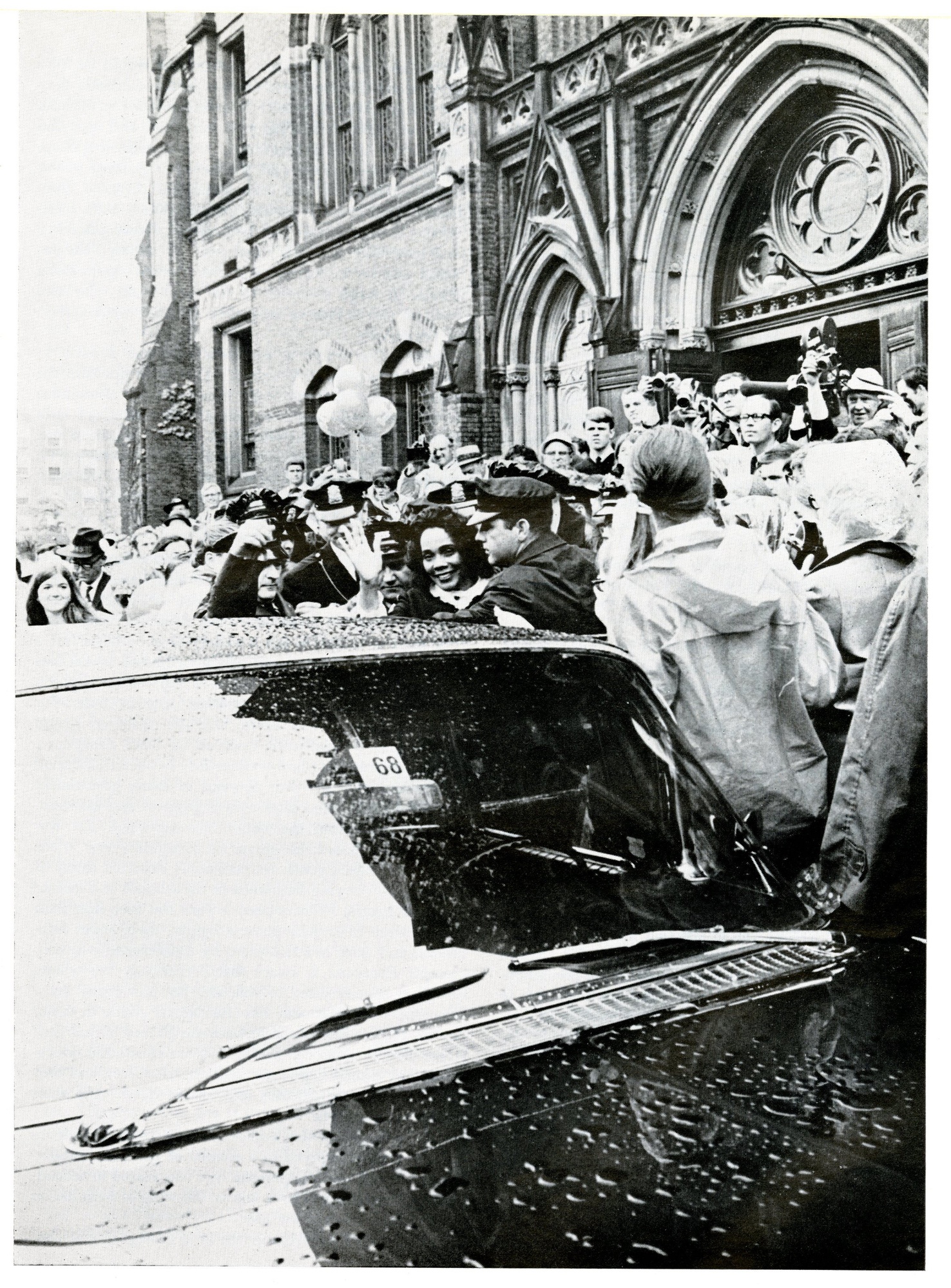 Coretta Scott King enters a car amidst throngs of press and students outside of Memorial Hall following her address to the Class of 1968.

On a rainy day in early June 1968, thousands of spectators crammed into Sanders Theater for the annual Class Day speech. Recently widowed Coretta Scott King stood on the stage, ready to address the graduates. The crowd overflowed into Memorial Hall. The next day’s issue of The Crimson featured a photograph of Scott King on the front page, beaming and holding a bouquet of roses.

Coretta Scott King has not originally planned to occupy that stage. Members of the senior class had chosen her husband, Martin Luther King Jr., to speak at the event, and he had accepted the invitation. But just two months before Class Day, Martin Luther King Jr. was assassinated in Memphis, Tenn., where he had been preparing to march on behalf of striking Memphis sanitation workers.

Coretta Scott King took the stage at a fraught political moment. People across the country were reeling after her husband’s death. The war in Vietnam was in full swing. A fierce presidential race was underway, complicated by the assassination of Robert F. Kennedy ’48, which happened shortly before Coretta Scott King addressed the Class of 1968. 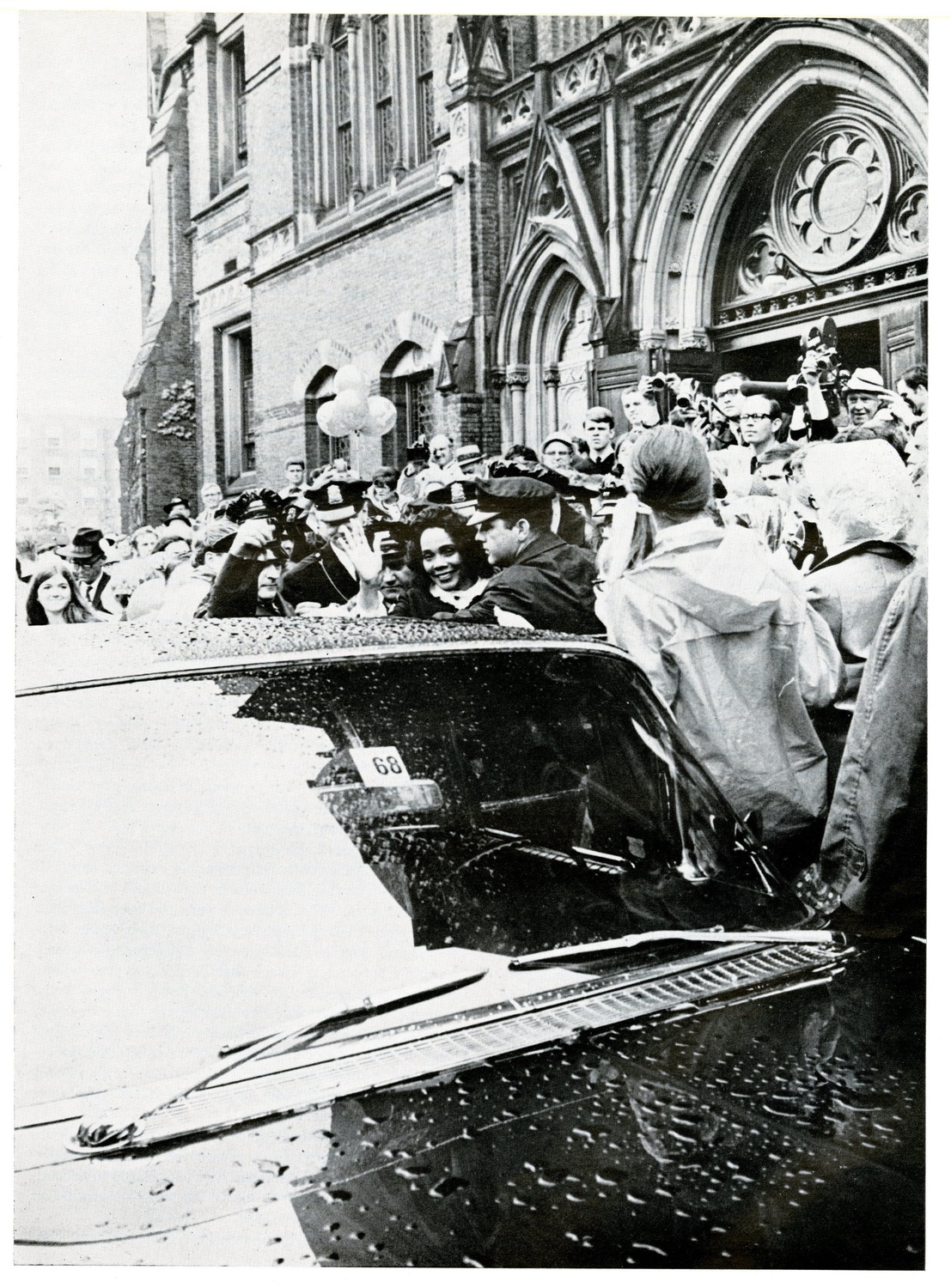 By Courtesy of Harvard Magazine

Harvard, like many other college campuses, was a hub of political activism in the late ’60s, with sit-ins and marches dominating headlines in The Crimson. On June 12, 1968, Coretta Scott King addressed a campus disillusioned by the draft and a spate of political violence.

Thomas P. Southwick ’71, one of many Crimson editors who covered the race activism after Martin Luther King Jr.’s death, said these assassinations “were probably as much as a shock and an awakening and a disillusionment as Pearl Harbor was for my father's generation.”

“We believed in Harvard as a force for good in an institution that advanced good causes. And I think a lot of our illusions were shattered that spring,” he added. “We knew it was significant, we knew it was making history, and we knew the eyes of the world were upon us.”

Before 1968, Class Day was reserved for skits and orations from speakers chosen by administrators. The Class of 1968 was the first to select its speaker. The handful of seniors who selected Martin Luther King Jr. sought an orator who would address “questions of war and peace” and “to dramatize the singularity of a year in which many seniors face immediate induction,” according to the announcement published in The Crimson.

Martin Luther King Jr. was slated to speak about “Asian conflict and urban crisis," in the words of the Class Committee. When the committee confirmed his widow to speak in his place, The Crimson reported that “Mrs. King's remarks may be brief, and the Committee may change its plans for the speech.”

Class Day would not have been the first time Martin Luther King Jr. had spoken at Harvard; He was a guest preacher at Harvard’s Memorial Church during the 1959-1960 academic year and delivered a lecture at Harvard Law School in 1962.

One of his more high-profile visits to Harvard fell during January 1965, just months after he received the Nobel Peace Prize, when among other things, he “declared that Negroes must turn to political action, as well as demonstrations, in the fight for racial justice,” The Crimson reported.

And April 1968 was not the first time Coretta Scott King spoke for her husband. She was quoted in The Crimson saying, “Whenever it was impossible for my husband to be in a place where he wanted to be and felt he needed to be, he occasionally sent me to stand in for him.”

“If our generation in general, and the movement in particular, have to be described in a word or two, I would call them not a nihilistic generation but above all else a moral generation,” Norr said. “In this time of perpetual crisis and recurrent tragedy, a desperately moral generation.”

The guest of honor spoke on similar themes.

“In a power-drunk world, where means become ends, and violence becomes a favorite pastime, we are swiftly moving toward self-annihilation,” Coretta Scott King said to the crowd of soon-to-be graduates before her. “Your generation must speak out with righteous indignation against the forces which are seeking to destroy us.”

She lauded the spirit of political advocacy at Harvard and other campuses, and encouraged the students to recognize their own political power.

“Today’s student is now recognized as a significant political actor with amazing power to influence the course of societies all over the world,” she said. “I am a religious person in the most unqualified sense of the word but I will say emphatically that there is more moral vitality and honest searching for values of life animating the campuses today than can be found in our churches.”

On May 24 of this year, the day before Commencement, Nigerian author Chimamanda Ngozi Adichie will address the Class of 2018. Members of the Class of 1968 will also be on campus, celebrating their 50th reunion.

Jerry G. Nelluvelil ’18, a senior class marshal and co-chair of the committee that selected the speaker, said Adichie’s selection was partially “in response to last year it being two white men–the Commencement and Class Day speakers–and just understanding that because this is a ‘momentous’ occasion, wanting to be able to honor the memory of what happened 50 years ago.”

Adichie is best known for her novel, “Americanah” and a TED talk called “We Should All Be Feminists.” Nelluvelil said her work contributes the “conversation of race, gender—all sorts of intersectionality becoming more of a global discussion.”

“When Coretta Scott King was speaking, it was an incredibly intense moment for our national history,” he said. “Adichie helps us see that we shouldn’t just see how the world is but what we want the world to be. From Coretta’s time to now, some things have definitely changed, but there are a lot of other things that still need to be done, and I think that one of those things is in the realm of gender equality.”