The faculty survey revealed that the vast majority of respondents identify as “liberal” or “very liberal,” and that a similarly large majority of FAS voted for Hillary Clinton in 2016.
By Lucy Wang, Luke W. Xu, Brian P. Yu, and Phelan Yu 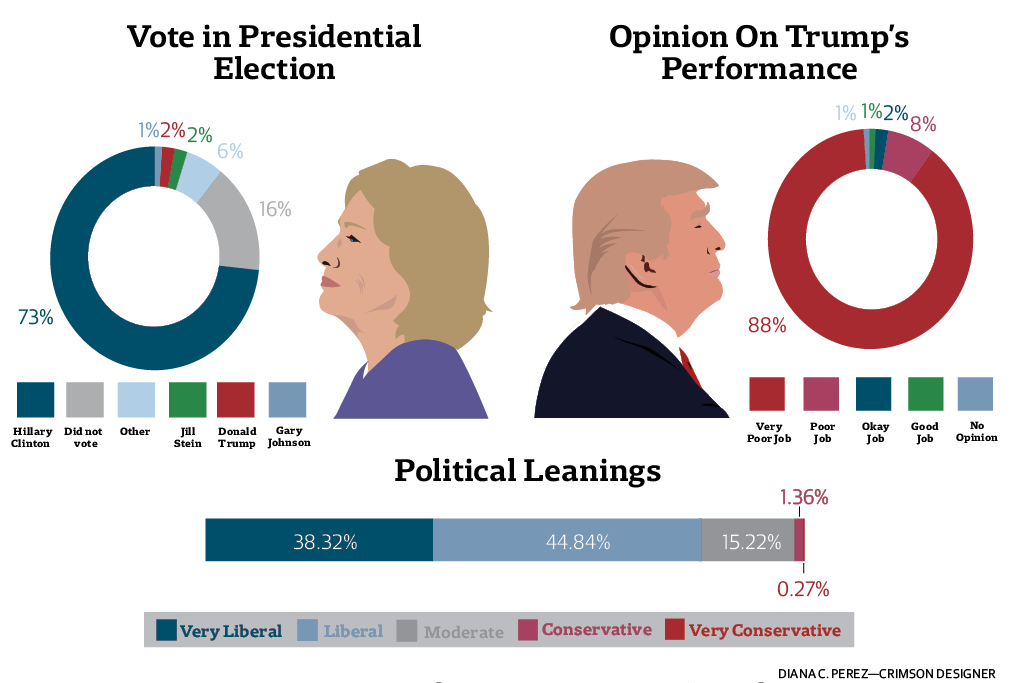 An overwhelming majority of surveyed members of the Harvard Faculty of Arts and Sciences—88 percent—believe that President Donald Trump’s job performance to date has been “very poor,” according to a survey conducted by The Crimson.

The faculty survey also revealed that the vast majority of respondents identify as “liberal” or “very liberal,” and a similarly large majority voted for Hillary Clinton in the 2016 presidential election.

The Crimson conducted a survey of Harvard’s flagship faculty over the course of two weeks in mid-April 2018. The results paint a picture of how the more than 1,000 members of FAS think about key University policies, life at Harvard, the national political climate, and pressing issues of sexual harassment both on campus and nationwide.

The 54-question survey garnered roughly 500 responses, representing more than 43 percent of the Faculty, though not all respondents answered each question. The anonymous survey, emailed to nearly every member of the FAS, was open from April 17 to April 30. The Crimson did not adjust the data for possible selection bias.

The 2016 presidential election saw a large shift in the political climate nationwide, spurring controversy, shock, and debate on Harvard’s historically left-leaning campus. The second installment of The Crimson’s faculty survey series delves into the political and activist tendencies and beliefs of Harvard professors.

Some Harvard faculty members had a visceral reaction to Trump’s surprise win in the Nov. 2016 presidential election; certain professors canceled exams and others warned of instability in the political system. Two months later, a growing number of faculty vowed to speak out against Trump’s policies.

Two years later, not much has changed, according to the results of the survey.

No respondent indicated they believe Trump has done a “very good” job.

These numbers appear to match with how respondents voted in the 2016 presidential election. Of the survey-takers, 73 percent reported for Hillary Clinton, while just 2 percent reported voting for Trump. Only 2 percent indicated they voted for Jill E. Stein ’72-’73.

The remaining 25 percent of respondents indicated they either voted for Gary Johnson, wrote in the name of the candidate, or did not vote at all.

The Crimson’s survey also asked faculty about their politics, allowing respondents to select label ranging from “very conservative” to “moderate” to “very liberal.”

These percentages are consistent with the long-running popular perception that FAS is liberal-dominated.

Conservative detractors have at times called Harvard “the Kremlin on the Charles,” a label applied to both students and faculty. The politics of Harvard’s professors—falling left of center—have sparked concerns over what some call a lack of ideological diversity and the impacts this may have on teaching, undergraduate life, and research.

A 2015 Crimson analysis of FEC filings showed that 96 percent of donations from FAS affiliates to federal campaigns and political action committees went towards Democratic groups.

For some FAS affiliates, Trump’s election meant new or increased commitment to activism, according to the survey.

Harvard’s faculty have historically remained mainly on the sidelines of political protests. But the action-packed events of the past two years—ranging from the 2016 dining workers’ strike to the 2017 Women’s March to protests against Trump’s travel bans—may have changed that.

A majority of survey respondents—59 percent—reported they had engaged in a protest at least once since Trump was elected president. On the other hand, 37 percent indicated they had not done so and 4 percent reported they preferred not to answer the question.

Faculty desire to protest appeared to fall along political lines.

No respondents who reported voting for Trump or Johnson indicated the same.

Across the past year or two, faculty have chosen to engage in activism in a number of ways—ranging from petitions to special lectures to protests. Once, faculty activism even led to a jail cell.

In Sept. 2017, 31 professors from Harvard and other Boston-area universities were arrested during a demonstration meant to protest Trump’s decision to rescind DACA, an Obama-era program that gave legal protections to young undocumented immigrants.

When Trump released his proposed budget for 2018 in March 2017, faculty and University officials swiftly decried the proposal as “devastating” and “unprecedented.” Since the election, professors had openly worried Trump would decrease funding for federal programs key to Harvard research agendas—like the National Endowment for the Humanities and the National Endowment of the Arts.

More than a year later, though, survey results indicate most faculty respondents either did not know or had not seen any tangible dent in funding for their field under Trump as compared to previous administrations.

Asked if their department has seen more cuts under the Trump administration than under other administrations, 21 percent of respondents answered yes. By contrast, 33 percent answered no.

A majority of faculty respondents—56 percent—indicated they did not know whether their department has received greater cuts to federal research funding under Trump. A Crimson analysis of the data revealed no statistically significant correlation between answers to this question and respondents’ self-identified academic divisions.

At the April iteration of the monthly Faculty meeting, University President Drew G. Faust said the latest federal budget bill had “favorable” results for Harvard’s research “in science and beyond.” The bill included an 8.8 percent increase in funding allotted to the National Institutes of Health and a 16 percent increase in funding allotted to scientific research conducted by the Department of Energy. In total, 71 percent of all federal funding Harvard received in fiscal year 2017 came from the NIH, according to the University’s annual financial administration report.

The NEH and the NEA each saw a $2 million increase under the bill.

The Harvard Crimson collected electronic responses through the Qualtrics survey platform from April 17 to April 30, 2018. A link to the anonymous survey was sent to 1,173 FAS and SEAS faculty members through emails sourced from Harvard directory information and departmental websites.

Of those faculty who received emails, 516 accessed the link to the survey. A total of 498 participants answered at least one question, and 296 participants completed every question in the survey. To prevent participants from accidentally taking the survey more than once, The Crimson enabled Qualtrics’ browser cookie functionality to register unique survey sessions on each device. This device data is controlled by Qualtrics, and The Crimson does not retain information that could identify devices accessing the survey with anonymous responses.

Reweighting all responses by ladder status and divisional affiliation—the two demographic categories which saw the most significant areas of response discrepancy—did not produce any changes greater than plus or minus 1 percent from the unadjusted percentages reported in the main body of the story.

Separately adjusting by gender yielded no changes greater than plus or minus 0.8 percent to the percentages reported in this story.

Editor's Note: This article has been updated to include a Methodology section discussing The Crimson's data-gathering procedures as well as the paper's understanding of the collected data, including corrections to the raw data made using publicly available information regarding the demographics of the Faculty of Arts and Sciences.