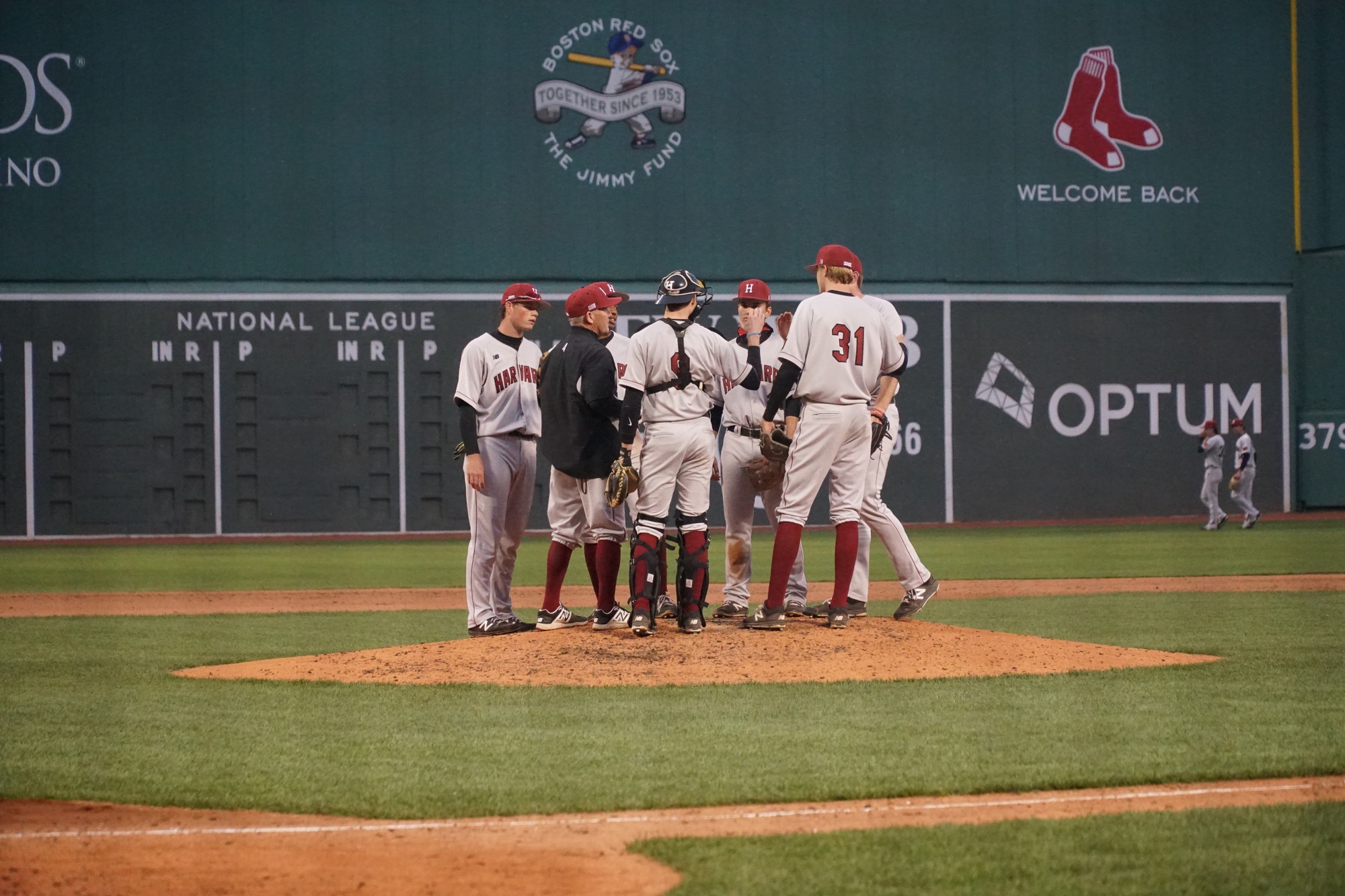 The infielders and coach of the Harvard baseball team gather at the pitcher’s mound during last year’s Beanpot series By Ryosuke Takashima
By Stephen J. Gleason, Crimson Staff Writer

The Harvard baseball team made the trip out to Las Cruces, N.M., for a four-game series with New Mexico State this weekend. Despite a blowout loss to the Aggies (8-4) on Sunday, the Crimson (2-6) was able to split a doubleheader on Saturday, losing on a walk-off in the first game before a three-run ninth inning lifted the visitors to victory in the nightcap.

Junior centerfielder Ben Skinner and sophomore shortstop Chad Minato led the way for the Harvard offense, combining for 10 hits and 11 runs batted in while junior right-hander Kevin Stone picked up the team’s lone victory on the mound.

“I thought we showed a lot of fight this weekend,” Skinner said. “I think we definitely showed that we’re a team that’s going to have the ability to win ball games late and come back and rally, which is something that we haven’t really had my first two years so we’re definitely looking forward for that.”

New Mexico State ended the weekend with a bang, tagging five Crimson pitchers for 23 runs on 17 hits in a shortened contest. The Aggies exploded for 13 runs in the bottom of the sixth innings and hit five home runs. Sophomore shortstop Joey Ortiz and junior right fielder Logan Ehnes each went deep and drove in five runs.

“I think we were a little bit tired today, it’s been a bit of a long weekend, but again we’ll be experiencing that down the road in the Ivy League so it’s not a great excuse, something that we’ll have to improve on,” Skinner said. “Things got a little bit out of hand, but we’re certainly not hitting the panic button over here or anything. Flush that one, forget about it, and move on.”

Freshman Chris McGrory and sophomore JT Bernard did not retire any of the 11 batters that they faced, allowing six earned runs in the process. The 23 runs allowed are the most during Harvard head coach Bill Decker’s five years at the helm. Sophomores Hunter Bigge and Jake Suddleson were bright spots for the Crimson on Sunday as the pair accounted for the ball club’s only two home runs of the weekend.

Despite being competitive for most of the weekend’s first two contests, Harvard did not pick up its first victory of the trip until Saturday evening. Stone was a workhorse and picked up the win, throwing 115 pitches over eight innings. Despite walking five batters and conceding three runs in the fifth inning, the Stamford, Conn., native was a steady hand for the Crimson, especially late in the game. Stone surrendered just one hit in his final three innings of work and was in line for the win after Harvard posted a three-run ninth inning.

“It’s great to gain that experience early on,” Skinner said. “Obviously when games come down to the wire in the Ivy League, which they do a lot, it’s nice to be able to look back and say that we’ve been in that position before. It was a lot of fun to come out on top in that second game and I think that we’ll hopefully carry that momentum into spring break.”

Harvard regained the lead in that frame after Minato and Skinner both singled to drive home a trio of Crimson baserunners. New Mexico State made it interesting in the bottom half of the frame but Bigge struck out redshirt junior third baseman Caleb Henderson to strand two baserunners.

Redshirt senior Mason Fishback hit a walk-off two-run home run as the Aggies took the front end of Saturday’s doubleheader. Fishback knocked senior right-hander Garrett Rupp’s 2-0 offering over the fence to cap off a game that Harvard led entering the bottom half of the ninth inning. After the Crimson attained a 7-5 advantage after its sixth at-bat, the hosts jumped back on top with one run in the sixth and two more an inning later. Skinner singled home senior Austin Black and Bigge but a single with one out in the bottom of the ninth by New Mexico State senior David Bellamy sent the game into extras. Skinner and Minato each drove in three runs for Harvard.

“I think we just hung in there,” Minato said. “We had some tough innings, but in both of those games, we were able to bounce back pretty late in the game and find our swings, find our rhythm against their pitchers. That was pretty good for us. I think we could be a little more consistent early on and especially in the middle of games, but on the back end, we’re definitely good in that aspect.”

A six-run bottom of the eighth inning propelled the Aggies to the victory on Friday afternoon. After jumping out to a 5-0 lead off of Harvard starter Noah Zavolas, New Mexico State allowed the Crimson to tie the game after hanging a four-spot in the first half of the eighth. However, a Trey Stine grand slam capped off the decisive inning for the hosts as Harvard freshman Buddy Hayward was tagged with the loss after conceding the six runs.

“I think it’d be nice to see everybody kind of relax,” Minato said. “I think having two weekends under our belt, that will help guys kind of relax and just pitch, not be so tense and try to force strikes but just try to [pitch to] contact.”

Stine and Fishback combined to drive in eight of the Aggies’ 11 runs. Hayward had three hits for the Crimson as the team’s designated hitter but his teammates were only able to muster five hits outside of its big eighth inning.