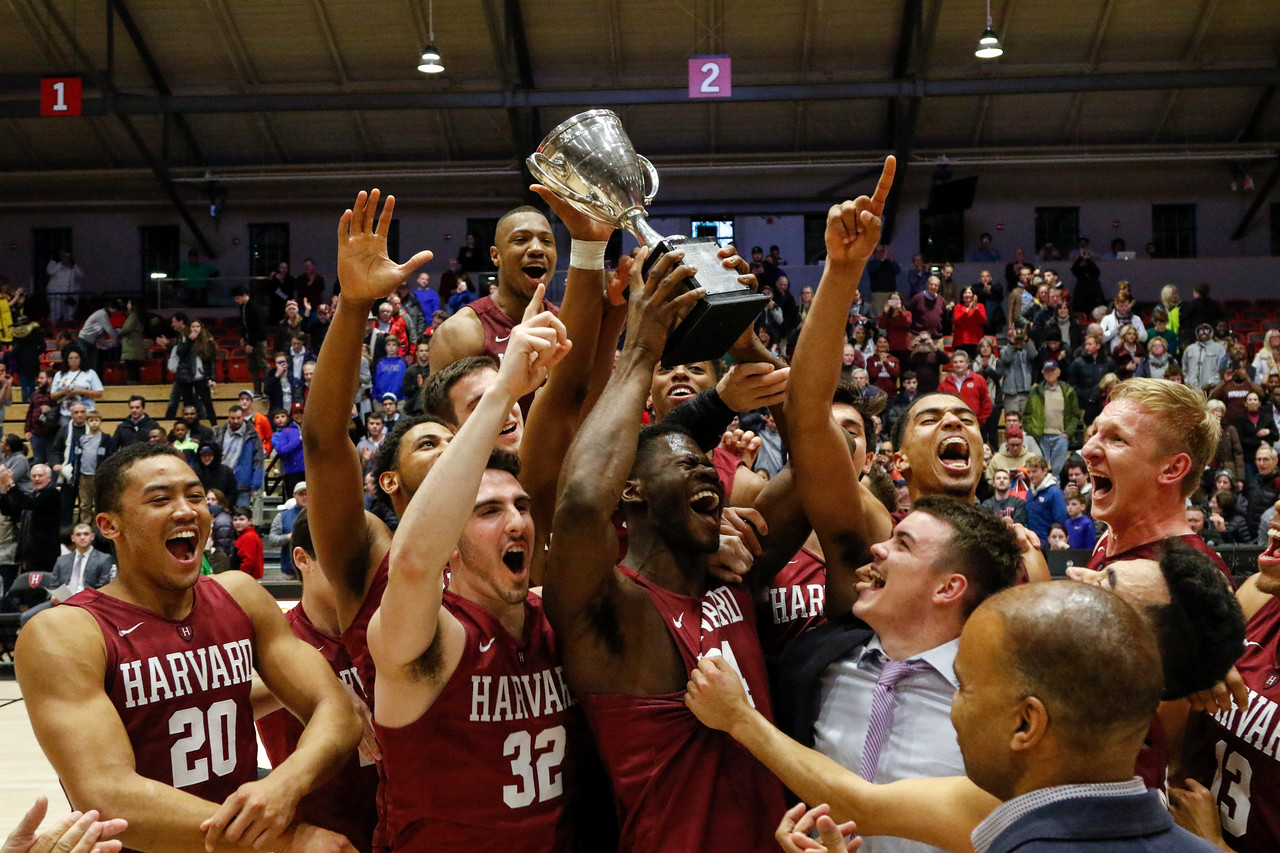 Harvard head coach Tommy Amaker has always been partial to the phrase, “our conference is won on Saturday nights.”

Playing against Columbia with the conference title on the line, Amaker’s words rang truer than ever.

Behind a season-high 63 percent shooting from the field and 61 percent shooting from three, the Crimson (17-12, 12-2 Ivy) handed the visiting Lions (8-19, 5-9) a 93-74 loss at Lavietes Pavilion. The win gave Amaker his sixth conference title since arriving in Cambridge and assures Harvard the No. 1 seed heading into next weekend’s Ivy League tournament.

“I’m really proud of the journey this team has been on, to close it out here at home,” Amaker said. “You don’t get many chances to come around like that, with Senior Night at home, for the Ivy League Championship, to play for it like that. We can call ourselves Ivy League Champions and we can put a banner up.”

Though Saturday’s contest began with the Crimson leading by as many as 17 in the first half and ended with a lead as high 25 late in the second, a 13-0 run from Columbia between the first and second frames put the Harvard lead at just seven one minute into the second half.

Much like it had in the first half—the Crimson began the night shooting a blistering 9-of-13 through the first sixteen minutes of play—Harvard stormed back by shooting lights out. Over a six-minute stretch from the 17:13 mark to 11:10, the Crimson went on a 17-6 run to give itself a 20-point lead.

“We shoot the ball very well as a team, we have a lot of weapons especially from beyond the arc and so like every game one person can go off and hit open shots, Seth can do it, Bassey can do it, Juzang,” Johnson said. “Tonight, they left me open so I hit a couple big shots but I owe it all to my teammates to find me when I’m open.”

Starting its three seniors to close out their careers at Lavietes, the Crimson struggled to miss a shot through the first thirteen minutes of play.

Harvard began its scoring with a put-back dunk courtesy of captain Chris Egi just over a minute in—from there it wouldn’t look back. Behind the red-hot shooting from beyond the arc and some of the best ball movement that it has seen all season, the Crimson jumped out to a 35-18 lead with 7:16 still to play before intermission.

“We were certainly shooting the ball very well, look at our shooting percentages,” Amaker said. “We only went to the line two times and had 14 turnovers, but shooting 17 threes, I thought was incredible. In the first half, that got us out of the blocks. I thought we scored and got a lot of confidence. We played in transition, we played with great pace.”

Though the Lions mounted a late 9-0 run and pressed the Crimson in the dwindling minutes of the contest, the early stretch gave Harvard the early lead and one that it would hold onto the rest of the way. The Crimson tallied a season-high 24 assists and for the second night in a row saw four players in double digits. In what was likely Harvard’s best all-around effort, seven Crimson players scored six or more points on Saturday night.

On a senior night that saw Harvard’s first bucket scored by an outgoing senior, the last shot also came fittingly from a fourth-year. With the game decided, Amaker checked in his three veterans with just over a minute to go. As the shot clock wound down late in the contest, senior guard Andre Chatfield buried one from deep to the joy of the 1,636 in attendance. On the Crimson’s last possession, sophomore guard Christian Juzang handed the ball off to Egi to allow the captain to dribble out the clock and cap off the conference title.

The three seniors were freshmen the last time that Harvard took home the Ivy League crown.

“Coach always says that this league is won on Saturday nights, so we had an opportunity ahead of us,” Egi said. “I guess it was one of those things, like when you have a chance to win a championship, it doesn’t matter what you did the night before. I know all the guys on this team, everybody wanted to win and I think that’s just what drove us today.”