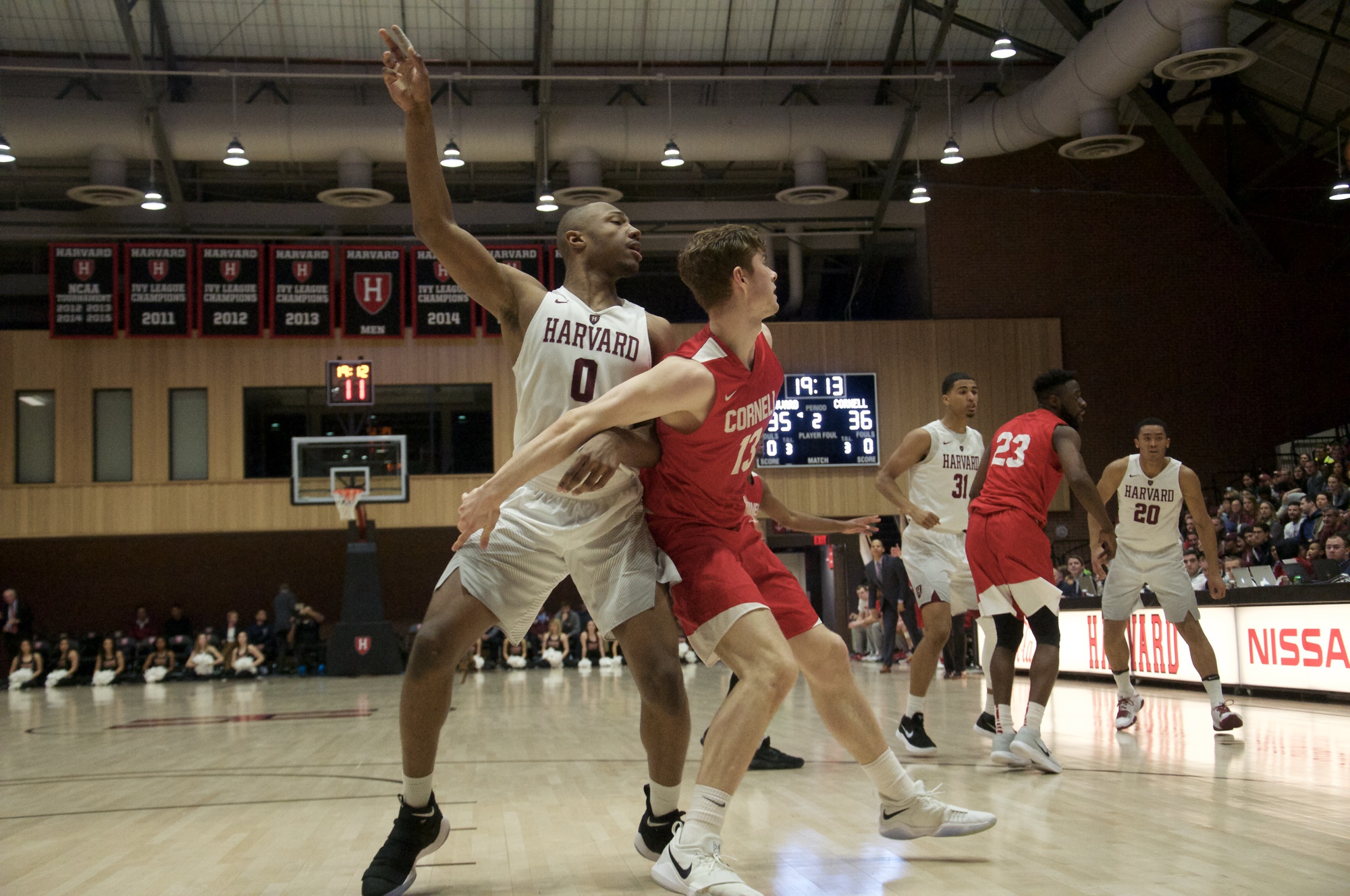 Sometimes the third time really is the charm. It took double overtime, but the Harvard men’s basketball team was able to top Cornell, 98-88, on Friday night at Lavietes Pavilion. With the Crimson’s win and Penn’s loss at Yale, Harvard (16-12, 11-2 Ivy League) will have the opportunity to secure the Ivy League’s regular season title and the top seed in next weekend’s conference tournament with a win over Columbia on Saturday night. The Big Red (11-15, 5-8) will need to beat Dartmouth tomorrow and have Columbia and Princeton both lose to live to see another weekend. It was the Crimson’s first double-overtime game since December of 2014 and the first at Lavietes since February of 2013.

“We both had chances I though to win the game at various points, whether it’s regulation, whether it’s the first overtime, free throws, or what have you,” Harvard coach Tommy Amaker said. “Just a gusty win by our team to be able to hold the home serve.”

With the clock counting off the final 12.3 seconds of regulation, Cornell junior guard Matt Morgan, who already had 28 points on the evening, drove into the teeth of the Crimson defense, laid the basketball off of the right backboard through contact from Harvard sophomore forward Chris Lewis. The layup attempt wiggled its way through the bottom of the net, Morgan drained the ensuing free throw, and the margin between the teams was the same as it had been at tip-off.

“What we don’t want is an and-one,” Amaker said. “If you’re going to be there to challenge it or whatever then it can’t be whether the shot is going to go in and they get a chance to tie it at the foul line. You’ve got to get your money’s worth there, as they say, or you need to completely back off. It’s just a really poor decision on his part.”

Lightning struck a second time toward the end of the first overtime session. Harvard sophomore forward Seth Towns, a 79.8 percent free throw shooter entering Friday’s game, missed the front end of a pair of free throws with 5.7 seconds to play. After 45 minutes of game action, the contest was still without a victor.

The Crimson made sure to put its foot on Cornell’s throat in the second extra session, outscoring the guests, 11-1 despite Towns’ premature exit due to a fifth personal foul. Harvard would score the final nine points of the game and hold the Big Red to 0-of-6 shooting in the contest’s final five minutes. After Cornell junior forward Stone Gettings fouled out with 2:45 to play, the Crimson switched to a zone defense that helped the hosts secure stops on three consecutive possessions and pull ahead for good.

Although Lewis was the culprit for the foul that sent the game into overtime, the sophomore was a force to be reckoned with all night on the offensive end. The Alpharetta, Ga., native finished the contest with career-highs in both points (29) and minutes (41). Lewis missed just two field goal attempts all night and was a matchup nightmare for the Big Red’s undersized frontcourt.

“It was just that my team was trusting in me to carry through with my task,” Lewis said. “They said they were going to feed me the entire game and I just needed to execute the call at the end of regular period.”

One of the keys for Lewis’ career night was his ability to stay out of foul trouble, something that many of his teammates were unable to do. In the first half, Harvard committed 12 personal fouls—with Towns limited to just eight minutes before the break. Cornell was largely able to stay in the game because of the Crimson’s foul troubles. In a frame marred by stoppages, the Big Red got to the line 16 times with 13 of its 33 first half points coming from the charity stripe. Morgan, Gettings, and junior guard Jack Gordon scored all but five of Cornell’s points before the break. Harvard was buoyed by hot shooting, with five different players making a three-pointer in the first 20 minutes.

In addition to the foul troubles, the Crimson was plagued by turnovers through the game’s first three quarters. Despite shooting a scalding 58.8 percent from the field over the first 29 minutes of game action and hitting on nine of its first 15 three-point attempts, Harvard turned the ball over 16 times.

Whereas the first half was characterized by its stoppages, the beginning of the second was all about pace. The guests came out red hot out of the intermission, making six of its first eight field goal attempts, including four straight threes. Cornell scored 16 points in less than four minutes to go up by four at the second half’s first media timeout. Morgan was the catalyst, accounting for 14 of the Big Red’s first 19 second half points.

“Matt’s a really good player,” Bassey said. “I think what he doesn’t get enough credit for is he does a really good job of moving without the ball to, once he’s giving it up, he’s coming through, cutting, setting screens for other guys, causing a lot of confusion off the ball which makes it really difficult on the defense.”

With Morgan as the ringleader for Cornell, a well-rested Towns provided the answers for the Crimson. The sophomore had 10 of his club’s first 17 points out of the break as neither team held a lead of more than four for the first 10 minutes of the second half.

“It’s huge,” Amaker said. “He was carrying us for a while there when he got back in in the second half. He was the offensive punch we needed.”

Bassey—who was tasked with covering Morgan for much of the contest—also lit it up on the offensive end on a night when Harvard’s starters accounted for 92 of its 98 points. Bassey did not miss a field goal until his shot attempt at the end of regulation fell short. All told, the Denver native made four three-pointers and all six of his free throw attempts to tie a career-high with 18 points in 48 minutes of action. Bassey’s fourth triple of the game came with 6:52 remaining and gave the Crimson its largest lead of the contest at 10. Despite Harvard not committing a turnover in the final 11:03 of regulation, Morgan led the Big Red on a wild 18-8 run to send the game into overtime.

At 9:07 p.m., the Crimson clung to a one-point lead in the first overtime. While Amaker drew up a play during the timeout, the 1,636 fans in attendance erupted as the Lavietes Pavilion scoreboard flashed the final score of the Penn-Yale game. It would take another session of overtime for Harvard to be able to control its own destiny on Saturday night. But it was only fitting on another crazy night in the Ivy League.

“We’ve seen it before and I’ve mentioned that to our kids all week, how challenging, wacky, crazy, whatever you want to call it, our league can be,” Amaker said. “We’ve seen it, it’s happened to us, we’ve been on this side of how things work out.”