Men's Basketball Fights Back to Beat Princeton in Overtime 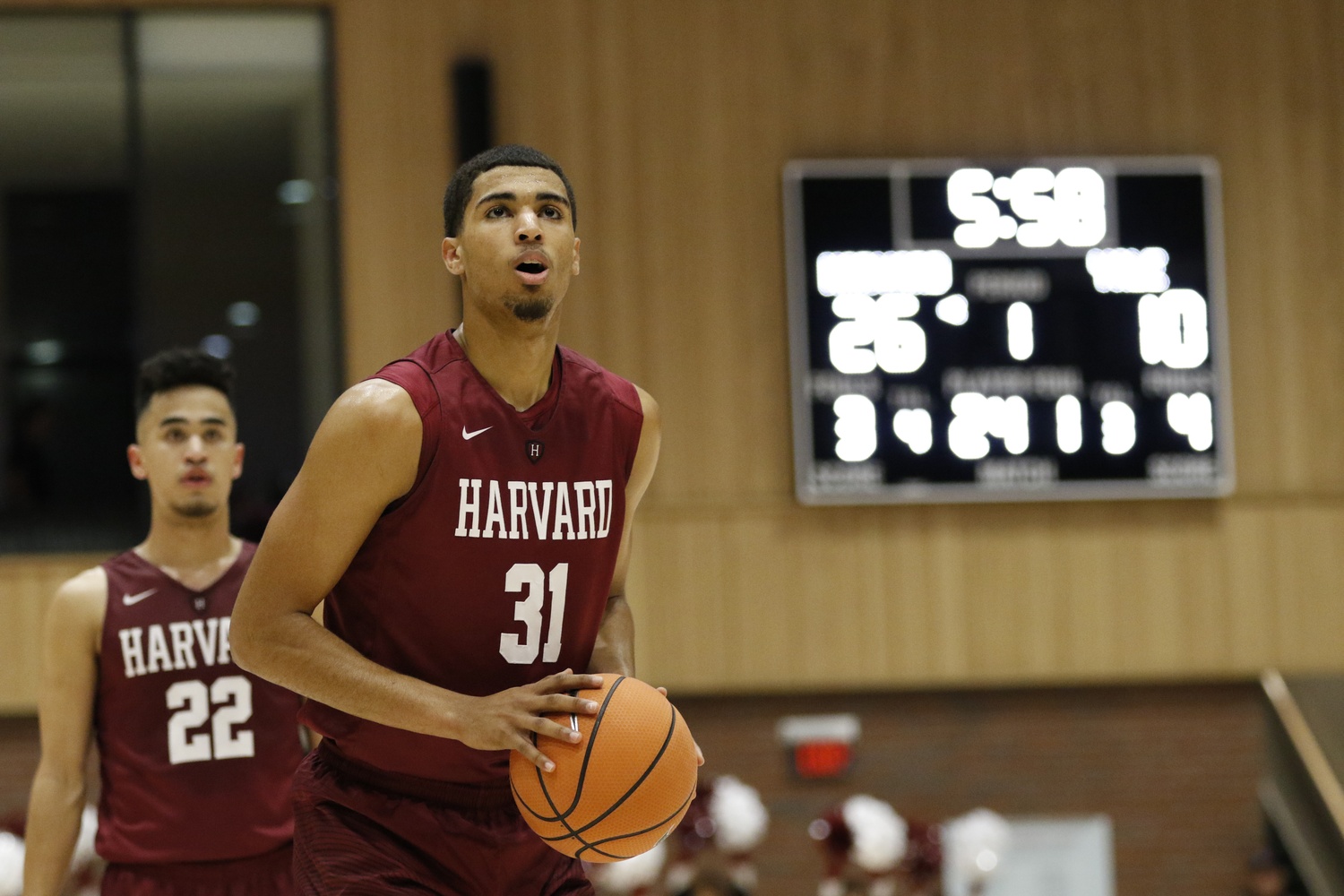 Forward Seth Towns was limited to nine points against Princeton but the sophomore did enough down the stretch to help Harvard pick up the 72-66 win. By Timothy R. O'Meara
By Stephen J. Gleason, Crimson Staff Writer

After jumping out to a 2-0 lead in the contest’s opening minute, the Crimson did not hold an advantage again until sophomore forward Chris Lewis made a layup to kick off the extra session and put his team up 62-60. Harvard (15-11, 10-1 Ivy League) would not trail the rest of the way, putting the Tigers (11-15, 3-8) to bed with a dominant final five minutes of basketball.

With just over 15 minutes to play in the contest, Princeton’s lead mushroomed to 10—the largest that it would get all evening—on a night when easy baskets were at a premium. As Lewis sat on the bench in foul trouble and classmate Seth Towns struggled to find his stroke, Harvard went on a 13-4 run over the next eight minutes to get to within one and set the stage for the game’s home stretch. A balanced offensive attack proved to be just what the doctor ordered for the guests.

“It is a difficult challenge to come back here against a really good Princeton team,” Harvard coach Tommy Amaker said. “I know they have had some struggles and they are better than their record and I think we know that. It was critical that we answered. The only way we do that is if you show some toughness and togetherness. I thought our kids did that tremendously well.”

In overtime, it was all Crimson. The guests closed the game on a 10-4 run, stymying the Tigers on both ends. Freshmen Danilo Djuricic and Mario Haskett and sophomore Henry Welsh—who replaced Lewis after he fouled out—combined for eight of those points. Not bad for a trio that entered the contest averaging a combined 3.1 points per game. Harvard made four of its six field goal attempts and four of its five tries from the charity stripe in the extra session.

“I thought they got a lot of nice minutes out of the kid Welsh,” Princeton coach Mitch Henderson said. “Djuricic made two really big shots, Haskett got to the rim. They’ve got a nice, balanced team.”

Rebounding and balance proved to be the difference as both teams extended their streaks—the Crimson has now won six in a row while the Tigers’ skid stands at seven. The strength of Princeton’s Ivy League championship team from a season ago was its balance and its experience. This year, Henderson relies on a trio of guards—senior Amir Bell and juniors Devin Cannady and Myles Stephens—for almost everything. Harvard was able to capitalize on the inexperience and physical ineptitude of Princeton’s frontcourt on Friday, outrebounding the Tigers by an egregious 38-24 margin.

“[It’s] always been for our program to play inside out and that’s obviously on both ends of the floor for us,” Amaker said. “Tremendous job from our kids on the backboard tonight.”

As it did during the first matchup with the Tigers, the Crimson received breakout performances from players not normally known for their offense. Two weeks after sophomore guard Christian Juzang reached the 20-point mark for the first time, fellow second-year Justin Bassey gave Amaker a spark, finishing with a career-high 18 points to go along with eight rebounds in 36 minutes. Djuricic and Haskett played huge roles down the stretch for Harvard as well. Djuricic connected on two key three-pointers and played the five on several occasions as Lewis battled foul trouble. Haskett tied a career-high with nine points and was a force penetrating the Princeton defense, especially in overtime.

The trio of underclassmen helped to will the Crimson on a night when it bent but did not break. Whenever it seemed that the Tigers were bound to put the game out of reach, Harvard had an answer. Princeton led by as many as eight in the first half—holding an edge of some sort for nearly 18 minutes in the frame—but the Crimson went into the locker room trailing by just three.

“At the half, we talked about how we were lucky to be in the position we were in,” Amaker said. “We were fortunate based on how we played offensively just to be down by one possession at the half. I thought that if we could continue to keep our heads up and get quality shots, we liked our chances.”

After Stephens scored 9 of Princeton’s 13 points to start the second half and put his team up nine, Harvard answered by holding the Tigers scoreless for nearly two and a half minutes. The Crimson was back within one with five minutes remaining after Towns calmly sunk three attempts from the charity stripe.

The most exciting offensive stretch of the evening began with just under four minutes to play in regulation. Bell drove through contact in the Harvard zone for two but Bassey knocked down a three the next time down. Princeton freshman forward Jerome Desrosiers brought the home crowd back to its feet and pushed the Tigers’ advantage back to three only to see Bassey drill another triple from almost the exact same spot. Bell capped the stretch the same way that he started it. His team took timeout and everyone in attendance braced for the final 2:32 of regulation.

“I thought Bassey’s back-to-back threes were critical baskets,” Amaker said. “We just got great production from different people. Rio Haskett gave us amazing minutes. Henry Welsh off the bench, Danilo off the bench, second half, I thought the difference for us was off the bench.”

The Crimson trailed by no more than six points over the final 14 minutes of regulation but did not secure a lead at all during that stretch. Despite the 13 combined points over the span of 1:17, the teams combined for just two more points (a layup by Towns with 1:27 to play) in regulation. Princeton missed four free throws in the final four minutes of regulation and bricked four more in overtime on a night when Stephens was the only Tiger who could consistently score. The junior finished with 33 of his team’s 66 points. He was an efficient 11-of-14 from the field to set a career-high while the rest of his team shot just 13-of-38.

“We obviously didn’t defend him,” Amaker said. “He is very difficult to match up with. He shoots the three-point shot, he posts up, he can drive it in, a terrific ball-handler. He’s good enough to go by our players so there is nothing that he can’t do on the offensive end and plays with a toughness and passion that I think becomes contagious for their team.”