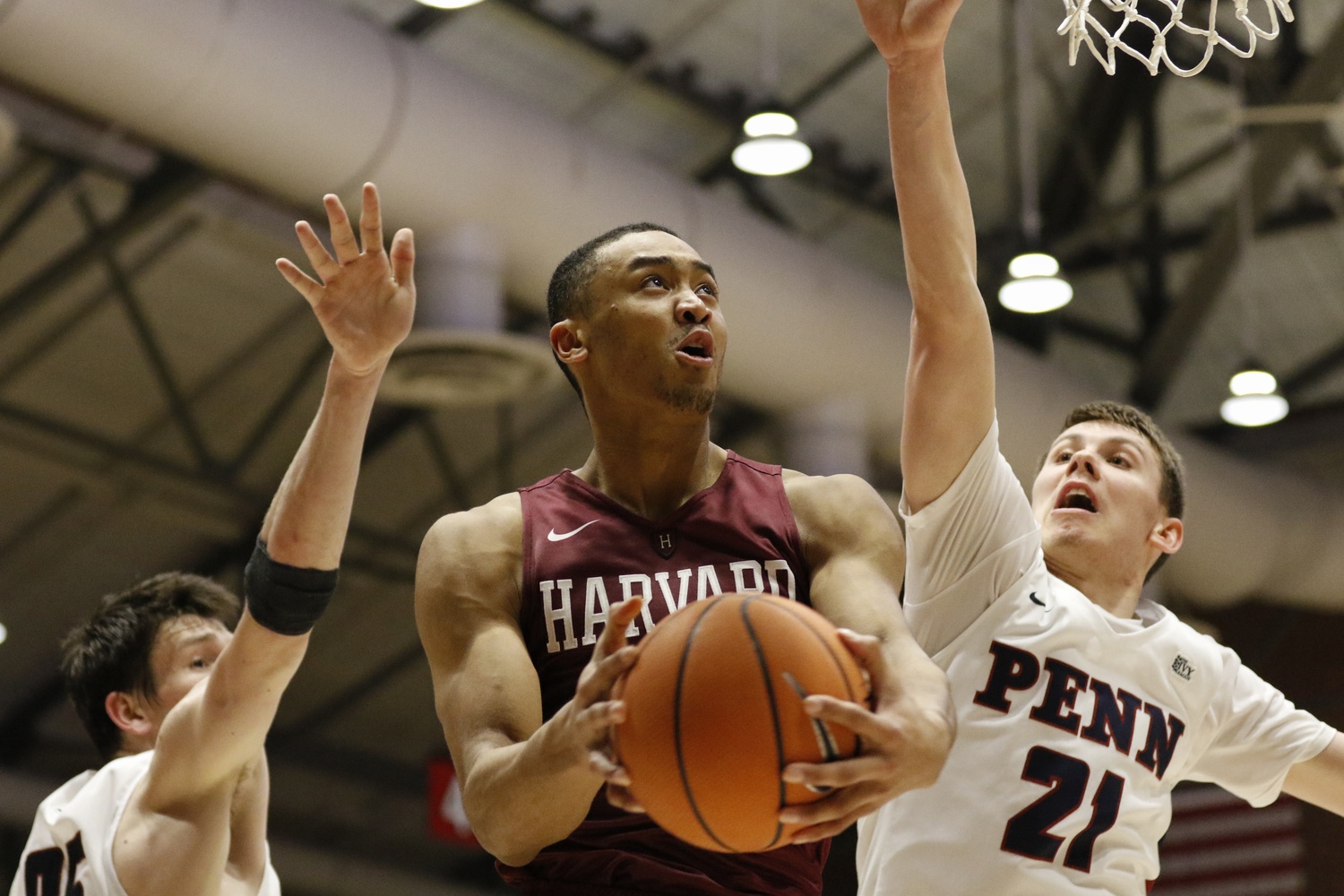 Harvard men’s basketball completed a weekend sweep of Princeton and Penn in its first full Ivy weekend back at Lavietes Pavilion, re-positioning itself back at the top of the Ancient Eight standings.

Having taken down the previously unbeaten Quakers Saturday afternoon, the Crimson are comfortably situated with a 7-1 conference record to at least qualify for the four-team Ivy League Tournament in early March. With Penn the only other team over .500, Saturday’s victory not only gave some breathing room for Harvard, but showed that the Crimson’s talented core could wreak havoc across and beyond the Ivies heading towards March.

“It gives us really good reassurance, knowing [Penn] is beatable,” sophomore wing Justin Bassey said. “For us mainly we want to take it one step at a time and not get too far ahead of ourselves. Coach always mentions we don’t want to win a championship, we want to become a championship team...This is definitely a big confidence booster for us.”

Sophomore forward Chris Lewis had a breakout game Saturday and left the Quakers with no answers on the defensive end. Going 10-of-14 from the field and knocking down a career-high 25 points, Amaker’s primary low post ball-handler was particularly comfortable spinning to the baseline and finishing off the left backboard. This came at no surprise to Penn, as Lewis’ back-to-the-basket skillset earned him 17 points last weekend against Cornell.

A critical determinator for Lewis’ in-game success may not be how he matches up against his defensive opponents—the long stretch of 6’8” Quakers forward AJ Brodeur gave Lewis little trouble—but as simple as staying on the court.

In games against Brown on Jan. 27 and Princeton Friday night, the Alpharetta, Ga. native was limited to 15 minutes of action due to extensive foul trouble. Against Princeton in particular, Lewis had to be taken out of the game within the first five minutes of the second half after venturing just one foul away from the maximum. Without Lewis, sophomore forward Henry Welsh provided some important minutes off the bench.

However, the ball without Amaker’s key interior cog stayed for longer stretches of time on the perimeter on the offensive end. Defensively, Lewis’s teammates like sophomore forward Seth Towns and freshman forward Danilo Djuricic incurred greater responsibilities in the paint, resulting in both tallying a combined nine personal fouls in the game.

“We tell our guys on the ball, don’t bail them out,” Amaker said. “We can’t foul the dribbler. We tell them, you got help behind you. There are times that we did it very well, there are times when we need to be better at it. That’s the difference, in trusting your help and not falling into what you feel like you have to make a heroic play on the ball to stop someone.”

In the Penn contest, only Towns and sophomore point guard Christian Juzang hit the three-foul mark. The referee’s whistle was completely quiet on Lewis as the forward stayed on the court for over 30 minutes.

Moreover, the six turnovers Saturday afternoon was the lowest since last season’s finale against Yale.

The Crimson’s slow and methodical pace offensively led to easier opportunities at the basket, particularly with the team continuously feeding Lewis on the interior and flowing outward from him. Noticeably improving in his overall passing composure and IQ, Lewis logged just one turnover Saturday.

“I give it all to my teammates who were feeding me, trusting in me to keep going at it,” Lewis said. “It also helps when I have great perimeter shooters to pass it out to so it makes it hard for those who need to double-down.”

Quakers coach Steve Donahue surprisingly avoided double-teaming Lewis during the game, instead keeping defenders closer to the Harvard wings. Despite shooting just 5-of-15 from deep Saturday, the Crimson backcourt attacked the rim at a much greater rate than Penn. Bassey and Towns each converted and-ones of their own as Harvard took 21 free throws in the contest, compared to just nine from the Quakers.

“We like to play inside-out,” Amaker said. “This doesn’t just mean a post player, but get the ball to the paint and driving it, you can drive it in and they kick it out.”

With sophomore point guard Bryce Aiken still sidelined, a positive flow from the Harvard offense from both the inside and outside is certainly an encouraging sign for the Crimson.