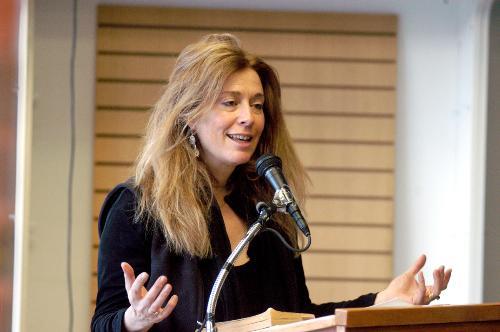 The Library of Congress will award English Professor Jorie Graham a national prize for poetry in December, the library announced last week.

Graham, a renowned poet, will receive the Rebekah Johnson Bobbitt National Prize for Poetry for “Fast,” a collection of poems she published in 2017.

The Bobbitt Prize, which comes with a $10,000 award, recognizes the most distinguished book of poetry written by an American published in the last two years or the lifetime achievement of an American poet, the library wrote in a press release. The winner is selected by a panel of judges consisting of poets and literary scholars who are chosen by affiliates of the Library of Congress, the largest library in the world.

“Graham's astonishing abstract intelligence is tethered in almost every line by the sensory, by the music of language and wordplay, and by the material world that makes the red sleepmask a father cries out for in his last days into a metaphor for the human ‘timestorm’ we inhabit, share, grieve,” the judges wrote in the press release.

The panel considered 191 books before selecting Graham, according to Betty Sue Flowers, one of the judges on the panel and the former director of the Lyndon Baines Johnson Presidential Library.

“Each of us, independently, put Graham in our top ten list. That, in itself, shows remarkable consensus,” Flowers wrote in an email.

Graham could not be reached for comment, but pointed to her personal website, which showcases her work and interviews with media outlets.

Graham is the author of more than a dozen books of poetry. She has received several accolades, including the MacArthur Fellowship in 1990 and the Pulitzer Prize in 1996.

“Fast,” her most recent collection, grapples with the changing nature of the modern world spurred on by technological advances, according to her website.

“‘Fast’ lights up the border of our new condition as individuals and as a species on the brink,” Graham’s website reads.

Guggenheim Fellow and acclaimed poet Catherine Barnett, another judge on the panel, wrote in an emailed statement that “Fast” is a “gorgeous” collection.

“This is a book that feels as if were written during a death watch, at the speed of light,” Barnett wrote.

Joshua D. Bell, a senior lecturer on poetry in the English department, called Graham one of America’s “finest poets.”

“I love ‘Fast’. It's maybe her most intense and astonishing book yet, and that's saying something,” Bell wrote in an email.

Graham will receive the award on Dec. 6 at the Library of Congress in Washington, D.C.. At the ceremony, she will also give a reading of her poetry.