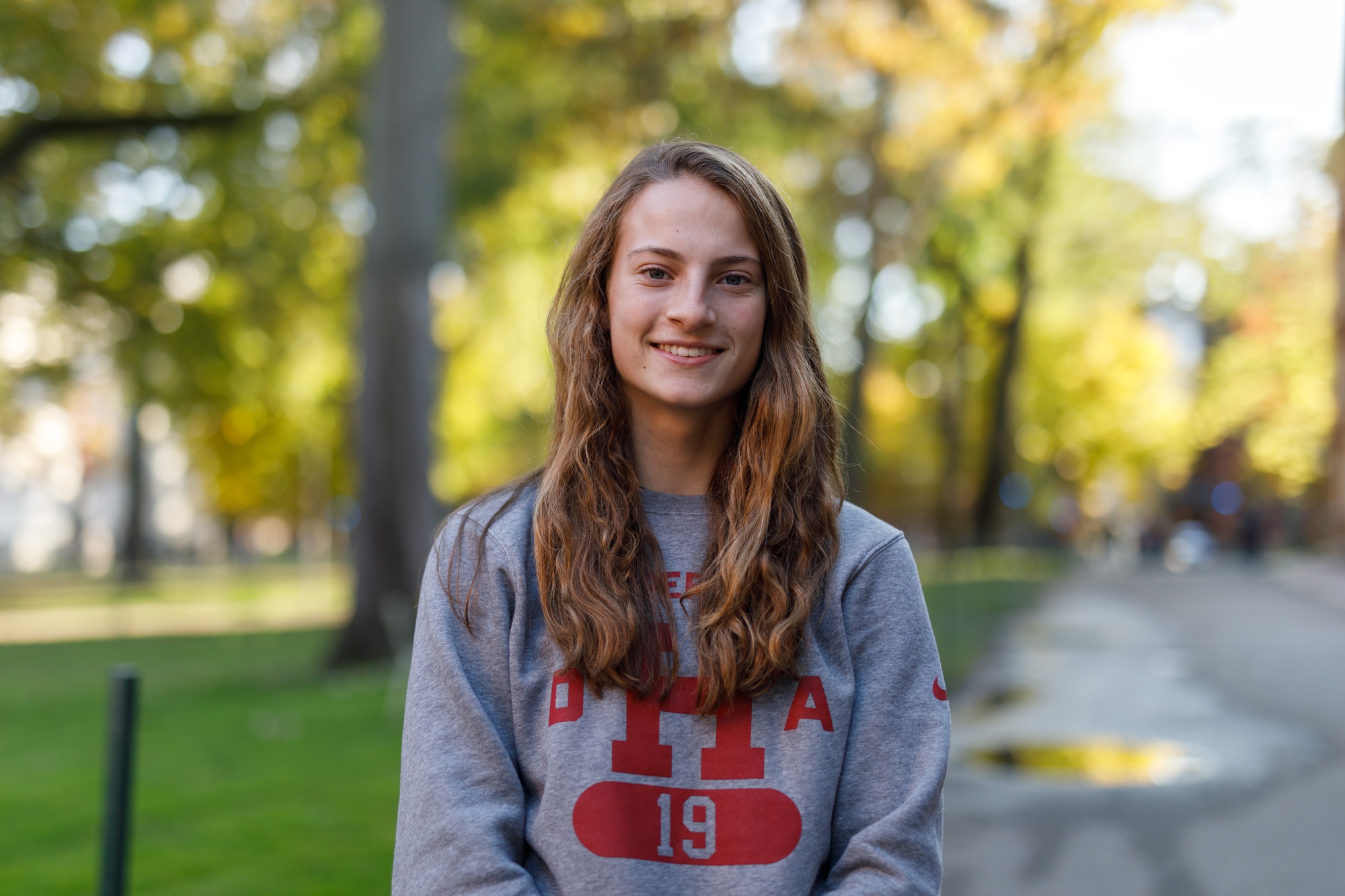 The lodge was giddy with dissent. On one side of the table sat the galvanizers, and on the other, their challengers — each canoodling with, yet remaining far from, the idea of victory. Around them: the crowds, eavesdropping without engaging. It was a debate without a moderator, a clash far from ceasefire. For the members of Harvard’s Nordic ski team, the feud was far from their most strenuous activity of the day. Nonetheless, they chose to cross swords right then and there, smack in the middle of the Craftsbury Outdoor Center Lodge.

“There are always some really good conversations when we go up to Craftsbury,” said Lily Koffman, now a captain of the team. “There’s no Wi-Fi or cell service in the dining hall, so you can’t use Google to settle anything. So basically, a couple years ago, we had this two-hour debate over whether or not pasta is a noodle. It’s still team legend to this day – it got insanely heated, and the teams around us were all wondering what was wrong with us Harvard nerds.”

Some say that ski legends are made on the slopes, yet for the cross-country skiers in crimson, true team folklore is born from their time in the lodge — even if that time happens to be defined by starchy squabbles.

“I do think that pasta is a noodle,” Koffman said, albeit with a laugh. “I would definitely say I’m on Team Noodle.”

However, lodge-talk and off-kilter debates are far from the only responsibilities held by the Crimson. While most Harvard students spend their winters attempting to shield themselves from the snow, for the nordic ski team, snow-time is a synonym for go-time.

“Training can be anything from a three-hour easy ski to intervals with high heart rate and speed,” said Christopher City, who’s entering his 11th season as the Crimson head coach. “We spend a lot of time working on technique when we get on the snow to ensure that our aerobic capacity can carry us as far as it can.”

Because Nordic ski competitions are held on flat trails, two of the most important aspects of the sport are technique and stamina. Thus, constant training is essential to Harvard’s success on the snow.

“On a typical practice day, we get to the track at about 5 p.m.,” captain Jacob Meyerson said. “[We] either do a workout — usually a pre-race workout or distance workout where we ski for around two hours — or we do technique work where we ski back and forth and the coaches work with us to improve our skiing technique. We do this on a pretty small loop, so there’s definitely a lot of time to talk and catch up with our teammates.”

The bonds formed between team members are the Nordic ski team’s trademark. Though skiing is an individual sport, the amount of time that the skiers spend with each other, coupled with the fact that the Nordic ski squad is one of Harvard’s smallest teams, means that a positive team environment is crucial for the Crimson.

“We spend a lot of time together — that’s part of why I love the team,” Koffman said. “The sport is really hard, so it’s only fun if you’re doing it with people you really like spending time with, whether that be by pushing each other in practice or by just joking around.” 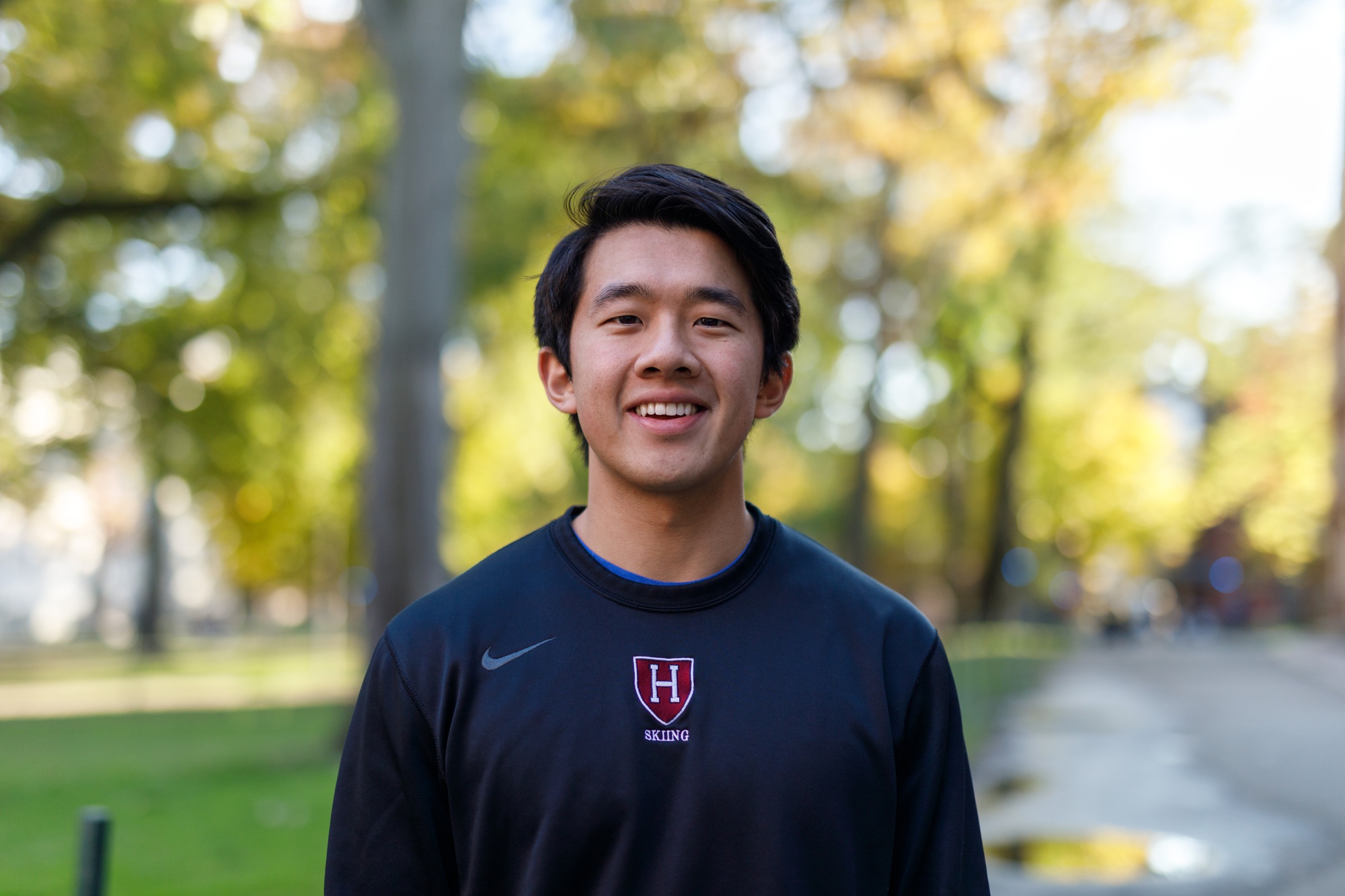 Senior Dennis Bao hails from Edina, Minn., where he led his school to the 2015 state title. By Joshua Y. Chiang

Koffman’s mantra is near-identical to that held by members of the Nordic team’s downhill counterpart: the Harvard alpine ski team. Two types of skiing exist at the collegiate level: Nordic and alpine, both of which the Crimson field a team for. Though the squads compete on different terrains – the former on trails, and the latter on the slopes – a positive team environment is essential to both.

“With such a small team, [being tight-knit] is really the most important part of our success, and we try to emulate that early in the season,” alpine coach Scott MacPherson said. “In September, when we’re getting together to do dryland training it’s more about building that teamwork than getting in shape — figuring out how people work together, and what your identity is within the team. We really push them to develop that so by the time we get onto the snow, everyone knows each other well and how their teammates are going to react to success and failure. When you understand the people you’re competing with, you understand what your role is on the team. That’s really the hallmark of our program.”

When asked about team bonding, any skier on the alpine team will point you to one place: the van. Because of Cambridge’s distance from any suitable race slopes, the squad must travel to Vermont for pre-race practices. Their mode of transportation is the ski team van, a vesicle of everything from early-morning naps to post-competition chats.

“We leave campus at about 5:30 a.m. and get in the van,” said Nellie Ide, captain and last year’s leading scorer. “We all usually sleep on the way out because it’s about an hour-and-a-half drive to our training venue in New Hampshire. We start training around 7:30 a.m. and we’ll ski for about two hours – that’s mainly just going up and down on the course. After that, we drive the hour-and-a-half back to make it in time for noon classes.”

Of course, Harvard’s winter break falls toward the beginning of January — the primetime period for alpine skiing. However, instead of spending their full vacations at home, members of the alpine team can be found on the slopes during the earliest days of the calendar year, a time when scheduling is “a little more forgiving,” as captain Dennis Bao put it.

“Last year, we spent a week at Sugarloaf right before our first race there,” Bao said. “It was really great to just be training on the race venue, seeing that there are so many idiosyncrasies to each course. The chance to practice on the actual race venue in the week leading up to a competition is hugely advantageous.”

As the regular season approaches, the coaches of both teams are excited for the races that lie ahead. Both cite strong leadership and young talent as potential pinnacles of the upcoming season.

“We’re really starting to building something special here at Harvard,” MacPherson said. “The amount of interest in our program has skyrocketed recently. We definitely have our challenges, but looking at our program right now, sometimes I wish I were an athlete on the team.”

With the teams’ first competition, the St. Lawrence Carnival at Mt. Van Hoevenberg, on the horizon, it truly is time to grind for the Crimson. However, with a little bit of flow and a whole lot of snow, the skiers from Harvard should have no trouble doing what they do best: trekking up trails, sliding down slopes, and picking fights over pasta.