When Megan Turner asked her high school teacher for help applying to Harvard, she hoped for a glowing letter of recommendation. What she got was a “negative” essay referencing her “‘small-town’ insecurity” that nearly sank her candidacy.
By Shera S. Avi-Yonah and Molly C. McCafferty 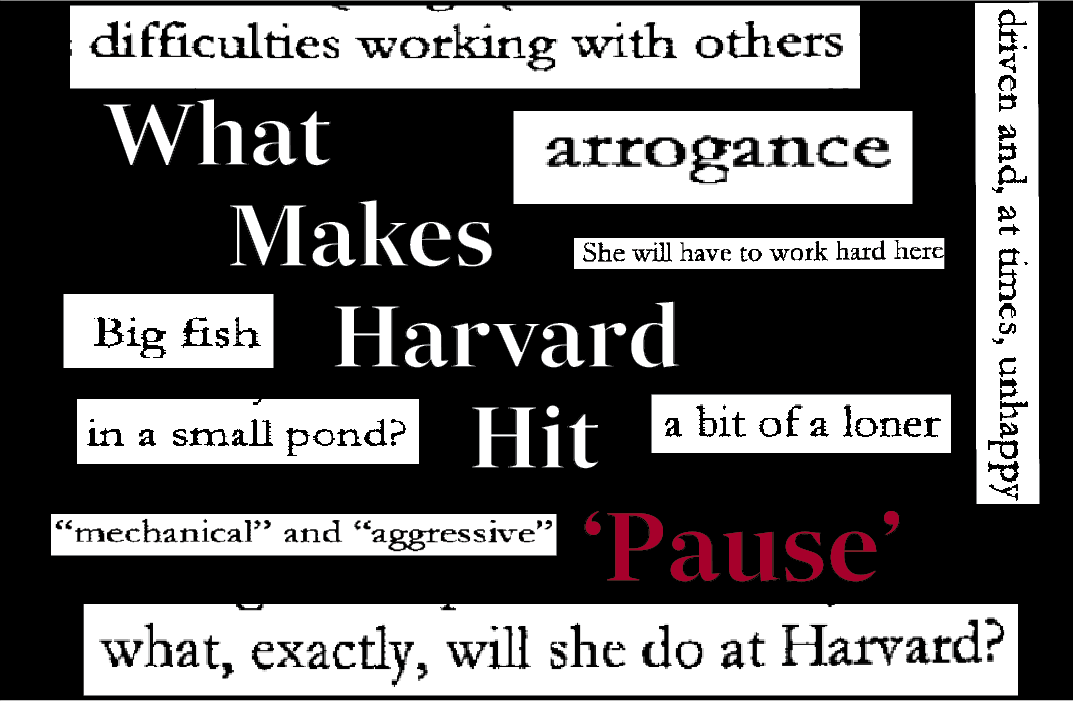 When Megan Turner (not her real name) asked her high school teacher for help applying to Harvard, she hoped for a glowing letter of recommendation.

What she got was a “negative” essay referencing her “‘small-town’ insecurity” that almost sank her candidacy, according to previously confidential papers released in the Harvard admissions trial Monday.

The teacher’s recommendation “raise[d] flags about [Megan’s] personal qualities, her ability to interact with others, and her ‘brightness,’” the filing reads.

Details of Megan’s case — as well as evaluations of 10 other Harvard hopefuls also given fake names — surfaced in a 13-page court filing titled “Discussion Guide to the 2012 Casebook.” Each summer, the College’s Admissions Office profiles a handful of previous applicants in a “casebook” and distributes it to employees. The book is meant to teach staffers how to evaluate candidates, Director of Admissions Marlyn E. McGrath ’70 testified last week. Monday’s filing is the 2012 iteration of this training manual.

Harvard chose to highlight the candidates in the casebook because they were borderline cases, meaning the Admissions Office struggled to decide whether to accept or reject them. For each applicant, the document details the bullet-pointed factors that rendered the high schooler “appealing” and the traits that gave Harvard “pause.” It also provides the final outcome for each student.

The University’s lead trial lawyer William F. Lee ’72 introduced the casebook in court to bolster his argument that Harvard’s admissions process is holistic. The College’s Dean of Admissions and Financial Aid William R. Fitzsimmons ’67 has repeatedly said his office considers each applicant as an individual and not as part of a demographic group.

Whether or not this is true will prove key in the high-stakes trial, which kicked off Oct. 15 in the John Joseph Moakley United States Courthouse in Boston. At stake is whether or not Harvard’s race-conscious admissions policies have led the school to illegally discriminate against Asian-American applicants, as anti-affirmative action group Students For Fair Admissions alleged when it sued the University in 2014.

Harvard has repeatedly denied SFFA’s charges. If the case winds up before the majority-conservative Supreme Court, it could spell the end of affirmative action in the United States.

For Megan — described in the document as a “Native American and Caucasian young woman from rural area of a Mountain States [sic]” — things got worse before they got better.

Reviewers admitted Megan's application essays were “very well-written” but lamented they “came across as very negative and dismissive of her high school context.”

“Some readers may even find them slightly arrogant,” the filings read.

Still, Megan was “very bright and very active,” a “school leader,” and possessed “many energies.” So Harvard began making calls. Admissions officers spoke with the teacher who wrote the less-than-flattering recommendation, his teaching assistant, and Megan’s school guidance counselor.

In the end, “after many hours of debate,” Megan won a spot at the College.

The filing shows others were less lucky. And for anxious high schoolers gunning for a spot in the Class of 2023, the document offers coveted insight into what Harvard seeks out — and what it shuns.

The students described in the document hail from widely different backgrounds and represent varied skill sets, ranging from a “Vietnamese-American woman” who attended a “public school in the heart of a major American city” to “one of the top female recruits for women’s crew.”

But stories of successful applicants prove a common truth: Harvard admissions officers are looking for academic superstars who have overcome adversity in their personal lives and can offer a clear vision of what they would accomplish in Cambridge.

Smarts reigned supreme. In nine of the 11 cases, admissions officers pointed to strong academic performance as a compelling reason for admission. The word “bright” appears eight times in the document.

Staffers were particularly impressed when applicants performed well in school despite facing difficulties at home. Some praised students’ ability to maintain top-notch grades even after moving around and switching schools multiple times. Other employees noted that candidates had surmounted “family upheaval,” “modest backgrounds,” and “financial difficulties” to keep their GPAs intact.

Related: [What one student's marked-up Harvard application reveals about the admissions process]

But admissions officers also looked to the future. Reviewers repeatedly sought to assess whether applicants would find a way to thrive on Harvard’s campus.

Sergei “would make the most of Harvard academics,” the filing reads. “Thomas Smith” would do the same with public service organization Phillips Brooks House and the Institute of Politics, per the document. And “Peter Duran… could do [robotics] in the School of Engineering or Applied Sciences [sic].”

Still, not everyone was successful. In almost every case that ended in a Harvard “yes,” one more factor came into decisive play — the applicant’s charisma.

Related: [Here's what happened in the Harvard admissions trial today]

For one student, nicknamed “Grace Blake Cheng,” personality paid off in spades.

Grace was a “strong student” in high school, but nothing exceptional. One reviewer noted her test scores “suggest she won’t be a top engineering student at Harvard” — and predicted she “will have to work hard here.”

Nonetheless, “unlike most in the casebook,” Grace was a “clear admit.”

“Grace’s teachers, guidance counselor, and alumni interviewer describe her in terms we rarely read,” the document states. “A true ‘1 personal’ — one of the few we see each year.”

Her personality was so “unusually appealing” that she earned a “likely letter” meant to demonstrate Harvard’s “enthusiasm for her case.”

“We include [Grace] because it shows the importance that non-academic and non-extracurricular factors in our process [sic],” the document reads.

Though all of the applicants are “admissible,” the filing asserts almost “none is clear [sic]” — and it tells you why.

The document lists “pause factors” for each candidate. These more problematic traits — including less impressive grades, uninspiring extracurriculars, and excessive braggadocio — spurred lengthy deliberations in the Admissions Office, waitlist placements, and calls to a plethora of teachers and counselors. Once or twice, admissions staffers phoned the students themselves.

Related: [In admissions, Harvard favors those who fund it]

“While a strong overall candidate, Evelyn [Satmar]’s credentials are not unusual in our applicant pool,” the document reads.

“Certainly a strong student but — believe it or not! — not unusually strong in Harvard’s applicant pool,” officers wrote about another student. “Nothing here elevates Peter into the ‘1 academic’ circle.”

Admissions officers also took note of activities outside the classroom. Reviewers mentioned that at least three candidates failed to find an “extracurricular niche” in high school.

“While the package is appealing, the case lacks the ‘hook’ provided by a special academic or extracurricular talent,” officers wrote of Mandisi. “Not clear whether his running will translate to college competition.”

“What, exactly, will she do at Harvard?” reviewers asked of Evelyn.

For other applicants, admissions officers raised more personal concerns — many related to ego.

Related: ['This is not who I am': For Harvard admissions dean, the trial is personal]

Two candidates’ pause factors included “arrogance.” One was placed on the waitlist and never accepted; the other admitted to Harvard only “after many hours of debate.”

Admissions officers particularly pondered whether high schoolers’ hubris would hurt them at Harvard — wondering whether applicants could successfully trade standout status for relative anonymity among hundreds of star students.

“What will his transition be like — from big fish in small pond to Harvard — and how will Sergei interact with roommates, classmates, and administrators?” one reviewer wrote.

For Tracey Eckham, it was her failure to “interact” while still in high school that proved fatal.

Admissions officers took Tracey to task for being “unhappy.” Despite achieving “good scores,” pursuing “many interests,” and taking a “challenging” high school “curriculum,” Tracey was waitlisted and eventually denied admission.

“Letters refer to her as a bit of a loner (‘lone wolf’) and quite driven; letter from crew coach even suggests that she may be depressed and is withdrawn at times,” Tracey’s admissions officer wrote.

“Personal qualities very hard to assess — who is Tracey Eckham?” one reviewer asked.