‘This Is Not Who I Am’: For Harvard Admissions Dean, The Trial Is Personal

The trial investigating whether the College discriminates against Asian-Americans could decide the fate of affirmative action in America. But for Dean of Admissions William R. Fitzsimmons '67, it could also decide who he is at Harvard — and how he is remembered.
By Alexandra A. Chaidez, Molly C. McCafferty, and Aidan F. Ryan 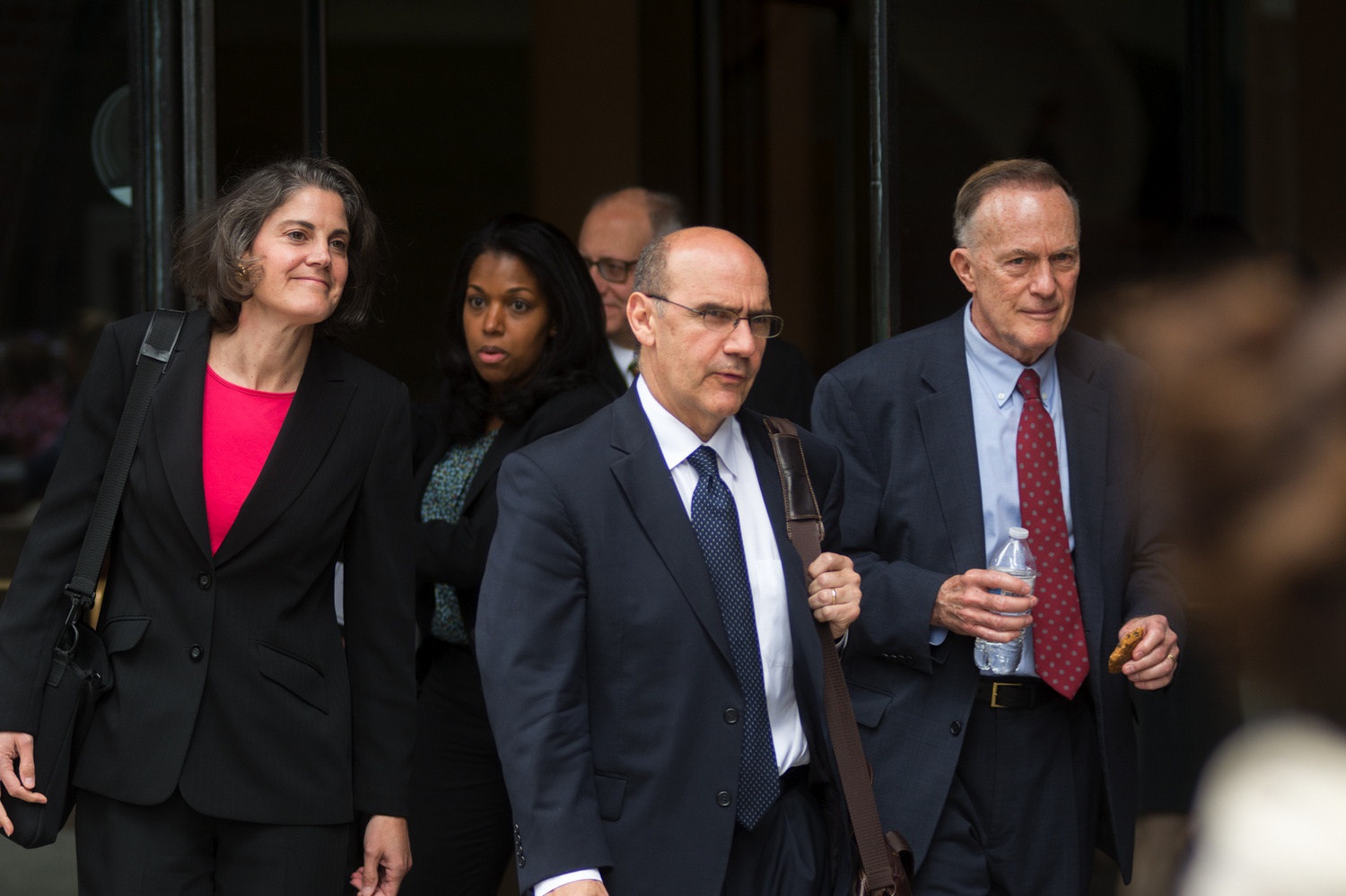 Dean of Admissions William R. Fitzsimmons ’67 had just hit his sixth hour testifying behind the wood-paneled witness stand in the Harvard admissions trial when things got personal.

The lawyer questioning Fitzsimmons — John M. Hughes, an attorney for Students for Fair Admissions, the anti-affirmative action advocacy group suing Harvard — pointed to comments College interviewers had scribbled on certain Asian-American students’ application files unearthed during the trial. One interviewer described a female student as "reserved" and "hard-working." “He’s quiet, and of course, wants to be a doctor,” another interviewer wrote of an unnamed male student.

Hughes argued the reviews constitute “model-minority stereotyping” and hint at widespread anti-Asian prejudice in Harvard’s admissions process. SFFA, which sued the University in 2014 over allegations of discrimination in its race-conscious admissions process, is hoping to prove in court that the school rejects qualified Asian-American applicants in favor of less deserving candidates of other races. (Harvard has repeatedly denied all allegations of discrimination.)

Hughes looked Fitzsimmons full in the face. He asked whether the long-serving dean — who joined the admissions office straight out of graduate school in 1972 — condones the “stereotyping” of Asian-American Harvard hopefuls.

“We do not endorse — we abhor — stereotypical comments,” he said. “This is not a part of our process. This is not who I am and not who we are.”

It was the second day of the admissions trial, which kicked off Oct. 15 in Courtroom 17 of the John Joseph Moakley United States Courthouse and is expected to last for roughly three weeks. Fitzsimmons had spent much of the preceding day — and would spend most of the next two — answering detailed questions about how and why his office determines whether high schoolers are Harvard material.

The dean remained calm and composed for most of the morning Tuesday, fielding Hughes’s questions with clinical precision. His impassioned denial of the plaintiffs’ claim that Harvard stereotypes — delivered rapid-fire in forceful tones — marked a crack in his impassive facade. It was the first time he explicitly equated his moral integrity with the integrity of Harvard’s admissions process.

But in some ways, that’s long been true.

Fitzsimmons’s legacy and his ties to Harvard stretch back much further than this October — further than the launch of SFFA’s suit in 2014. He started as an undergraduate at the College in the 1960s and never really left, earning graduate degrees from another University school before embarking on his 32-year tenure as dean in 1986. It’s been decades since Fitzsimmons became the face of Harvard admissions.

In the first week of the high-stakes and high-profile trial, Fitzsimmons repeatedly drew on his personal history at the College, referencing his own experiences as he sought to defend his alma mater.

The trial could decide the fate of affirmative action in the United States. But for Fitzsimmons, it could also decide who he is at Harvard — and how he is remembered.

Intent on preserving both Harvard’s reputation and his own, Fitzsimmons took the witness stand at 2 p.m. Monday and did not leave it — apart from scheduled breaks — until Thursday around the same time.

In total, he spent close to 10 hours during the first week defending against SFFA’s accusation that the way Harvard recruits, evaluates, and selects its students is not only illegal but infected with prejudice.

“You have let the wolf of racial bias in through the front door,” SFFA lawyer Adam K. Mortara said on the opening day of the trial. Attorneys for the group spent the next hours and days trying to force Fitzsimmons to admit it.

Hughes had his first attack ready as soon as the dean stepped behind the witness stand. He asked Fitzsimmons why white students hailing from “sparse country” — meaning states with low population density — received invitations to apply to Harvard while Asian-American students with higher SAT scores did not.

A Crimson analysis of data released during the trial revealed that, in Harvard admissions cycles stretching from 1995 to 2013, Asian-American applicants earned the highest average SAT score of any racial group that applied to the school. In that same time period, they also saw the lowest acceptance rate of any racial group.

In response, Fitzsimmons said the admissions office seeks out prospective applicants from “all backgrounds, especially those with disadvantaged economic backgrounds.” He said Harvard contacts students “from the heartland of America” because the University is “not on people’s radar” in that part of the country.

He said the College reaches out to these students even if they achieve lower test scores than their peers in urban locales. To prove the benefit of recruiting high schoolers from rural areas, Fitzsimmons noted that his own freshman- and sophomore-year roommate at Harvard — Michael B. Dolan ’67 — was born and raised in South Dakota.

“We do everything we can to reach out to a much broader range of people,” Fitzsimmons said. “We want to break the cycle.”

The next day, Fitzsimmons offered an hours-long justification of the “personal ratings” Harvard admissions officers give to applicants. Documents released over the summer as part of the suit showed that College reviewers tend to give poorer personal scores to Asian-American high schoolers.

Fitzsimmons conceded that personal rankings skew lower for Asian-Americans but attributed this partly to the fact that teacher and counselor recommendations are typically “stronger” for white students. He also emphasized that admissions office employees weigh a plethora of factors when evaluating candidates.

[In admissions, Harvard favors those who fund it, internal emails show]

Ultimately, he said, he’s unsure why white students typically earn higher personal scores. The dean told the audience his job can be hard and confusing.

“We simply know that because we’re aware,” Fitzsimmons said. “It’s our office, and we’re in the business of it. There’s evidence of it.”

“As I said in my deposition, there’s no way, looking at the whole person, to come up with a definitive answer,” he added.

On the third day of the trial, Fitzsimmons faced grilling over Harvard’s special treatment of wealthy and well-connected applicants — and over the “Dean’s Interest List,” a special and confidential list of Harvard applicants with links to top donors who see a significantly inflated acceptance rate.

Fitzsimmons said the tactic is “important for the long-term strength of the institution.” He said favoring Harvard donors ensures funding for scholarships, among other things.

Once again, he referenced personal experience in an effort to explain how things work — even though, this time around, his testimony was perhaps less likely to win him fans in the courtroom.

Fitzsimmons said that, sometimes, the children of top donors simply aren't College caliber. Even when that happens, the special treatment continues — Fitzsimmons cushions the blow with a personal message.

The dean said he often gives Harvard’s best benefactors “an advance warning” that their kids probably won’t make it to Cambridge.

‘THERE’S NO FORMULA FOR THAT’

When Lee stepped up to examine Fitzsimmons Wednesday, he granted what appeared to be the dean’s fondest wish: He gave Fitzsimmons the chance to talk about his time as a student at the College.

Long before becoming dean of admissions, Fitzsimmons was a record-smashing goalie for Harvard’s varsity hockey team. A resident of Kirkland House and a Social Relations concentrator, Fitzsimmons — known to his friends as “Fitz” or “Fitzy” — saved 91 goals in the 1965 Beanpot tournament, setting a school record which still stands today.

He also participated in several public service organizations including the Phillips Brooks House and the Combined Charities Drive. And he was a member of the Pi Eta club, a social group one member once described as a “blue-collar” final club.

After graduation, Fitzsimmons stayed in Cambridge to attend the Graduate School of Education and obtain his Master’s and doctorate degrees. 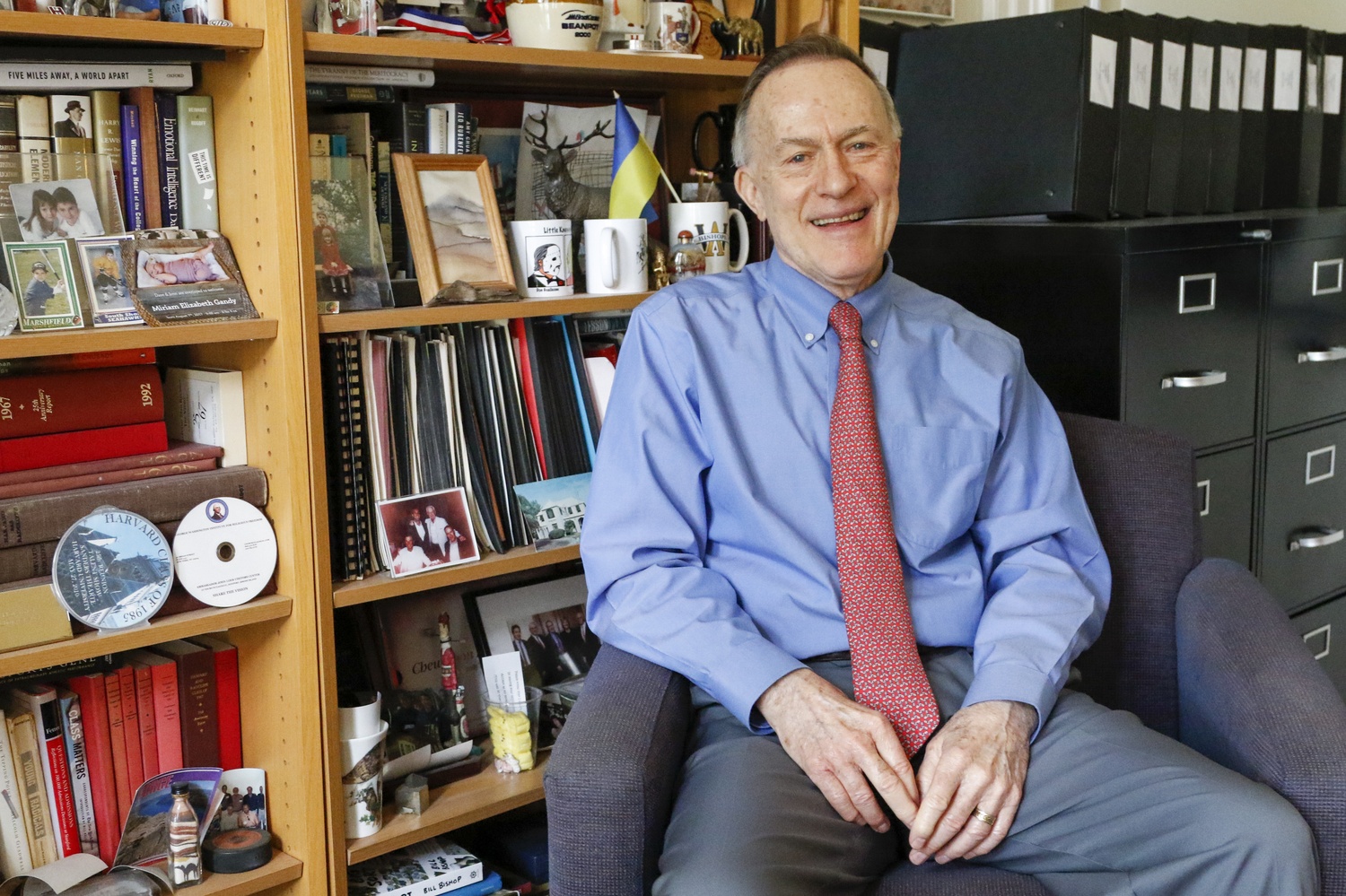 William R. Fitzsimmons '67, known as "Fitzy" in his youth, is the dean of admissions and financial aid at Harvard College. By Timothy R. O'Meara

He found his professional calling when he joined the admissions office as its director in 1972. Except for a brief stint at the Harvard Fund in the eighties, he never left. He became the dean of admissions in 1986.

In his testimony Wednesday, Fitzsimmons said none of this would have been possible without Havard’s generous financial aid program. He spoke at length about his experiences as a first-generation College student from a low-income background.

The dean said he grew up in Weymouth, Mass. to parents who ran a gas station and a convenience store — which he described as a “mom and pop” operation. He said people in his town never expected anyone they knew would make it to Harvard.

“Like many low-income students, I paid my parent’s contribution because they couldn’t afford it,” Fitzsimmons testified.

He argued his own life story proves a fundamental truth: Harvard and its affiliates are better off when the school seeks diversity in its student body. Fitzsimmons said the admissions process he has helped shape for the past three decades is structured to ensure high schoolers from a wide range of socioeconomic and racial backgrounds can attend the world’s top-ranked university — and that it shouldn’t work any other way.

“My life has been extraordinarily enriched,” Fitzsimmons said of serving as dean at a time when Harvard’s student body is more diverse than ever before.

In spite of the minute procedural details he has spent years enforcing — and hours recounting on the witness stand — Fitzsimmons said some parts of the Harvard admissions process are simply inexplicable.