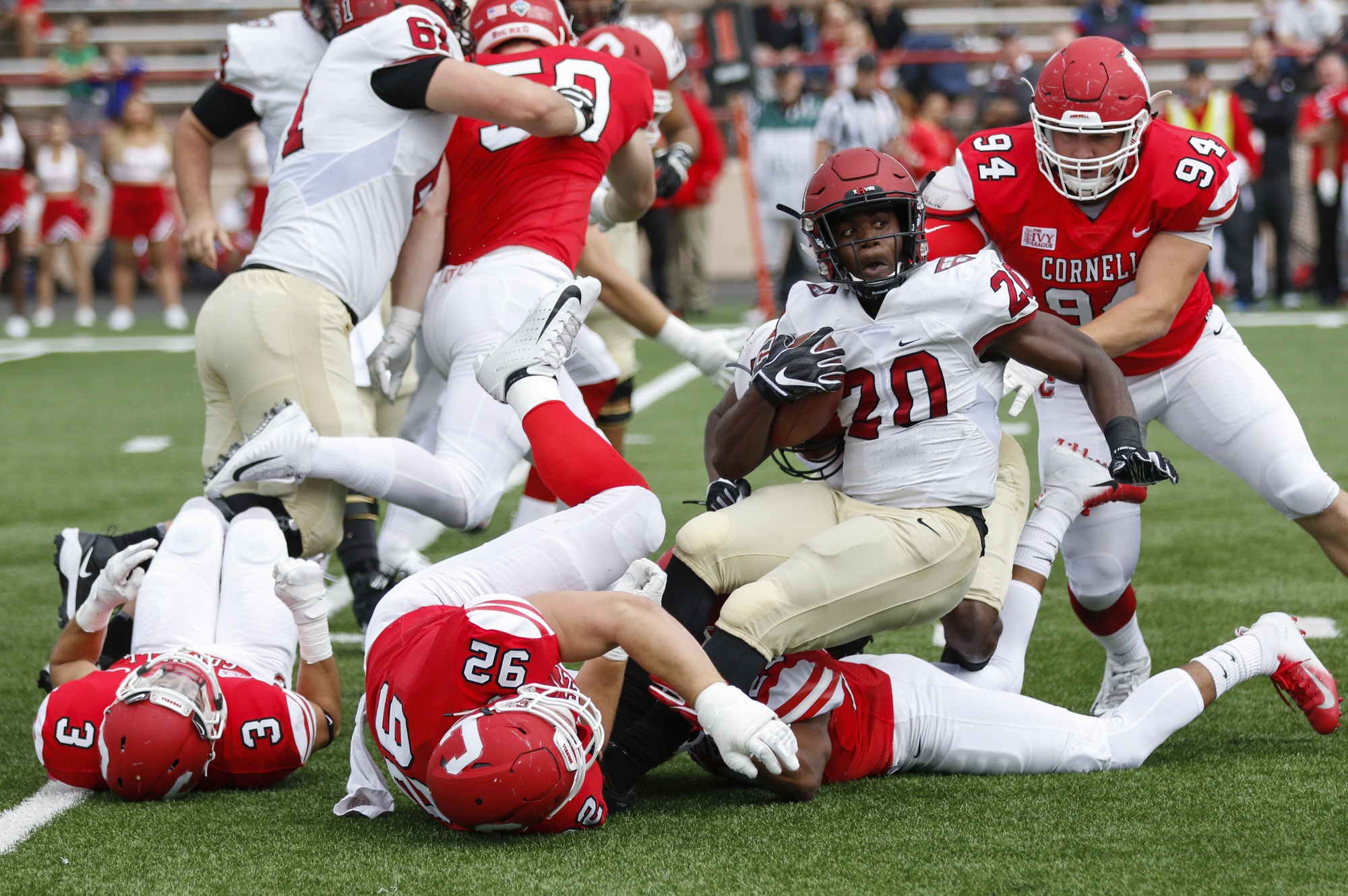 The Crimson (2-2, 1-1 Ivy) has lost the last two weeks. In each of those games, the spread has been within the number of points that the Harvard special teams has given up.

Right at the five minute mark in the second quarter, Harvard set up to punt the ball away. As freshman punter Jon Sot took the snap, his blocking collapsed. The first year sent the ball right into the body of Big Red defender Dylan Otolski. The ball rolled behind Sot and Cornell’s Justin Bedard scooped it up, cradling his cargo as he skipped into the end zone escorted by a squadron of teammates.

The ensuing seven points tied the heading into the half.

Saturday’s second incident involved a kickoff. Following a junior Jake McIntyre field goal, the Crimson’s freshman kicker Jonah Lipel sent the ball back to the Big Red’s David Jones. The home team’s returner fielded the boot in his own end zone and rather than opting for guaranteed possession at the 25-yardline, he sprinting into the mass of Harvard coverage men.

Making a move, Jones found the sideline and beat the rest of the Crimson kickoff team in a 100-yard foot race to the touchdown. Jones threw up his hands and was immediately swarmed by his teammates. The whistles of the referees couldn’t be heard of over the roar of the Cornell home crowd.

However, as the noise died down, the head referee took to the center of the field to announce that the Big Red had held a man. The penalty erased the touchdown and pushed Cornell back 10 yards from the spot of the foul, the Big Red 28-yard line. In effect, the flag negated 82 yards for the home team and erased the six points from the scoreboard.

Last week’s loss wasn’t the first time the special teams unit has cost Harvard some points. In the 23-16 loss to Rhode Island, the unit accounted for nine of the visitors’ total points.

Similarly to this weekend, Sot’s first punt of the night was sent out the back of the end zone on a block. With the safety, the Rams claimed the first points of the contest and the early lead. In the third quarter, Rhode Island scored on a 97-yard kickoff return — unlike Cornell, managing to keep the referees’ flags in their pockets.

“We clearly have a lot of things to improve upon in special teams,” Crimson coach Tim Murphy said. “We’ve got some young specialists and it’s a combination of things. We’ll get it figured out.”

Exempting the blocks and returns for touchdowns — which cannot be attributed to the kickers alone, or sometimes at all — the freshmen kickers are actually excelling. For Lipel, against the Big Red he sent every one of his five kickoffs to the end zone.

For punters, excellence is a bit harder to quantify. The most indicative number on Sot’s stat sheet is zero. The freshman has punted exactly zero touchbacks. Anecdotally, when the team needs a long boot the freshman will send it 50 yards. When it needs to pin the opponents, Sot’s punts bounce nearly perfectly within the 20, nearly without fail.

Nearly all of the 2017 season featured the constant question: who will be the starting quarterback? Then-freshman Jake Smith eventually won the job from then-senior Joe Viviano and things were settled. Then Smith was yanked against Yale leading Viviano to take over.

With Viviano’s graduation and another year of maturity under Smith’s belt, the sophomore entered the season has the undisputed starter. Smith as since started all four contests. A wrench was thrown in to that manner of thinking right before halftime this weekend.

With 2:33 remaining in the second quarter, Harvard received a Cornell punt. Unannounced, senior quarterback Tom Stewart took the field in place of the struggling Smith. The drive finished two incomplete passes later on a turnover on downs. Stewart was handed the offensive reins again 28 seconds later only to throw three more incomplete passes and lead the Crimson into the locker room.

After the intermission, Stewart returned and did the only thing he could do: better. On his first drive out of the break, he completed both of his passes — notching a clean 23-yard sprint in the process — with the second toss landing in the hands of senior Adam Scott who took it 30 yards for six.

“We were just struggling to throw the football,” Murphy said. “It wasn’t any one thing, it wasn’t all on the quarterback but we we’re just — statistically and otherwise — we weren’t really a balanced offense in the first half. At that point, we kind of had nothing to lose. We have a senior that we felt like can throw the ball...and Tom really responded.”

When the final whistle blew, Stewart had completed seven of his 23 attempts for 100 yards and two touchdowns. Smith, prior to his exit, managed to complete three of his 11 tosses, for 37 yards. Perhaps a little bit of drama has been introduced into the quarterback position yet again.

ONE FOR THE BOOKS

McIntyre has been a mainstay for the Harvard offense all season, particularly in the last two weeks. The junior has made six of his seven field goal attempts and every one his extra point tries. In total, McIntyre’s foot has accounted for 27 Crimson points this season. That’s over one fourth of the team’s total points coming from a player that can only score one and three points at a time.

Against Rhode Island, he sent all three kicks through the uprights, successfully keeping Harvard in the game when the offense couldn’t find its way into the end zone. In Ithaca this weekend, he booted his career long. Lining up from 42 yards, McIntyre gave the Crimson the 17-14 lead with the clean boot through the uprights.

“He’s an amazing kid,” Murphy said. “He’s so incredibly consistent that we sort of just assume it’s going to happen. His level of excellence is just amazing. That kid’s going to go a long way in life because that’s how he does everything. It’s just how he is.”

Shampklin is another one of Harvard’s players that can boast quite a few of his own points. This weekend was no different. In the opening drive, Shampklin busted free and ran untouched 47 yards to six points. For a moment, things looked to be trending in the direction of another San Diego-style blowout. They weren’t. Still, Shampklin managed a career high.

“[It was the] same as week one, same as week two, same as this week,” Shampklin said. “The o-line, just doing their job, always blocking. I just have to be patient, wait to see the holes and as soon as I see them, I just have to hit them. Everybody’s blocking so it makes it easier on me.”

The second-year rushed for 191 yards on the afternoon, notching 27 carries. The lone touchdown was Shampklin’s fifth on the season, the most of any of the backs.

— Staff writer Cade Palmer can be reached at cade.palmer@thecrimson.com.