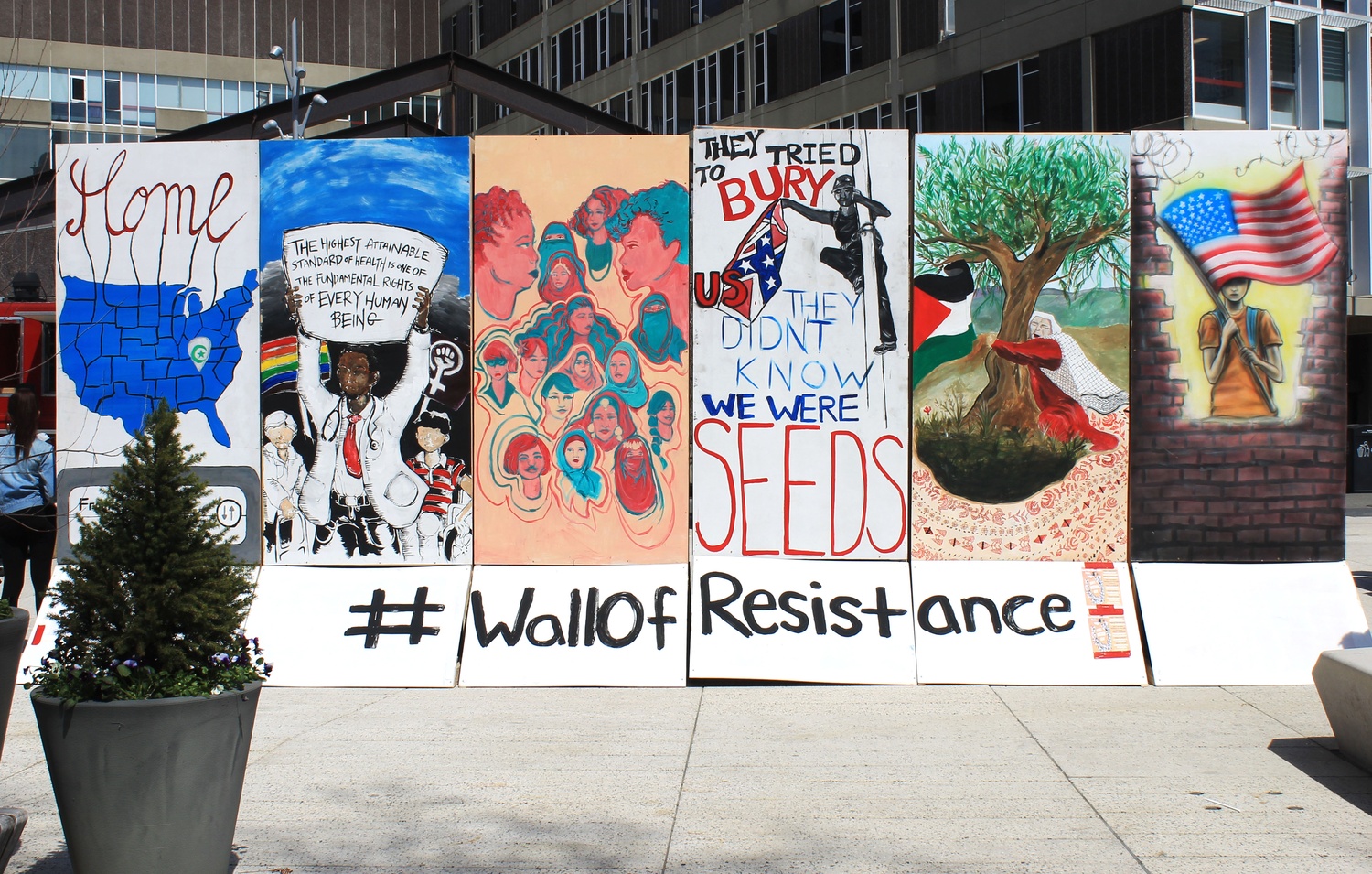 Student activists and artists came together and erected the Wall of Resistance in an act of protest against President Donald Trump’s policies. By Kathryn S. Kuhar
By Alice S. Cheng, Crimson Staff Writer

Dubbed “The Wall of Resistance,” the public art project was created by students from the College, the School of Public Health, and Lesley University, among other area schools. Drawing dozens of onlookers during a sunny lunch hour, the Wall was the backdrop for live performances, including programmed speeches and an open-floor session.

Lead organizer Asaad Traina, a student at the School of Public Health, opened the set of performances by talking about how the discrimination he and his family faced as Muslim has inspired his activism.

Later, artist Jhair James from Lesley University said the panel he painted on the wall was meant to “call out institutional oppressive forces” and show the violence people of color suffer as a result of police brutality.

“You can’t ignore the fact that regardless of your preconceived notions of people of color, people are still being killed,” James said.

The wall also displayed panels focused on the impact of the planned U.S. border wall, how Palestinians were affected by the United States’ relationship with Israel, the struggles of women of color, the inequalities in the healthcare system, and the refugee crisis and Muslim ban.

Fatima M. Bishtawi ’17, co-president of the Palestine Solidarity Committee, said the project was meant “to bring all these different groups together and bring light to the issues that these groups face.”

“Putting them side by side on this wall...asserts that we are united in facing these issues and specifically that we stand to resist the walls, which are metaphorical for the greater boundaries and obstacles and oppression that all these groups face,” Bishtawi said.

“We wanted it to be a public installation piece...because I think it makes way more of an impact if it’s outside and accessible to everybody,” Alfageeh said. “We’re not trying to just talk to like-minded people; hopefully by having something like this out, we will start a conversation.”

Traina said he hopes the work will influence “people who are ignoring what’s happening because it doesn’t affect them directly.”