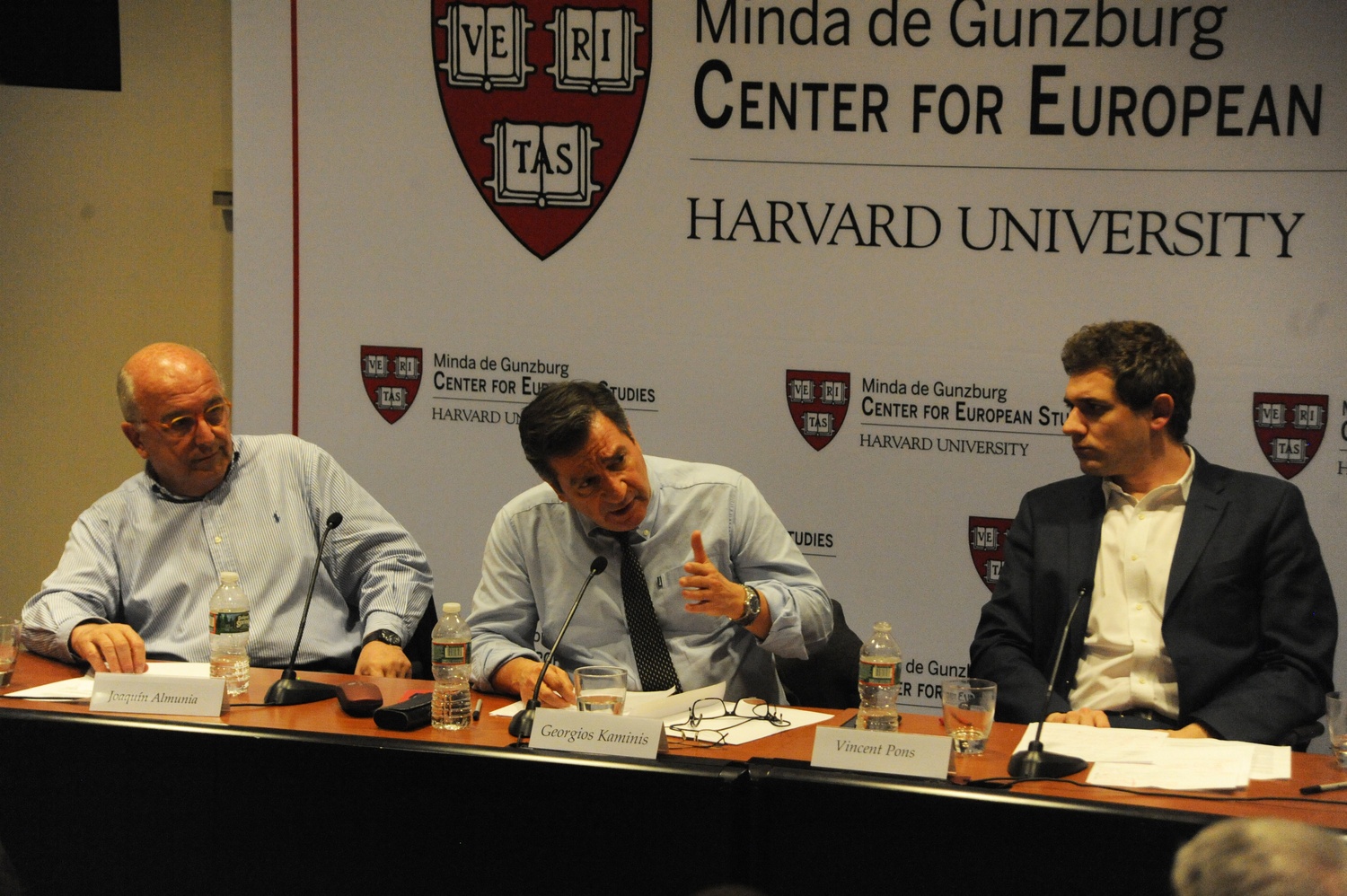 Georgios Kaminis, the current mayor of Athens, speaks at the Future of the Left Symposium at the Center for European Studies Wednesday afternoon. Among other things, Kaminis discussed the future of liberal politics in the face of rising right wing populism. By Matthew W DeShaw
By Ike J. Park, Crimson Staff Writer

The Mayor of Athens Giorgos Kaminis voiced his concern over the rise of far right-wing politics across Europe at a panel Tuesday, proposing a new direction for liberal politicians across the continent.

The event, titled “Is There a Future for the Left in Europe?” is a part of a symposium organized by the Center for European Studies that looks to examine the rise of populist parties that are changing the political landscape in elected bodies across Europe.

In his opening remarks, Kaminis highlighted the necessity for European nations to remain members of the European Union to avoid negative consequences of globalization.

“I strongly believe in the European project and I want my country to be part of Europe. Many countries, especially a small country like Greece, would not be able to survive the competition outside the EU,” Kaminis said. “The challenges by globalization today can only be tackled effectively either by large states such as United States of America and China, or intergovernmental entities.”

Kaminis then suggested that the left-wing parties should spend their efforts establishing wealth redistribution policies to prevent the inequities that give rise to radical political movements.

“Historically, capitalism has proved to be the most capable in producing wealth and increasing the size of the pie. Economic growth cannot be achieved outside capitalist systems,” Kaminis said. “What is at stake now is first how the pie will be allocated in a just way.” And secondly, how alongside the traditional business model, we can also develop forms of social entrepreneurship.”

The mayor also discussed at length how Athens led the effort to accommodate undocumented migrants when a wave of refugees began flowing into Greece from Turkey in 2015.

“The city of Athens promptly mobilized, leading by example. It was the first city in the country to provide municipal land to establish the first refugee site. Since then, the municipality of Athens participated in housing refugees,” Kaminis said.

Joaquín Almunia, a panelist and fellow at the Center for European Studies, argued that European left-wing politicians need to adopt new political agendas focusing on climate change and migration to appeal to their voters and to remain competitive against their right-wing counterparts.

Another panelist, Sławomir Sierakowski, the leader of the left-wing Polish activist group Krytyka Polityczna, disagreed with Almunia that the left-wing parties needed a new agenda. Instead, Sierakowski advocated for the use of bolder political rhetoric from European liberal democrats.

“Populists have no shame. They don’t hesitate. This is maybe what we should lose. Maybe we should push more on the realism in politics. This is why I don’t think it is an agenda problem. It is about being soft in politics, because [populists] are tough on the other side.” Sierakowski said. “We should care less about how do we look, because they don’t care.”