College Admits 14.5 Percent of Early Applicants to Class of 2022

William R. Fitzsimmons '67, Dean of Admissions and Financial Aid, poses for a photo in his office ahead of the release of early admissions decisions for the Class of 2021 last year. By Jessica M. Wang
By William S. Flanagan and Michael E. Xie, Crimson Staff Writers

The College notified 964 students of their acceptance into the Class of 2022 Tuesday, representing 14.5 percent of the 6,630 applicants for early admission.

“The one thing we can say with certainty is that the numbers rose this year,” William R. Fitzsimmons ’67, Dean of Admissions and Financial Aid, said in an interview Tuesday. “In general terms, it appears that more institutions had increases than the reverse… Early admission, in one form or another, is the new normal.” 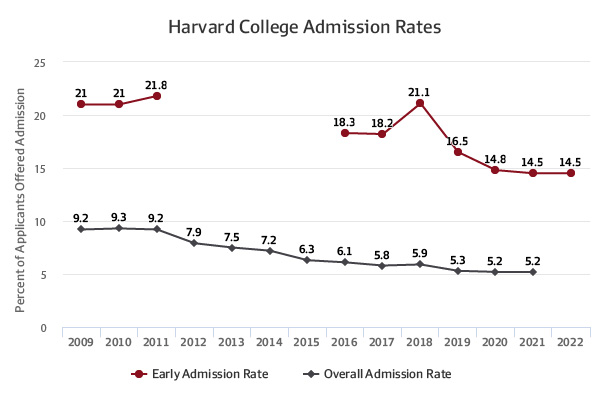 Despite the relatively large pool of students accepted early, Fitzsimmons said the admissions office “will certainly be mindful of coming in on target” for class size when reviewing the regular applicant pool.

The percentage of Asian American early admits grew the most, increasing from 21.7 percent last year to 24.2 percent this year. Harvard is currently facing scrutiny from both the Department of Justice and a separate lawsuit accusing the College of discriminating against Asian Americans in its undergraduate admissions processes.

Women comprise 47 percent of admitted early applicants, a small decrease from 48 percent for the Class of 2021.

Additionally, the College saw an increase in economic diversity among both applicants and admits. So far, almost 58 percent of admitted students have applied for financial aid—up slightly from last year—and roughly 13 percent have requested application fee waivers, an increase from 10.7 percent for the early admitted Class of 2021. First-generation college students make up almost 10.6 percent of early admits, compared to 8.7 percent last year.

According to Fitzsimmons, the pool of early applicants is typically less diverse than that of regular applicants, though he believes recent efforts to increase awareness of the early admissions program have served to mitigate some of the disparities.

“Traditionally, early programs have tended not to reflect the excellence and diversity that you see out in the world, so one of the real pushes over the past decade or so—and part of it was giving it up and then bringing it back—is to make certain that people from all of those backgrounds do consider early,” Fitzsimmons said. “We’re delighted to see that we had greater economic and ethnic diversity not just in the pool, but in the admitted group.”

Although Fitzsimmons said earlier this semester that he was unsure about how natural disasters could affect prospective applicants earlier this semester, the geographic and regional distribution of students remained similar to previous years. Among admitted students, 10.2 percent applied from outside the United States, including 2.3 percent of students who applied from Canada.

Fitzsimmons said he continues to support the role of alumni in the Admissions Office’s work.

“We have had this robust alumni network helping us for many, many years, and I think it really makes an enormous difference,” Fitzsimmons said, “Certainly with our high yield on admitted students, but also on the excellence and the quality of the people who end up applying.”