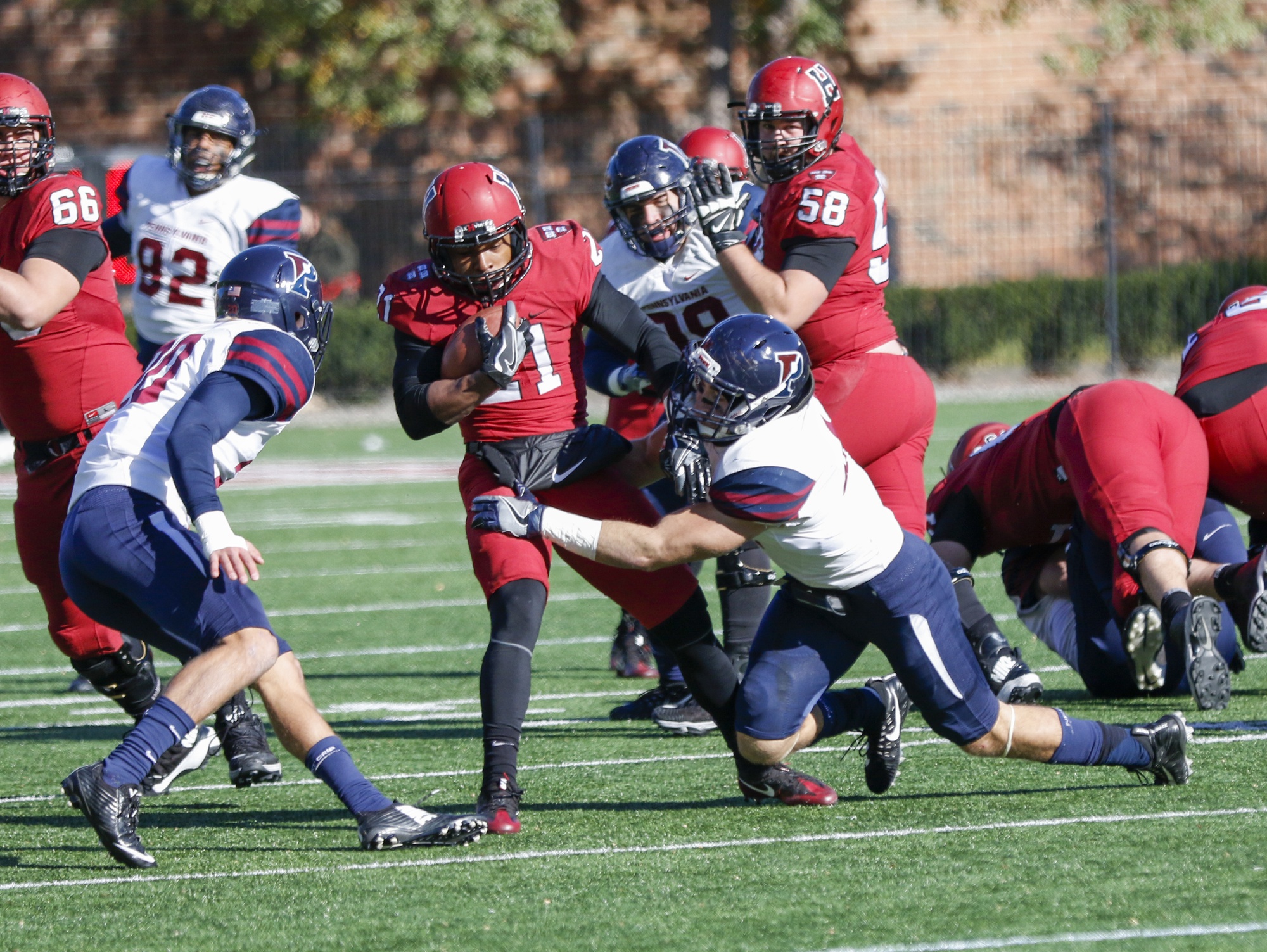 Quakers tacklers wrap up junior running back Charlie Booker. The rusher finished with 35 yards, his lowest total of the year, and two fumbles. By Timothy R. O'Meara
By Jack Stockless, Crimson Staff Writer

In 2014, Penn football finished the season 2-8, with a 2-5 mark in conference play, good for sixth place in the Ivy League. That year, Harvard coasted to an undefeated season and an Ancient Eight championship, outscoring its opponents by over 200 points over the course of the season.

Since then, the Crimson’s record has declined yearly, and so has its performance against the Quakers. In the most recent chapter, Harvard dropped a 23-6 contest against visiting Penn, which officially knocked the Crimson (5-4, 3-3 Ivy) out of title contention after Yale bested Princeton.

As the final score indicates, neither the Harvard offense nor the defense had a particularly good showing on Saturday afternoon. The Quakers (5-4, 3-3) tallied the most rushing yards of any Crimson opponent, and the Harvard offense scored single-digit points for the first time since 2009.

“At the end of the day, when you've got three trips to the red zone, you've got to come away with 21 points,” Crimson coach Tim Murphy said.

Interestingly enough, that low-scoring loss also came against Penn. To add insult to injury, that 2009 game propelled the Quakers over the Crimson in the Ivy League standings, and Penn went on to win the league with one more win than Harvard.

In 2009, the Crimson had a chance to launch a comeback, and 2017 was no different. With 22 seconds remaining in the third quarter last Saturday, Quakers kicker Jack Soslow notched his second field goal of the day to make it a two-possession contest, 20-6.

However, Harvard made little progress on three full drives in the fourth quarter. The first looked promising, with a seven-yard end around to Justice Shelton-Mosley and a 14-yard completion to Adam Scott. On the next play, the drive collapsed when running back Charlie Booker fumbled and Penn’s Brody Graham recovered.

“So many opportunities, we got the ball away, and that’s something we’ve been lacking early in the season with getting those takeaways,” Quakers coach Ray Priore said. “That creates great energy and momentum, and our offense then capitalizes on it.”

The second and third pushes downfield looked equally promising, as quarterback Jake Smith and his halfback/tight end corps connected for big gains. Each drive eventually culminated with a series of incompletions. Neither possession would have made much of a difference, however, since Soslow had already extended Penn’s lead to 23-6 with his third field goal.

From the Quakers’ first snap of the game, it was clear the Crimson would have to contend with a force out of the backfield. Senior running back Tre Solomon took the handoff, blasted around the right edge, and coasted to the north end zone for a 77-yard touchdown.

By the end of the game, Solomon had amassed a season-high 181 yards on 15 carries, good for 12.1 yards per attempt. Sophomores Karekin Brooks and Abe Willows added 66 and 35 yards, respectively, which helped bump Penn’s total to 281 yards on the ground. This mark was the highest of the season against Harvard.

“I think it just all started up front with the offensive line,” Solomon said. “We were saying it all week—if we were going to have success, then they’re going to have to be the ones that make us successful.”

The Quakers’ rushing-heavy attack made up for uneven performances by quarterback Will Fischer-Colbrie and receiver Justin Watson.

The senior signal caller completed just over half of his passes, going 13-of-25 for 130 yards. He was intercepted twice, both times on the Crimson’s end of the field. His second pick proved more significant, as senior safety Tanner Lee jumped a route in the end zone to prevent a Penn touchdown as the first half expired.

Fischer-Colbrie’s sole touchdown of the game was reeled in by none other than Watson, who completed an over-the-shoulder snag in the end zone while draped in double coverage. Besides the impressive catch, Watson was relatively silent. The senior recorded his lowest receiving total of the season, gaining 48 yards on eight catches.

A four-play sequence in which each team lost a fumble made a rather lopsided contest interesting down the stretch.

After Smith was brought down on a sack and Zach Schmid punted the ball, Harvard received its big break. Solomon, who had imposed his will all afternoon, appeared to have broken away for another big gain, but Lee punched the ball out of his grasp. Senior Tim Haehl covered the loose ball, giving the Crimson new life with 12:24 left and a two-touchdown gap.

On first-and-10 at the Quakers 45, Booker took Smith’s handoff and immediately bounced into a group of Penn defenders. Harvard fans are accustomed to seeing Booker rebound from early contact, shrug off would-be tacklers, and drag others down with him. This time, however, the junior lost possession.

“I think the bottom line is that defensively we had some great takeaways, but we didn't match it by doing a good enough job on ball security offensively,” Murphy said.

The two turnovers happened in just 58 seconds of game action. On the ensuing Quakers drive, Soslow hit his third and final field goal to end the Crimson’s bid to stay afloat in the Ivy League.