By Helen Y. Wu
Harvard Square is a constantly changing environment, but recent increases in rent prices and different shopping patterns have made it harder for smaller local establishments to remain in business alongside national chains.
By Beth Young

This March, b.good was forced to shutter its Harvard Square restaurant to make way for renovations to Harvard’s Smith Campus Center. After nearly 10 years of operating the locally-sourced burger eatery next door to his alma mater, b.good’s co-founder Anthony S. Ackil ’99 said the neighborhood he left behind is markedly different from the one he remembers as an undergraduate.

“When I was [at Harvard], there was not a lot of national chains and now, all of Harvard Square is a national chain,” Ackil said.

Harvard Square is a constantly changing environment, but recent increases in rent prices and different shopping patterns have made it harder for smaller local establishments to remain in business alongside national chains. In addition to the disruption caused by Harvard’s construction in the heart of the Square, the past year has seen a significant change to the face of Harvard Square.

While shop owners acknowledge the mercurial landscape of the Square, recent changes have them anxious for the future.

For Denise A. Jillson, the executive director of the Harvard Square Business Association, local change is a constant. Jillson oversees the organization tasked with promoting the interests of the Square’s businesses, and she said she views the constantly transforming business landscape as a positive.

“The one thing we depend on is change and that’s a good thing,” Jillson said. “That’s the nature of business.” 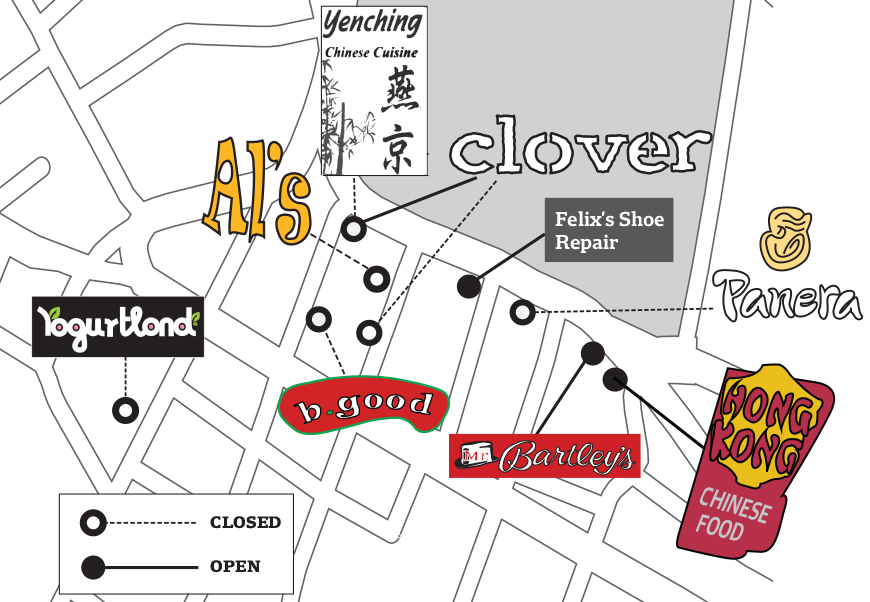 By Brandon A. Wright

Indeed, this year has seen a number of closings and openings. Along with the closing of b.good, Yogurtland, Yenching, Panera, Au Bon Pain, and Al’s Harvard Square Cafe were among those who departed the Square within the past several months. As they close shop, a number of businesses have either recently opened or announced plans to open local establishments such as Sweetgreen, Tom’s Bao Bao, Parsnip, Tatte, and the Capital One Cafe.

Jillson said data indicate that the proportion of locally-owned independent businesses in the Square has remained relatively stable throughout the years, fluctuating between 70 and 75 percent.

Still, local shop owners disputed Jillson’s interpretation of the local business environment. Bill Bartley, the owner of Bartley’s Burger Cottage, a local staple that has been around for more than 50 years, disagreed with Jillson and said few local businesses have been able to sustain themselves over the long term in the Square.

“It’s not even close to 70 percent,” Bartley said. “As far as we’re concerned, there’s only four of us that’s turned over to second-generations.” 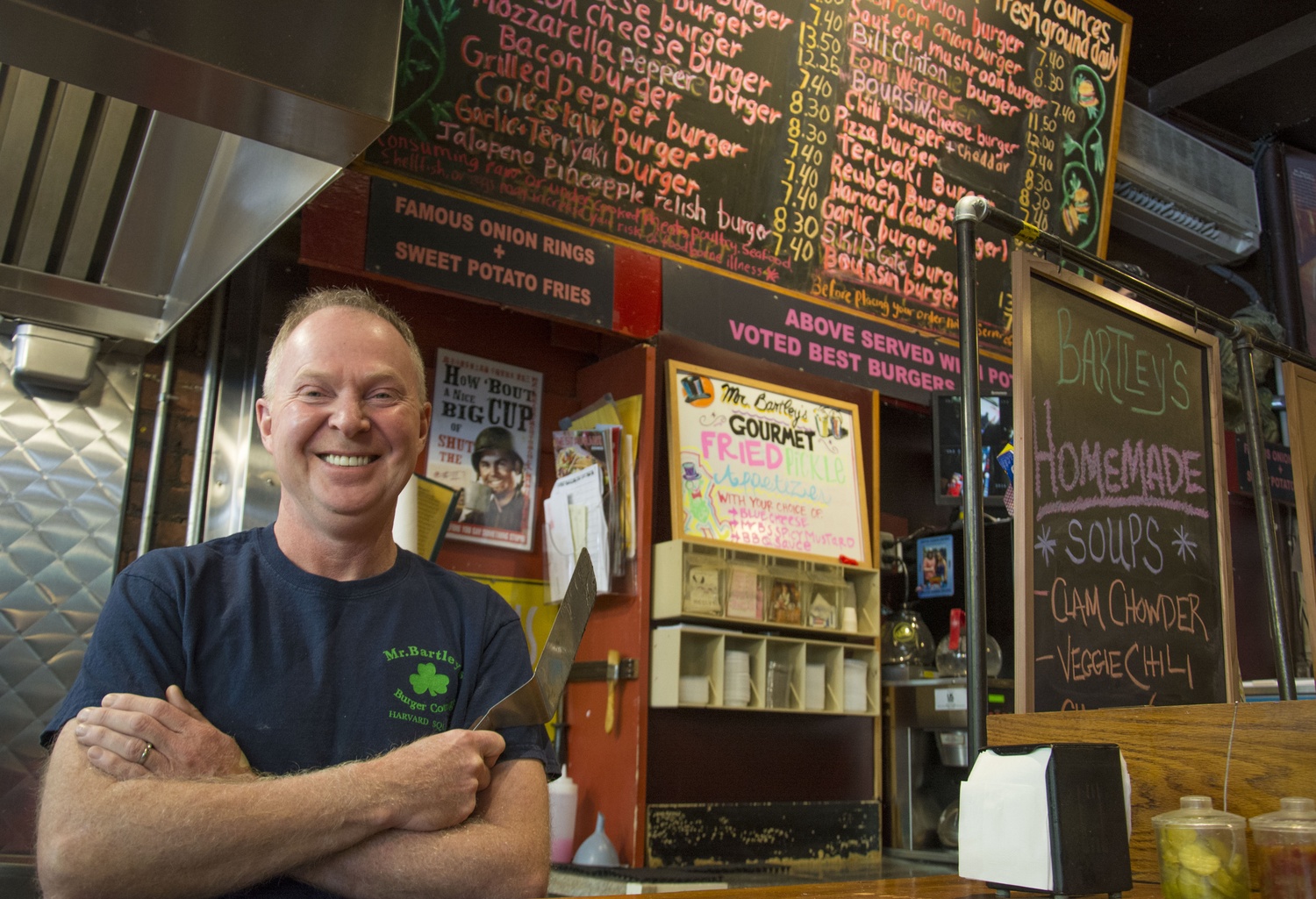 Bill Bartley, owner of Bartley's Burger Cottage, poses in his Massachusetts Avenue restaurant. Bartley's, as the restaurant is affectionately known, has been in Harvard Square for over 50 years. By Sidni M. Frederick

The Square in the past has often been characterized as “eclectic,” and locals have long feared losing that character as national chains move in. Even as Ackil actively plans b.good’s return to Harvard Square, he said the Cambridge hub has lost some of what made it distinct.

For more than 50 years, Christos Soillis has witnessed the change firsthand from behind the counter of Felix’s Shoe Repair. He said that in the last 20 years, only new businesses moving in have been mostly “more big business” like banks and pricey restaurants.

“Small business, they cannot afford to stay in the Square,” Soillis said.

Harvard Square has become a major tourist destination for its cultural offerings and the draw of one of the world’s most famous universities. It has a steady flow of foot traffic, and includes one of the three busiest MBTA stations, so perhaps it is no surprise that rents have skyrocketed in recent years. That increase in rent, along with changing shopping patterns, have led to times for local brick-and-mortar shops.

Ackil said the rent for b.good’s property in the Square increased substantially over the past decade, making it very difficult for local businesses to do well for themselves. 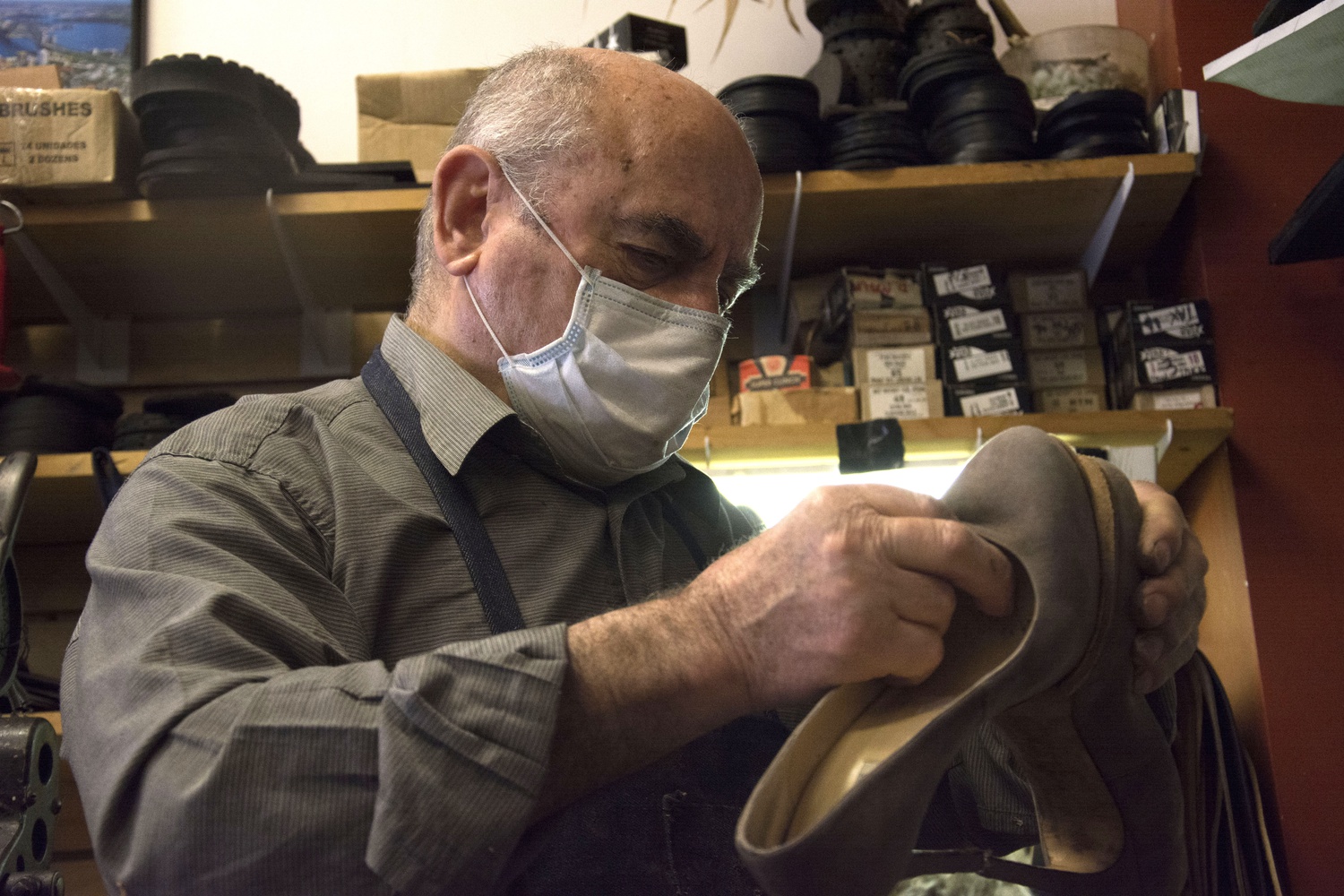 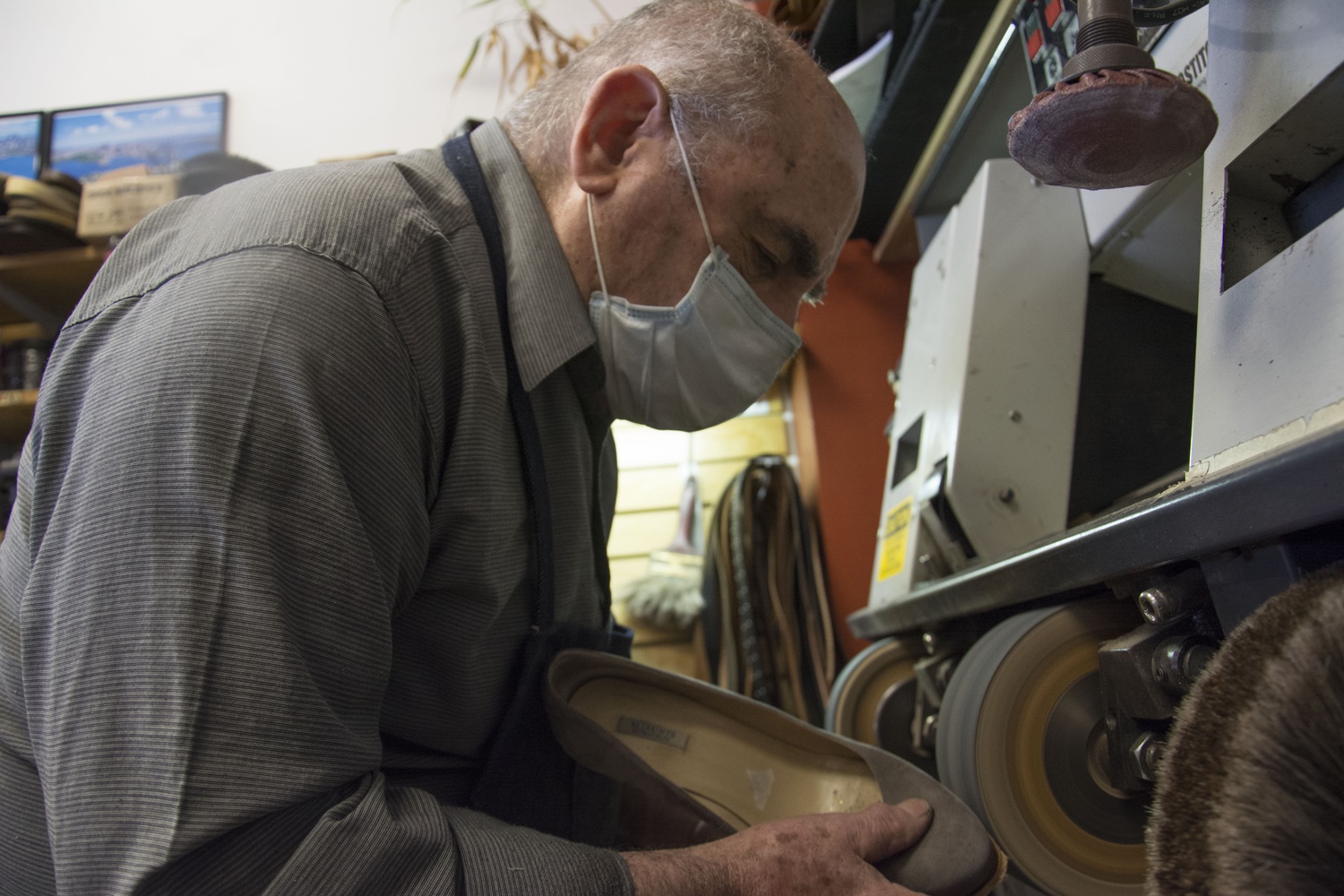 That increase has changed the calculation for which businesses enter Harvard Square. According to Soillis, national chains are established enough to take a risk on the high rent.

“For someone to come into Harvard Square, they probably have to have a good idea of what they’re doing,” Paul Lee, a manager of the 62 years-old Hong Kong Restaurant, said. “It’s going to have to be something that’s more established because the rents might be a little higher in the area.”

Along with rising rents, changing consumer patterns such as online shopping have also hurt local retailers, Bartley said. He said that in the past, people visited the Square for their essentials, and while there would get a meal and make other purchases. Increasingly, he said, shoppers are buying their goods on the Web, which drives out business and has left local shoppers with fewer options.

“Retail is dying a slow death,” Bartley said. “Now [people] go, get in their Uber, go home and order takeout and get it delivered.”

As Harvard Square businesses undergo significant change, store owners say Harvard, as one of the major land owners in the area, will have a significant say in the Square’s future.

Rising rents in the area are market-driven, but it is the landlords who ultimately set the price points. Local shopkeepers have credited Harvard with working to encourage local businesses.

“You certainly don’t see many shoe repairs,” Bartley said regarding Felix’s Shoe Repair. “If Harvard wasn’t the landlord, you wouldn’t see it. It wouldn’t be here.”

Given Harvard’s long history and the important role it plays as a local anchor, Farooq ,the Cambridge official, said Harvard and other established landowners are more deliberate in their real estate decisions than some newer and more commercially-motivated property holders.

“Some of the people who are purchasing now are newer folks who are not so familiar with Harvard Square,” Farooq said. “They are not so much focused on the character or the sense of the place, but much more of a financial investment so that changes who they target for retailers.” 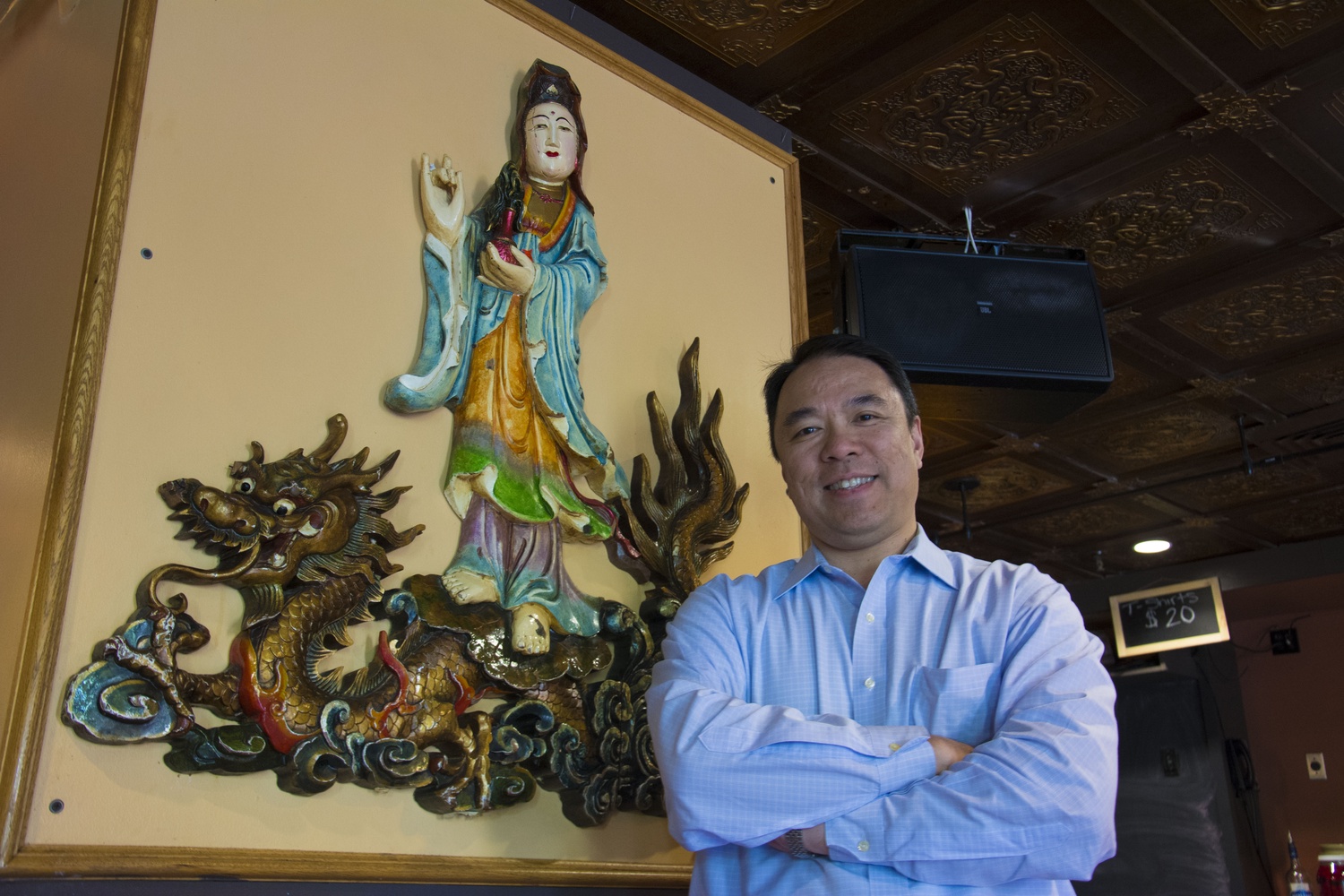 Still, some undergraduates said they feel students are losing out as more national chains move in.

Michael A. Kikukawa ’17 said he felt changes were “being driven by people that are actually eating at these places rather than the people who are living in the Square.” Aaron L. Fogelson ’19, meanwhile, argued for maintaining local options.

“There’s something better about local that’s just like it really represents the school and where you’re from and because of that, you feel more personal with the eating experience,” Fogelson said.

At the end of the day, while local shop owners may be unsure of what the future may bring, they are certain they will need to continue fighting for their spaces.

“It’s not easy. The Square is definitely not easy,” Bartley said.