SLAM Delivers Letter to Faust in Support of HUDS Workers 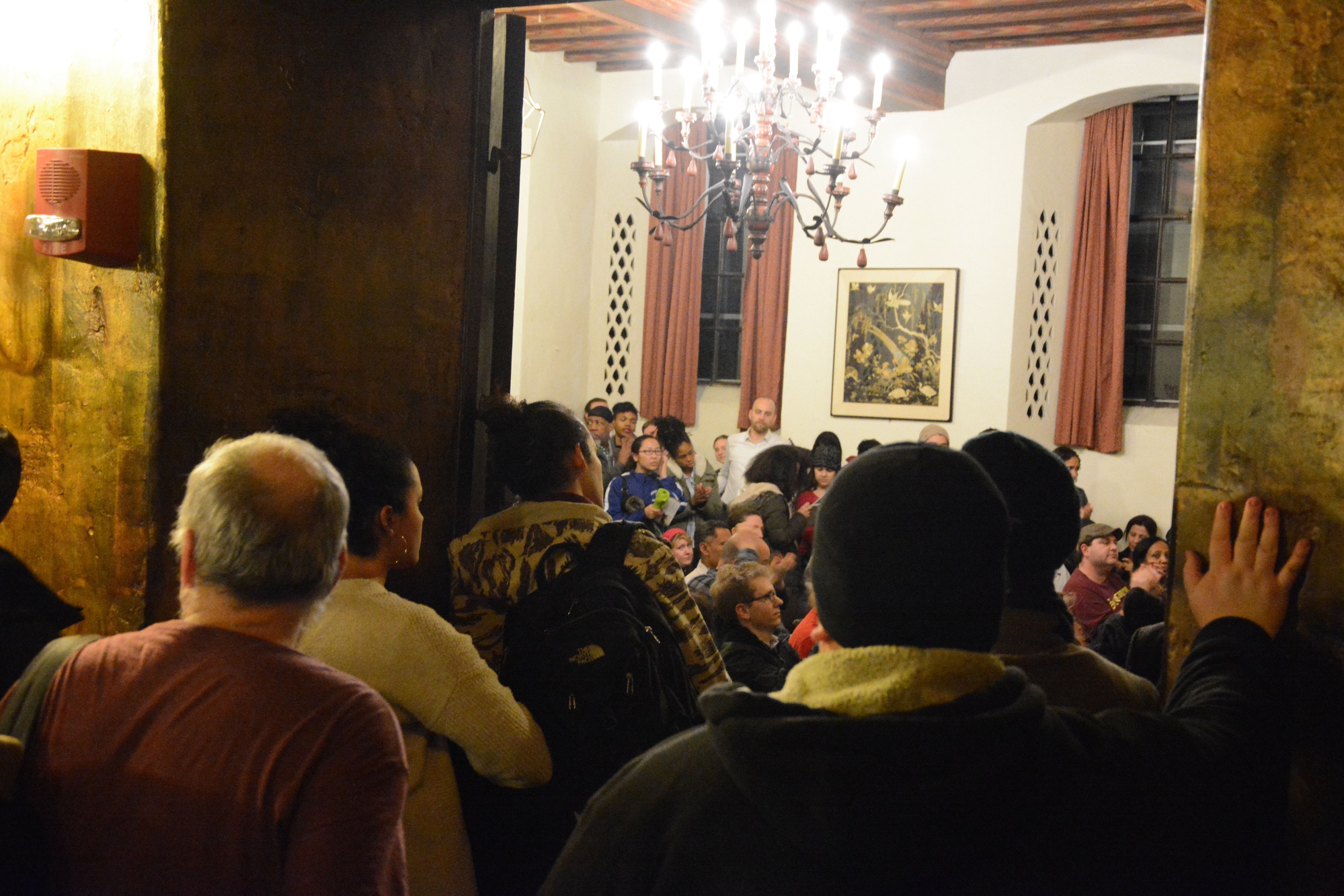 Students and workers line the edges of Adams’ Junior Common Room to protest in support of HUDS workers health care benefits. There was a high turnout at the event, which featured leaders from several Harvard college and graduate student groups.
By Brandon J. Dixon, Crimson Staff Writer 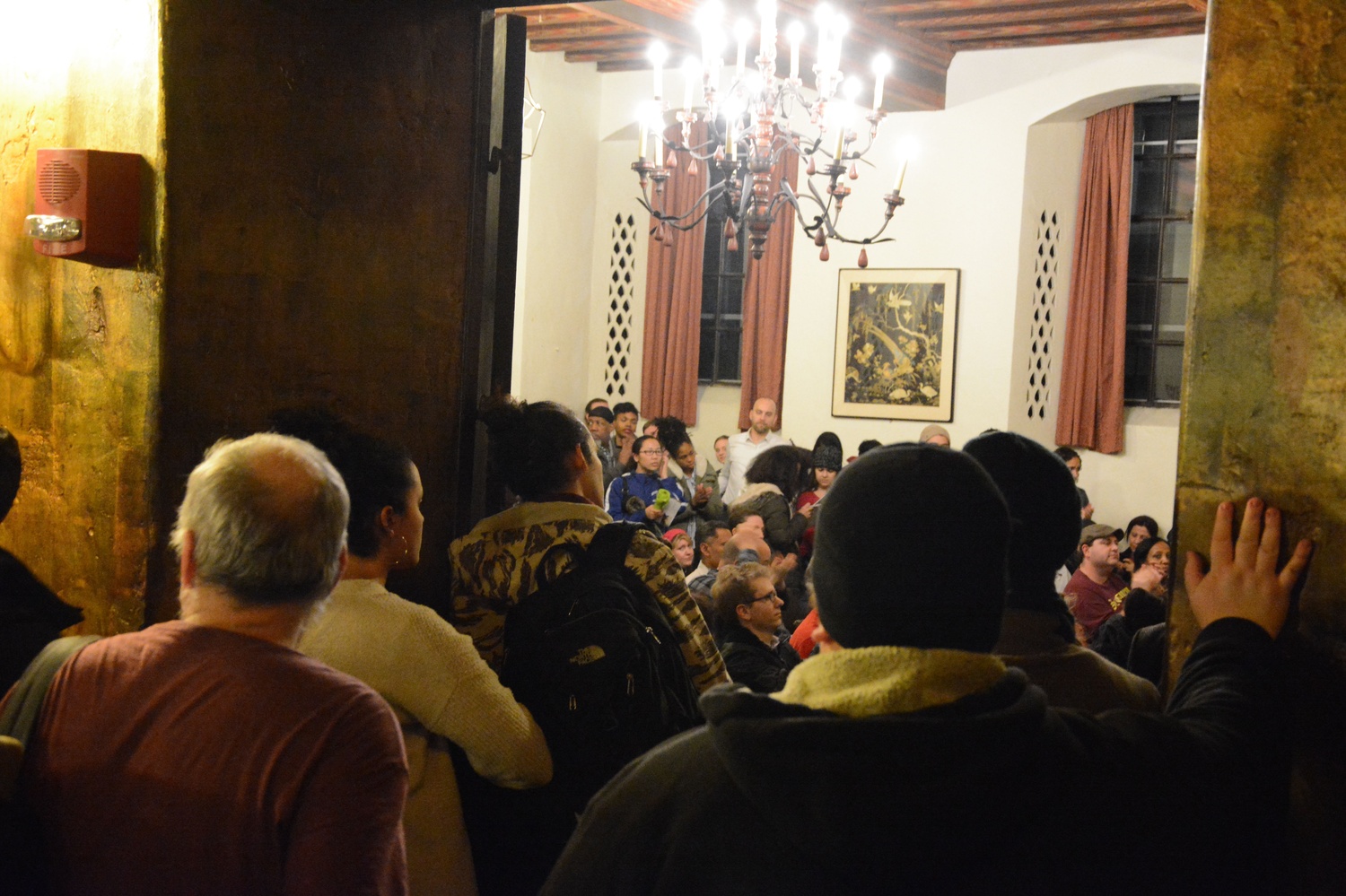 Students and workers lined the edges of Adams' Junior Common Room to protest in support of HUDS workers health care benefits this February. By Jiwon Joung

The letter comes ahead of a round of negotiations between Harvard and its dining services workers set for late spring. The issues on the table include health care and fair labor wages—two points emphasized during recent negotiations between Harvard and its largest employee union. The letter also calls for year-round employment opportunities for dining, security, and janitorial workers.

Gabe G. Hodgkin ’18 and Grace F. Evans ’19—members of the Student Labor Action Movement, an undergraduate organization that has previously hosted events with various Harvard unions—spoke briefly with Faust during her office hours at the Science Center to present the letter. When Faust left the meeting, she encountered a group of about 20 SLAM members, Harvard workers, and union affiliates who were there to support Hodgkin and Evans.

Faust said Harvard is committed to reaching a favorable settlement in the upcoming negotiations that address the “needs of the union and the needs of the University.”

Representatives from organizations across the University—including Reclaim Harvard Law, the College Democrats, and the Graduate student unionization effort—signed the letter and accompanied SLAM when they presented it to Faust. These groups have formed what they describe as a “coalition” that currently supports HUDS workers as they prepare to negotiate their contracts.

A chief concern in the impending negotiations is the topic of health care—an issue that has been controversial at Harvard, most recently in the wake of a health care benefits package that the University extended to its non-union employees. The letter argues that any contract that does not include affordable health care is directly in opposition to “principles of equity and justice” that Harvard embodies.

In fall 2014, Harvard introduced a controversial new health benefits package for its non-union employees, which many professors criticized for its deductibles and coinsurance payments that they argued would burden junior faculty and faculty with families. In August 2015, in response to criticism and discussions with those affected by the plan, Harvard offered an additional plan without deductibles or coinsurance, among other changes.

Specifically referencing the recent mumps outbreak across Harvard, the letter states that “when any member of our community is sick, everyone’s health is at risk.”

This letter is the latest in students’ efforts to change the contract. In February, SLAM hosted an event in Adams House for HUDS workers, drawing a crowd so large that attendees had to cycle in and out of the room to ensure that everyone could hear from the workers.

Edward B. Childs, a HUDS employee stationed at Adams House who said he has been affiliated with Harvard for about 40 years, expressed gratitude for SLAM members’ efforts.