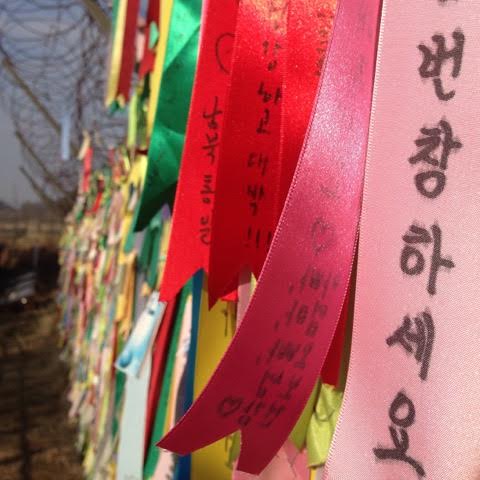 The DMZ is full of contradictions.
By Molly L. Roberts

North Korea welcomes us to the demilitarized zone as only North Korea could: by setting off a nuclear bomb.

North Korea has since attributed the seismic spike in its northeastern region to a successful hydrogen bomb test conducted around the same time on Jan. 6 that our Harvard tour bus pulled into Imjingak on the South Korean side of the border. Experts on the matter beg to differ. They say that the energy output from the test matches up only with the power of an atomic bomb. This in direct contradiction to North Korea’s claims to have moved beyond the modesty of a mere nuclear weapon to the technological terror of the thermonuclear.

Then again, the DMZ is full of contradictions.

First, there’s its name. The demilitarized zone, as it turns out, is the most heavily militarized border in the world. (It also abuts the Democratic People’s Republic of Korea, which is neither democratic nor a republic.)

But there’s more to it than that. When our bus arrives in Imjingak, I expect to see little more than barbed wire and concrete. Instead, I see an amusement park.

The purples, yellows, reds, and blues of swing rides and carousels stand out against the grey sky. A “Super Viking” pirate ship towers over souvenir shops and food stalls. The rides are shuttered, but the shops are open and full of food that would look at home at any Maine fair on Labor Day weekend—plus a bubbling pot of silkworm larvae. “Old Hot Dog,” a sign for one treat advertises. “Eat the Memories.”

Up some stairs, there’s the Freedom Bridge, famous for the repatriated prisoners of war who walked the southerly path home on it. Next to it, hundreds of colorful prayer ribbons hang from a fence. They’re covered in wishes for reunification.

There’s a lot to say about geopolitics here. The war that led to this mess, the peace that ended it. How it’s hardly peace at all, and how other countries will respond to North Korea’s most recent display—not just the nuclear test, but the detention two weeks ago an American college student touring the country for “crimes against the state.” Whether unification is anything more than a pipe dream. Whether, if it’s a real possibility, it will come about through diplomacy or through violence. What consequences the change would bring to both countries’ economies.

But I don’t know much about geopolitics. Mostly, I’m thinking about borders, fences, and walls. I’m thinking about a tired Robert Frost poem my eighth-grade English teacher had us analyze in class, or, rather, analyzed for us. The moral, because there were always morals back then, was that, despite the saying, good fences do not always make good neighbors.

North Korea is not a good neighbor, but that’s probably no fault of the very good fence that is the DMZ. Getting rid of the fence, in fact, only would have negated the need for the “infiltration” tunnels that North Korea tried to dig under it as a backdoor invasion route.

The demilitarized zone itself strikes the same conflicting chords. In front of the official DMZ Pavilion—who knew?—and across from the entrance to the third infiltration tunnel—also turned tourist attraction—the three letters stand tall in textured metal. A crack runs through the M’s right leg. A fake yellow flower sprouts from the gap.

We enter the pavilion and file into a small movie theater. A film starts to play. A disembodied voice begins to narrate the ins and outs of the Korean War with the intense earnestness of a blockbuster voiceover artist. It starts historical but turns propagandistic. Of course, we’re predisposed to agree: The North wages continual aggression against the South. The North is repressive. The North is to blame.

Then, images of war give way to deer prancing and rabbits hopping through the woods—apparently, the DMZ doubles as a wildlife sanctuary full of endangered species (just hope no deer prances onto one of many active landmines still buried in its soil). Small pinwheels, their bright hues reminiscent of the prayer ribbons and theme park rides, spin under the sun. Happy families of four wander through the sites the DMZ has to offer.

The images fade, and so does the talk of the wild and wonderful DMZ. A map of Korea takes their place. It lights up, one half red and one blue. Then, suddenly, the colors give way to a sort of aqua. One day, the narration explains, North and South Korea will come back together as one. The map explodes with sparkles. “Until then,” the voice announces enthusiastically, “the DMZ will live forever!” The screen fades to black.

There it is, in one sentence. The simultaneous celebration and condemnation of the Korean break. On the one hand, both North and South Korea claim to long for unification—they agreed to as much in June of 2000, when both countries signed a declaration vowing to move toward a merger. On the other, the South at least finds beauty in the separation.

North and South Korea say they want to unify. It’s probably more than words, too. Among many in each country, there is a genuine desire to join up as one Korea, but each country wants it on its own terms: democracy for the South, dictatorship for the North. It makes sense. It’s our immediate assumption that together is better than apart. Rifts, political and personal, exist to be mended.

We’ll see. North Korea will keep building bombs. The rest of the world will keep watching. And maybe, someday, the gate on the Freedom bridge will open, the prayers on the ribbons will be answered, and North and South Koreans will simply be Koreans again.

Until then, I suppose, the DMZ will live forever.