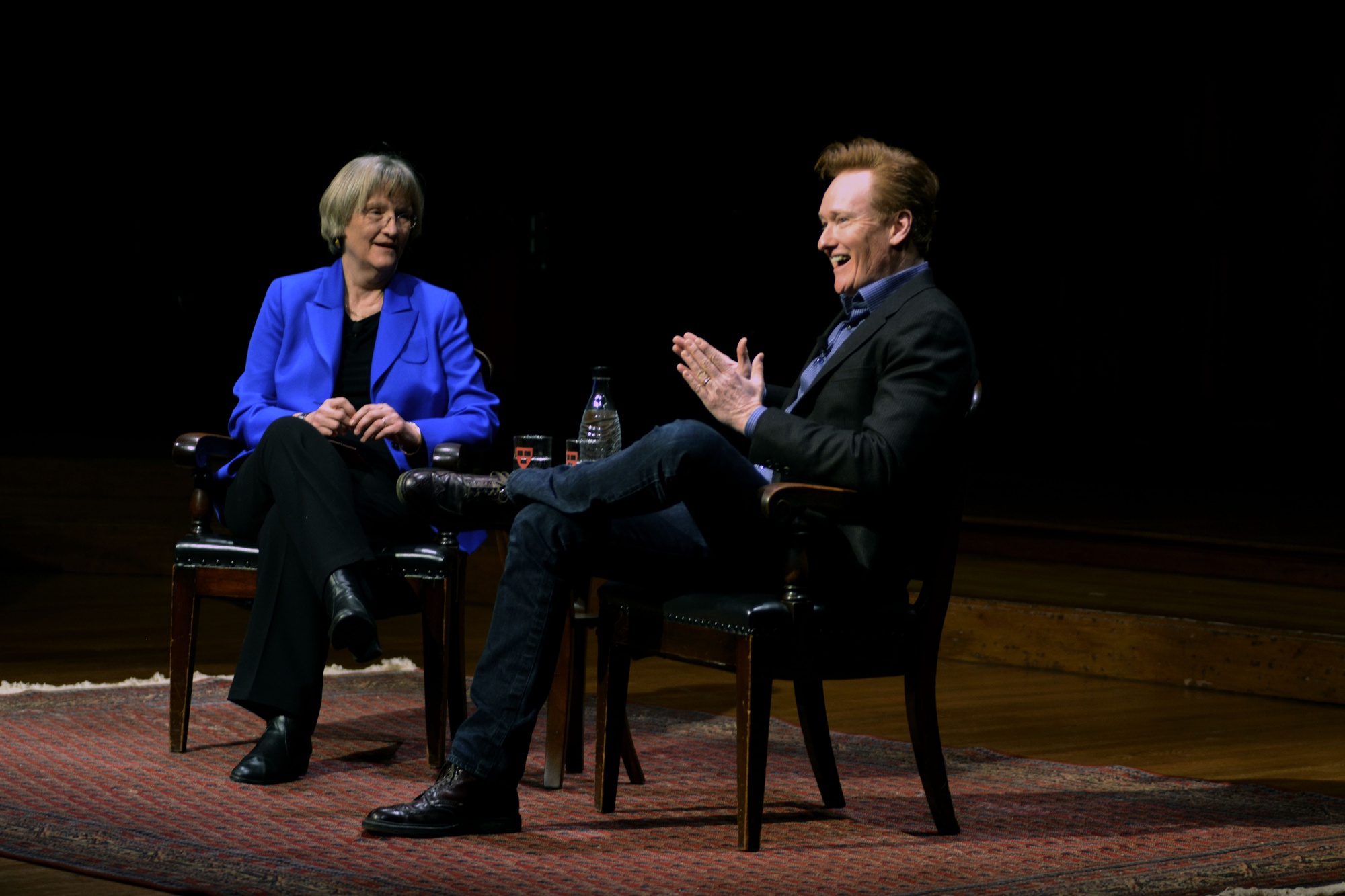 Smoking marijuana with rapper Ice Cube on national television is not a typical resume item for guests invited to speak with University President Drew G. Faust in a packed Sanders Theatre, but Conan C. O’Brien ’85 is not your typical Harvard alumnus. 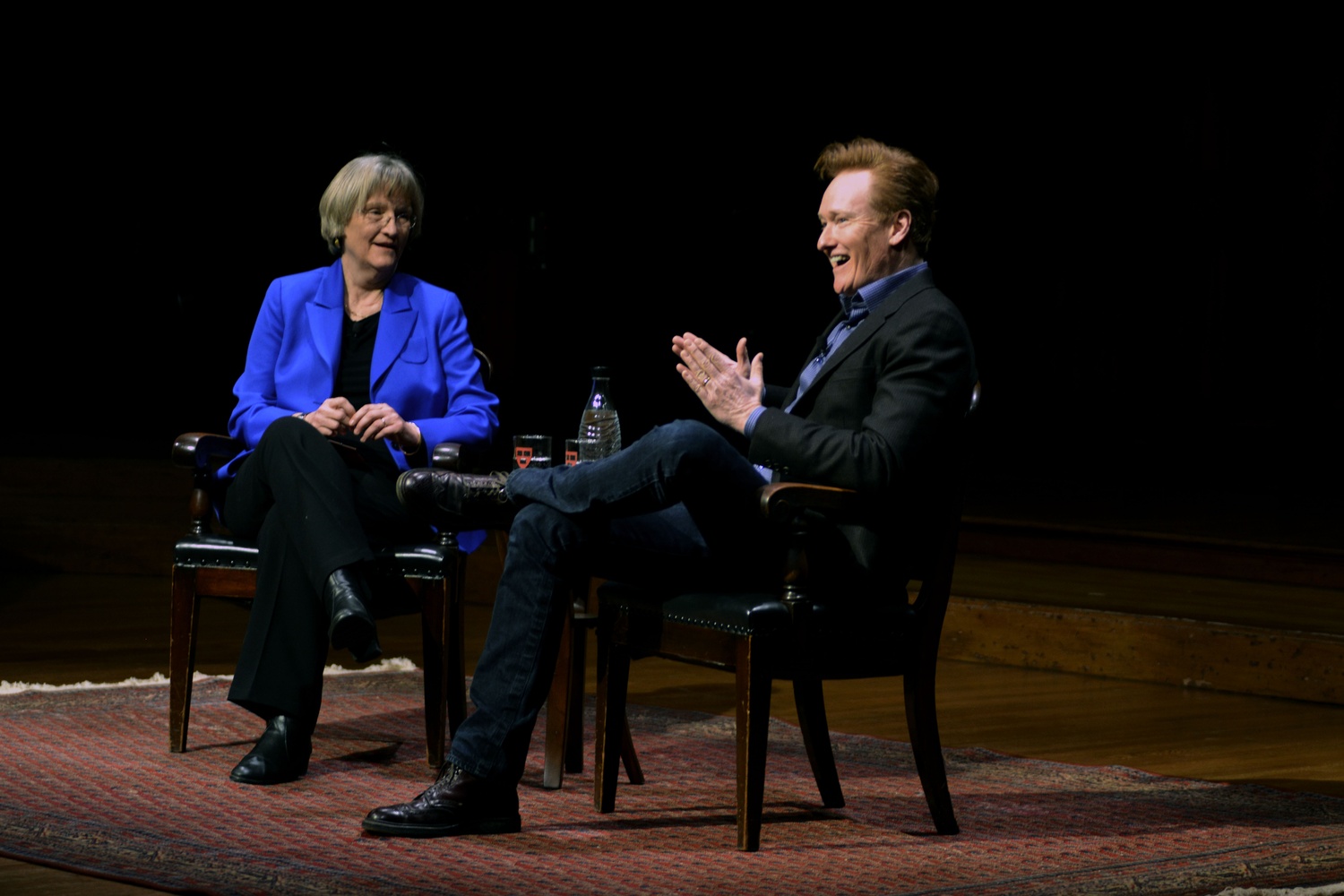 Conan C. O’Brien ‘85 discusses the importance of a liberal arts education with Drew G. Faust on Friday afternoon in Sanders Theatre. By Saul A. Urbina-Johanson

During an afternoon advertised as a “wide-ranging conversation about arts and education,” Faust asked O’Brien what the humanities had done for his career, and the late-night legend responded in turn—but not without sarcasm.

“Absolutely nothing. You should’ve asked me before I came here,” he joked.

Over the next hour and a half, the former Mather House resident captivated hundreds of students with his sometimes honest and sometimes absurd takes on Harvard culture and success in comedy. He discussed how his Harvard years impacted his turbulent, decades-long reign over late night comedy and the unique value of a liberal arts education.

O’Brien acknowledged he was nervous to return to his alma mater, saying he was particularly tormented by senior thesis flashbacks. After Faust said the event with O’Brien had taken a year to plan, O’Brien pretended to imitate an inebriated Faust slurring a plea for the comedian to speak at Harvard, drawing laughter from the audience.

“When I met President Faust in that seedy bar a year ago, she was like ‘you gotta do it,’” he joked.“I was like, ‘President Faust, please, it’s one in the afternoon.’”

But between wisecracks, the Brookline, Mass. native became serious, revealing his anxiety about his experience with Harvard’s moneyed milieu (“You could literally go to Eliot House and everyone was wearing a bow tie and had a falcon on their arm,” he quipped) and the misconception that someone like him—a prominent comedian—had found the key to success in life.

“It’s an illusion that people in my situation have figured something out,” he said. “It’s a constant struggle—you’re insecure in the morning and you feel better about yourself at night, and sometimes that switches.”

A two-term president of the Harvard Lampoon, a semi-secret Sorrento Square social organization that used to occasionally publish a so-called humor magazine, O’Brien said he developed his sense of humor as a “defense mechanism” to diffuse unpleasant situations.

“You’re making your living off something that should probably be treated,” O’Brien said, recalling something his father had said to him about his career in comedy.

While O’Brien continually affirmed the value of the education he received at Harvard, he said in an interview after the public event that the stigma attached to Harvard’s name sometimes posed problems to his career. He told The Crimson that he sometimes worried about being “pre-judged” because of the Harvard name and would occasionally intentionally play down his connection to the school.

“So in the comedy world, Harvard didn’t only not help, there were times when I felt like it hindered,” O’Brien said. “The Lampoon connection obviously helped. I made a lot of great friends, and it changed my life, and it helped me get into comedy.”

After half an hour of conversation, Faust and O’Brien opened the floor to audience questions. Asked about his greatest regret at Harvard, O’Brien said he wished he had not been too intimidated to take Economics 10: “Principles of Economics.”

“That was knowledge that I don’t have, and I’ve always regretted it,” he said before mocking a few audience members who had cheered at the mention of the class. “What a nerd sanctuary in here.”

“So basically I’m your monkey right now. I’m your trained chimp. Will this bring you a small bit of joy?” O’Brien said. He then performed the move.